Now that MLG Raleigh (our video montage here, for those that missed it) has cooled down and MLG Orlando and Providence are coming up (where the hell is 'Providence,' anyway?), we had a chance to sit down and talk with vileSpanishiwa from the StarCraft 2 pro community, who is known for his Zerg strategies (and Ultralisks). Of course, we all know about STBomber's rise to power in Raleigh, but Spanishiwa has been a favorite of ours for months now -- he's a showman, and he's good at it. Below is a brief video interview, which is accompanied by an extended text interview. If you're interested in pro gaming, StarCraft, or going pro, check it out!

GN: First thing's first: we were instructed by your friends to ask you a question about ice cream. If you were an ice cream flavor, what would you be?

Spanishiwa: I dunno, man! I'd have to say mint-chocolate chip. It stays cold the longest.

GN: Do you micro your ice cream?

GN: How many hours per week would you say you spend on StarCraft 2 alone? Counting reading forums, strategies, watching streams, stuff like that.

Spanishiwa: A ridiculously absurd amount, just because I'm always connected to wi-fi browsing reddit or something. I don’t do that secret code word thing – like GL HF HR or something? I missed that joke I think. 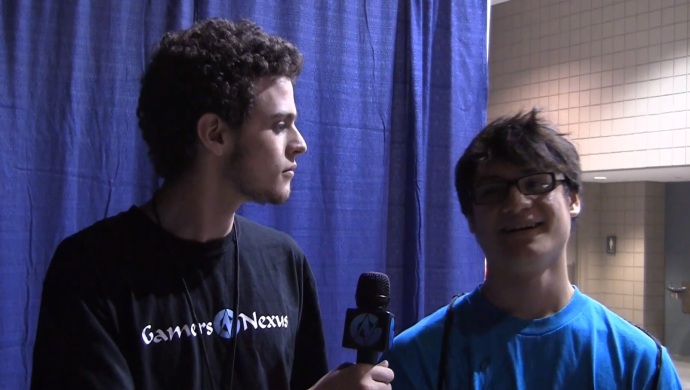 GN: On gl/hf/gg: do you find yourself to be superstitious at all when gaming? Do you feel like saying ‘gl’ will increase your chance of loss?

GN: Do you ever feel intimidated by your opponents? Does this feeling direct the approach taken during matches?

Spanishiwa: Certain ones, and certain match-ups, I’d say so, yeah. My ZvZ is pretty bad, so that worries me. Approach… uhh, if I think I’m better, usually I’ll cheese or switch up my strategy.

GN: Do you normally plan strategies out for show matches ahead of time, or prefer to decide when it’s game time?

Spanishiwa: Oh, yep. You can definitely see that. I’ve played a few show matches so far, and I’ve won each one that I had time to prepare for. It feels sort of underhanded, but everyone can just look up my guide, so…

GN: What is it about ZvZ that makes you feel so uneasy?

Spanishiwa: Right now I don’t understand the match up, but I’m working on it. I feel like it’s reactive race vs. reactive race; so you’re like… reacting to a reaction. There’s this infinite recursion, I don’t know. It just feels weird to me.

GN: Do you think the meta game is important in ZvZ?

Spanishiwa: Hmm… could be. I always feel like I start up a ZvZ, and I’m like: well, I’m going to pick rock, paper, or scissors (early pool, standard/gas pool, hatch first). But that has changed as I have begun to understand them more.

GN: Clearly no one has told you the most OP Zerg strategy out there. Keep this on the down-low: creep tumors. Nothing else. Just make creep tumors.

Spanishiwa: Actually, I don’t like spreading creep in ZvZ. Sometimes it helps if you are on the defensive to keep that creep withdrawn.

GN: What is your favorite race to play against?

Spanishiwa: Protoss. It used to be Terran before the infestor buff, but now everyone uses infestors so Terran expects it. ZvP feels really fun though, because I can go infestors or mutas or whatever I’d like. I feel like there’s some overlap with the baneling/infestor roles, so I never know if I should make banelings or go all infestor or a mix. So far, I just get banelings without speed and only a small amount purely for econ harass; either baneling drops on minerals or preemptively burrowed banelings in mineral lines. I don’t use them that much in actual engagements, just to clear out zealots for my ultra army!

GN: What do you think is the most fun unit in the Zerg armory? Disregard effectiveness and focus only on ‘lulz value.’

Spanishiwa: Hmm… infestor, I’d think. It’s one of the only units that can get you back in the game. There’s nothing more satisfying than having some ridiculous micro battle where you come out slightly behind, but somehow you sneak 2 infestors into your opponent’s mineral line and clear it all out in five seconds.

GN: What do you think is the most entertaining match-up?

Spanishiwa: I like zergling/baneling wars in ZvZ, but I don’t see those too often anymore. I’d say it’s ZvZ, PvP, and TvT ordered from least to most entertaining, just because I like to see micro.

GN: Who has the biggest influence on your play style from within the pro community? What major SC2 icon has been your idol (if any)?

Spanishiwa: IdrA and CatZ. When I first saw CatZ play it was amazing. Seeing him on mrbitter’s 12 weeks with the pros was just tooooo cool. IdrA was always at the top, though, just because I’ve been watching him since beta. He’s just super solid: wins tournaments, has results, play style is less-than optimal, but he pulls it off so mad respect for that.

GN: Have you considered the possibility of “going pro” for a primary source of income? Is that even feasible?

Spanishiwa: No, I don’t think it is, unfortunately. I’m not good enough, that’s alright though – not everyone can be pro. I will keep practicing hard, though.

GN: What do your friends and family think about pro gaming? It’s such a new lifestyle that I’d imagine the reception would be mixed.

Spanishiwa: Friends think it’s cool. I used to always beat ‘em up in 1v1s, so they’re not really surprised that I’ve had as much success as I have. My parents are less than accepting, however – they want the focus on school.

GN: What advice would you give to gamers that are considering following in your footsteps? Is there anything that you’ve learned and could share with our readers?

Spanishiwa: Hmmmm… it definitely takes a lot of practice and a solid plan. Scheduling is a mess, as well. I’d say don’t do it unless you have fun doing it.

GN: Any shout-outs or closing notes?

Our thanks again to vileSpanishiwa! Keep an eye out on this one, guys!