As we tend to do with new game releases – GRID, Titanfall, and Watch_Dogs included – we decided to put Borderlands: The Pre-Sequel through its performance paces. We originally spoke about Borderlands: The Pre-Sequel at PAX, where we got hands-on with the game and discussed gameplay mechanics. Since then, the title has shipped at the now-normal $60 price-tag, complete with the usual nVidia partnership and a basis on Unreal Engine.

In benchmarking the framerate (FPS) performance of Borderlands: The Pre-Sequel, we found that the best video card to play the game really was any video card. You'll see what I mean below. At launch, the most recent drivers from each vendor included 14.9.1 (beta) Catalyst AMD drivers and 344.16 nVidia drivers. 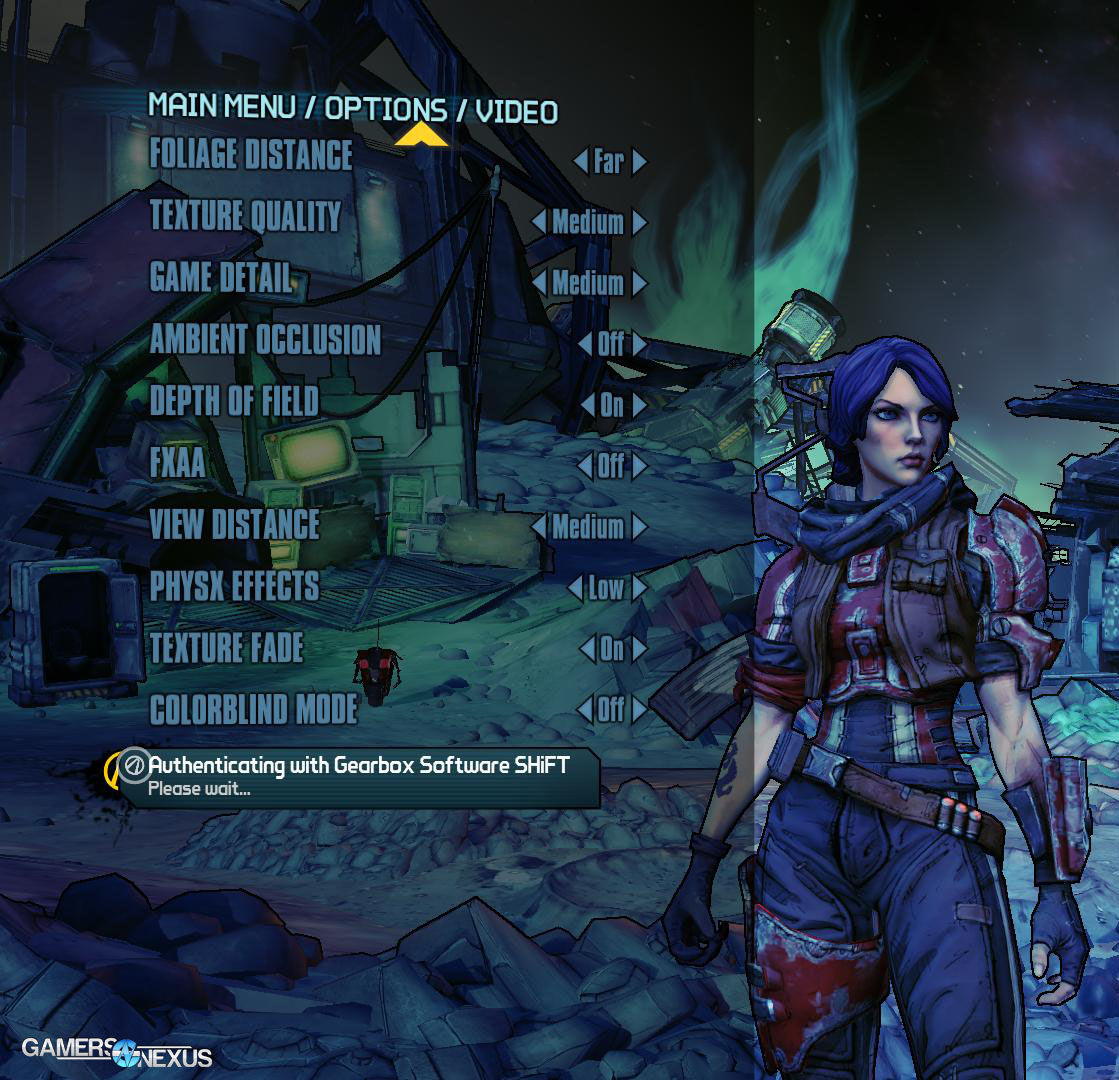 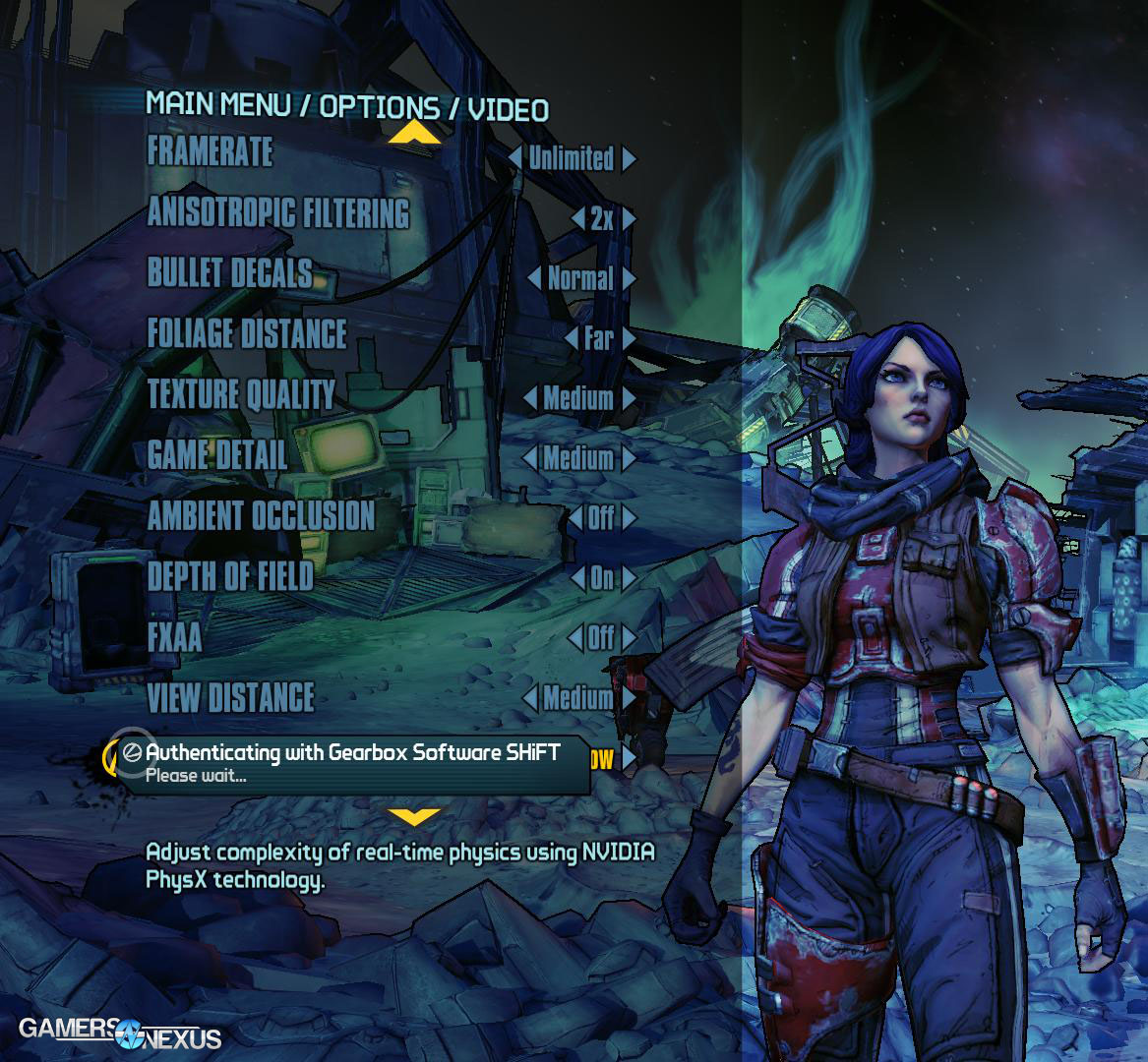 Framerate: The maximum count of frames the user allows to be delivered per second. This can be set to frequency response rates (60, 120, etc.) or “unlimited.” For benchmarking, “unlimited” is a requirement.

Anisotropic Filtering: “AF” is a GPU-intensive form of modifying texture appearance such that “vanishing point” textures are rendered at the highest quality possible. An oblique viewing angle without anisotropic filtering will produce a blurred, aliased texture as it stretches into the horizon; AF helps keep the texture crisp. This ranges from 0 to 16x, with 16x meaning 16 samples are taken per pixel (very GPU intensive, especially as resolution scales). Reducing this will improve performance drastically.

Bullet Decals: The quality of bullet holes and residual impact patterns on surfaces.

Foliage Distance: How far away foliage (plant life) will be rendered. Reducing this will make the world feel tighter, but improve performance marginally.

Texture Quality: The resolution and detail of textures on all game surfaces. A higher setting will improve visual quality, but hinder performance.

Game Detail: The LOD (level of detail) of all game elements and objects. A lower setting will drastically improve performance.

Depth of Field: As with photography, DoF changes how the world is drawn when focusing on different objects in-game. Focusing on something closer will blur the background objects (“bokeh” effect), and vice versa.

FXAA: Fast Approximate Anti-Aliasing first saw a major appearance in Skyrim as one of the quickest, most resource-efficient forms of anti-aliasing. Anti-aliasing smooths colors by sampling every pixel numerous times to determine the correct color, which will then smooth object borders in turn.

View Distance: The physical distance rendered for the player to see. Lowering this setting will drastically improve performance, but diminish the distance of rendering.

We tested Borderlands: The Pre-Sequel on ten video card configurations (one unpublished) with a constant host platform. The Borderlands: Pre-Sequel FPS benchmark was conducted using two different settings within the game: a custom "medium" setting (everything medium, disabled AO, disabled FXAA, AF2x) and a custom "max" setting, where we turned everything to "ultra" (AF16x, low PhysX for equal ground comparison).

All tests were conducted three times for parity, each using a custom BLPS graphics benchmark course. We used FRAPS' benchmark utility for real-time measurement of the framerate, then used FRAFS to analyze the 1% high, 1% low, min, max, and average FPS; FRAFS was further used to dissect the frametime performance of the GPUs, though that will not be covered here (as it is more related to drivers and GPUs than to BLPS). 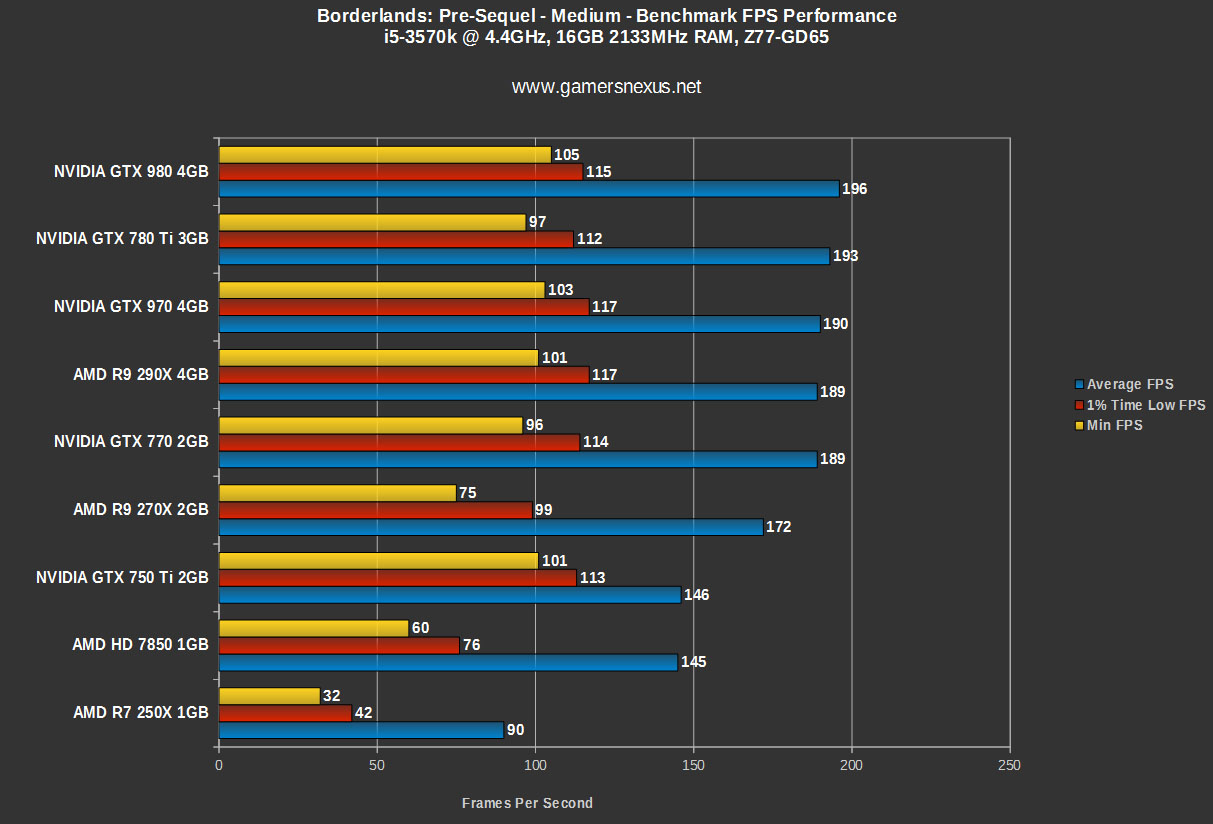 Similar to what we saw with GRID: Autosport, BLPS seems to run on just about any video hardware. On medium settings (above), even the 250X is pushing an average FPS of nearly 100 – more than enough to play. We consider 60FPS to be “playable” for most users, with anything above that just serving as a buffer in times of intense load. If you wanted to be safe and avoid the occasional framerate drops below 60, purchasing a GTX 750 Ti or R7 260X would hold you at or above 60FPS almost constantly.

The 750 Ti ($130) proves itself, again, to be one of the best value video cards on the market. That said, Borderlands could easily be played on the $75 R7 250X with medium-high settings.

Everything above the 270X landed within margin of error. We're probably hitting some other bottleneck at that point – potentially a game software limitation or CPU throttle, given the high FPS. 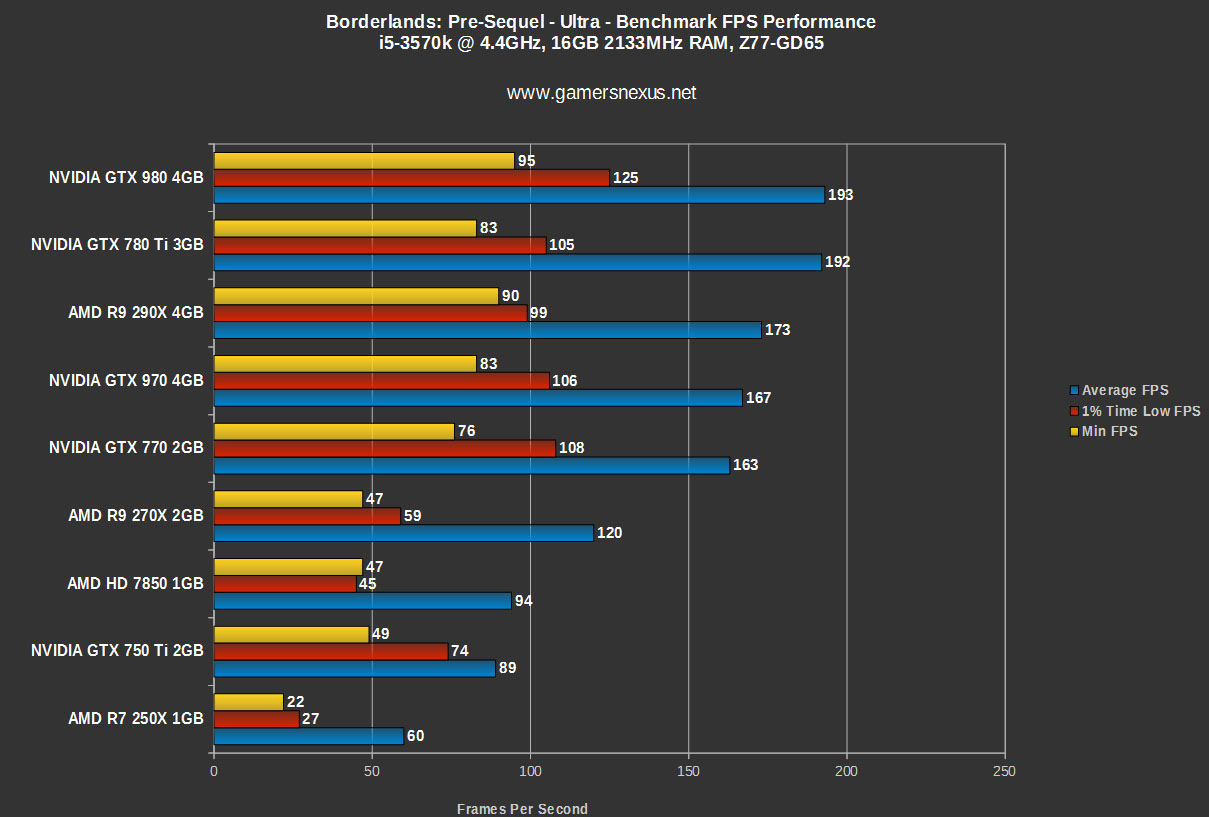 Driving BLPS on ultra (almost max) settings pushes the R7 250X to its limits. 60FPS average is sustainable, but dips to 27FPS noticeably occur 1% of the time. The 750 Ti still carries its weight fairly well on ultra, driving 89FPS average. If you wanted to guarantee max settings (including 16x AF and/or some higher PhysX settings), you'd be best opting for a GTX 760 at $220 right now. If PhysX is unimportant to you, the R9 270X is a solid choice, though the 750 Ti is still the best value.

A Note on SLI

We attempted to run BLPS with 2xGTX 980 GPUs in SLI, but yielded almost identical performance to a single card solution. It is our belief that there are driver optimizations and updates to SLI profiles in the pipeline, in which case this would be corrected.

As previously, note that all tests were conducted on a single monitor at 1080p and 120Hz. For users hoping to drive multiple monitors or 4K resolutions, it's important that you consider higher-end solutions to ensure those pixels are pushed at a high enough FPS to be playable.

Borderlands appears to run on just about anything and seems largely GPU agnostic (no major AMD vs. nVidia disparity), though it will favor nVidia due to partnerships between 2K and the graphics chip manufacturer. Most users will be able to play Borderlands: The Pre-Sequel relatively happily on a 250X or 750 Ti, depending on budget, though users driving higher resolution displays will want to look into the GTX 760, 770, or 970. If AMD is of more interest, it appears that an R9 280 (not shown on the charts above) would play everything fairly well at max settings with multiple monitors.

Let us know if you have any questions!