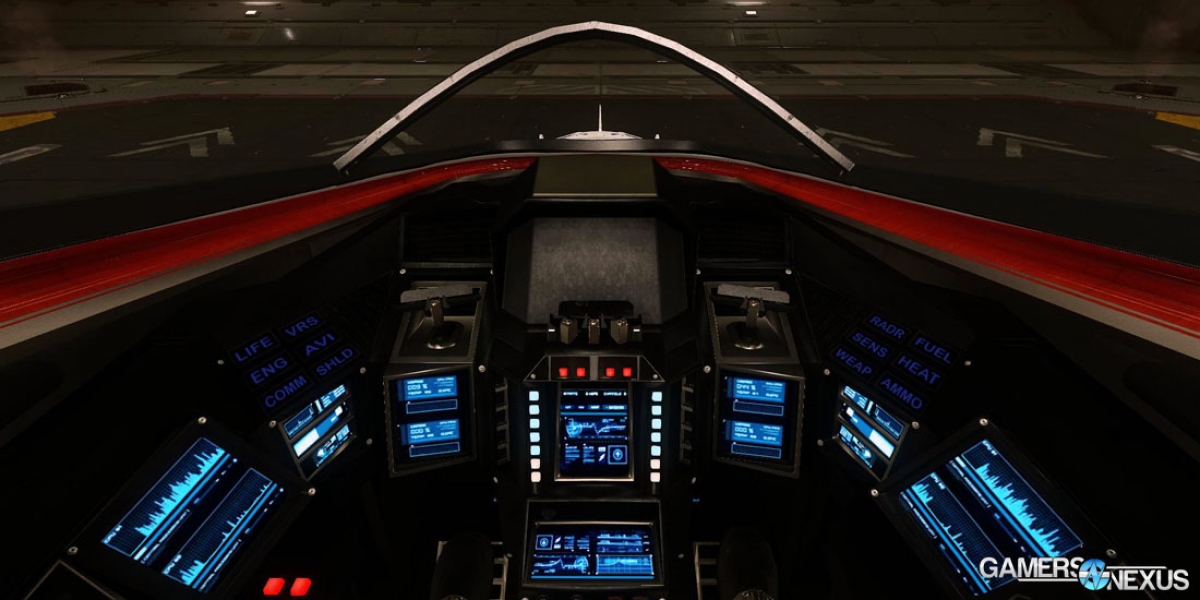 We've worked with Star Citizen's team at nearly every major convention and, as such, it's difficult to list all the related content. Here are a few samples:

The Obvious Disclaimer: No Drivers, No Optimization

Star Citizen is not a complete game. For a great number of reasons, we generally avoid benchmarking an incomplete product; the tremendous interest behind Star Citizen and the number of times we're asked if “my computer can play Star Citizen” means that we make an exception. Even excepting the game to the rule, the same disclaimers apply.

An incomplete game means a couple critical items are absent. Drivers are the main one – AMD and nVidia (and Intel, to some extent) go through great efforts to prepare drivers that bolster performance for specific games. Each major game release sees a driver update (see: GTA V, Witcher 3). The hardware vendors tune their technology to better render graphics for each game, and this can create profound performance gains from one driver set to the next. Because Star Citizen isn't done, there are no game-specific drivers that improve its performance. The game runs with effectively no hardware-side optimization as it stands now.

Then there's the development side of the coin. Without software-side optimization performed by the game developer, graphics will run at full bore and could beat-down hardware in a manner which is not representative of the final product. Star Citizen currently has one quality setting with only four options (low, medium, high, very high). It is highly likely that the end product will offer a more detailed options page in the menus, but for now, we have limited control and CIG has performed minimal tuning.

All this is to make it abundantly clear that these tests are not representative of the final product. They might not even represent performance in the next patch. These tests strictly represent the game in its present state, and should help determine whether systems will play it as is at this moment. As the game iterates and drivers ship, it is almost a guarantee that performance will increase. That stated, the art assets also aren't final and could impact performance in either direction.

The latest GeForce 353.3 drivers were used during testing. AMD Catalyst 15.15 was used for the 300 & Fury series cards, with 15.5 used for 200 series cards; 15.6 was not functional at the time of testing. Game settings were manually controlled for the DUT.

VRAM utilization was measured using AIDA64 and then validated with MSI's Afterburner and GPU-Z. FPS measurements were taken using FRAPS and then analyzed in a spreadsheet.

Each game was tested for 30 seconds in an identical scenario on the two cards, then repeated for parity. We strictly tested the hangar for this Star Citizen benchmark. Flight was tested briefly and proved significantly more framerate friendly due to the nature of reduced polygon density; given time constraints, we opted to only test the most intensive aspect of the game. As of now, the racing and battle sim aspects are less intensive. These benchmarks are not linearly comparable to our previous benchmarks because we changed our course methodology.

Some performance exhibits anomalies resultant of the incomplete product and drivers. AMD's R9 285, for example, underperforms considerably even compared to weaker AMD devices. The R9 380 – effectively an R9 285 – performs better than the R9 285 counterpart.

We also see the GTX 780 Ti outperforming the 980 and 980 Ti (and Titan X), something that is not consistent with any of our other tests; this suggests that Star Citizen is presently seeking raw horsepower over anything else. Maxwell's memory optimizations will likely yield superior performance in the final leg of development, but for now, the 780 Ti's raw power from Kepler puts it ahead.

As another example, the brand new Fury X barely outperforms the GTX 770 – something that is far from the truth in nearly any other game we've tested.

We attempted one SLI configuration (2x 980 Ti) and one CrossFire configuration (2x Fury X) with no luck. In both instances, Star Citizen operated at effectively the same framerate as a single card for either of those configs. 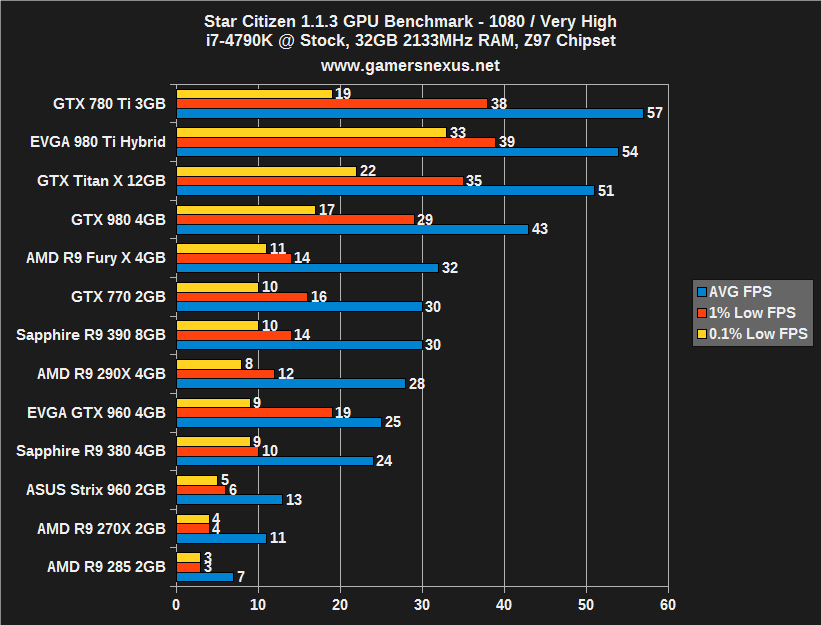 At 1080p with Very High settings, Star Citizen proves difficult to play with any of the hardware tested. The 780 Ti produces a better framerate than even the Titan X – something that won't happen with finalized content. The 980 Ti Hybrid's performance gain over the Titan X is actually consistent with our testing, though, and is a result of the bolstered clockrate on the Hybrid version of the 980 Ti.

AMD's first card to appear on the chart is the Fury X, with just 32FPS. It is possible that CIG has performed more nVidia optimizations at this point, though we're unsure of the root cause for the unreasonably low performance.

1080p / Medium is more playable. Everything from the 290X and upward sits at a decent FPS, though the 770 and 960 are tolerable at these framerates given the hangar's lack of accuracy-dependent gameplay. 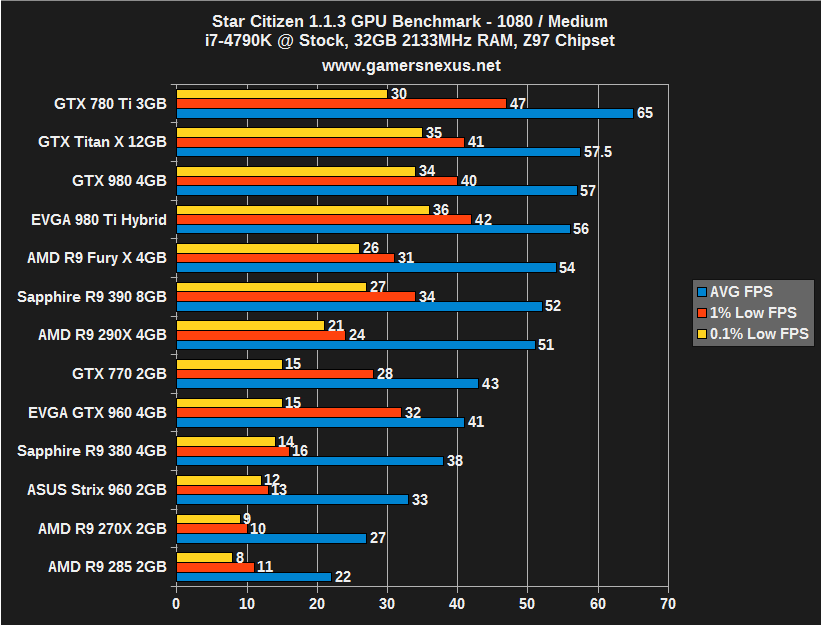 For the most part, there's a small performance gain in low vs. medium. Observe the two 960 cards (EVGA 4GB, ASUS 2GB) carefully, though, and it becomes clear that video memory is bottlenecking performance at higher quality settings. 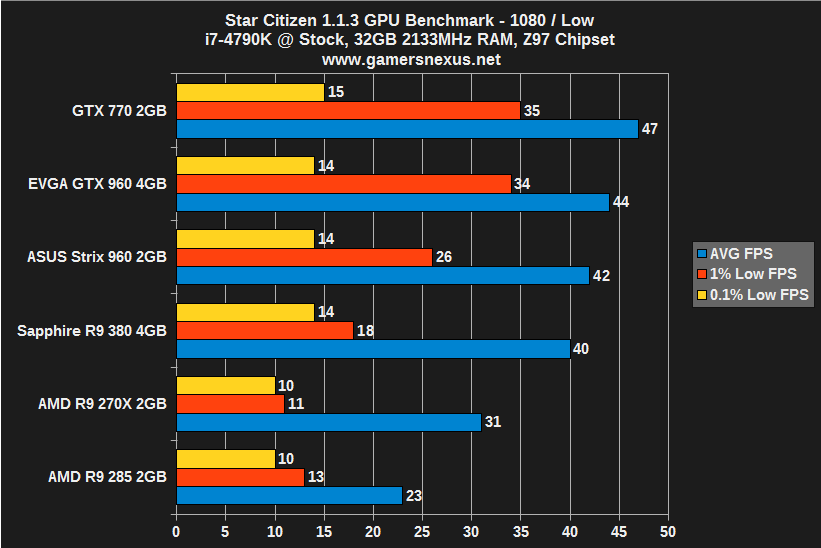 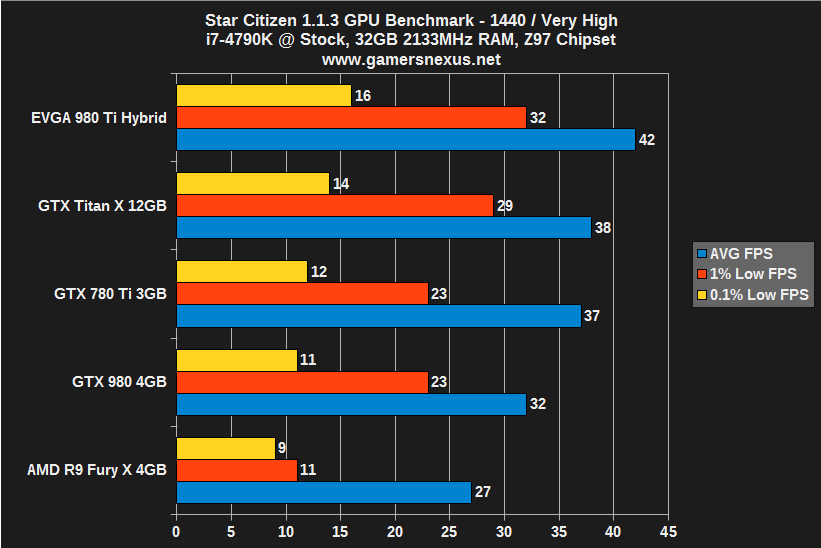 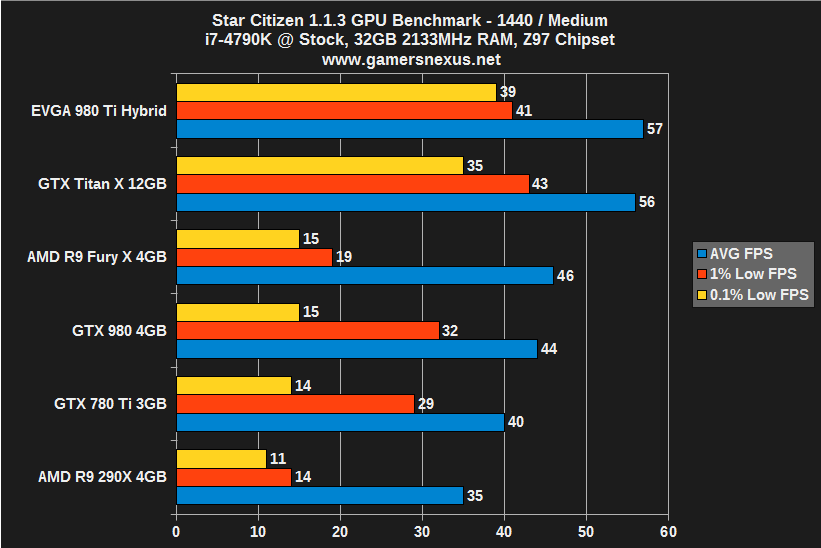 4K is effectively unplayable at this time. Users of 4K displays would be better off dropping to a lower resolution while retaining higher quality settings.

We logged system memory consumption at 4637MB peak (this is a delta value – we subtract the background process memory consumption from this measurement, isolating Star Citizen). This was extracted from a 20-minute gameplay session at Very High / 1080p.

VRAM consumption exceeded 4GB at all times when using the Titan X, which hosts 12GB of VRAM. This allows us to see the amount of memory consumed without limitation from the hardware. There is a measurable difference from “low” to “very high” of 600MB.

We normally publish benchmarks with a great deal of confidence, feeling certain that our results are representative of the whole. In this instance, given the unfinished state of the game and lack of driver support, it is possible that performance could vary greatly on other configurations. We were unable to get CrossFire or SLI functional, but we also only tested two high-end configurations – if you've gotten it working, let us know your setup below.

As it stands now, Star Citizen requires a serious amount of graphics processing power to operate at playable framerates with high settings. Anomalous output in some instances confirms the lack of optimization, as shown most obviously when switching between the 285 and 380 – two effectively identical GPUs with disparate performance. One thing that is clear, though, is Star Citizen's consumption of video memory. There is a clear advantage afforded to video cards with greater than 2GB of VRAM; the 2GB vs. 4GB GTX 960 test illustrates this, especially when looking at the jumps between 'low' and 'medium' settings.

We'll continue to update with new benchmarks as the game makes progress.