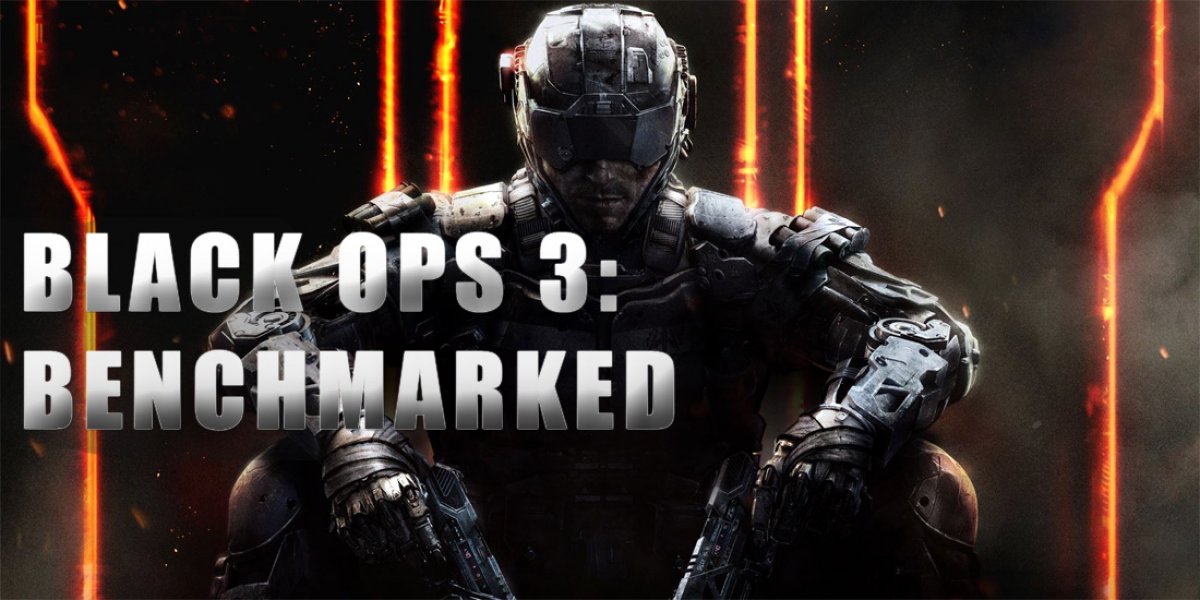 Some games are more forgiving of lower framerates. Skyrim, for instance, is acceptable even at 40FPS with thanks to its slower, less precision-honed playstyle. For Black Ops 3, having tight 1% and 0.1% times with the average is of significant value to gameplay, as is a near-constant 60FPS+ framerate. The game also seems to tie some form of mouse acceleration / smoothing / spurious motion to the framerate (not yet confirmed, more testing required), and this appears to be resolved by locking the FPS to more achievable numbers – like 60. For BLOPS III, we'd really recommend that folks aim for 60+ in the framerate department.

We noticed, critically, that framerate varies massively in Call of Duty: Black Ops 3, depending on what you're playing. We tested singleplayer, free-running, multiplayer (with and without other players present), the ready room, and more. Singleplayer exhibited drastically lower FPS than multiplayer in some of the first level's scenes. We did not proceed beyond the first level. In that first run-through, though, we saw averaged framerates dip as much as 38.6% lower than averaged multiplayer framerates. We spent about an hour testing various multiplayer maps in various locations, ultimately settling on “Redwood” as the most intensive multiplayer map given the correct bench path. We decided to forgo campaign testing in favor of multiplayer map testing as it seemed more true to the series' focus. Note that our tests eliminated the variable of combat and enemies by using custom game creation tools.

Once we moved to SLI testing at 4K, we observed severe frame drops that seemed uncharacteristic of the graphics hardware used for testing. To conduct further analysis, we ran resource monitoring tools (including the built-in resmon) to check system memory usage. This is what we found: 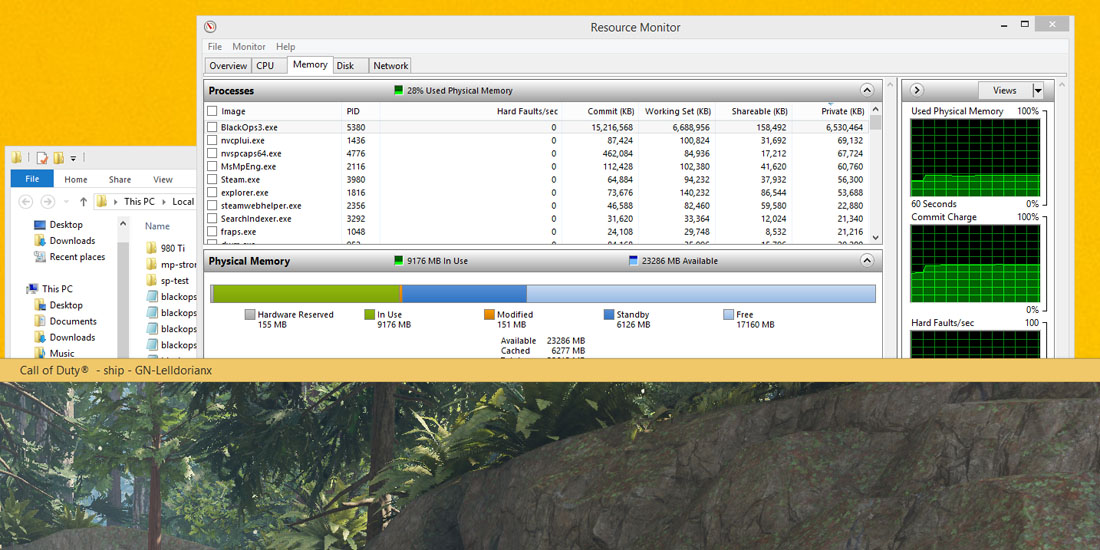 At 4K/max, Black Ops 3 had committed 15.2GB of RAM, with a working set of ~6.7GB. That 6.7GB working set accounts for physical memory consumption without page fault; the 15.2GB number represents the virtual memory consumption (pageable address space). This isn't much better at other setting levels, but it is a bit better – we saw closer to 11GB commit size during some of our 1080p tests. Either way, it's clear that safety dictates an 8GB physical memory allowance for Black Ops.

We saw a full saturation of the GPU's on-card memory when running 4k/max on a 980 Ti – that's ~6GB VRAM tapped into.

As a preliminary test to our forthcoming settings optimization guide, we ran some initial test passes on Filmic anti-aliasing and its impact on performance. Our findings, from a few test passes, are below: 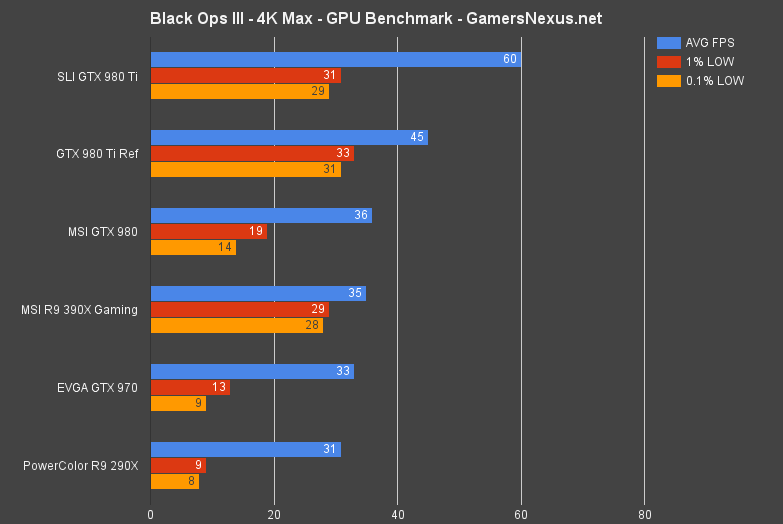 Surprise: 4K is intensive and still effectively a fantasy. Short of opting-in to multiple high-end GPUs, like 2x 980 Tis, a ~$1300 purchase, it's just not feasible to max-out 4K. Lower settings configurations are doable, but it may be better to just dip to 1440p for this one.

We noticed large frame hits under this configuration due to BLOPS' tendency to gulp system RAM insatiably, jumping from 10GB commit to 15GB commit with little warning. This issue dissipates as the game finishes streaming-in whatever it's currently rendering to the screen. 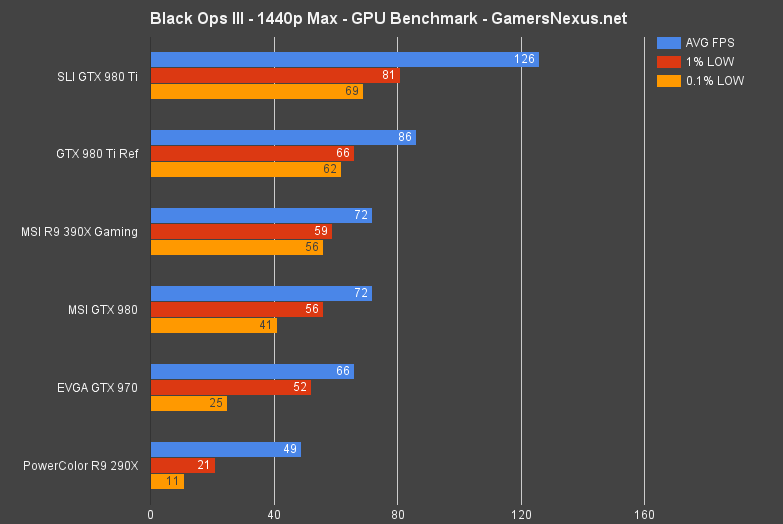 The heir apparent to 1080p, 1440p proves demanding enough that anything shy of a GTX 970 or R9 390 (not present) would require lower settings to meet the 2560x1440 screen resolution. The R9 290X could achieve a higher framerate with some tuning – like dropping settings down to medium – but it's not much use at 1440p/max. 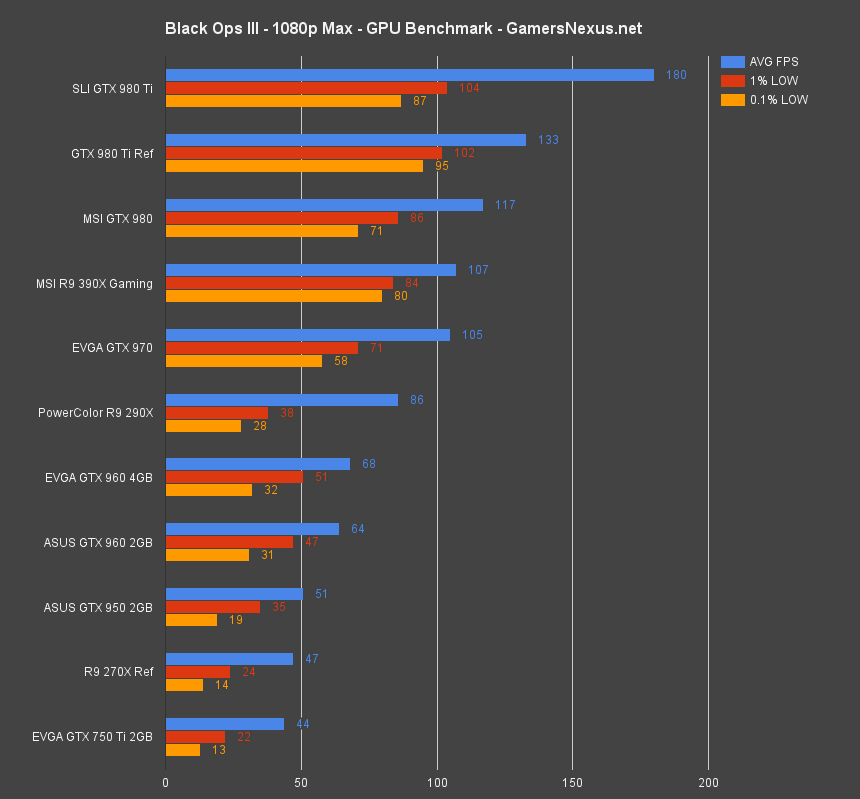 This is likely the test that most users are seeking. Running Black Ops III at 1080p, max settings, we see the SLI GTX 980 Tis unsurprisingly leading by large margins. The 1% and 0.1% low frametimes of the SLI configuration fronts a larger disparity against its average than other cards, but brushes it aside with raw FPS output. Moving to more reasonable configurations, we see a single 980 Ti reference running at 133FPS average and with tight low timings.

Note: The 285 was removed from our 1080p bench as it encountered issues which produced unplayable framerates. We are researching the root-cause of this issue in an attempt to determine whether it is a problem with Black Ops or the AMD driver. 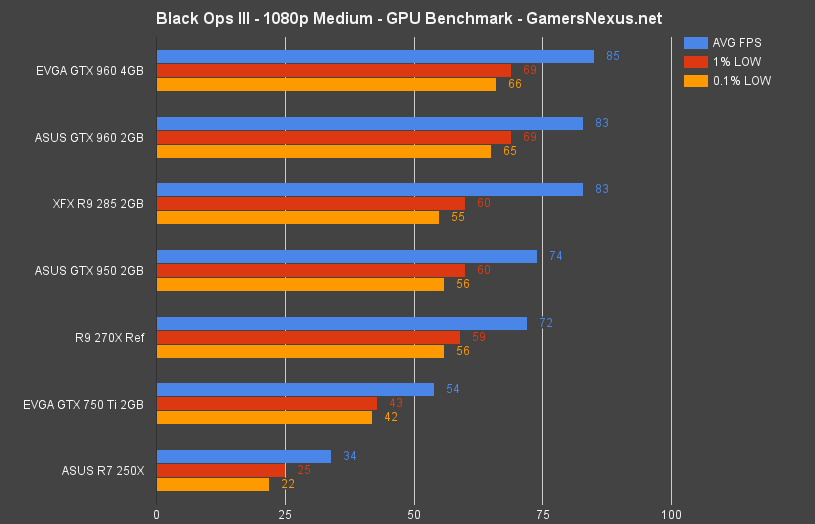 Just to cover the low-end bases, we ran a few tests with medium tests and AA disabled. These were all done at 1080p.

For 1080p at max with a 60FPS average, Black Ops 3 is most friendly with the $225 GTX 960s – which see a slight 4GB advantage vs. 2GB, but not much. We unfortunately lack the $210 R9 380, but it would also fall within this range, based on our previous tests with the card. We have 380 series devices coming to the lab in mid-November and will perform a full suite then. If making more room for frame hits and seeking higher low metrics, the target moves to the GTX 970, which is potentially of interest to users on 120Hz displays with its higher framerate. Disabling anti-aliasing and dropping settings from “Extra” to “High” would produce an FPS close to 120.