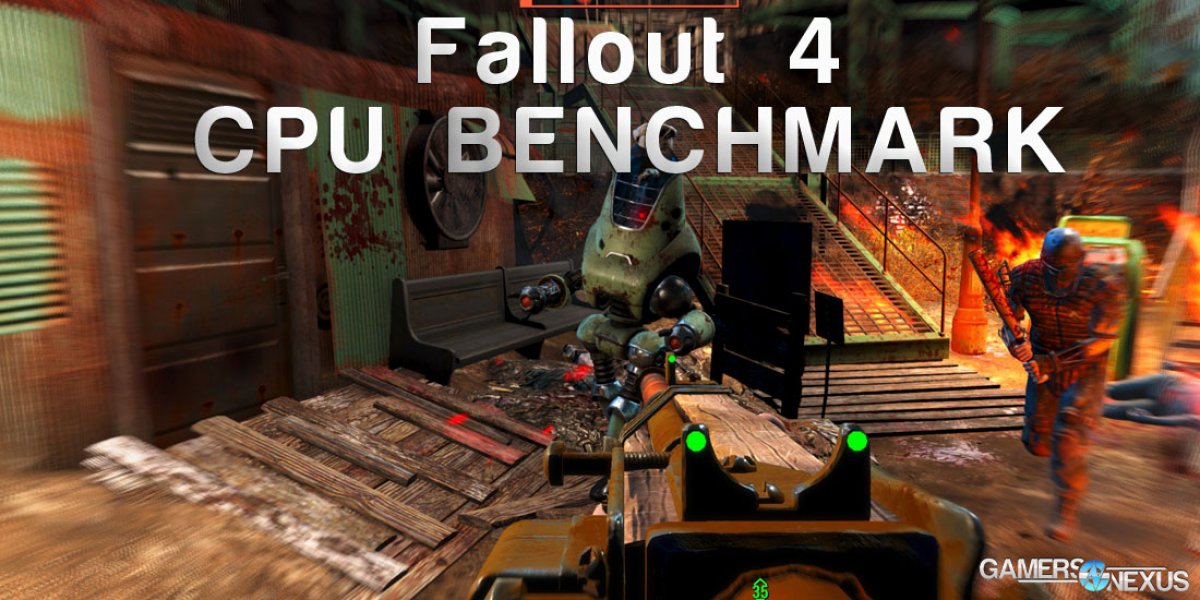 NVidia's unreleased Fallout 4 drivers were used for testing, including the Fallout 4 optimizations. We tested using our best single-GPU available, the EVGA GTX 980 Ti Hybrid. The objective was to reduce GPU bottlenecking as much as possible to present the absolute performance difference between the CPUs.

Game settings were configured to "Ultra" with “ultra” overrides where not selected (1080, 1440) and "Medium" (1080). Once we determined which settings provided a reasonable level of load for appropriate video cards, we forged forward testing those configurations on our suite of CPUs.

The below CPUs were tested:

The following game settings were used in testing CPU performance:

Benchmarks aren't possible with locked framerates. In order to accurately benchmark absolute performance values of video cards and CPUs, we disable all frame-rate locking technologies during testing. That includes G-Sync and FreeSync, V-Sync, and whatever else lies under the hood of the game. In Fallout 4, we had to navigate to \documents\my games\fallout 4\Fallout4Prefs.ini and set iPresentInterval to 0. This disables the framerate cap and, consequently, seems to eliminate spurious mouse behavior.

This file gets overwritten immediately upon launching the game again, though, so anyone borrowing our methodology to bench will need to set the file to read only. There is a custom preferences file that I'd imagine should act as an override to the core .ini file, but I'm not presently sure how to use it, so we went with the read-only method.

Because of the way physics and game-time are joint at the hip to FPS, it is generally recommended to keep the 60FPS cap for actual gameplay (rather than just benchmarking).

Going in to this benchmark, we expected to see negligible performance impact when switching to a 4690K or 6600K from the i7 flagships, like the 4790K. It was our expectation that performance would be in a few frames of each other on the i5 and i7 CPUs. We also expected that the i3 would be bottlenecking the GPU, given its thread limitations and slower operating frequency, but were genuinely unsure of what to expect in terms of percent impact versus the i5 CPUs. That's what testing's for. 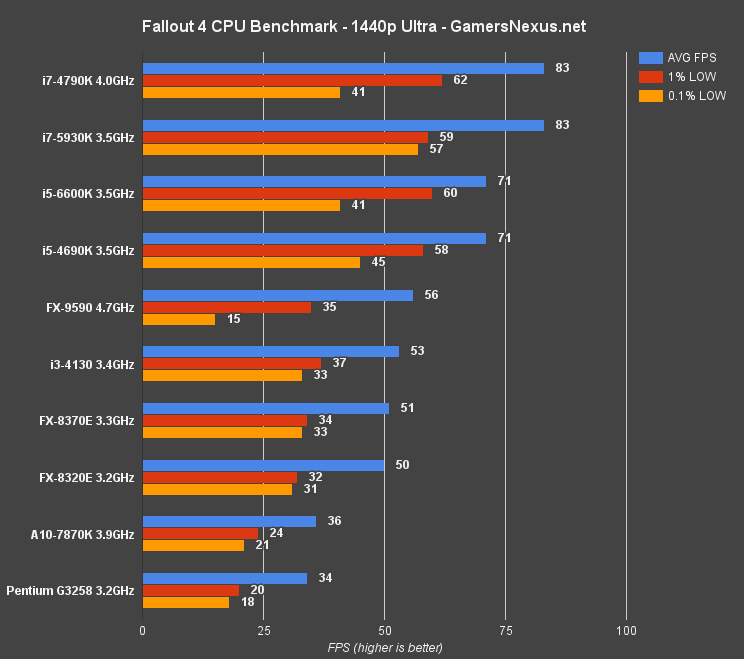 1440p at Ultra limits us to an FPS output of ~83FPS (GPU limitation between the two i7 CPUs) on the 4790K and 5930K. Moving down to the i5 CPUs, like the 6600K and 4690K, framerate drops a considerable 15.58%, but remains above 60FPS – and that's all that really matters, considering Fallout's FPS-to-gametime tie-in that prohibits reliable >60FPS playback for anything other than benchmarking. Now, once you change the GPU from the 980 Ti Hybrid to something else, this 15.58% delta could come into play a lot more – so keep the GPU choice in mind when looking at these charts.

The FX-9590 technically plays 1440p/ultra, but we faced severe frame drops and stuttering with the CPU, a trait characteristic of the 9590's high TDP. We've also found this to be true in some other games, so this is not a unique issue to Fallout 4 with the 9590. The frame drops are severe enough that we'd drop down to a lower setting, were we to actually play the game with this CPU.

The i3 falls far from the i7 starting point, dropping 44.1% against the i7 and 29% against the i5. At 1440p, then, we see nearly a 30% performance advantage awarded to the i5 CPUs (Skylake & Haswell) over the i3 Haswell CPU. The 5930K exhibits stronger low frametimes than its not-Extreme cousins.

Once moving into the power efficient 8370E and 8320E, we've fallen so far in framerate that we've landed below 60FPS. This shows just how substantial an impact the CPU has in Fallout 4, and not because of anything resembling masterful CPU or thread utilization. 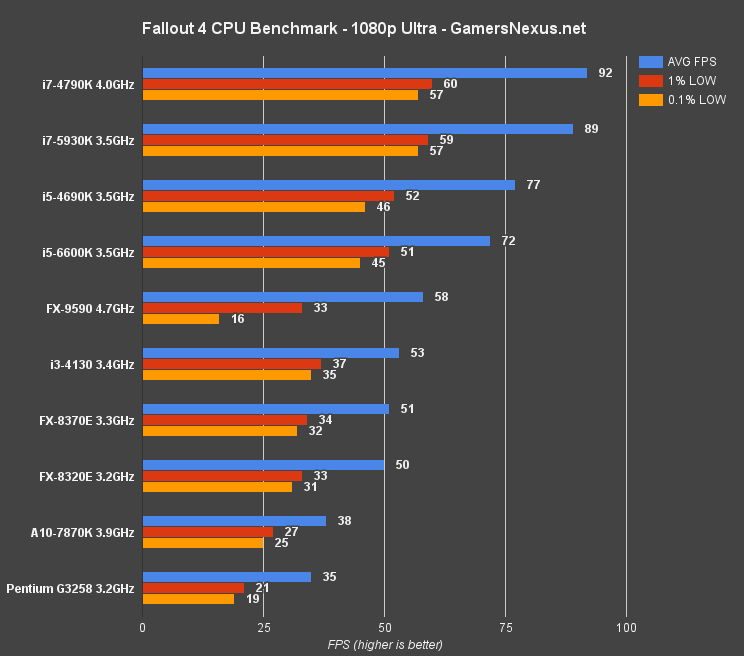 Getting closer to the reality for most gamers, 1080/ultra sees higher FPS output than at 1440 – obviously – but still presents a similar performance curve. The game does not scale well across the CPU lineup we've assembled, again dropping ~17% from the i7-4790K to the same-gen i5-4690K.

The performance advantage of the i7-4790K over the i7-5930K is reflected in a few games, so this isn't abnormal for performance and is not a Fallout 4 specific delta. The 5930K can be beaten-out by the 4790K depending upon thread utilization and game optimization, and the same goes for the 6600K against the 4690K (a latency increase in the Skylake memory subsystem may account for some of this, but marginally slowed transactions along some of the buses are more likely - Anandtech saw this on Skylake testing with other games).

Big hits are visible to the 9590 in the low frametimes (16 for 0.1% lows). These are noticeable enough to impact play. 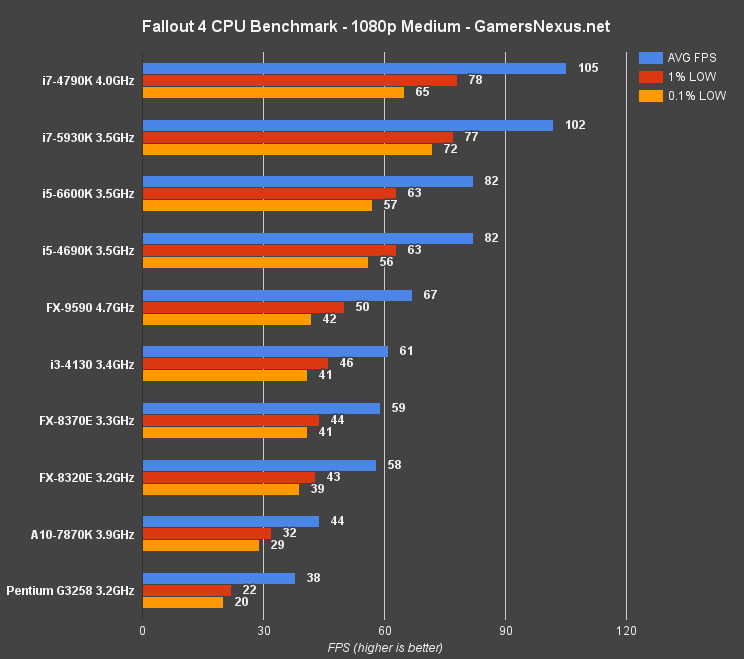 Medium, surely, should be better.

The game is effectively unplayable on the G3258 CPU and, although technically playable, on the A10-7870K + dGPU setup.

Conclusion: The Best CPUs for Fallout 4 -- a Very Resource-Greedy Game

Fallout 4 remains aggressive on system resources despite its confusingly aged look. Again, graphics aren't everything – you're certainly free to enjoy the gameplay – but we're here to analyze graphics and system performance, two things Bethesda didn't do well in Fallout 4. Bethesda's favor expressed toward its now-Frankenstein-like Creation Engine is showing its points of wear, and we're of the opinion that Fallout 4 deserved an engine rework or licensed engine to avoid its many PC issues. Too late now, of course, but maybe Bethesda will figure that out for TES VI.

The game doesn't perform too well on GPUs, as we've already shown amply, and it's presenting a bigger performance disparity than we hypothesized across the same-gen i3-i5-i7 lineup. Even on a 4690K or 6600K, go-to gaming CPUs that are inarguably among the most prolific build choices, we see a performance delta upwards of 30% in some cases. In our test cases, this didn't necessarily drag FPS below 60, though it would with lower-end cards and could for multi-GPU/4K setups.

It's nice to see an i7-4790K get utilized by games, but that utilization doesn't feel like it's for the “right” reasons here – Fallout 4 greedily eats resources and doesn't have much tact in that consumption.

Either way, the results are clear: An i3 can get you by at some setting levels, but will assuredly bottleneck mid-to-high class GPUs; an i5 allows the FPS we require for 1080p/ultra given the correct GPU coupling, but will present a bottleneck not present on the i7; an i7 will likely be GPU-limited before CPU-limited, with thanks to Fallout's aggressive GPU cycle consumption.