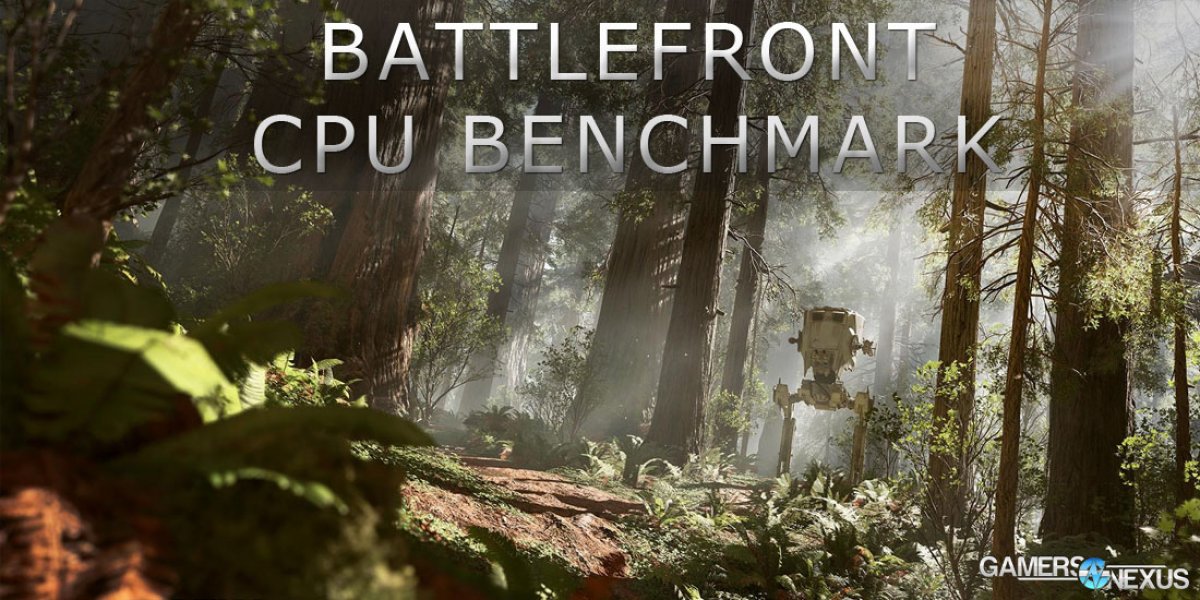 The Pentium G3258 worked reasonably enough during the game's beta phase, but seems to have been dropped from official support with Battlefront's launch. In order to get the dual-core CPU working, which is now technically below spec, users must use .dll injection utilities to force dual-core operation in Star Wars Battlefront. Without injecting the correct .dll files, Battlefront launches with a black screen and locked 200FPS output, producing zero video to the user. The game actually looks like it's crashed or frozen, but an alt-F4 or alt-tab will show full operation of Windows.

To force G3258 support, we injected a dual-core dll through a process detailed in this article. We are unsure at this time if this risks bans from anti-hacker software. The injection produces a stable game that supports dual-core CPUs, though it is obviously a sub-optimal test environment that could potentially introduce variance or non-linear comparison, given the changed test environment for this CPU. Still, without the fix, we are unable to test the G3258 at all. This makes the .dll injection a part of the game's requirements, in our eyes, when it comes to the G3258, and thus creates a real-world use case scenario.

We used the "Survival" mission on a set course (shown in our video). This was chosen for its replicability and reliability during test. This benchmark is not comparable to our previous Battlefront benchmark, which used Tatooine as the bench course. This updated benchmark used Endor, which we found to be an intensive test environment, as the benchmark platform.

Our test discipline mandates disabling any power management functions, including AMD's APM and Intel's C-States. This helps ensure that test results are accurate from test-to-test, and eliminates the chance of variable clock throttling that could impact results in ways difficult to measure.

We used the same DDR3 memory for all platforms (X99 uses DDR4, but is not present in these tests). The memory is configured to DDR3-2133 XMP profiles, ensuring that memory will not impact results on platforms which cannot natively host >2133MHz RAM.

Windows deployment is clean between each configuration. We use a local, custom-built pXe server to ghost images onto drives before testing. Each image is built for specific CPU architectures and chipset drivers are installed post-image. Video drivers are not included on these images; we push drivers down from a local server via custom scripting, ensuring perfect, clean installation of the most stable drivers. In the case of video drivers, we will forgo stable drivers for beta drivers when present.

There is one SSD per bench, ensuring complete isolation of driver and OS/image deployment so that there is no conflict between CPU or platform changes. Forgoing this step risks BSOD failures.

There is one methodological limitation: Because we used one GTX 980 Ti ($643), rather than multiple GPUs, settings which begin to bottleneck the GPU will decrease the profundity of CPU limitations. This does not happen until higher settings, but we still get a clean hierarchy of CPUs. 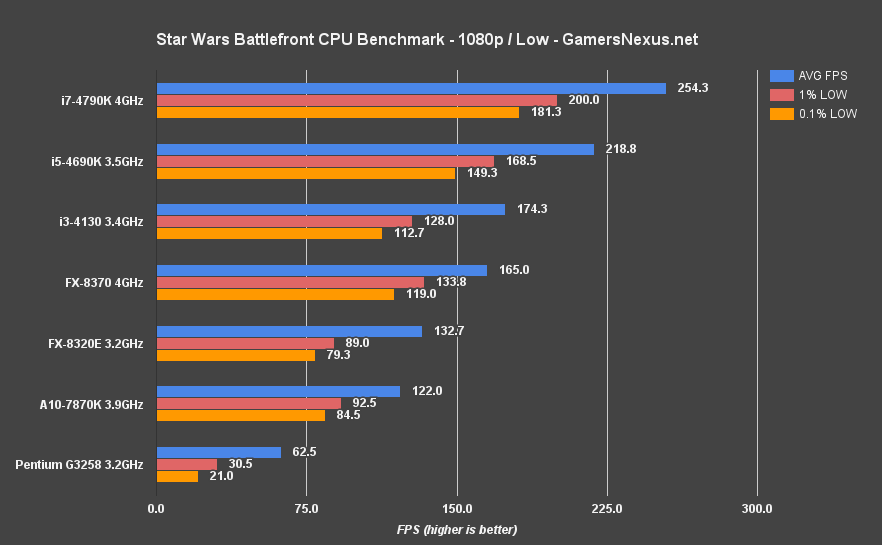 1080p / low (preset) was tested strictly to create a visible delta between CPUs, the hope being that we'd effectively eliminate the GPU as a potential bottleneck. This shows us at what point the CPU will bottleneck the GPU, an important factor to consider in component purchasing. The game is limited to 200FPS by default, but we unlock it with gametime.maxvariablefps 0.

The i7-4790K holds a ~15.8% lead over the i5-4690K ($210), operating at 0.5GHz slower and with fewer threads, and keeps higher low frametimes. The lead is irrelevant at these settings, of course, but the next few charts will analyze the delta's staying power through higher settings.

The G3258 ($50) is brushing up against undesirable space, given the .dll injection requirements and dismal 1% & 0.1% low framerates, both of which fall well below the 60FPS target framerate for this shooter. 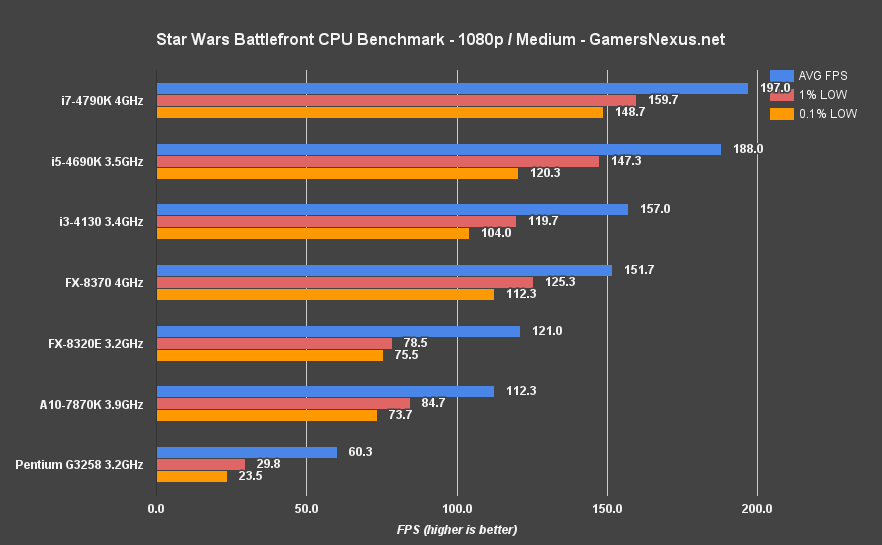 Intel's G3258 is around where it's floor is across all settings, it appears, though we're still dipping down marginally through each test. 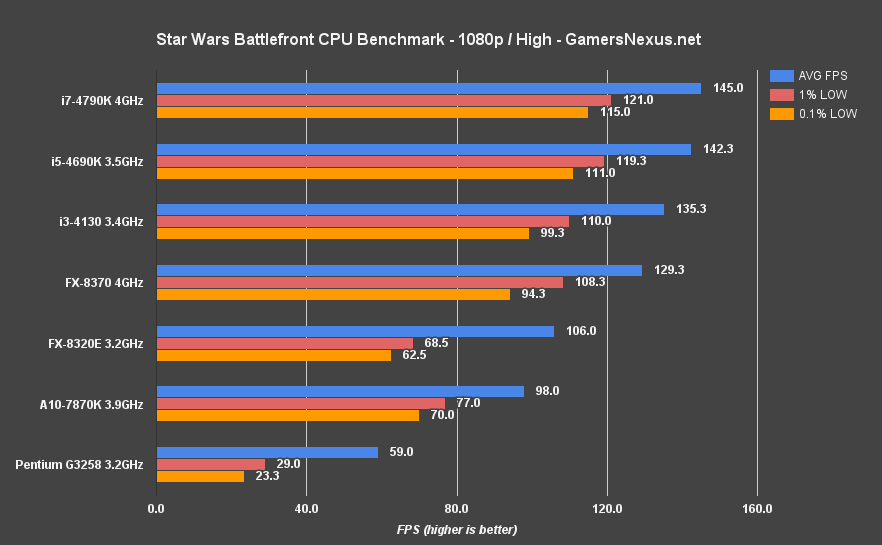 Here's where the numbers really start tightening as other bottlenecks are created in the system. We're testing all the way through 'high' and 'ultra' anyway, despite hitting GPU limits, because we figure it represents a more realistic scenario. If you've got a GTX 980 Ti, you're probably going to try running closer to Ultra. Without moving to more powerful multi-GPU configurations, there is ultimately a limit to how visible the CPU delta is. 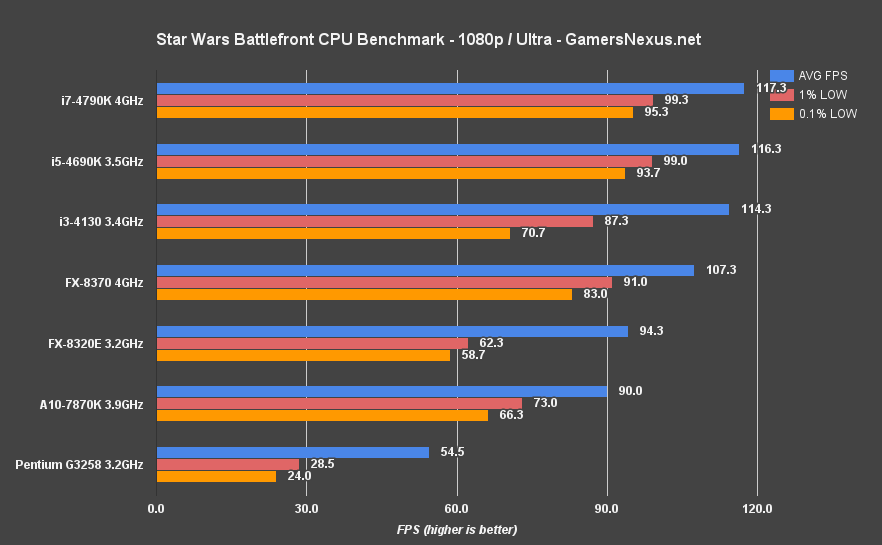 The i7-4790K's 16% advantage at “low,” strictly when coupled with a single 980 Ti, diminishes to just 1FPS AVG (0.86%) at “Ultra.” The takeaway: If you've got a single-GPU configuration of equal or less power than the 980 Ti, the i5 vs. i7 disparity is effectively irrelevant to your Battlefront gaming. The i5-4690K is the better buy in this instance, assuming the rather simplistic viewpoint of someone playing just one game, but multi-GPU configurations may see a larger benefit of the i7. We did not test this due to the limited install count of Battlefront.

The gap between the i3 and i5 is similarly ineffective in Battlefront – again, given this config – but the 0.1% lows are substantially lower (27.99% delta).

The FX-8370 non-E is also an acceptable performer for Battlefront at Ultra.

Remember that the FX-8370 and i3-4130 did show considerable performance disparity against the i5 and i7 at lower settings. If you're running multi-GPU setups – and anyone doing so would likely already have a higher-end CPU, lest the system constantly be throttled – then moving closer to the i7 is the best choice for mitigating bottlenecking.

Intel's Pentium G3258 CPU, despite its solid $50 price-point, is not a great processor for Battlefront – that much is clear. Between forcing dual-core support (which may not work forever) and the heavily throttled performance, it would be ideal to opt for a higher-end CPU – an i3, 860K, or 8320E ($132) would all be much better choices. The G3258 will still run Battlefront if forced, just expect some choppiness of frame delivery pursuant to the lower 1% and 0.1% metrics, even at “low.”

The 860K, not present on this test or in our lab (but we can assume placement near the 7870K), would be a good buy for lower-end GPU setups that demand a tighter budget. The AMD 860K ($75) buy would be strongly recommended over Intel's G3258.

The game runs fairly well across all CPUs, assuming a single-GPU setup similar to our build, but you'd want to gravitate toward the i5-4690K the best value AVG, 1%, and 0.1% performance. Multi-GPU configurations would do well to push toward the i7 ($300), something that should be considered especially when attempting to output 144Hz in other games.

Battlefront isn't too intensive overall, and that shows in these tests. Avoid dual-core CPUs like the G3258, then favor GPU combinations that reasonably match the CPU's market positioning, and everything will run fairly well.

If you like this type of content, please consider supporting us on Patreon. Our support forums are available for free to those requiring assistance.