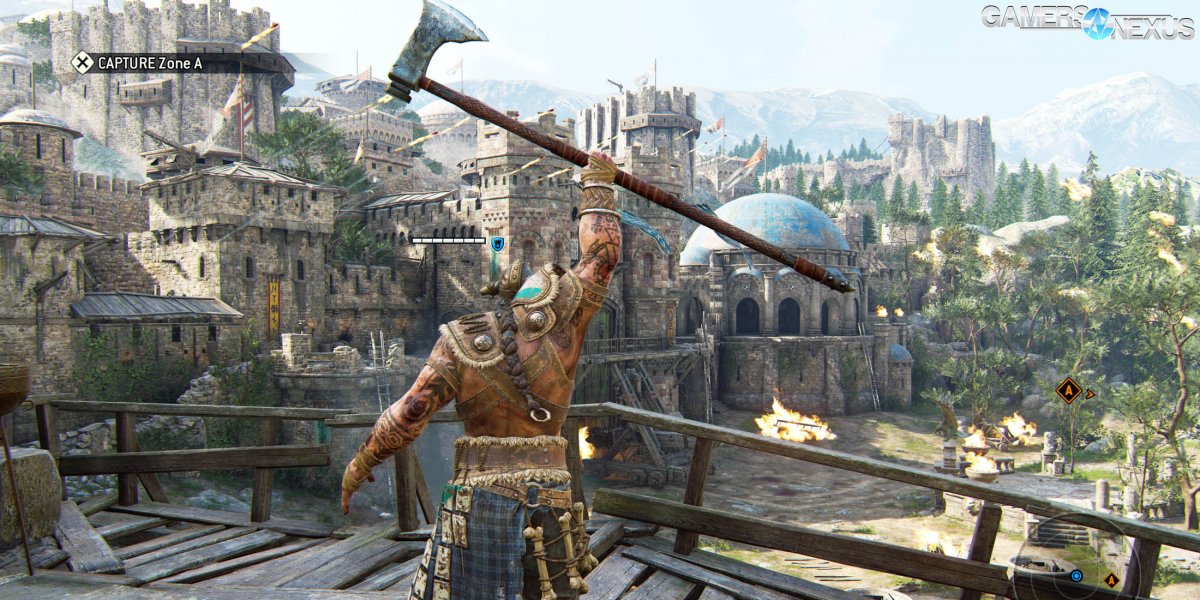 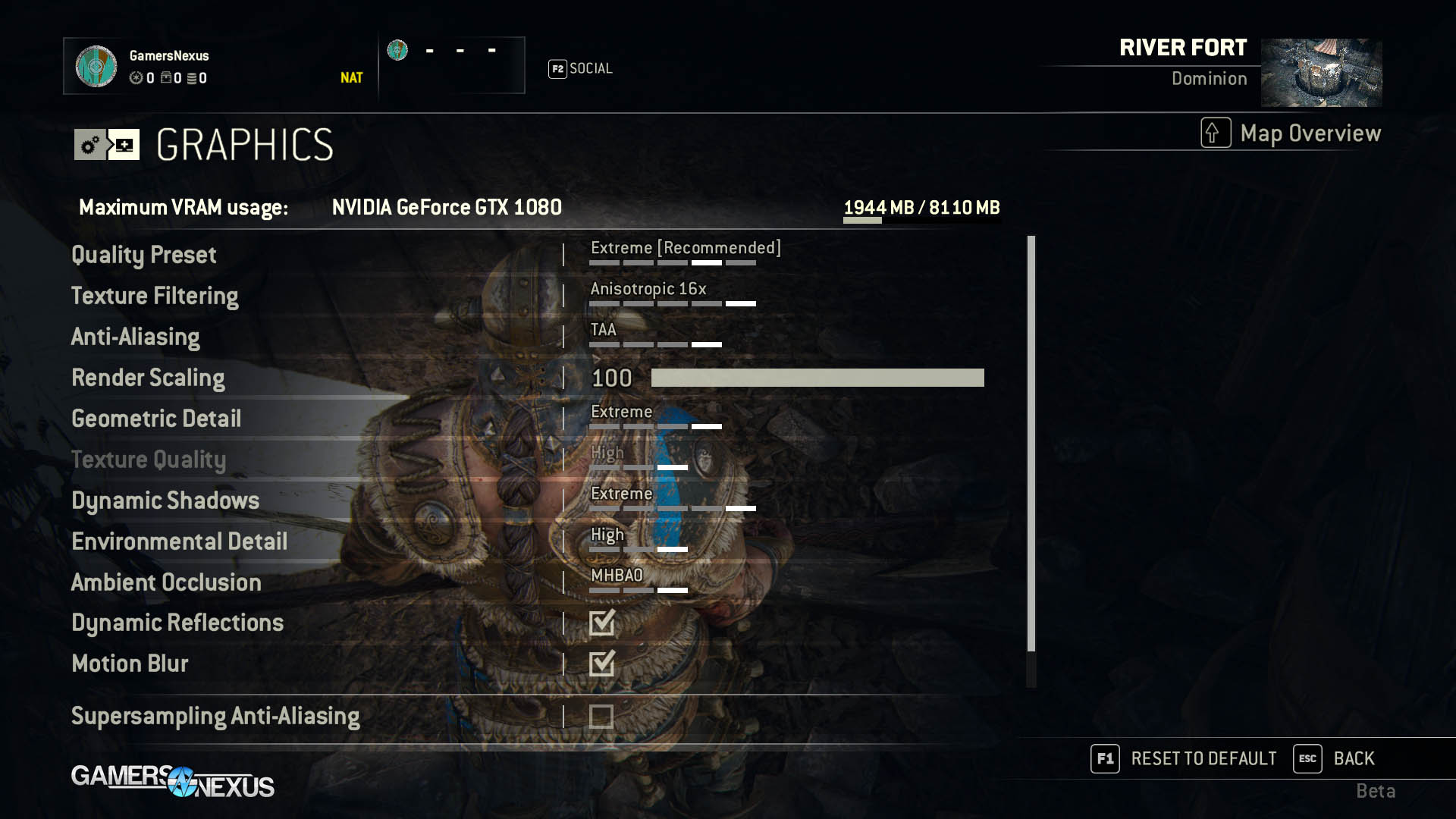 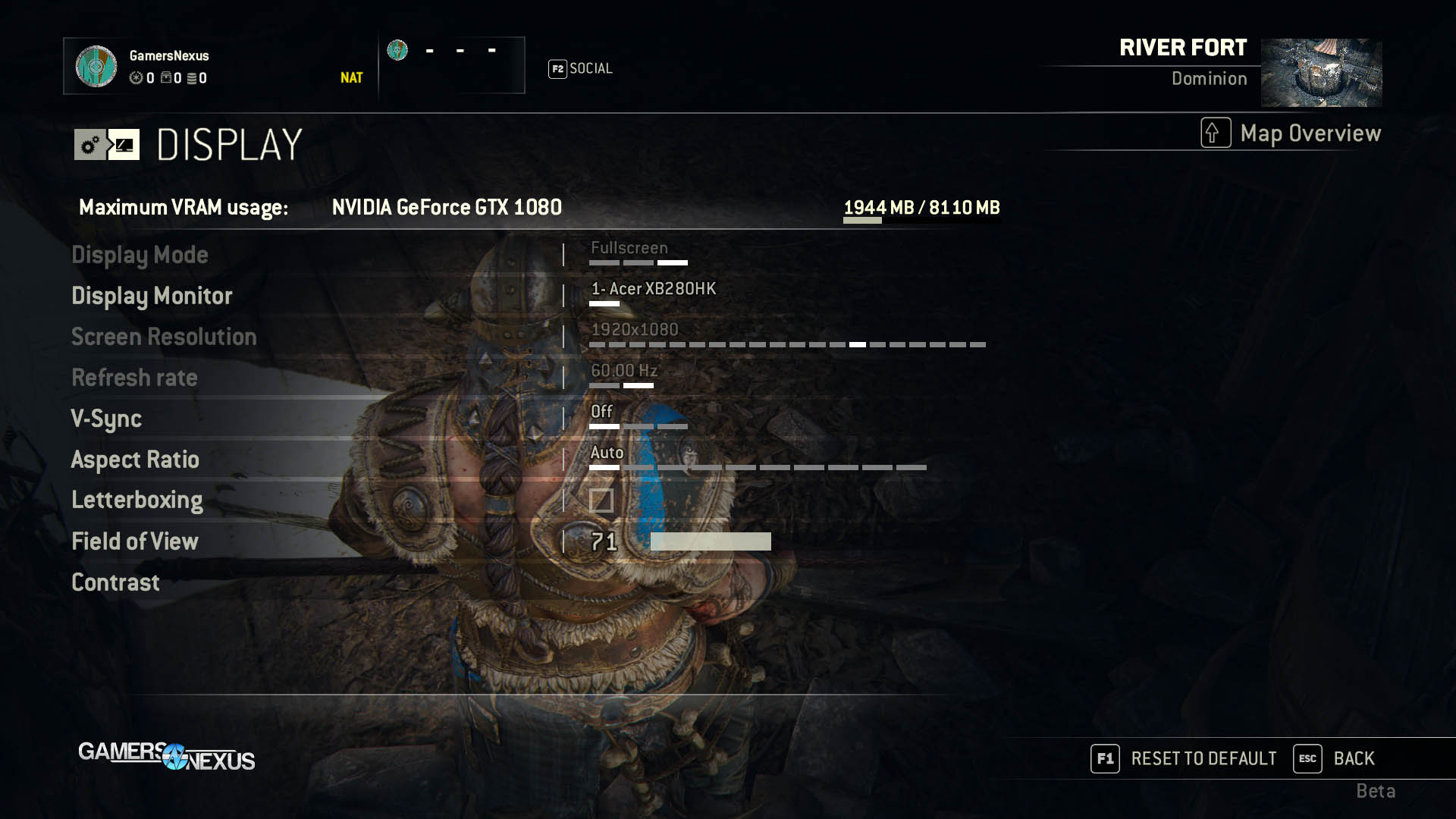 For Honor’s impressive visuals are derived in a few ways. The color palette is exceptionally orchestrated and tone-mapped, for one, but use of tessellation and high-detail textures makes for an environment that fits the game’s gritty undertones. Looking carefully at the scenes in our benchmark course (see: video accompaniment), we can see that For Honor also relies upon heavy geometric complexity with its more extreme settings. The graphics options, as they are present in the beta version of the game, are defined in their entirety below:

Texture Filtering: This is your normal anisotropic filtering. Although For Honor technically changes this setting as the graphics preset is scaled, AF is known to have effectively zero impact on the FPS of the vast majority of games. Anistropic filtering is a means to improve object and texture smoothness proportionate to the screen’s viewing angle, and has been around for years.

Anti-Aliasing: The method of smoothing over jaggies in the game. TAA is the preferred setting and functions temporally, or frame-to-frame, to better improve edge clarity during movement. This theoretically reduces shimmering/marching ants effects from traditional single-frame AA methods.

Render Scale: You’ll generally want this at 100%, unless under specific circumstances involving supersampling. Lowering render scale will reduce the rendered output of the game’s graphics while retaining the display resolution configured in the “Display” options menu. This would allow you to configure a 4K display resolution with a 50% render resolution, resulting in a 1080p render.

Geometric Detail: Like most settings with this game, you’re getting GPU impact with most things – but geometric detail does tend to serve as the first candidate for improving CPU performance in games with older APIs. Geometric draw calls must go through the CPU, and so reducing geometric detail would assist with CPUs that struggle to keep up with the GPU.

Texture Quality: As of the beta, texture quality is grayed out and stuck to ‘high.’ We believe that this is simply because the other texture resolutions haven’t yet been shipped with the title (or enabled), but the menu suggests that low and medium options will eventually be offered. Texture quality most directly impacts VRAM consumption in nearly every game that exists, as this setting almost exclusively refers to the resolution of the textures used. Higher texture resolution means higher VRAM residency by the game. Lowering this setting would help for users of 2GB video cards. We do see some differences between 3GB & 6GB variants of the GTX 1060, too, and this would be a place to look for improvement. More below.

Dynamic Shadows: As far as we can tell, the quality and edge clarity of shadows attached to dynamic host objects is impacted by this option. That’d be things like character shadows, where the shadow corresponding to character movement has its quality dictated by Dynamic Shadows quality.

Environment Detail: We haven’t studied this one too closely just yet, but it seems to be a mixture of decal and/or mesh detail for the static environment objects.

Supersampling Anti-Aliasing: Defaults to ‘off’ in all graphics presets given the tremendous workload produced by the option.

Although For Honor technically includes a built-in benchmark, we found the utility to be wildly inaccurate versus actual gameplay, even multiplayer, and have opted to perform real in-game testing instead.

We also found performance to be identical between multiplayer and bot matches, further discovering that the maps produce fairly similar FPS across the board (+/- 8%).

We tested in a bot match using the course that’s shown in the benchmark video embedded above, but also validated with gameplay and found performance to be largely comparable when in and out of combat, as the maps are so complex to begin with. Drivers used were 17.1.1 for AMD and 378.49 for nVidia.

Each test is performed on the River Stronghold map during the day, with hero bots disabled. We run the test course from spawn, along the outer wall/catwalk, and then conclude after the 30-second period. Testing is conducted a minimum of three times per device, per setting, then averaged. Outliers are researched if present. This ensures accuracy.

FPS is captured using the onPresent metric, then we analyze the slowest 1% and 0.1% of frametimes (and convert that data into FPS for easier data presentation). Learn more about these metrics here.

First, here’s a very brief sample of the game’s built-in benchmark versus our own. This is with a GTX 1060 6GB card – we’ll look at the full charts with the other GPUs in a moment. We’re seeing a huge performance hit in the 0.1% low values, and averages overall are also down. Because the built-in benchmark doesn’t at all represent real gameplay, we’re going to stick with our own test course. 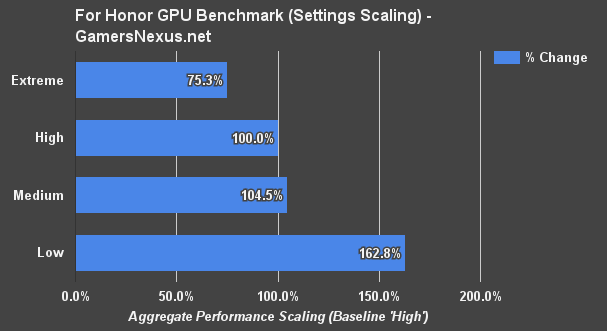 This chart looks at FPS scaling when using a mid-range card, so that’d be aggregate data between the GTX 1060 and RX 480. With this data, we’re using a baseline of “High” and showing the performance percentage offset. You lose about 25% of the performance by going from High to Extreme with these two cards, but the gains from High to Medium are basically zero. This might change as more texture resolutions are implemented in the final version. Low dramatically improves performance, but does look noticeably worse in the geometry and post FX departments.

4K seems more abusive than usual when compared to lower resolutions with this game. With the GTX 1080 FTW at full tilt, we’re seeing an average FPS of 52, with lows close by at 48 and 45FPS. The MSI GTX 1070 Gaming X operated at 42FPS AVG, also with acceptably timed lows. The RX 480 isn’t really meant to be a 4K gaming device, but we threw it on here anyway. Performance falls below 30FPS, proving a bigger problem than is typical with For Honor. In this game, falling below 30FPS means you’re at risk of being kicked from the (P2P) servers. 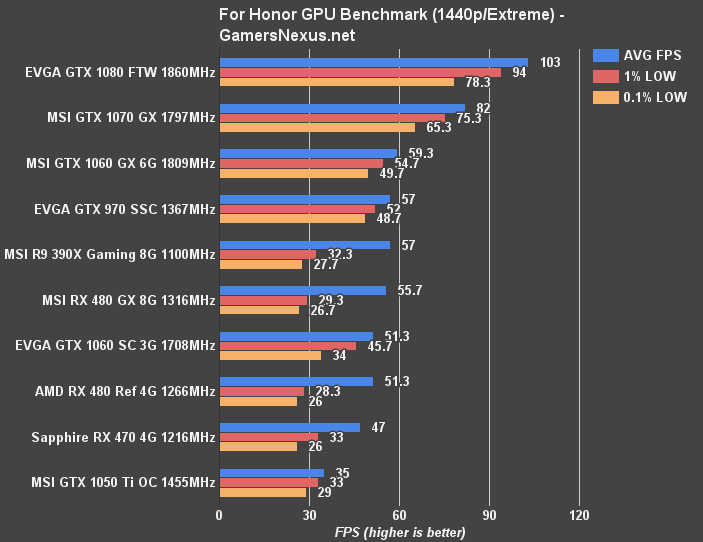 AMD’s lows are hurting here, but we’ll reserve judgment until the game’s promised “day 0” release drivers. For now, let’s highlight all the AMD 1% low and 0.1% low frametime performance issues as possibly related to unfinished drivers, then revisit when AMD ships the package.

The GTX 1060 3GB is next, producing FPS noticeably slower than its 6GB counterpart. Note that this is partly because of the increased clock speed of the Gaming X, but the low performance dips are primarily resultant of the halved VRAM and one removed SM.

AMD’s new RX 470 posts performance above the 1050 Ti, as our initial 1050 Ti review would lead you to expect, though we’re starting to enter territory where 1440p or upsampled play isn’t necessarily likely on this hardware. 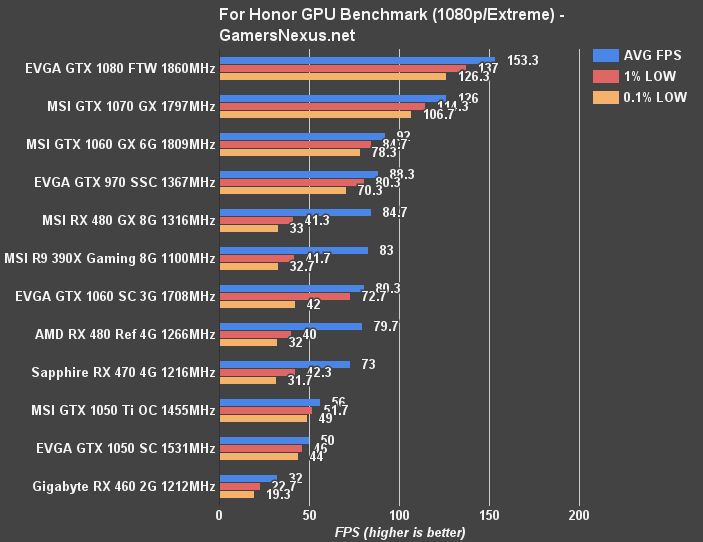 Time to move on to 1080p with Extreme settings. The EVGA GTX 1080 FTW is now capable of running the game with max settings while sustaining a 144Hz refresh compatibility. The GTX 1070 Gaming X isn’t too far behind – again about 17-20% -- with the GTX 1060 Gaming X 6GB just ahead of the RX 480 8GB card. Again, the RX 480 and other AMD devices are posting generally lower frametimes, though we didn’t visually detect any seriously jarring stutters until running on the RX 460 2GB card. Drivers potentially play a role in this.

The R9 390X and RX 480 are effectively identical in performance, both leading the GTX 1060 3GB SC card. This is where we’re starting to see the 3GB vs. 6GB disparity popping-up more noticeably.

The RX 470 runs high averages with For Honor at Extreme settings with 1080p resolution – more than playable, and the lows aren’t bad enough to ruin the experience. Even the lower-end GTX 1050 Ti operates at about 60FPS AVG, with the 1050 SC not too far behind.

Best Graphics Card for For Honor

We’ll revisit AMD (and nVidia, if further driver updates are pushed) when the game launches and all driver revisions are posted. For now, what we can tell is that “Extreme” settings are playable at 1080p with devices of the class GTX 1050 Ti or RX 470 and greater. The GTX 1050 sort of does Extreme at 1080p, but we’d recommend a settings reduction or generally more appeasing attitude toward <60FPS dips.