Sea of Thieves, the multiplayer-adventure-survival-pirate simulator from Rare, has finally been released after months of betas and stress tests. Judging by the difficulty they’ve had keeping the servers up after all that preparation, it seems like it’s been pretty popular. This comparison looks at Sea of Thieves Xbox One X vs. PC graphics quality, equalized graphics settings, and framerate/frametime performance on the Xbox.

SoT is also one of the first really big multiplayer titles to be added to the “Xbox Play Anywhere Program.” That means that it’s playable on both Xbox One and Windows 10 with a single purchase (yes, it’s a Windows 10 exclusive DX11 game). Also, Xbox and PC players are free to encounter each other ingame or even party up together, with the only obvious downside being forced to interact with the Windows 10 store and Xbox app. Together, these two aspects make a PC vs Xbox a very interesting comparison, since any player that owns a PC and an Xbox could easily switch.

Stylistically, Sea of Thieves is an odd mix, but it works. Characters, ships, and islands are rendered in a soft, cartoony style (Fortnite might be the most topical comparison), while the ocean that covers the vast majority of the map is hyper-realistic. Rare released a comprehensive chart of specs for various graphics settings back in February, and they made it clear that their goal was to make SoT playable on pretty much anything that’s capable of running Windows 10. PC graphics have five levels of quality ranging from minimum (“cursed”) to ultra (“mythical”), but they’re divided amongst a tiny range of actual settings. Rare has helpfully included blurbs about what each one actually does: 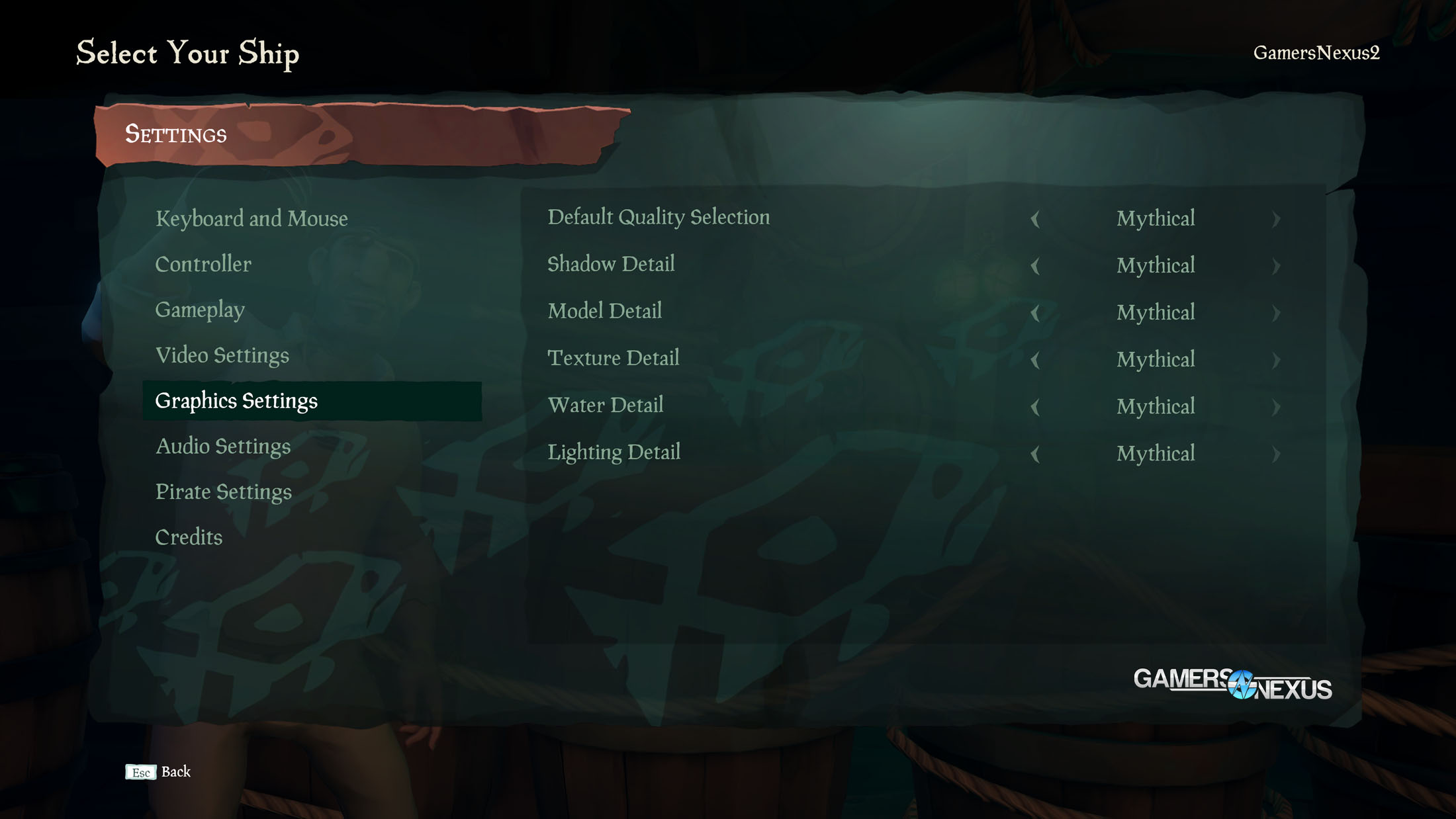 As a side note, lowering these settings from “mythical” to “cursed” on PC isn’t as bad as it sounds. The texture detail setting affects everything, including the Sea of Thieves logo and UI elements, and the pop-in at lower model detail settings is brutal. Overall, though, the cartoony art style makes the game immune to reductions in quality, except the water. If at all possible, water detail should be kept at the max setting.

Max Settings PC vs Xbox One X at 4K

Thanks to Xbox/PC crossplay, we were able to sync up PC and console footage easily by crewing a ship with two accounts, one on each platform. An interesting side effect of this method was the discovery that the worlds are almost entirely in sync even on different platforms. It makes sense that wave patterns must be synced because they affect the ship’s position, but even the clouds are identical, although they are subject to the PC’s greater draw distance.

We initially had the Xbox set to the default “standard” color space intended for TVs rather than “PC RGB,” so a couple of the Xbox scenes used in this comparison may look washed out--that’s not a game thing, it’s an Xbox thing.

The Xbox One X delivered 4K at near-flawless 30FPS, and it appeared to be doing so at near PC max settings, although the PC version has the major advantage of a removable framerate cap. The game did exhibit some minor hitching and screen tearing on Xbox in graphically intense scenarios like loading in a large island or bobbing around in stormy water. Our framerate analysis program detects tears as unique frames right now, but that’s okay in this case--tearing can be seen in the above charts where the frametimes dip to 16.67ms. There was also the occasional brief moment of lag, but that’s a networking rather than a performance issue, and given the server load over the past few days that makes sense.

We did notice that the Xbox’s model detail setting is lower: on the highest PC settings models load in so far away that it’s difficult to discern any popping at all, but not so on Xbox. Also on Xbox, it’s occasionally possible to see a sharp line beyond which waves are not rendered, while on PC the distance is again so great that the line is invisible. We didn’t do an SSD vs HDD benchmark this time, but for what it’s worth, the Xbox using its stock HDD took something like 40 seconds longer to load into a game and loaded textures more slowly than the PC using an SSD. At the time of this writing, Rare is planning to fix “performance issues on Xbox One X” in a patch shipping early next week (the week of the 25th). The issues apparently occur in specific (unnamed) places, and we don’t think we encountered those areas during testing.

Other than that, we only noticed some subtle lighting differences. There was less reflected glare from the muzzle flash of cannons on Xbox, and the shipwright’s stall was more brightly lit on PC due to sunlight bouncing off the water, as well as some possible differences in occlusion. Finally, lens flare is absent on console, which is odd, since it’s a computationally cheap post-processing effect. It’s enabled even at the lowest PC settings, like it or not. It’s entirely possible there are other small differences like these--but if so, they’re difficult enough to detect that they don’t affect the experience. Lighting and reflections on and under the surface of the water itself seem identical, but whitecaps on PC contrast more and are better-defined.

Playing on PC doesn’t confer a gameplay advantage; the combat isn’t precise enough that a mouse and keyboard are necessary. As for graphics, at 4K with maximum settings, it’s hard to see any difference other than framerate between PC and Xbox One X, so framerate is deciding factor here: our preference is a PC good enough to never dip below 30FPS with (at least) water detail maxed out.

The Xbox One X has interesting tearing issues and peculiar behavior with frame pacing, but these are things we hope Rare is addressing in the upcoming "patch to resolve Xbox One X" performance issues.

Separately, view our video above for even more detail on all of this.