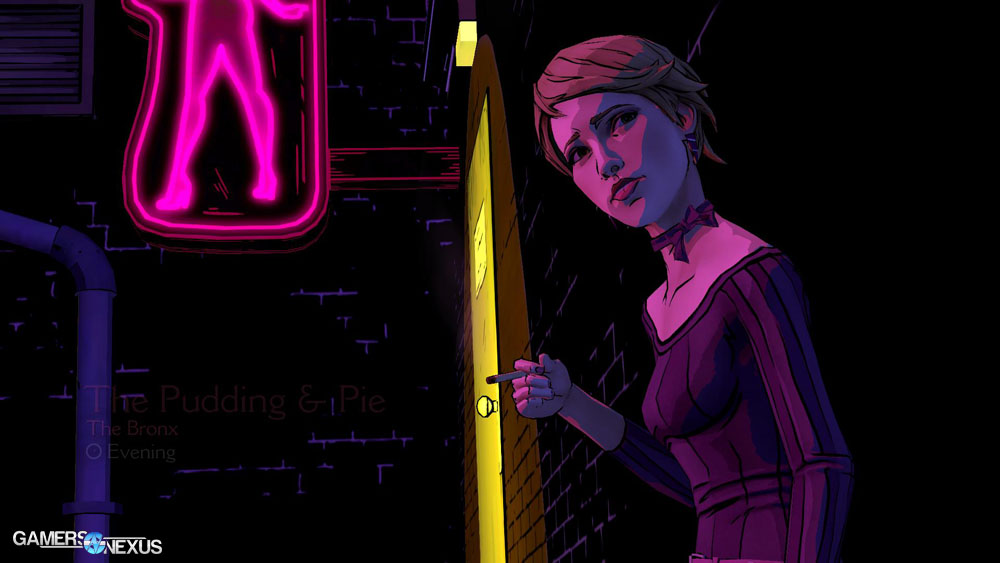 Telltale Games recently released the second episode in The Wolf Among Us, Smoke & Mirrors. GamersNexus continues its windy trek through the Telltale adventure series in this review.

I had played through Episode 1, Faith, and was delighted by its gripping storyline, superb visuals, and a dynamic (but buggy) dialogue wheel. Episode 2, Smoke & Mirrors, adheres to its predecessor’s formula and further tests the relationships of Bigby and his Fabletown peers, and although it culminates in another well-devised cliffhanger, it makes me doubt the impact of my actions on future episodes.

The Wolf Among Us: Episode 2 Video Review [Limited Spoilers]

We did not spoil anything from Episode 2 in the audio component of this and did our best to obscure key subtitles in the video (using black bars). You should be fine. If you're very concerned about spoilers, we recommend just listening to the audio and not watching the video component (or not reading the subtitles).

In this The Wolf Among Us - Episode 2: Smoke & Mirrors review, we’ll look at how Telltale continues the Episode 1 plot, consequences of players’ actions from Episode 1, and any noticeable tweaks to the gameplay.

Please note that I’m diving straight into the continuation of the series, so there are early plot spoilers from Episodes 1 and 2 that I have to include to give readers a better understanding of the game overall. Learn more about the backstory and Fables universe by reading our Episode 1 review.

Episode 1, Faith, saw Bigby Wolf tracking down the murder of Faith and confronting some fairytale personalities gone bad. At the end of his manhunt, Bigby stumbled upon a particularly chilling crime scene... with a dead Snow White. Smoke & Mirrors initially turns up the shock-knob when Snow White appears during an interrogation scene, and it reveals an intriguing backstory around why someone else was “glamoured,” or magically disguised, to appear as Snow White at the scene of her Episode 1 murder.

This approach to the story does not advance the Faith storyline much but suspends Bigby’s investigation with deeper understandings of Fabletown’s unpredictable cast. Diverging from the Faith path may upset some players who wanted to investigate more and put their chosen suspect to justice, but with three episodes remaining, Telltale Games is letting players explore and test Bigby’s integrity and morale in a confined Petri dish of a setting. Episode 2 specifically presents a determined Snow White, one of maybe two “strong” female characters, an unusual softer side to Ichabod Crane and Holly (the bartender from Episode 1), and an enigmatic pimp named Georgie Porgie (from an English nursery rhyme). Characters unfold differently from how they came off to Bigby in Faith, keeping Smoke & Mirrors exactly as the episode name promises.

As the wheel turns 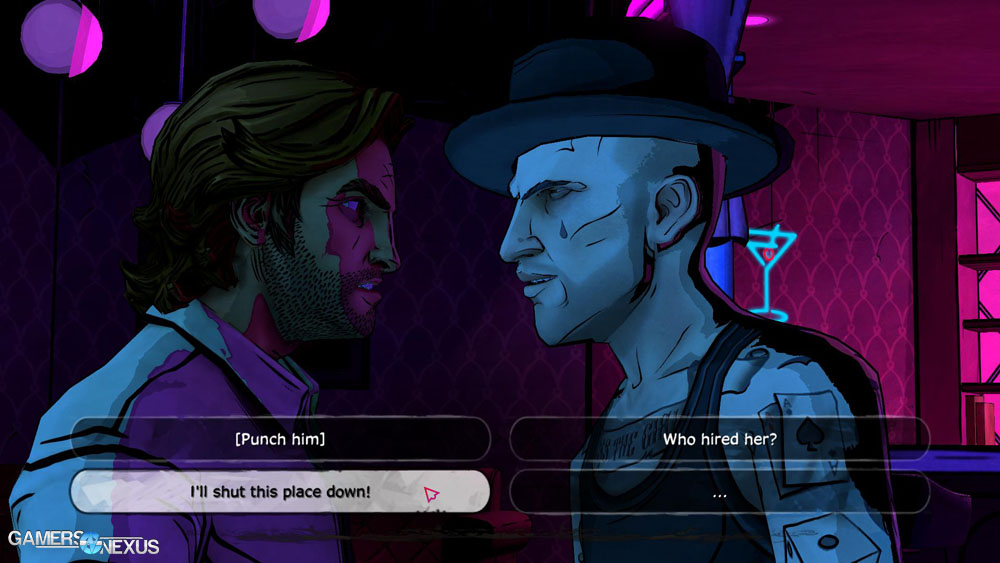 As mentioned earlier, the gameplay in Smoke & Mirrors (here it comes) mirrors that of Faith (sorry.). Players spend most of their time choosing dialogue options to advance the story and, in between, walk around investigating crime scenes and evidence, and even throwing a punch or two with an out-of-line creature.

There are a couple of standout dialogue scenes in Smoke & Mirrors and one particularly gameplay-rich scene. I liked how during the suspect interrogation I had a plethora of options for how I could interrogate. I could immediately resort to violence, I could ask principle questions (who do you work for? why were you there?), or I could play around with the different pieces of evidence. Or I could immediately resort to violence.

This scene presented the most direct approach to player’s choice and succeeds at making the player think while being entertained; it's easily the best use of the gameplay from the first two episodes.

The Wolf Among Us does not give players a big payoff for their actions in Faith -- at least, not up front. Perhaps I’ll need to play through both episodes differently than I had in order to create a new path in the storyline, but from a first playthrough perspective, I’m left underwhelmed. For example, in Faith, I chose to reinvestigate Toad’s tenant building instead of rushing to prevent a possible murder; this is one of the key decisions I can view in The Wolf Among Us’ menus, but it does not have an impact on Smoke & Mirrors that I know of. On the other hand, although I interrogated Tweedle Dee, the suspect that I arrested in Faith, I did not see a re-exploration of or proper closing to Bigby’s relationship with the Woodsman in Smoke & Mirrors. I want to believe Telltale is saving some of these vital follow-ups for future episodes, but I can’t help but perceive the impact of my actions in Smoke & Mirrors are conditional.

I must also voice my discontent that there was no final decision in Smoke & Mirrors. Episode 1 made the player decide the game’s prime suspect, immediately setting up Episode 2; data shows that the player’s decision varied greatly among the five possible suspects. Not having a decision of this magnitude in Episode 2 is upsetting because I saw how, after the episode’s second scene, my decision from Episode 1 did not uncover anything game-changing about Tweedle Dee.

I noticed in Episode 1 that the physical confrontations could be clumsy. I could press the wrong button or not completely line my reticle with the red circle, but that the scene would still play out. My Episode 2 playthrough gave way to only one fight due to my player decisions, but I still experienced the same issue. I felt less engaged in the moment, and I think it’s unfortunate given how an opportunity like this gives the gameplay more variety.

The dialogue wheel had also executed inconsistently in Episode 1. There were a few times when I did not have enough time to read through all the options before making a reflex-like decision. Telltale games made just enough improvement to this dynamic so that I had to make a gut-feeling decision, but also had enough time to read-through and understand the options. 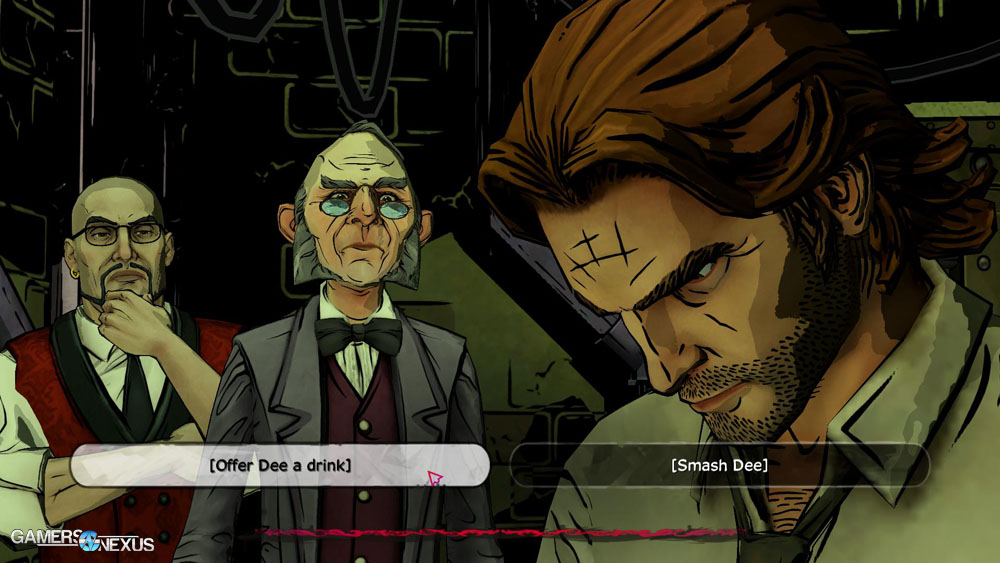 I expected more of a follow-through from Telltale Games in Episode 2, but I understand that the middle of the series usually does not produce the most action. Smoke & Mirrors is still a mysterious, brooding adventure worth a couple playthroughs. Besides, now’s the time when gamers reach into their backlogs, and if they’re not busy waiting for Titanfall, they should check out The Wolf Among Us. Hopefully I don’t have to wait another 3.5 months until the next episode, A Crooked Mile, since I’m howling to find out what’s next.