When Telltale Games announced last Wednesday that it would release Episode 3 of The Wolf Among Us on April 8, I let out a sigh of relief and commented: “Thanks for not leaving me hanging off the cliff for too long!”

You can find our reviews of the previous two episodes here:

Smoke and Mirrors, the game’s second episode, dealt a shocker of an ending that I could not get out of my head for weeks. I have been itching to see how the game’s plotlines would start weaving together in Episode 3, A Crooked Mile. GamersNexus continues its windy trek through the Telltale adventure series in this review.

To recap my impressions of the series thus far: Episodes 1 and 2 demonstrated Telltale Games’ strong storytelling capabilities and visualized a gritty, noir-infused Fables comics universe. The dialogue wheel worked well for how I wanted Bigby to act (we discussed dialogue mechanics with the Dreamfall Chapters folks), but I found the confrontation scenes buggy and unpolished. Again, to be clear, that was for the first two episodes. We'll see if things change here.

Above all, I wonder if (and how) my decisions from the first two episodes will carry over to A Crooked Mile. We'll address all of these points in the below The Wolf Among Us - Episode 3: A Crooked Mile review & gameplay analysis.

We did not spoil anything from Episode 3 in the audio component of this and did our best to obscure key subtitles in the video (using black bars). You should be fine. If you're very concerned about spoilers, we recommend just listening to the audio and not watching the video component (or not reading the subtitles). Please also note that this review is based on the linked series of events in my particular playthrough.

Where we Last Left Off

The storyline’s evolution from Episode 1 to Episode 2 concerned me because it left out some of the initial conflict and key decisions I made as sheriff Bigby Wolf. A Crooked Mile does not bring Episode 1 back in its entirety but effectively connects the themes from Episode 1 to the conflict that develops in Episode 2, expanding it to more characters and greater risks for Bigby and Snow White. 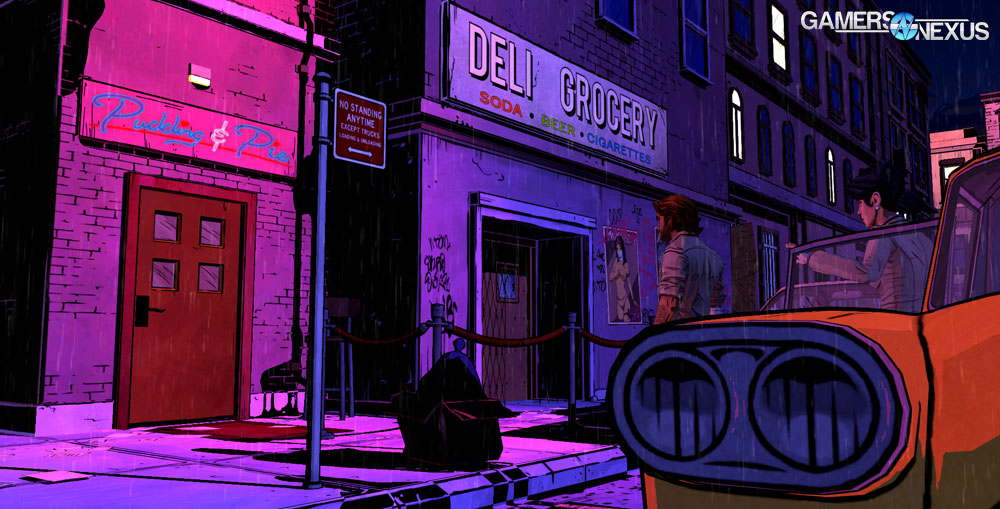 Telltale Games immediately injects morality into its dialogue and decision-making options in A Crooked Mile, putting players on edge with how they want Bigby to be perceived by the rest of Fabletown. Some of the expletives in the dialogue arrive sooner than the conflict would naturally allow, causing the voice work to seem forced. Fortunately, the opening scene’s turning point ends the conflict strongly and binds Bigby to the series regulars even more.

A Crooked Mile marks the midpoint of The Wolf Among Us’ five episodes, so it takes responsibility for developing the primary conflict presented in Episodes 1 and 2. At this point, Bigby knows who has offended the law and who is in danger, but he doesn’t have enough information to make a conscious decision and take action. A Crooked Mile focuses on Bigby’s reliance on Fabletown characters to tell them their side of the story -- down to the tiniest details.

The conflict has outgrown Bigby’s sleuthing abilities through the episodes and is now so threatening that he and Snow White nearly act out of desperation. Telltale has done an excellent job of building tension between Bigby and Snow, as their views clash in a couple of key scenes (which I’m tempted to reveal, but won’t). Snow transforms in Episode 3 to question Bigby and take ownership of the conflict, putting her in danger and toying with players’ decision to protect her or save Fabletown.

I will note that the time I had to make some key decisions expired more quickly in this episode than with Smoke and Mirrors. There were a few instances when I could not fully process the dialogue options and weigh them against what the characters said, so I made a few near-blind guesses. I understand that the conflict is escalating and that Bigby needs to think on his feet to prevent some ugly scuffles, so although the timing isn’t perfect, it’s the right idea.

I noted in Episodes 1 and 2 that the physical confrontations, usually a short series of quicktime-like events, felt clumsy. There are no more than a handful of these scenes in A Crooked Mile, but they play more fluidly. Perhaps I was more skilled this time, but the game’s responses to my actions were perfectly timed. The episode’s final conflict presents the most intense action since chasing down Tweedle Dee in Episode 1, and although the scene drags out Bigby’s lupine transformation too much, it gives players a chance to “release” the wolf in Bigby for the first time in the series.

What matters most in A Crooked Mile is that, as a result of developing the conflict at this stage, it builds a playthrough specific to perhaps not the decisions the player makes, but the interactions he has with the characters. It’s really making me wonder what would happen if I went back to Episode 2 and perhaps Episode 1 and changed up my actions. Tertiary characters like Grendel and Narissa keep coming back to the plot and make me think twice about my responses to them... and now the conflict is making me care about what’s going to happen to each and every Fabletown resident. It’s impressive how a short series of episodes can create empathy for just about anyone (and almost everyone) in that universe.

A Crooked Mile does an excellent job of expanding Bigby’s relationships with the characters and developing the conflict that had spiked at the end of Episode 2. Some of the decision-making is timed too quickly, but it comes at a time when Bigby must think before a situation gets out of hand.

We’ll be continuing our coverage of The Wolf Among Us in the coming months.