Child of Light has excited me since its announcement not only because it’s developed by Ubisoft Motreal (Assassin’s Creed, Watch Dogs, Far Cry), but also because it’s a departure from the action-oriented gameplay that most AAA publishers deliver. Creative Director Patrick Plourde and writer Jeffrey Yohalem, with whom I spoke at this year’s PAX East, have spearheaded an artistically-inspired Japanese Role-Playing Game (JRPG) with Western elements, like platforming and item-crafting. For the most part, their JPRG rendition feels like a handcrafted, intimately-composed product that visually immerses its audience in an interactive storybook. The story sometimes comes across as fragmented from the gameplay, and customization depth feels limited, but overall, Child of Light offers a beautiful and well-composed adventure worthy of an entire playthrough.

In this Child of Light review, we'll talk impressions, story, artistic presentation, and the unique utilization of poetry as a central game design element.

What is Child of Light?

Child of Light is a turn-based RPG with platforming, item-crafting, and puzzle-solving elements. It tells the story of a young girl named Aurora who has fallen asleep in her world, only to awaken in the fantasy world of "Lemuria." There, she must explore the cause of Lemuria’s downfall and, with the help of her friendly sprite Igniculus and supporting party members, must free Lemuria of its evil rule.

This review has very few plot spoilers, so proceed with gusto.

Child of Light: Presentation and Story 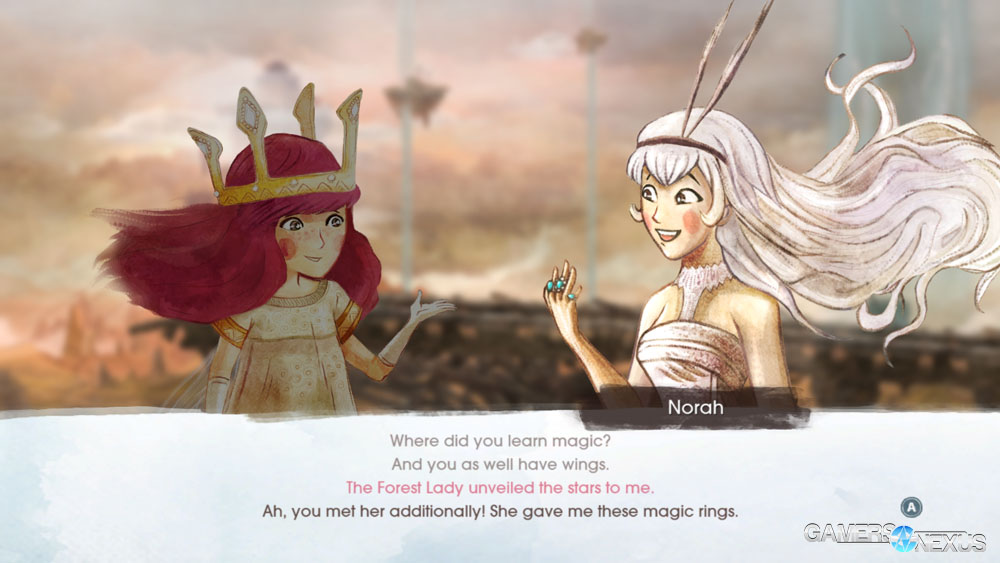 Child of Light is developed in Ubisoft’s UbiArt engine - the same one used in Rayman Origins and Rayman Legends. The engine’s ability to import concept art and original design files has enabled a more handcrafted graphical presentation. The Lemuria backdrops are stunning with their watercolor richness and inspiration from fairytales, poems, and other literary works; character models and textures are detailed and inspiring, and in some cases, pretty unique: Aurora’s wild pink hair wooshes as she runs and flies, often surrounded by breezes, waterfalls, and aethers of blue and gold glowing particles.

Equally as inspiring and immersive are Child of Light’s ambient sounds and soundtrack. French Canadian composer Béatrice Martin, AKA Cœur de pirate (translated to “heart of a pirate”), has composed a string-dominated orchestral soundtrack that soothes and instills wonderment upon floating through each environment. The battle music turns things upside down, creating the appropriate level intensity, while the title track makes me want to close my eyes and listen to it over and over again.

The story is light and whimsical, complementing the watercolor world and its fantastical beings. Lead Writer Jeffrey Yohalem’s dialogue is playful and creative in that its rhymes aren’t predictable; often the characters will finish each other’s poetic “lines,” completing the rhymes that way. That said, the player’s need to decode the message and piece the information together as a story is a little cumbersome, and the amount of information revealed in each dialogue exchange does not add up to elevate urgency in the main conflict. Fortunately, there are a few cutscenes to introduce major pieces in the story without "obstruction" from gameplay. These play-out more like a storybook device—similar to what I’ve seen in the Fable games—and get the player back into the storyline quickly.

Pokémon, Final Fantasy X, and Knights of the Old Republic (KOTOR) are popular RPGs I’ve embraced because of how they make turn-based combat interesting. Pokémon mixed its attack/defend/heal actions with the probability-based element of capturing creatures, and KOTOR allowed the player to make her next decision while executing his current decision. Child of Light offers its own turn-based combat flavor that makes combat fun even after dozens of battles.

The combat meter is divided into “Wait” and “Cast” sections. Selecting "Cast" leads us to three more options: A type of attack, defense, and item usage. From here, the character actually casts the action once they reach the end of the combat meter. The catch is that the movement speeds for each character vary and that, in a few scenarios, the player can actually "overtake" an enemy in the Cast section, execute her attack, and “interrupt” the enemy, forcing it to start in the Wait section. This works both ways, of course. This fleshes out the strategic component of combat by forcing the player to consider what kind of move to make, what is anticipated from the enemy, and when to try and slow down an enemy with Igniculus’ glowing powers.

’s party adds some variation to the combat and, given individual abilities, makes the combat more dynamic. This isn't too dissimilar from early 90s RPGs, like Legend of the Seven Stars and Final Fantasy.

For example, Rubella the Jester starts with only one attack, but can come in handy when dealing with enemies that slow ’s movement along the combat meter; Rubella can be thought of as a sort of cleric or buffer in countering crowd-control spells. ’s sister (Norah) can protect the party by fortifying defenses for a few rounds during combat, making the party more resistant to enemy attacks. Child of Light’s enemies also offer a wide range of attacks, abilities, and weaknesses & resistances. Some enemies will actually counter physical attacks, inflicting damage and forcing the player to employ a more defensive strategy. The AI difficulty in mode occasionally challenges the player through a battle that can last seven or eight minutes; there were only a few times when I felt I was in jeopardy of dying. Hard mode makes things a bit more threatening.

Aurora and her party members quickly level up through their skirmishes, advancing core stats, rates for critical hits and dodging, and learning new abilities. The progression system involves three skill trees for each character. The skill trees contain many of the same enhancements (i.e. raise magic points [MP] by 1, increase hit points [HP] by 5), but they’re sorted in different orders. This enables players to balance out their characters, but I don’t like how an experienced RPG player can’t immediately strategize to level-up a particular core stat or work toward a specific set of abilities.

Child of Light also presents a few ways for players to collect crafting elements; these can be acquired through puzzle solving, opening chests, illuminating orbs through free-roaming, and winning battles. Crafting elements into Oculi (second declension, plural, nominative case, masculine) can boost key stats like HP, damage, and magic resistance, and they can also add elemental effects like lightning, water, and fire. As with Pokémon, the elemental effects are more effective against particular foe varieties; for example, water enhancements increase damage against fire enemies. Elements even have their own levels of efficacy, so a player can combine three of the same element to produce a stronger version of that element.

I’ve got a few gripes with this system. First, crafting feels very limited in the earlier stages of the game because players can craft very few Oculi with just three base elements (mostly the “Rough” levels of ruby, emerald, and sapphire). Second, the performance boosts from these elements seems so minimal as to be a questionable time investment (i.e. increases HP by 4, reduces fire damage by 10%). Lastly, there are few combinations of elements that a player can actually use to make an Oculus; unlike alchemy in the Elder Scrolls games, there’s no open-ended crafting that lets the player combine any elements, even if the result produces a negative effect.

Child of Light offers a beautiful, interactive adventure defined by its immersive presentation and its innovative combat engine. Each environment stays in the player’s mind as she floats from chapter to chapter. The combat executes the time-sensitive Wait/Cast meter very well to give players more to think about when deciding their next turn and the ones ahead. There are some limitations in the depth of the skill trees and crafting, and the story’s dialogue does not support the gameplay as much as I wished. But despite my gripes, and despite not being the usual $60 title one would get from Ubisoft or whatever AAA studio, Child of Light starts and ends fresh. It’s a unique rendition of RPGs, and it’s an inspiring game that will instill the same wonderment we felt as kids.