I literally had to tear my face off of the screen to write this review. I’m starting to feel withdrawal already: BioWare’s creation is fiendishly addictive. It’s taken me awhile to write this, primarily because the game is successful to a point of intimidation. Putting a game with such astounding writing and story into the length of a review is a challenging task. Maybe one that requires a Grey Warden… 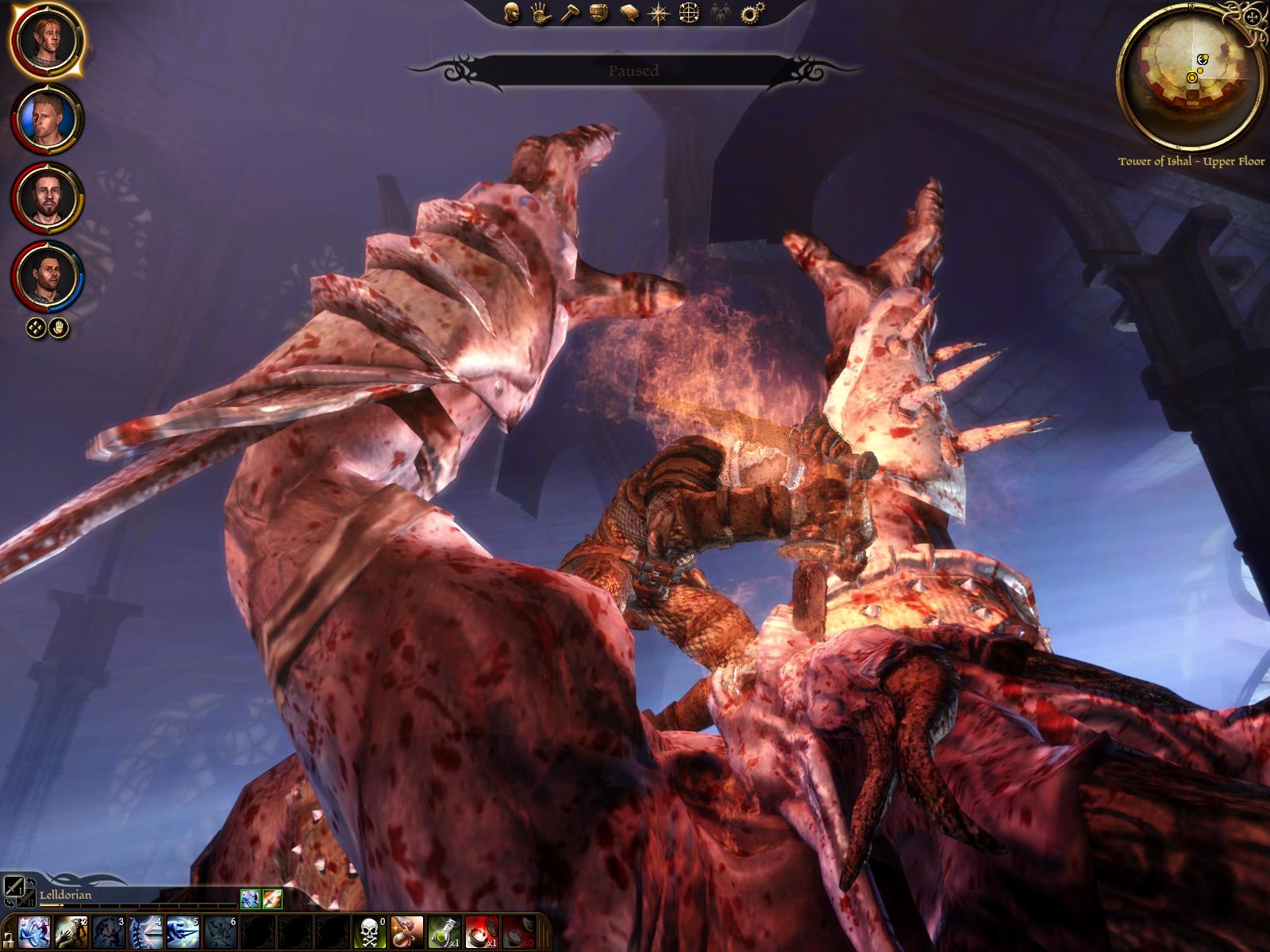 BioWare has officially become an ‘achievement whore.’ When Dragon Age: Origins was put on the table for design-review, someone said, “Hey, why don’t we unlock all game design & development achievements possible?” And so they did. The dark and twisted plot of a brood war does not pull any punches. BioWare does a great job of adding realism to their unsettling story: they’ll introduce you to a character, give you five hours of gametime with said character, and then just slay him in an epic battle. People die in this game, and not just the bad guys. Even worse, some of your party members can die or vanish forever, after 80+ hours of getting to know them, in some cases romance them, BioWare just snaps them away from you at the very last second. 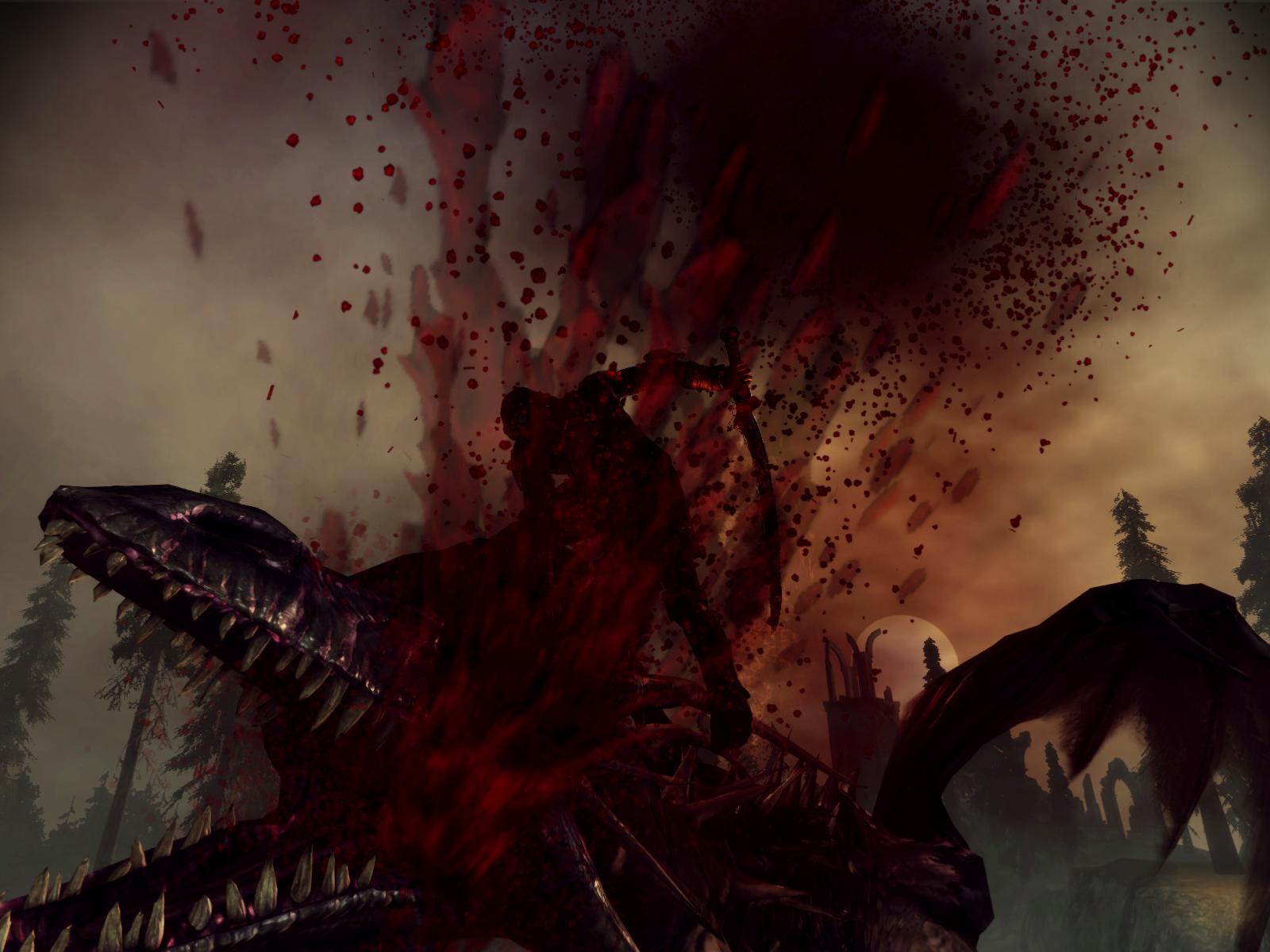 In the character creation process, Dragon Age let’s the players choose one of seven unique origins. Elves can be city or feral, dwarves might be nobles or commoners, and so on.  These origins have an immediate impact on the game, and fortunately, almost all of them pull you into the environment immediately.  Some tragedy has befallen the player, sweeping him from his once-humble lifestyle into a compelling event forcing him to make decisive actions. These actions, while sometimes can have funny context or overtly sarcastic responses, have an extended impact on the way characters interact with the PC, and ultimately, the way the PC should (if he remains in character) interact with the world. Many clanmates and GN members decided to play through the game as a sterling knight or benefactor the first time; I decided to play as a bipolar mage that alienates all potential followers. This eventually led me into a very challenging game, where I’d switch between being kind and being a total ass to those I encountered (hence bipolar). 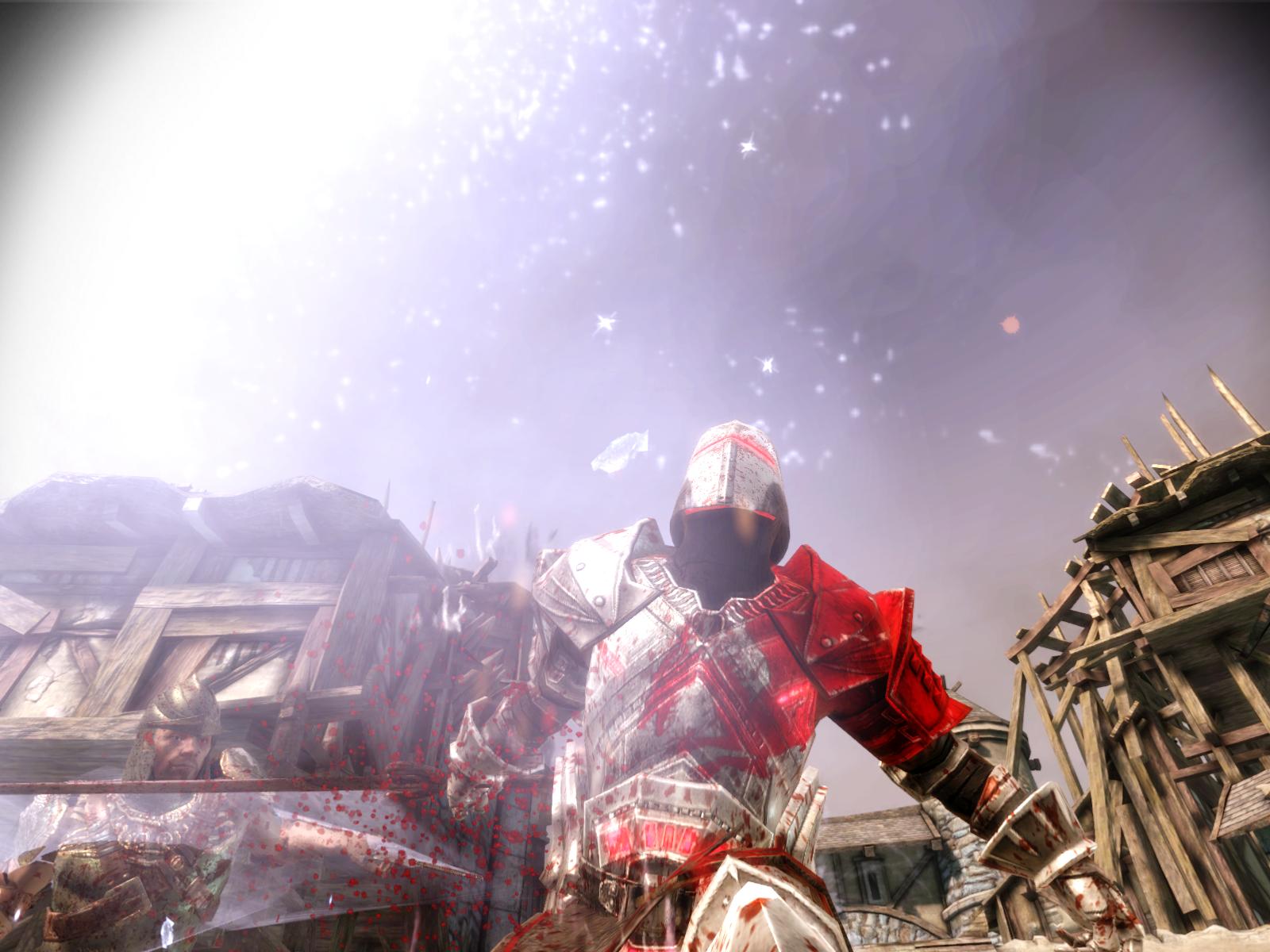 I ended up playing through the whole game as a swashbuckling city-elf. The dialogue choices really make the game what it is.  Dragon Age is more like playing through a choose-your-own-adventure book, in that the best parts of the game are in the cut-scenes – not the combat.  Decisions, decisions, decisions; that’s the entire game. In my origin, a malevolent human had kidnapped most of the lady-elves in my village on my wedding day. This event led me to chase him down and either execute him or let him free; I chose the former. These occurrences brought me to a role-play verdict, where I pronounced my eternal hatred for all humans from here-on-out. Case and point, a human later that day said to my elf, “I understand congratulations are in order for your impending wedding,” to which I responded, “Let’s talk about your impending beating.” 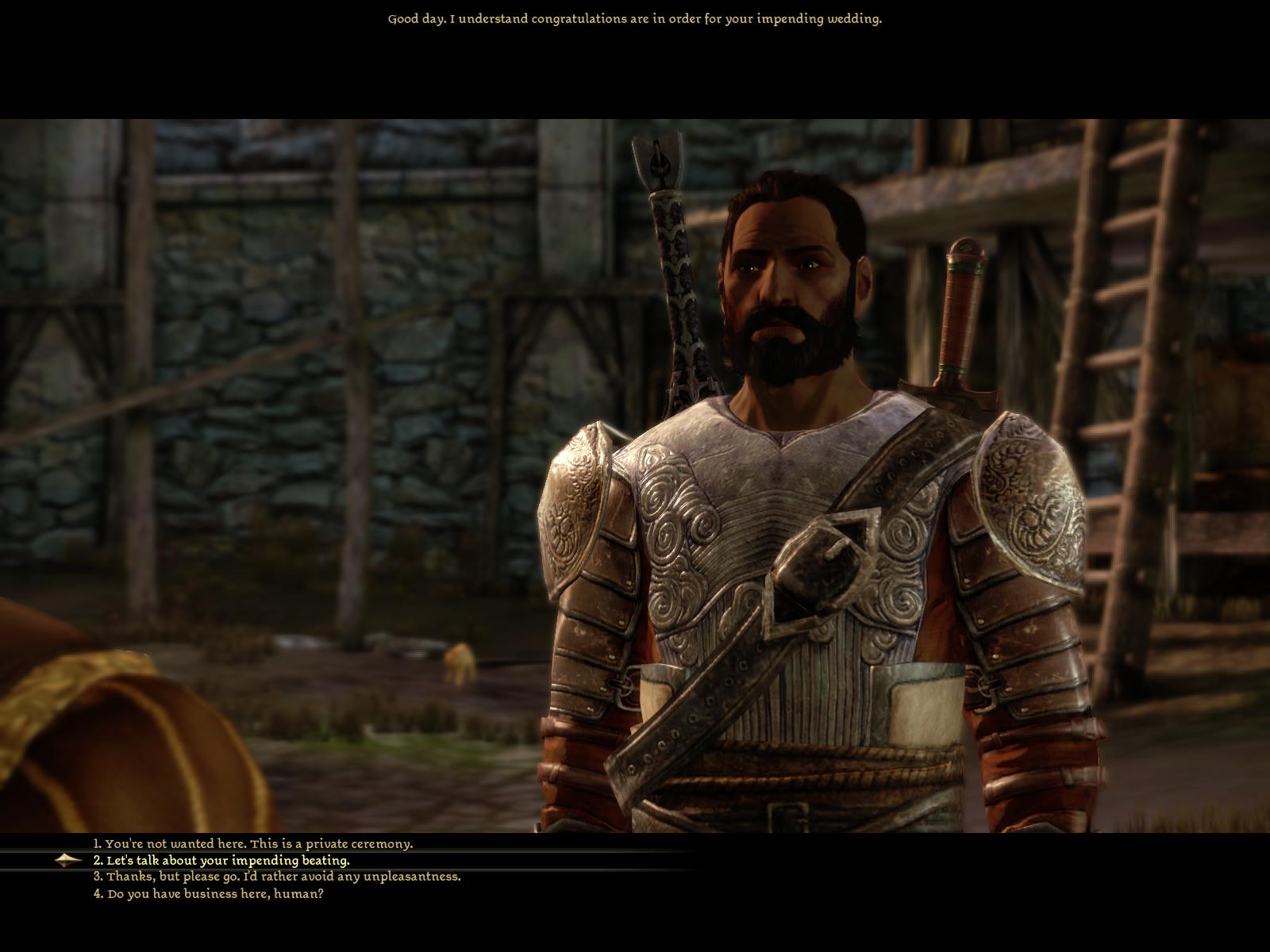 With so many sarcastic undertones present, it’s almost a shame to not play through the game at least once with a d-bag character. There is an infinite expanse to grow your character’s traits: pet peeves, quirkiness, gallantry, valor, silver-tongued, and more.  Dragon Age is a true homage to Dungeons & Dragons; previously, the only thing RPGs have sorely lacked in daunting comparison to D&D is the freedom of choice when roleplaying.  BioWare has accomplished a before unattainable feat, they made a singleplayer game that feels multiplayer. The Hero is not alone in a vast and, in the case of Oblivion, boring world for once. He has the ability to surround himself with friends and allies to stand against the hordes of darkness. You can take that to the Oblivion Gate and cash it. 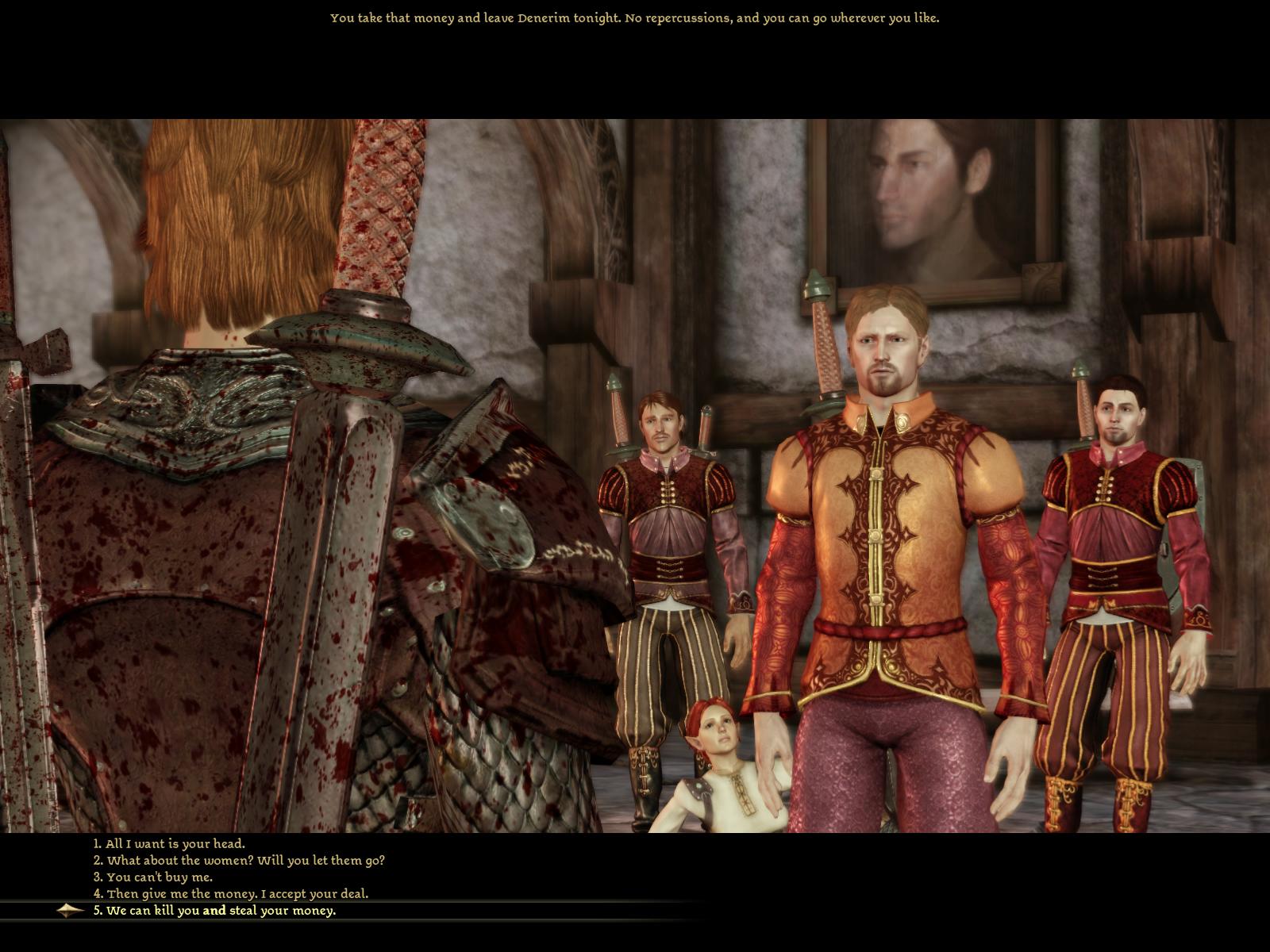 This is how I do diplomacy.

The game is entirely embedded in cut-scenes; I found myself rushing through battle sequences toward the game, dying to know what happened to my comrades. You will find yourself feeling helpless without a cinematic to talk your way through. Unfortunately, the biggest backing for the game is also its biggest (and possibly only) downfall. Moving from flawless cut-scenes with well-rendered characters into a totally different world of combat is not what one would call seamless. The combat doesn’t look bad, but it looks nothing like the cinematics we’ve seen at tradeshows and on TV. Being a game that’s been in development for over four years, there are a couple of areas that stick out like a sore polygon, more toward the beginning of the game than the end. Trees with three sides, leaves fill-bucketed green, and 2-dimensional stones are a few worthy of mention. 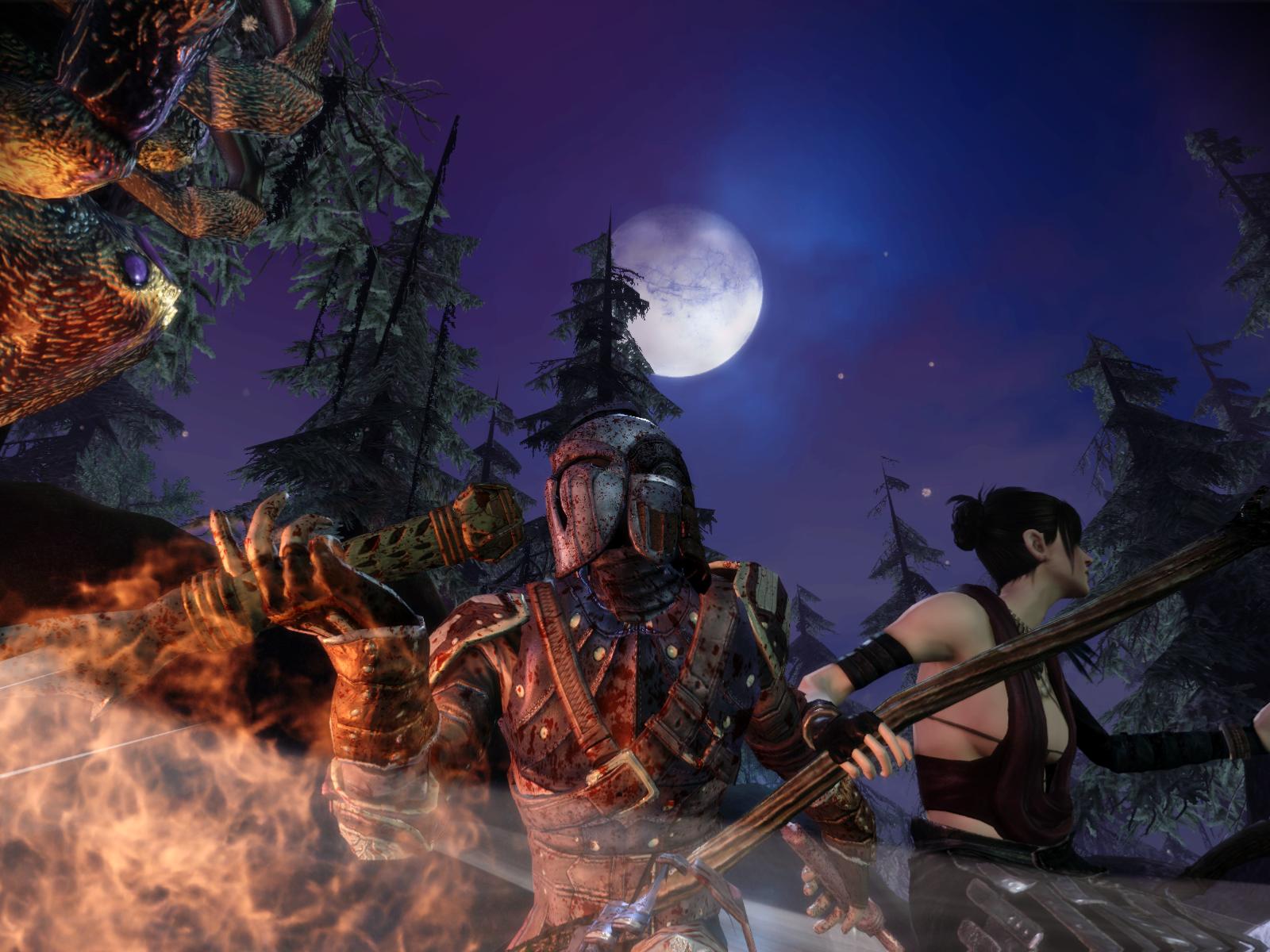 Dragon Age isn’t just a game, it’s an interactive movie – and I don’t mean the kind from the 80s. With all the different dialogue choices, the first play (or save) through you’ll feel in total control. The second time, though? Disappointingly, you will notice that many of those choices lead to the same response from the NPC (although, it could be an entirely different result).  Where “Die, scum!” might force the NPC to respond with, “You fool!” the choice “Let’s talk about this” may very well lead to, “You fool!” 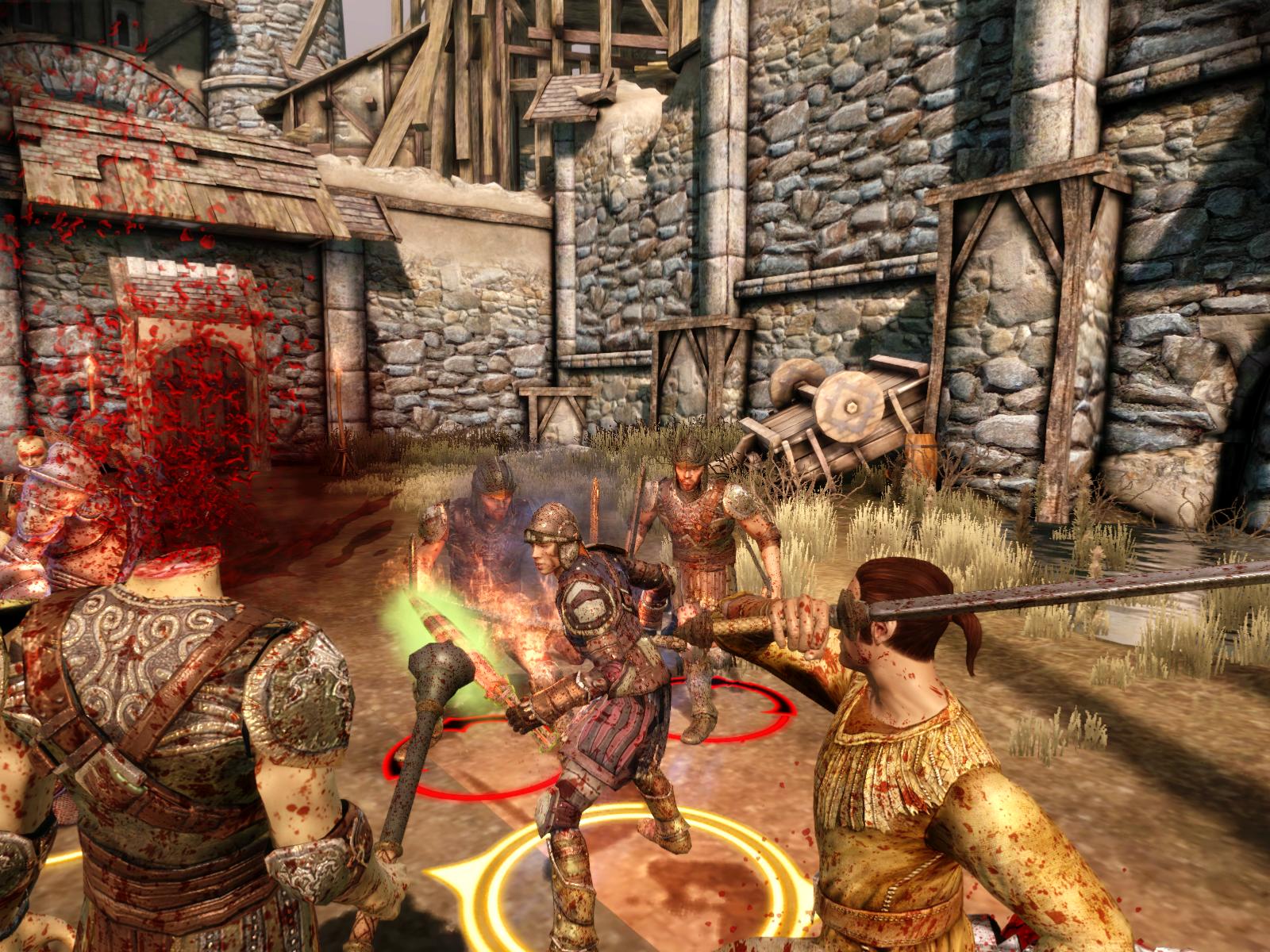 Where gamers lose their grip with DAO most certainly is within the confines of building relationships with party members. I played in a somewhat cheap manner, but stayed true to my character – I was a swashbuckling elf, looking out for no one other than myself. If being sympathetic with implied pathetic party member led to a more profitable end result, all the better for me. Of course, this means I pissed none of my party members off, which is unfortunate. If I had 80+ hours of free time, I’d try the exact opposite. 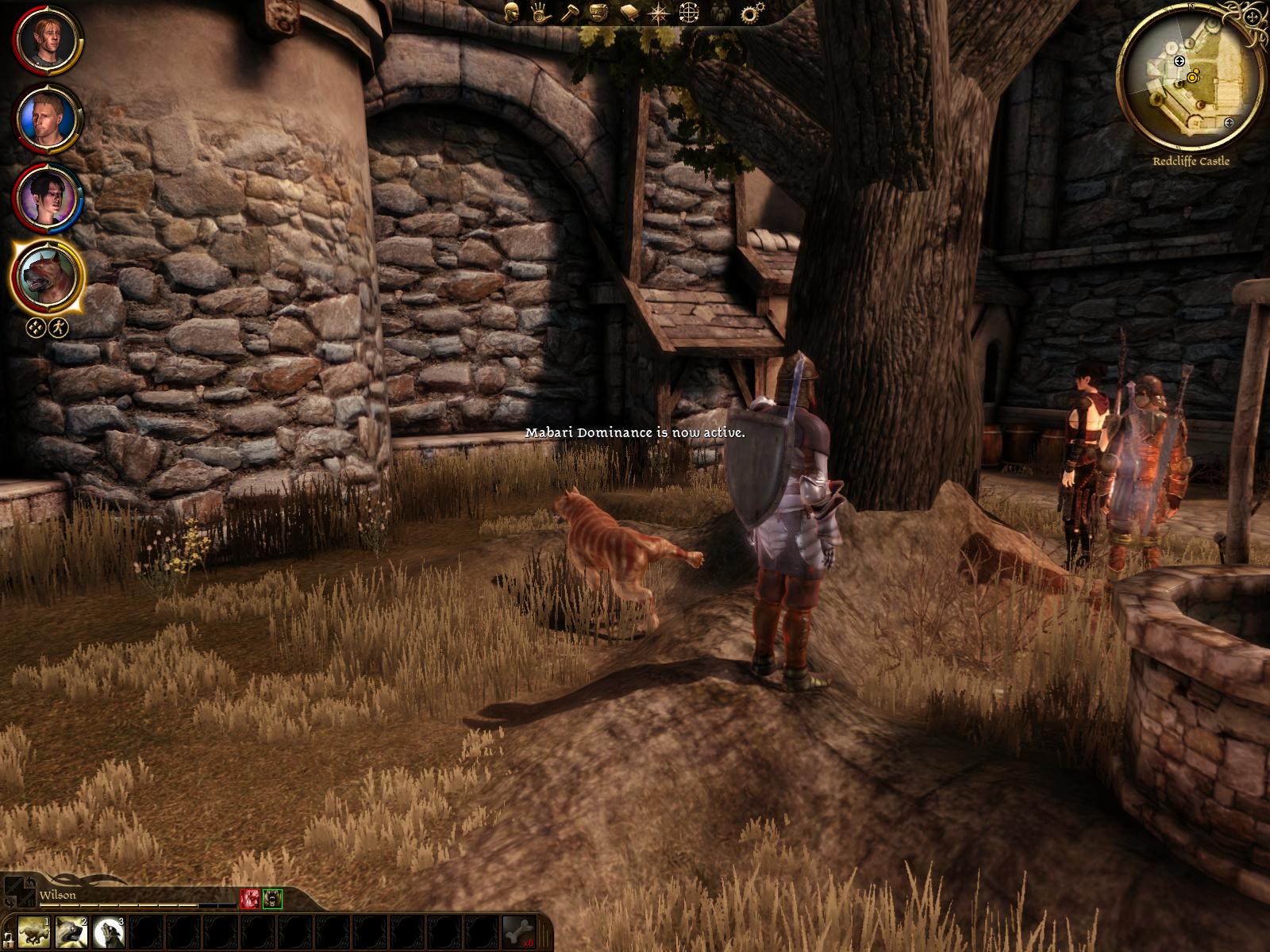 I told you to go before we left!

With all of this greatness, some very important RPG aspects are lacking. As players level, and this is the golden rule in MMOs, tabletops, and hack-n-slashing, they will be infused with a sense of power. This powerful feeling is overwhelmed by the lack of equally potent equipment: gear is bland and unoriginal, there are a few ‘best’ armors in the game, and the heavy-plate tree will lead to more choices than, say, the leathers tree. Rogues and Warriors should have the same ultimate ability to look and feel plain badass. Thankfully, BioWare is seriously catering to the modding community, so that should be solved shortly. 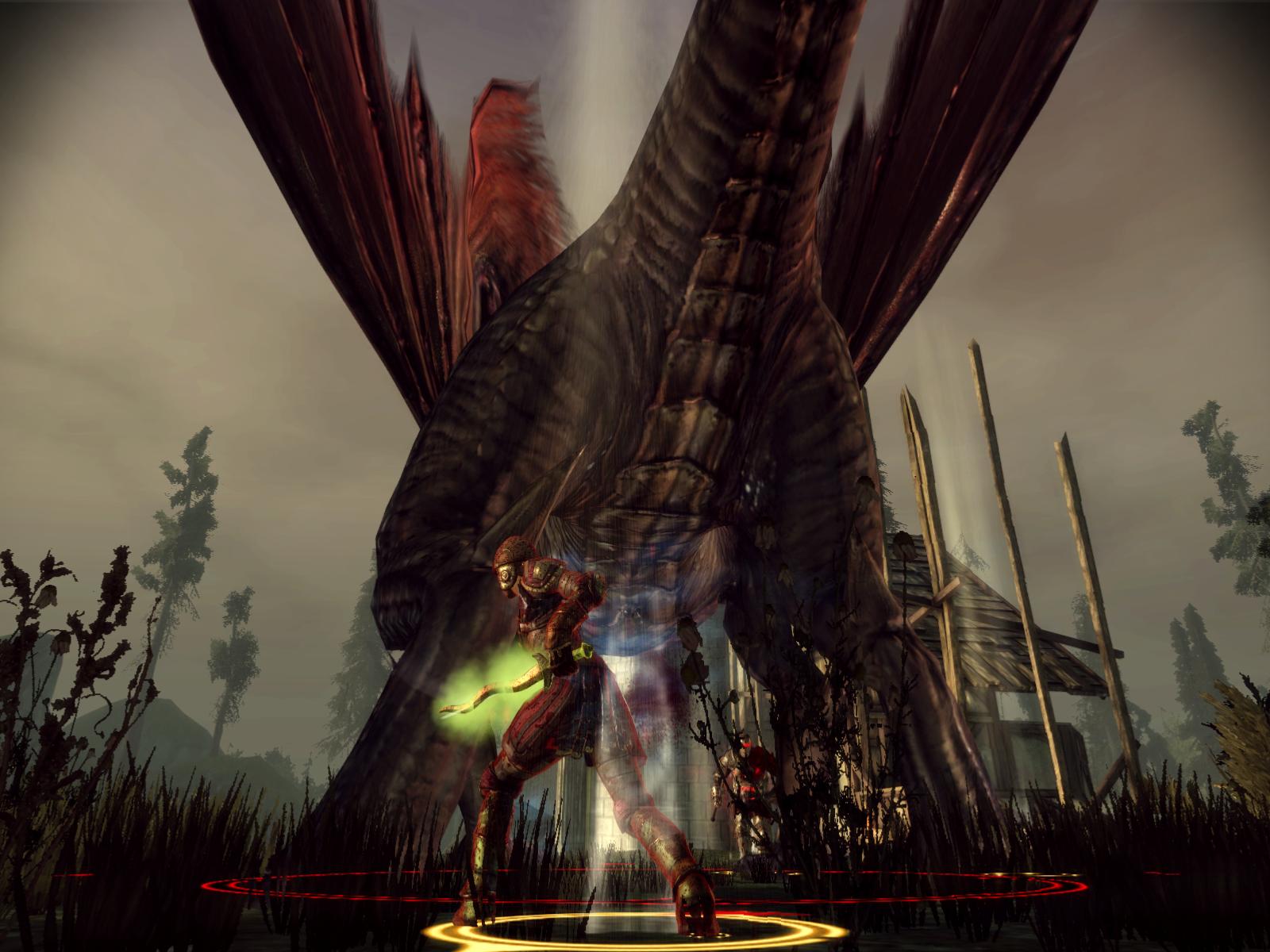 This is how you make the best armor in the game: Dragon Shit Armor.

Dragon Age has the ability to suck players in and captivate them for hours on end; you MUST complete the next mission immediately, Ferelden depends on it. DAO has a means of making you feel like a pivotal point within the game world, everything evolves based on you. The NPCs constantly inform you that time is short, the Darkspawn are upon us, we will die if you don’t do something. Of course, once you realize there is no actual clock within the game, that illusion is broken, and you might find yourself lost in aimless side-quests. BioWare has a terrible habit of adding so many side-quests that the completists among us get lost within them, and inevitably, lose interest in a game that plays out masterfully if you only ignore most of those off-topic items. 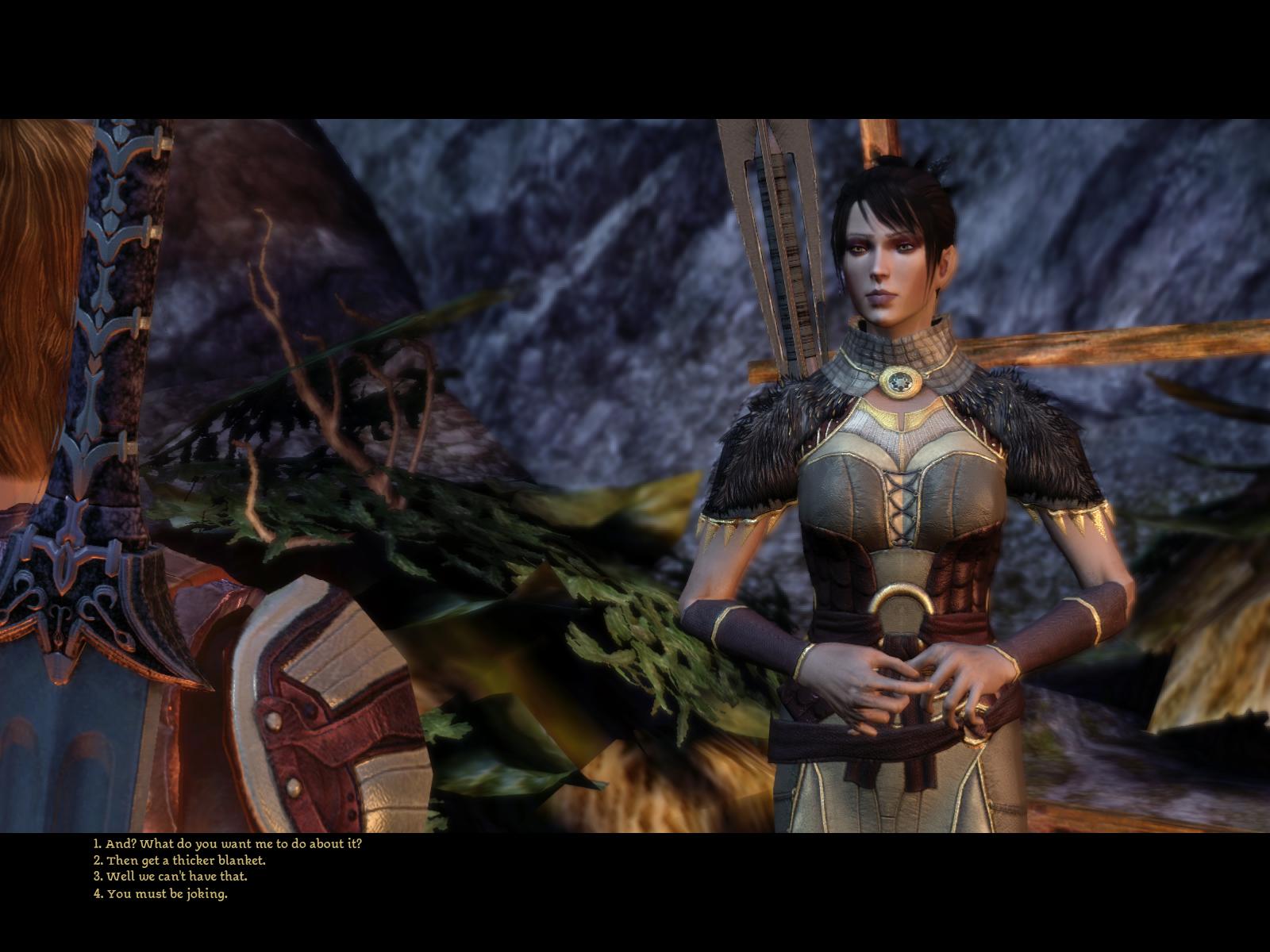 Bad: Lots of pointless side-quests, the sole purpose of which is to grind for gold. Shifty graphics in certain locations. Not enough items to start with. Launching a game with DLC available is bad for business. If it's available launch day, it should be free.

Overall: With everything from romantic subplots to epic clashes with a nemesis of godlike ability, Dragon Age is a roleplayers paradise and nightmare at the same time. Speaking of time, you’ll need a lot of it. This isn’t a game where everyone wins either, I’ll make that clear. Schadenfreude is one of my traits that perhaps makes me a strong critic of such games. There is one quest you can’t win, and life-changing decisions are forced upon you toward the end – so make your decisions leading up to them wisely.