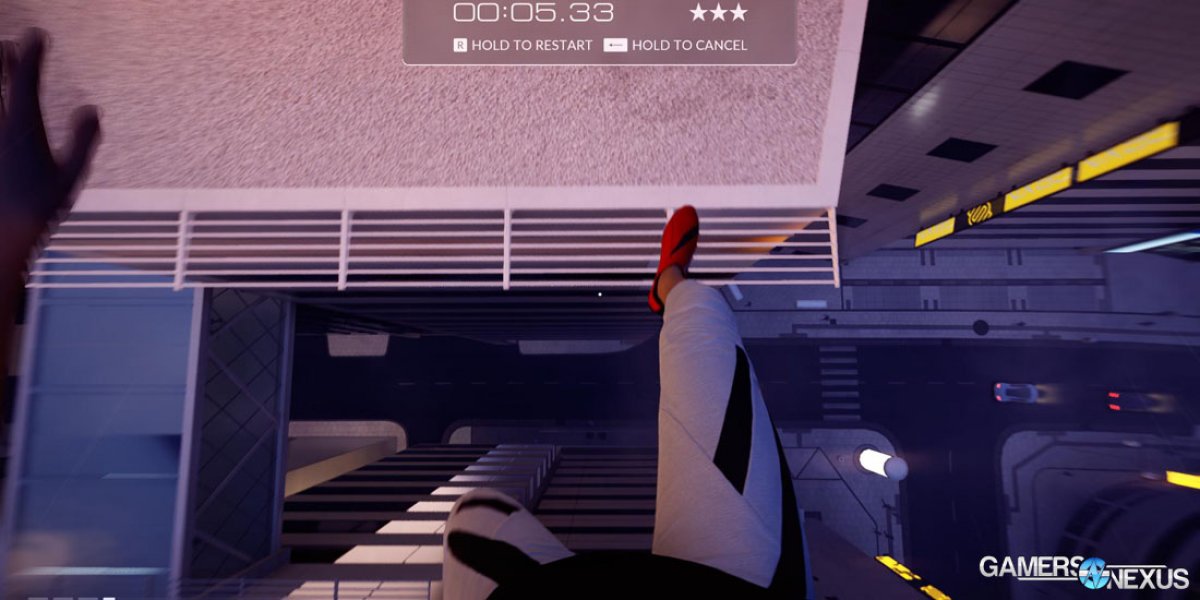 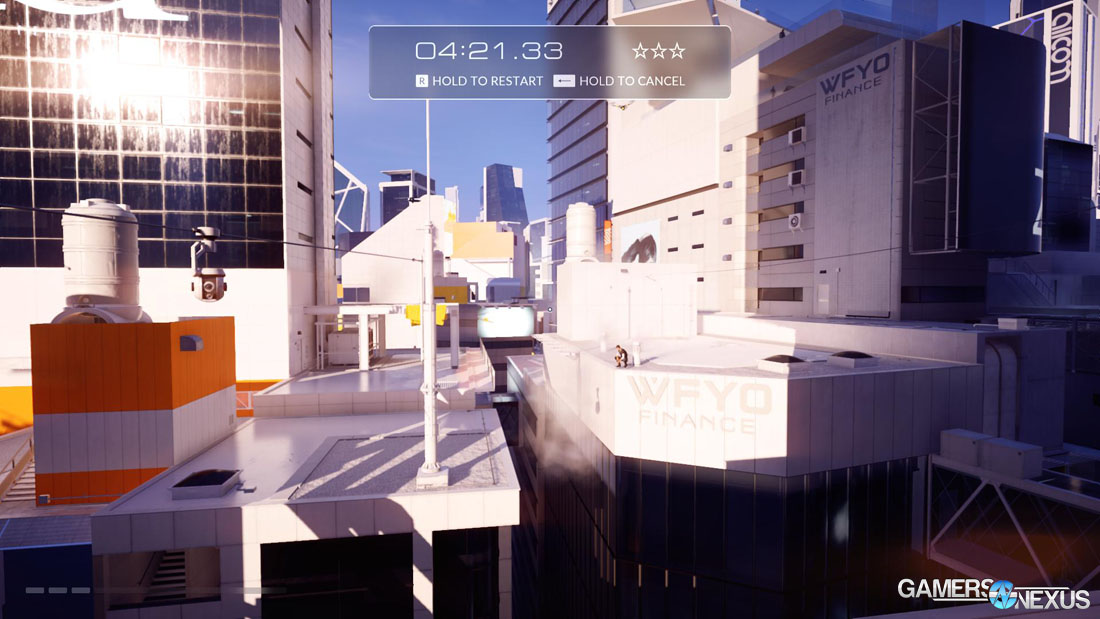 This visual mechanic was one of the most memorable aspects of the first ME and carries over to this one as well. The bright red stands out strongly against the whites and grays of the rest of the world, enabling players to navigate completely new areas while maintaining the game's signature play speed.

Catalyst adds ‘runner vision,’ giving the player a path they can follow. This path is actually a massive pain to follow, since it’s not static and disappears around corners and obstacles; however, at certain points -- such as when corporate security agents are opening fire -- following the line is absolutely necessary. The result is being mowed down when the wispy red ‘runner vision’ disappears from sight. The ‘runner vision’ also gets turned off at certain points during a mission, but this makes sense, since it’s at points where the game wants you to platform and search for the path -- rather than hand-feeding it to you. Really though the ‘runner vision’ feels like a bit of a cop-out, where the previous title used more subtle means to get the player around a map -- ‘runner vision’ is both heavy-handed and poorly executed. The new runner vision can be turned off, but that’s not necessarily recommended on the first pass through the game. 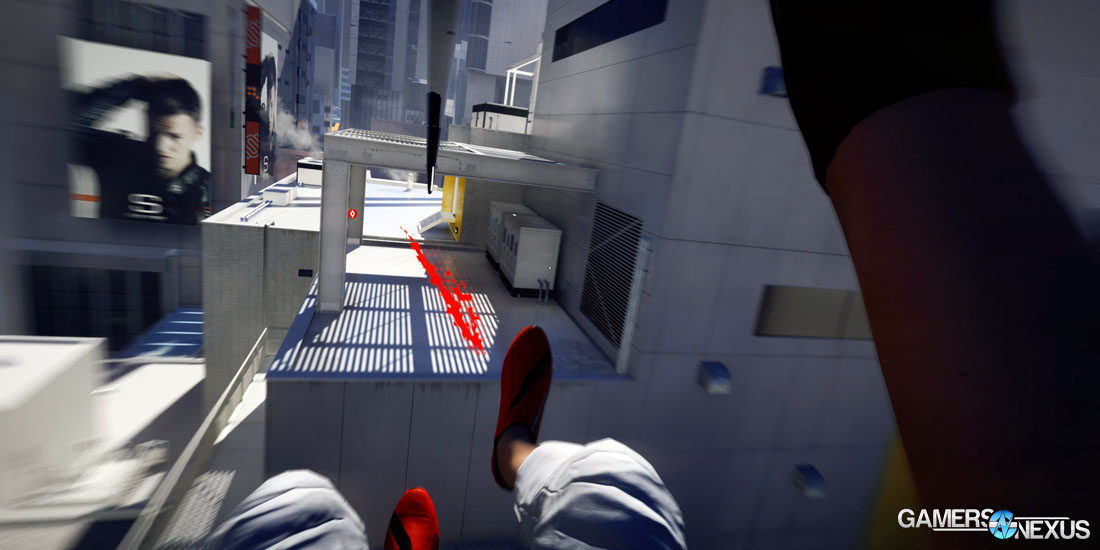 The other key aspect of ME's visual style revolves around the game’s perspective. Faith’s limbs are visible as she runs and kicks, accompanied by a certain amount of headbob as she runs and jumps. Both ME games carefully ride the line between including enough head movement to make actions in the game feel more realistic and meaty, but not too much that it nauseates the player. EA/Dice fuse this camera perspective with strong, resolute sound effects that create a visceral parkour experience -- this is where Mirror’s Edge shines. Big jumps, collisions, and climbs all feel more real than in other FPS titles.

The high visibility of Faith’s limbs in the player perspective also gives combat a more connected feel. Combat is forced at a few points in the fleeing-centric game, sometimes resulting in incredibly frustrating levels -- like an arena level where we’re forced to fight off waves of baddies, completely ignoring some of the game’s core parkour mechanics. This changes Mirror’s Edge completely from one level to the next, and strays too far from what it does well. The game comes across as trying too hard to invite more combat-intensive playstyles; in reality, combat is meant as a mechanism to force past guards only when absolutely necessary. This is even conveyed to the players early in the game, when Faith makes a comment to a compatriot about needing to take-down a guard, whether she wanted to or not. 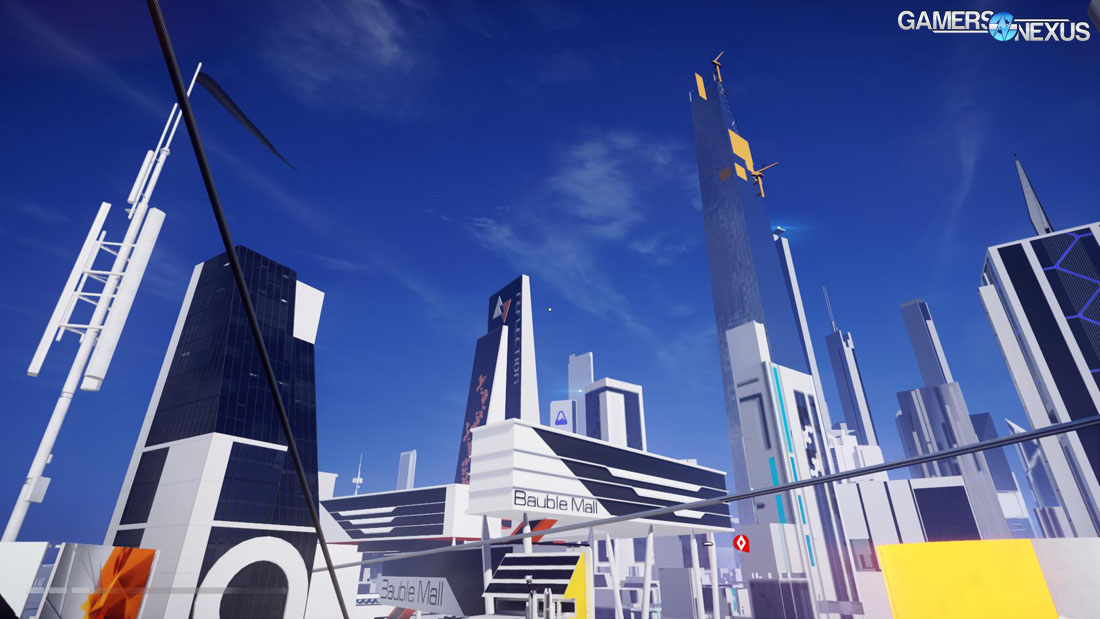 Catalyst starts to show more weakness in the details. The open rooftop world of Glass is positively covered with collectible objects for Faith. In most open world games -- Black Flag comes to mind -- this provides a nice little incentive to explore the world. In Catalyst, though, the gameplay itself isn’t conducive to seeking-out these collectibles. Many of the side-quests are timed, so stopping for a collectible would mean failing the quest. Collectibles also battle with ME on a more mechanical level: Momentum is gathered as speed is maintained and the player avoids stops or hard turns; to stop and collect every seen item ruins the flow of the game, and feels counter-intuitive to the heart of Mirror’s Edge. I often found myself running past some item just because I didn’t feel like stopping and losing all my momentum. The game’s speed and mechanics are enough of a reward, and working up to that flow often felt more valuable than stopping for some unnecessary item. Besides, the collectibles really aren’t all that enticing. They don’t uncover much in the way of lore, and quite a few of them are required before unlocking upgrades.

The game’s open world push also feels unnecessary. The openness fields the player optional sidequests -- but these are all short time trials on the same map. We ended up spending a lot of time travelling between main quest hubs or to the starting location of a questline -- it’s tedious. This time is “supposed” to be used to look for time trials or collectibles, and we’d wager that the buzz-word here is “integrated” -- an open-world is a more “integrated” means of building-in time trials. We wholly agree with time trials for the game, but the original Mirror’s Edge menu system made more sense.

Because all quests seem to be given out at the same hubs, ME Catalyst might as well have implemented a system more similar to recent Call of Duty titles: The player is automatically returned to a central hub in between missions, where they can replay missions or take on sidequests. Catalyst already jettisons us to various in-game hubs anyway, but the variety is only a facade to create an appearance of necessity to freerun the open world -- they’re really all the same, bouncing us back-and-forth like pinballs.

The point of time trials and mini-games is to offer players an escape from their escape -- a means to break-up the potential monotony of a digital world. By shoe-horning the time trials into the open world, there’s no escape from it if boredom sets in.

This whole part of the game -- collectibles, an open world, and time trials -- feels like a forced attempt to push a little more content into a game that really didn’t need it.

The single, out-standing positive gained by the open-world element of Catalyst is the ability for player-made time trials. Catalyst gives players the option to make their own time trial courses to be shared with the world. Time trials can be made within an existing level (effectively an instance), or within the larger open-world for more pathing options.

At time of review, there weren’t any player-created time trials of note -- the game was just released -- but we’ll keep an eye on this going forward. 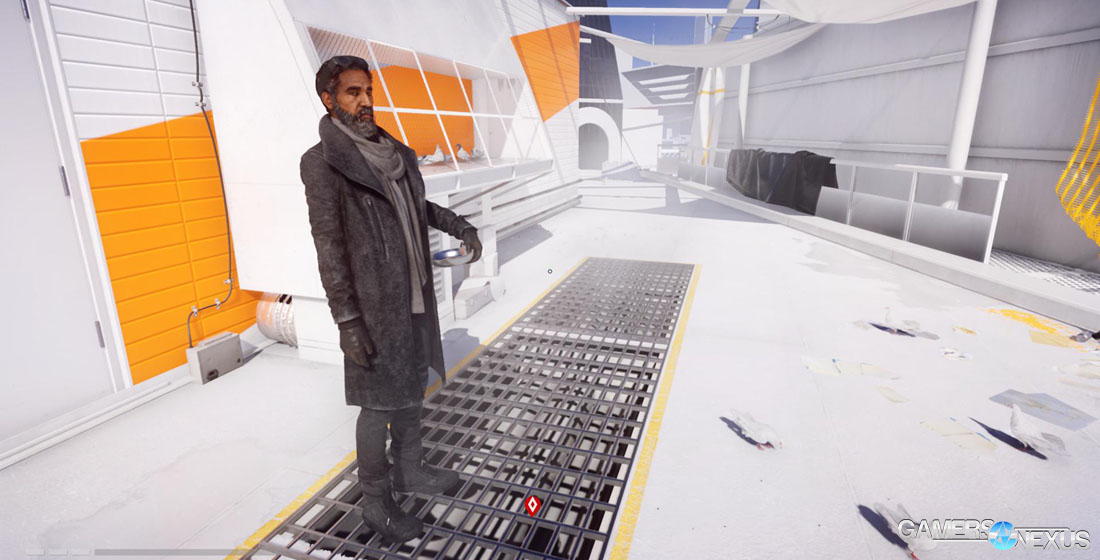 Far and away, the most annoying aspect of the game is its characters and writing. Nearly all of them -- including Faith -- seem to be full to the brim of angst and edginess. They bicker, quibble, argue, and complain about every little thing. Everyone is annoyed at everyone else for some reason or another, or no reason at all. And it’s all pretty ceaseless. Middle-school let-out, and everyone’s trying to do parkour.

The only character I remotely liked was Noah -- Faith’s adoptive father-figure and head of the network she works for. Even Noah falls to argument with everyone (about everything), but he was at least a bit more sensible in demeanor.

The story and setting aren’t particularly enticing standalone. Glass seems to be an amalgam of every dystopian metropolis we’ve seen before in games, books, movies, and other media. Citizens have their privacy invaded for the sake of security, all catalogued into a network. The city itself is run and controlled by massive private companies that constantly fight each other for dominance over the city. Faith is orphaned at a young age when her parents are killed in front of her because they tried to stand up to the big bad corporation baddies at Kruger Security, and now Faith is a rebel with a cause. She just happens to fall into possession of some important information about Kruger Security, and so now she’s gonna take them down.

But when the setting and plot points are so predictable and rehashed and the main character is unlikeable, it’s hard to feel strongly about any of it. It keeps the player from really empathizing with characters or from being pulled into the world and it makes little things -- like a pipe across a catwalk -- really stand-out and remove the player from the experience.

Traveling uneventfully across the same map just to go back to the same hub gives the player the opportunity to question the game further. The ‘runner vision’ and its inconsistency constantly makes player shift from a sort-of autopilot to suddenly being dead or stuck and having to completely change mindset. This all really a shame, because the basic mechanics of ME Catalyst feel fairly intuitive and enjoyable to use. The main quest levels are fairly fun and navigating them is engaging (until something like the characters or ‘runner vision’ get in the way). Other than being on the same map space as the rest of the game, time trials are well-designed and challenging -- a built-in leaderboard provides incentive to keep trying them. But the way the time trials are built into the game is just a bit obtuse. Despite being built around some well-made mechanics, and with many of the levels actually being pretty enjoyable to navigate, ME Catalyst is held back heavily by the open-world aspects, setting, plot, and characters.