Blood-curdling screams echoed forth from the once peaceful keep. Steel clashed with steel, crossbow bolts found their way into chainmail, and catapults sent limbs flying. My unit of about six had just spawned as reinforcements to the already bloodied warriors. 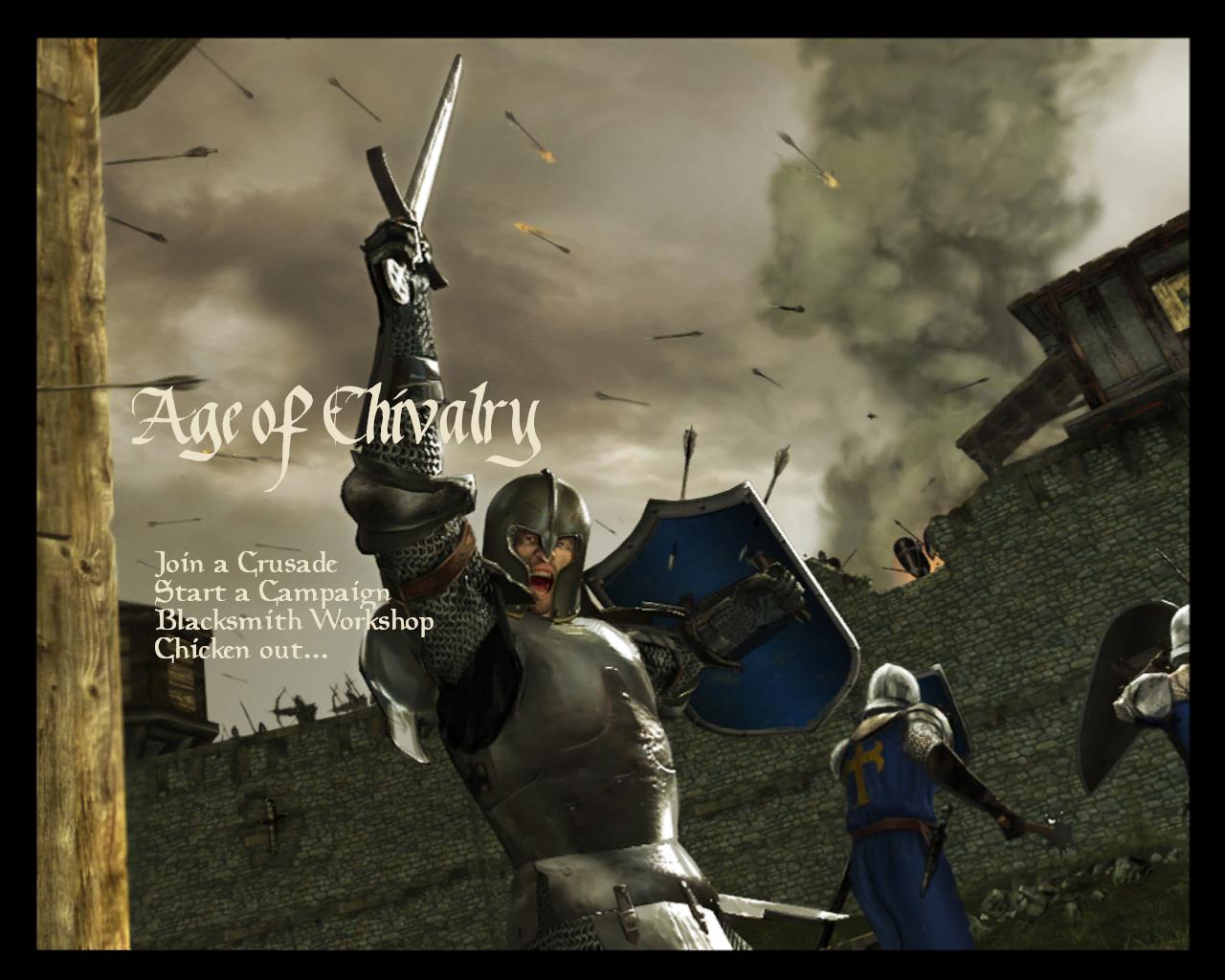 I was a Knight of the Masons (the red team) equipped with a colossal warhammer. It had been my first time playing, and the self-appointed commander of my group was explaining our objectives, allowing me only about 30 seconds to learn the controls, just enough to understand the flow. The exploration of my equipment was interrupted by the commander's in-game war cry, "Charge! Kill them! Kill them all!" I followed his lead into the fray, using the built-in taunts to scare my opponents (or more likely, make them laugh), my character shouted: "You sure have a lot of armor on! Overcompensating for something?" I tested my hammer for the first time against a grunt wielding a spiked-flail and heavy shield. He swung his weapon wildly, clearly oblivious to the 'stamina' bar, which limits the player to a certain number of attacks/sprints before being forced to rest. His attacks made me keep my distance, and I elected to retreat to the castle's moat where we could fight it out in knee-deep water. He managed to smash his spiky-ball of doom against my chestplate, draining about half of my health. I took the opportunity to retaliate while he was still recovering from his swing, using the right-click power-attack to bring my hammer down upon his head. I felt the crunch of his skull under my warhammer; these waters will run red with blood! Well, they would have if I hadn't been nailed into the wall by arrows. This is where the famous source physics engine comes into play: arrows to the chest will blast players off of battlements, hammers send the Agathian (blue team) knights flying, swords send heads rolling, and catapults create an explosion of bodies upon impact.

Age of Chivalry boasts classic FPS gameplay reinforced with innovative use of both ranged and melee standard medieval weapons. Team Chivalry successfully eliminates mindless shooting and instead introduces mindless crushing, killing, maiming, and destroying. The player is one of three basic classes, each with its own set of three sub-classes: The Knight, an adept footman, or a swift and deadly archer. The sub-classes are broken down as fast & weak, slow & powerful, and balanced. For example, the archer subset is as follows: wield a slow-to-reload but sure-fire kill crossbow, a fast-reloading longbow, typically requiring two-three hits to kill, or a Javelin & Shield, enabling the player to go melee with a reach if need be. This abundance of classes and weapons allows for every player to find his or her niche; not to mention, it offers maximum replayability, especially since the game is already fairly balanced. Regardless of whether you are an archer, a halberdier, or a knight that amputates limbs for no charge, everyone gets their chance to shine in his/her own specialized class.

In essence, AoC is just a source mod with melee weapons. What really sets this mod apart? Right up there with its team play and skull smashing is the movement away from option A or option B objectives, where the round restarts after the objective is complete, and the push into story-based objectives. The following is a standard objective layout: Push a ram to the gate > batter it down > charge inside and kill the peasants > kill the prince > win. Furthermore, depending on the outcome of one map, the next map is determined. For example, if the Masons lose hold of their keep in map A, they must invade an Agathian castle in map B. Other objectives include: rolling enormous siege towers to the battlements, defending villagers, and even re-enacting the invasion of Helms Deep.

It would suck to trip while running with THAT axe.

Unfortunately, another objective in the game seems to be figuring out how to get unstuck from the ladders, finding a decent server, or ducking under the lag-ray of death. Age of Chivalry also lacks smaller maps, making it hard to play with fewer than 10 players. I have seen many a player rage-quit from servers purely through confusion, considering being inept at finding the way out of spawn can be a bit discouraging. Just make sure you follow the rest of your team the first few times.

The game loses its feel of chaos and impending apocalypse without a 32-slot server, and if you manage to get into a larger server, you better hope there is no lag. In the average FPS it is possible to play with a little bit of lag, however in a game where every movement takes a toll on your stamina and ability to block or backpedal, the tiniest spike will derail your gaming session. Archers will rarely connect while lagging and warriors will be slaughtered from up to ten feet away by teleporting knights. Have you ever been shot and killed in an FPS, even though you swore that on your screen you were around the corner? That's what lag does in this, only you will be shouting that you were fifty feet away and somehow the halberdier managed to poke you!

The Good: Intense multiplayer FP melee combat, average ranged combat, and a decent balance between the two. A strong mix of genres (traces of FPS, RTS, and RPG) will invite gamers from across the gaming universe to compete head-to-head. Chaotic warfare keeps players drawn-in. The blatant lack of hack'n'slash gaming means that players are required to actually think before slamming buttons or throwing their mouse across the desk. The age-old FPS genre is resurrected with a refreshing look and feel, not to mention stunning graphics and textures accompanied by sparkling water effects that set a milestone for free games. A major bonus is that the mod team has already displayed that they care for their creation, and will continue to improve it with players' suggestions.

The Bad: There is a fine line between owning and getting owned, due to new weaponry and controls, but once across the threshold the game becomes infinitely more entertaining. Age of Chivalry attempts to have a storyline, however lack of explanation and reminders that one even exists make it forgettable. Minor bugs such as getting stuck on ladders can reduce the experience and immersion greatly, especially when you see some moron in front of you (probably me) swinging violently at the wood prongs in vane attempt to get unstuck (Hint: crouch, jump, and move forward all at once to detach yourself). Lag is more of a game killer than usually, making it near impossible to predict whether you should dodge or counter-attack. Mass chaos is likely to confuse gamers, and certain maps only make the game even more confusing.

Overall: Age of Chivalry is the best multiplayer first-person medieval game/mod I have ever played. The game's lifespan is measured in 30-minute to hour-long bursts of entertainment after the first session, since there are only so many ways you can complete linear objectives. The mod development team is committed to their work, proving their devotion early by releasing a large bug fix, hopefully alluding to new maps, game modes, and archer animations in the future to keep it fresh! Team Chivalry has concocted a potent brew using just a hint of strategy, a dash of roleplay, a tablespoon of tactical gameplay, and a bucket of blood that will attract gamers from across genres.