Warlock - Master of the Arcane Review

Warlock - Master of the Arcane is an intriguing amalgamation of Disciples, Magic: The Gathering (I'm going somewhere with this), Heroes, and the Civilization series; the game combines powerful, player-cast sorcery with standard turn-based global domination, adding a bit of unique strategy to the mix in a number of ways (including multiple worlds per game, different unit races, and special upgrades - all discussed below).

So it's a strategy game.

But there's a bit more to it than that. Warlock has stumbled into an interesting formula: Wargamers and tabletop fans will find that the game shares a lot of commonalities with favorite tabletop miniatures or board games; TBS players may find it similar to, as stated, Heroes or Civilization; and casual players should get some worth out of the game for its "build up and win" approach, which has one of the best ramp-up learning curves I've seen in recent strategy games.

The core of the game comes down to a few familiar mechanics, but each is modified enough to keep things fresh. Each of my games I've played comes down to this sort of flow:

There are three fundamental resources in Warlock: Gold -- which is used to, you know, buy stuff, Mana, and food. Mana - as usual, used to cast spells - can make or break a game in a clutch decision. One AoE firestorm could bring down an opposing enemy army, a harvest spell can temporarily turn a hamlet into a massive provider of food, and the enemy can crush your seemingly well-planned invasion with a single, timely spell. Those ships you just sent to cross the channel and assault the fortress? Yeah, shouldn't have clumped them so much. They're all dead now. 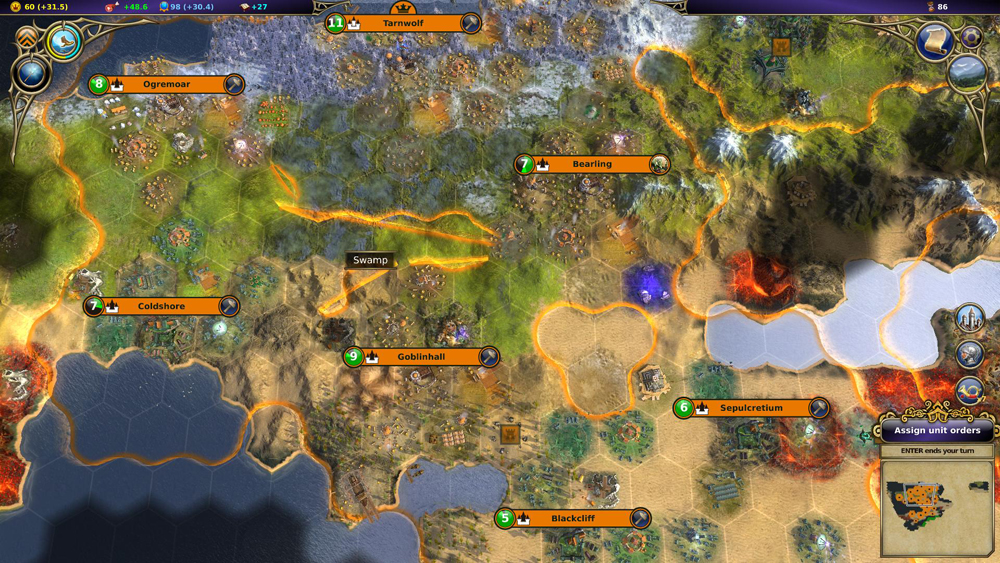 MTG players might associate these spells with sorceries, and if I'd suggest any form of mechanics change to the game's designers, it'd be the implementation of instant-equivalent spells -- a few special spells that can be cast on anyone's turn, or something to that extent, which would only further the unpredictability of the game.

That's its strong point, after all. Just when you're cornered, it's possible to cast the right "stalling" spells while training powerful units to turn the tides of war. More unpredictability in strategy games, as long as it's fair and players can understand why they won or lost, is a good thing in my eyes. Unfortunately, without any multiplayer functionality, there's no one to share these mechanics with.

City development isn't anything new in Warlock, but there's a streamlined progression of technologies to unlock and the tech tree is simple enough to follow. There are three major races - humans, beasts, and undead - each with a unique-but-similar list of options for units. 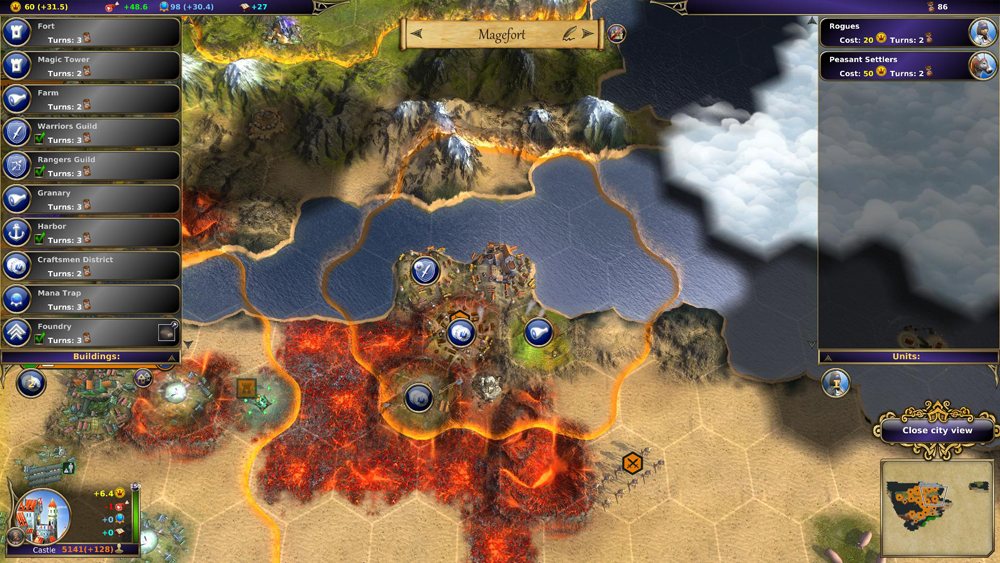 This is where I've relocated the humans: it features a golf course, sea-front property, and volcanic wastes.

I did find myself encountering a "there is insufficient population" message in Warlock - Master of the Arcane quite frequently (which disallows construction), and after searching for how I could increase population, I eventually decided to just use the pop-up icons on the right side of the screen to track when construction could be done. The only way to boost population - at least, the only reasonable method that I found - is to use spells to increase city growth.

So that speaks a bit to the game's usability, I suppose. It has a reasonable interface, but the messages are vague and, despite the decent tech tree progression, tends to be a bit confusing or misleading at times. The first game was actually surprisingly exciting, but my excitement turned to frustration as I came to grips with the odd building system (buildings don't cost anything other than time, and there's no clear explanation of population growth). 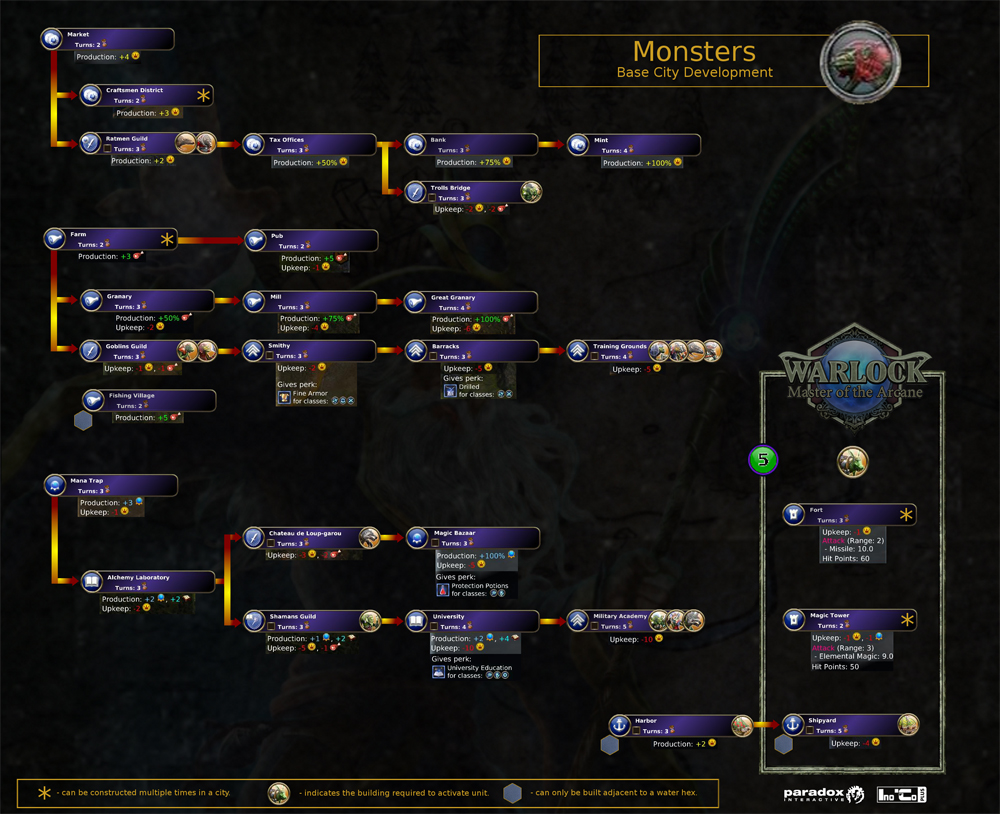 It's not much, but it's not bad. Click to enlarge.

Further on the usability front, I found myself constantly wanting more metrics and control -- sure, I don't need anything to the level of Victoria, but some Total War-esque tabs that tell the current production, buildings in all cities, all units (sortable by level and type), and other similar options would have made the game much easier to track. Things start to get out of control after a few hours of play, but good players will find their own methods for tracking units and progress.

Some of this is negated by the game's easy-to-customize "Great Mage" system where, at the beginning of a game, you can choose specializations for your overseeing magician. There aren't a ton of options, but just enough to figure out a few cool combinations. 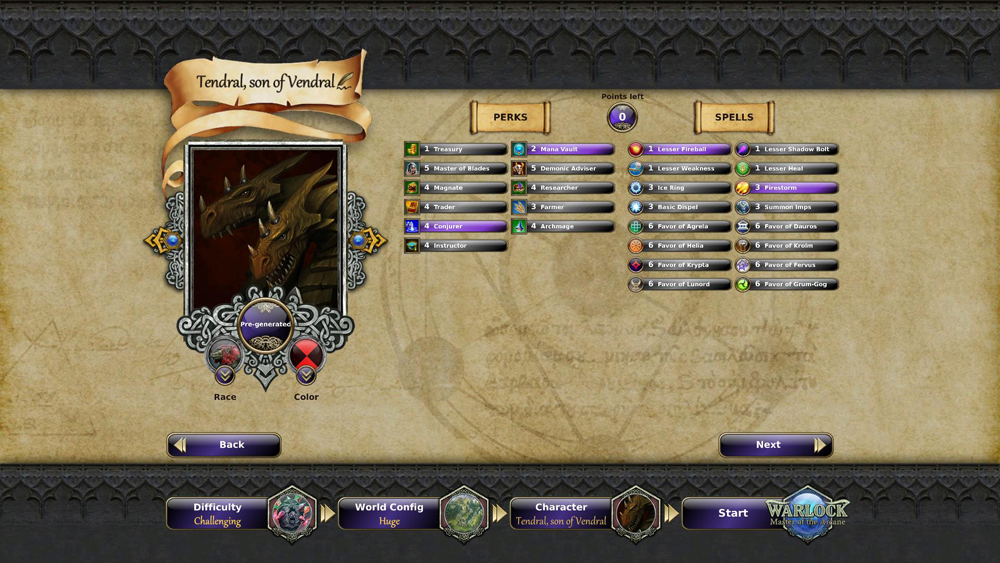 Truth be told, the game's setting initially left me feeling bored and uninterested -- it's set in Ardania, again, the land of many previous game reviews. Ugh. More power to the Connery-esque voice actor -- really, he's not that bad (and he's probably loaded) -- but there's only so much of him and Ardania that a gamer can take before wanting to pour a kettle of boiling water into his ears. Ardania feels lazy and unimaginative; Paradox needed a generic fantasy setting, so they made one -- but now it's gone overboard. The games don't feel connected in any way, and yet they're all happening in the same place. Does this have any impact on Warlock? Not gameplay-wise, though I have begun to feel physically ill when playing games in the Land of Ardania. Don't get me wrong - Majesty is a great game, but really, we don't need this many spin-offs.

Please create a new setting, Paradox. That's all I ask. Just give it a new name and tell Connery to imitate Morgan Freeman instead, I'd be cool with that. Even if he has a Scottish accent.

Warlock's an OK game overall. Its usability is lacking the maturity that Heroes, Total War, Civilization, and Disciples all have, but hopefully we'll see it expand with experience. The game's fun, which is really all that matters, but it's not the most fun you could have in this genre, methinks. If you're sick and tired of Heroes, can't stand the age of Disciples II, and feel like Civilization or Total War are a bit too complex for you, then Warlock is great. I would strongly suggest you look into Heroes, Disciples, and Warlock gameplay videos and decide which is best for your money.

Warlock is the right price, though, so that's always a plus. Unlike certain games that pretend they're much bigger than life... cough.