Victoriously returning from the magnetic grasp of skepticism, Tron: Evolution races toward market-wide acceptance. Initial impressions were less than amazing, and unfortunate events magnified the uncertainty of this writer immeasurably; however, my recent interview with Darren Hedges, a Director at Propaganda Games, revealed the many hidden intricacies of Tron. Although I still reserve a healthy hesitation with any franchise- or movie-based game, especially given Disney's history of sub-par titles, the future of Tron is somehow different, we explore exactly why below.

Nearly thirty years after the dorky, sub-culture debut of Tron, Flynn returns with his crew to the big screen and gaming platforms near you. The hands-on demo at PAX Prime this year proved chaotic and unorganized, but nonetheless entertaining. By the way, our favorite PAX titles can be found here!

The line extending from Disney's booth coiled within itself, easily a one hour wait for half the play time. Towering "TRON" letters flanked either side of the booth, glowing ominously from the blue-white backlighting; a slick lightcycle (below) remained the subjects of photography all weekend, and even the game controllers had special Tron lettering. Disney ranks as a world-leader in entertainment and presentation - they spend lots of money and spruce up the exterior, and hopefully do not neglect the content within. Notorious for games that are either too hard, too repetitive, or just lame, the publisher already had its back up against the shiny, glowing Tron wall.

Seattle's Convention Center doubled as the coliseum of gaming (and cosplay) at PAX this weekend. Hundreds of developers were akin to gladiators, battling in a full scale bloodbath (without the bath, it was pretty stinky by day three) for consumer attention. Under the weight of the Medal of Honor, Duke Nukem Forever, Portal 2, and Dragon Age 2 booths, the lesser hyped contenders did their best to lasso attention. 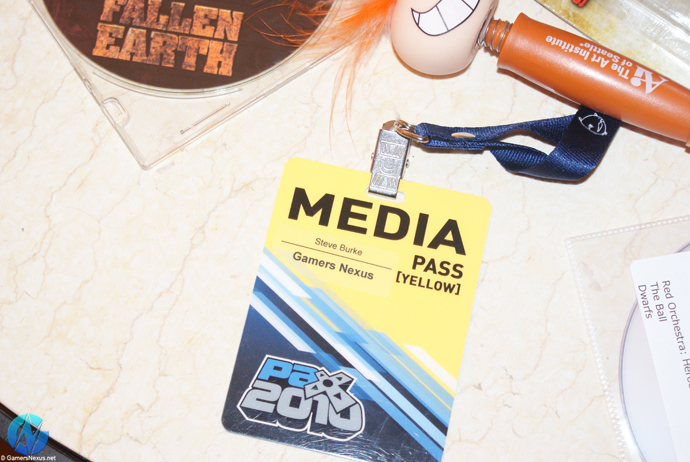 In the beforetimes, stadiums were divided into stables of slaves and trained warriors - PAX followed this example, and like Rome, occasionally an underdog rose above even the most funded combatants. Three days of hands-on experience at PAX Prime have exposed the biggest flaws and accentuated the nuances of even the smallest developers. Aside from the big-namers we've all heard of, what were the most worthy titles of PAX '10? Find out more about Hoard, Nexuiz, Darkspore, End of Nations, and Torchlight 2 below!

Note: each of the below may be featured in larger previews soon, so stay tuned!

Commander: Conquest of the Americas brings fun, easy, and invigorating naval battles to the forefront of strategy gaming... wait, that sounds familiar. For those that remember the clunky and overcomplicated navies of Empire: Total War, Commander sails past its strategic counterpart as the more exciting, less glitchy victor.

Grandiose expos like E3 publicize American gaming culture to the world, but what is it like to be a gamer in other countries – like Pakistan? Every year I am tempted to attend E3 when it broadcasts live. The expo is a gaming symbol to the world, and thanks to events like E3, we all know what it is like to game in the US and Europe. Have you ever wondered if gaming elsewhere would be any different?

"I have a constant fear that something's always near." -Iron Maiden

Whether you’re trapped in a dark elevator shaft, cornered near an air duct, or just plain surrounded by zombies, only a handful of game designers have stimulated that dark-fearing, claustrophobic child within all of us. Scaring your audience is one of the hardest things to do as a designer – gamers are a giddy bunch: constantly giggling at twitching corpse glitches and missing limbs, the task itself is a scarier prospect than the execution. The games that truly frighten us don’t need the fanciest graphics, but that doesn’t make it any easier to accomplish.

It's a phrase I picked up while working as a test technician at a large computing company, but was most often spoken with sarcastic undertones. A phrase coined with the intent of mocking heedless higher-ups exhibiting a careless disregard for bugs found during the test cycle. Unfortunately, the same words can be applied to any gaming company – but most often the larger, corporate types: “ship it!”

EA unceasingly flaunts defective titles as a prime example of what not to do, expressly with the company's recent manifestation of a 'ship it now, fix it later' mentality. If a particular game design concept is in vogue, provided that clever marketing reinforces it, hype will naturally ascend to a point where the gaming populace wants it now. Just as no rock star would deny an audience his presence, no large publishing conglomerate would withhold a game of such desire. There are exclusions to this statement – most prominently Blizzard, known for their tongue-in-cheek “it'll be done when it's done” release dates, but not everyone is so immune to the entrancing allure of money (usually in the form of millions). This post will examine the reasoning behind far-too-early releases, and more importantly, how you can protect yourself from becoming the owner of a shiny $50 coaster.

GG: The Formula of Hype