The past few weeks have seen the publication of content set on exploring the manufacturing process of RAM, SSDs, & motherboards and the silicon failure analysis process at nVidia; while visiting the local hardware vendors, we took a trip up to Santa Monica to visit Cloud Imperium Games -- home to the upcoming space-sim, Star Citizen.

We've previously written about Star Citizen in great depth in our technology analysis interview and PAX East interview. If you're still not familiar with the game, here's an overview from the Kickstarter campaign:

Star Citizen brings the visceral action of piloting interstellar craft through combat and exploration to a new generation of gamers at a level of fidelity never before seen. At its core Star Citizen is a destination, not a one-off story. It's a complete universe where any number of adventures can take place, allowing players to decide their own game experience. Pick up jobs as a smuggler, pirate, merchant, bounty hunter, or enlist as a pilot, protecting the borders from outside threats. Chris Roberts has always wanted to create one cohesive universe that encompasses everything that made Wing Commander and Privateer / Freelancer special. A huge sandbox with a complex and deep lore allowing players to explore or play in whatever capacity they wish. That universe is Star Citizen.

After accumulating questions from the community, we visited Chris Roberts and team to discuss gameplay mechanics, hardware, hurdles, and game development methodology. The interview went long, so we've split the content into two videos: The first is an edited cut of the most pertinent questions (includes in-engine footage of the hangar module), the second is the full, minimally-edited interview -- ideal for fanatics.

In talking with Roberts, I think you'll find his vision for multiplayer combat tactics most interesting (discussed briefly @ 30:28): By mixing ballistic and energy weaponry, player squadrons will be able to efficiently tear-down opposing ships. Ballistic weapons can be used to pierce the hull and eliminate core components, energy weapons optimized for damaging shields will open the target up to those ballistic projectiles. Because projectiles and externally-mounted hardware are limited in ammunition -- and because energy weapons need recharging -- round conservation and tactical weapons deployment plays a big role in combat. 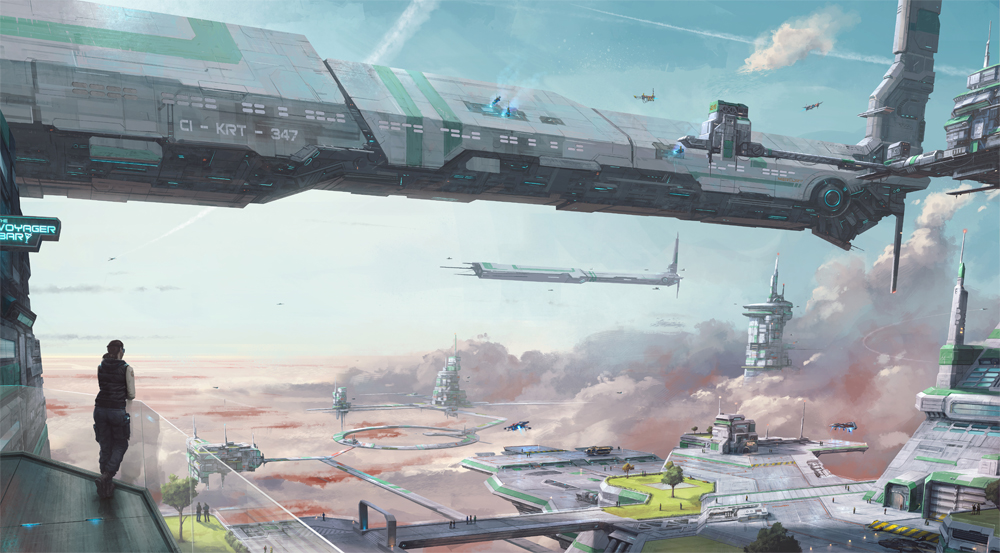 Perhaps yet more interesting for our hardware enthusiasts is Star Citizen's ship hardware customization system. Each individual component on the ship is represented by a physical item on the spacecraft: life support is an actual, physical system; the engine requires heatpiping for thermal dissipation (just as a copper coldplate functions on a CPU block) and power piping for energy distribution; the shield generator is an on-craft item, and so on. Roberts describes the hardware load-outs as being akin to system building:

"You should almost think of the ship itself being like a case in the PC world. You decide what brains you're putting in it, what CPU you're putting in it -- all those things are basically what you can customize, and that's one of the reasons I think the game's going to be interesting. You could have two players with the same ship and they could have kitted-out their ships with totally different builds. Part of combat - when you're going up against people - will be knowing how they set up their ship; like if they set up their ship for stealth, and if so you need to change-out your package for that. If they have a really stealthy ship, it's harder to get radar locks for weapons and the rest the stuff -- so maybe you need to have more scanners, but more scanners means you can't have as many weapons or as much power. The balancing's going to be a challenge, but it's really cool."

Because Star Citizen is a skill-based game, shield-penetrating projectiles (energy or otherwise) are physically traced through the ship's hull and damage is applied to collision locations. Where most flight-combat games roll dice to determine the damage outcome for individual components, Star Citizen actually tracks individual rounds through their impact point.

"Each one of those systems has a physical component that gets put in the ship. If you're shooting a ship, it's not like we just roll [a die] and [see] which system gets hit -- it's literally: Our bolt goes through, and we've knocked the shields down and we're going through the hull, we trace that through the actual ship and -- Does it hit the life support? Does it hit the power plant? And if it hits it, it does damage to it; and if it does damage to it, it [impacts other systems]."

On larger ships, once ship-boarding combat is introduced, Roberts' vision includes the ability for intruders to sabotage individual components (see: Battlefront 2). A pirate's ship load-out might include a hull drill, for instance, allowing that player access through a ship's hull should she successfully land on the target vessel.

As for what the team's working on more immediately, that'd be the Hangar Module and impending dog-fighting module. The hangar module can be expected on August 24th (GamesCom launch) and will mark the first publicly-available executable for Star Citizen. Different hangars are available depending on backer level, ranging in luxury and space. The dog-fighting module is targeted for a Q4 launch (end of December* [corrected] was suggested). An update on the Hornet can be expected prior to the hangar module's launch.

The first rev of the hangar module will feature theAurora, 300i, Hornet, Freelancer, and Constellation (the initial pledge ships), but more will be added in iterative steps post-launch.

A Look at Asset Assignment - The Ship Production Timeline

In terms of hours invested, the total cost of a single ship for Star Citizen is staggeringly high -- though given the fidelity of the production, fittingly so. A single ship goes through several stages of production: Concept (art, design), 3D modeling, texturing, rigging, animation, programming the individual objects or other unique features, and so on. Roberts describes the process as taking several months:

"A simple ship like a fighter or an Aurora - after the concept part is done - [takes] 2-3 months. So in the concept part, we design it out and model it in 3D - that itself can take 6-8 weeks. After that, when we bring it into the engine, we've got to clean up the model, texture it, break it apart into sub-objects, rig it, animate it, and bring it into the engine. So that can take anywhere -- from very beginning to very end -- I think the shortest we can do is something like 3 months, and much more like 6 months or so on the bigger projects, on one ship."

The team presently has somewhere around 24 artists working on the project. As with all games, the artists focus on different disciplines -- there are high-poly modelers, environment artists (planet-side, ship interiors), concept artists, animators, and character artists. By the time a ship is complete, at least 6-7 people have had their hands on it at some point in the process.

While not immediately related to the game itself, the office of any game studio often reflects the personality of its inhabitants. CIG is in the process of ramping up its three primary locations: An Austin office,Montrealoffice, and the Santa Monica headquarters.

Walking through the doors of the loft-like HQ, we were greeted by collections from Roberts' past: model Wing Commander ships, toys, movie posters, golden floppy disks, a chromed Kilrathi statuette, a Galaga machine, and even a ship-like, metal-paneled table. It's impossible to feel anything but comfortable in Star Citizen's development home.

As we've toured more game studios over the years, it's become clear that those dedicated to creating a comfortable atmosphere harbor creativity, drive, and are generally more successful. The games industry has an abnormally high burn-out rate among developers (a problem of compensation and fatiguing crunch times), but using less abusive development methodologies / SDLCs increases the retention rate significantly.

Chris Roberts - as noted in the videos - believes in making shorter, calculated jaunts toward the finish line, rather than sprinting all-out toward the end (see: AGILE/SCRUM). The idea here is that there's still "crunch time," but it's in spread-out intervals that are more survivable: "I'm not saying our method will inherently make us brilliant and everyone else dumb, but [...] instead of having one crazy crunch at the end, it's sort of smaller sprints where there's little crunches, but you're in better shape towards the end."

And because we can't help but identify all the components in any nearby computer, here's the specs load-out of Chris' main development rig:

Of all the components, Roberts noted he was particularly satisfied with Corsair's C70 enclosure, which presently houses most of the team's development rigs. The C70 is also our case of choice in the $100-$120 range.

You can find Star Citizen's official website here, where fundraising has reached nearly $16 million; Roberts has defined an ideal objective as roughly $21 million, which would allow the team freedom from private funding sources and more flexibility going forward.

As for where you can find the Star Citizen team next, Roberts will be on two panels at PAX Prime (schedule here). A more immediate presence is GamesCom in Koeln, 8/21-8/25.