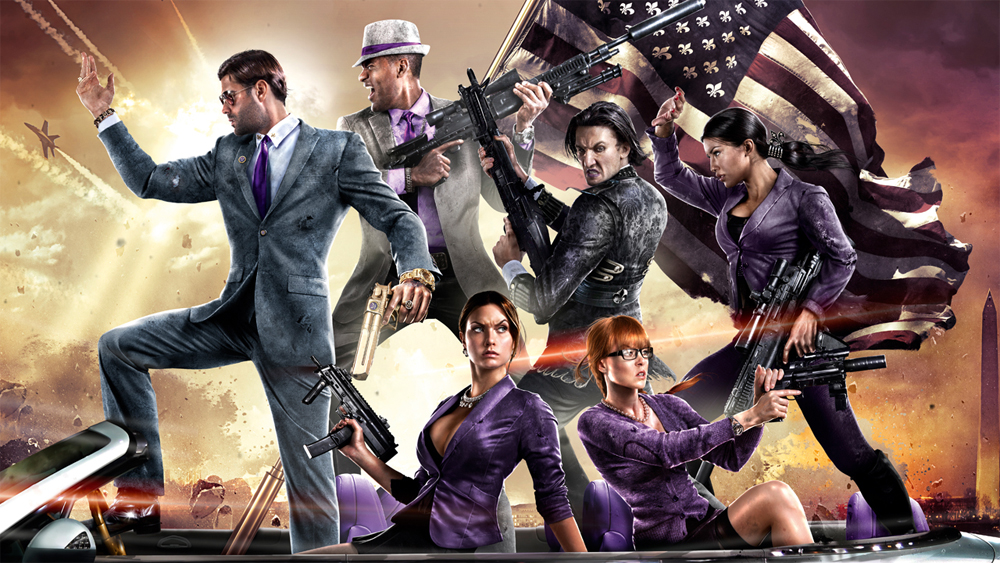 THQ subsidiary Volition has gained global recognition for its development of the Saints Row titles, easily the most purely ridiculous games on the market. In a good way. In a discussion panel at The Escapist Expo this weekend, Volition Creative Director Steve Jaros gave insight to the studio's game design process, the distinction and initial competition between GTA and Saints Row, and the studio's bankruptcy and subsequent purchase.

Jaros' topics included: Volition's sources for inspiration, their shock when GTA's first foray into gang-related storylines was announced, writing lines for voice actors, hiring celebrities for in-game personalities, and beloved game design concepts that never shipped. Even if you're not a big Saints Row fan, it's worth watching the first 10 minutes if only to learn about the studio's philosophy and the industry's interactions.

When going into depth on the design of Saints Row 4 and the studio's internal development philosophy, Jaros quoted an interview given by Principal Designer Scott Phillips: "The DNA of Volition is 'fun.'" The studio makes great efforts to frequently gather staff for team-building events, parties, and other creativity-enabling endeavors. For instance, throughout Volition's development process, the studio grants opportunities for its designers & developers to "make whatever you want." A few studios do this (Bethesda comes to mind), the idea being that allowing pure, unfiltered creativity can yield some of the project's most ridiculous or fun mechanics and interactions. This is how horse-mounted combat came to be in Skyrim.

The Dubstep Gun was a result of one of these weeks, where two teams simultaneously and independently decided to create the weapon. When each team realized what the other was doing, they worked together, combined assets, and the rest is history.

Even down to the team's voice actor scripting, the studio's approach to building an internal community shows through: Jaros noted that once he learns a voice actor's personality, inflections, and speech patterns, he'll rewrite entire lines for their character to better match that actor's personality.

At the end of the day, what Saints Row (and Volition) comes down to is the ability to be who you want, do what you want, and still be respected. This is Jaros' favorite individual element of the game: The fact that the player character can be a male, female, fat, skinny, dress extravagantly, and everyone in the game still respects that character. There's no judgment from the other Saints -- you're where the buck stops.

This approach is emphasized by the removal of "respect points" from Saints Row 1. In the original game, players would accumulate respect points based upon specific clothing items, which slightly railroaded character customization because players would optimize for the most points.

Jaros urged that the objective of Saints Row is to celebrate the players and their unique style choices, not to mechanically restrict individuality:

"Back in Saints Row 1 we used to give respect bonuses based on clothing items. In Saints Row 2, we were like, 'no, we don't want to do that anymore.' And the reason why is because who the fuck are we to tell people that you can gain more respect for wearing a certain piece of clothes. That's like the shittiest thing ever. You [should be able to] celebrate the thing you like; it's not about us, it's about you guys."

As fantastically as this design approach has worked for Volition, THQ had its own problems and inevitably collapsed under its own weight.

One of the industry's longest-lasting and more powerful developer/publisher combos was THQ, which folded to bankruptcy in 2012. After several troubled game launches (Homefront, Red Faction) and a net loss of $240 million for the 2011-2012 fiscal year, THQ was forced to close its doors and auction assets (including Volition) to potential buyers.

Volition's staff was informed of the declaration of bankruptcy just before their Christmas holiday break; New Year's Day saw the auctioning of the company, where company directors gathered immediately after break to determine the fate of Volition and the yet-unreleased Saints Row 4. Volition showed its impending title to buyers, explained that Saints Row 4 only had -- at that time -- about 6 months of development left, and hoped for the best.

Initially, Volition's directors didn't think the transaction would go through with Deep Silver -- only the company's CEO showed up at auction, where he was in-and-out within an hour. Certainly not the pinnacle of enthusiasm.

"Here's the thing: Bankruptcy's fuckin' scary. At the end of the day, making a game when bankruptcy is happening is terrifying."

Another (unnamed) publisher also expressed interest in the studio acquisition, but was concerned with Saints Row 4 and its implementation of super powers (building on the ridiculousness of the game, your gangster can gain traditional super powers). The unnamed publisher suggested the cancelation of Saints Row 4 as a result of this (23:00 in the video), but luckily for fans of the series, Deep Silver stepped in and finalized its own acquisition. To illustrate the dichotomy between the two publishing houses, Jaros noted that Deep Silver's team loved the idea of Saints with super powers, and only had to see the game to confirm their already-existing desire to acquire the studio.

At the point of acquisition (January), Saints Row 4 had approximately six more months of development prior to launch, where it was submitted in June of 2013.

The Future of Saints Row and Volition

Things are looking up for the studio. Saints Row 4 released to critical acclaim across the board, averaging an 88% score on Metacritic. The game shipped more than one million units during its launch week.

As for the future, well, we weren't given many hints in the panel. There's incoming DLC for Saints Row 4 (and will be more if interest is expressed), and that certainly sounds promising, but there wasn't much confirmation/denying of a Saints Row 5. Deep Silver's Aubrey Norris responded to a GameZone inquiry about SR5 with "No habla, I don't speak English anymore!" and Jaros focused on his panel's discussion topic, which was strictly Saints Row 4.

For other content relating to The Escapist Expo, check out our cosplay gallery or hit the front page a bit later for our "Rise of Streaming" panel coverage.