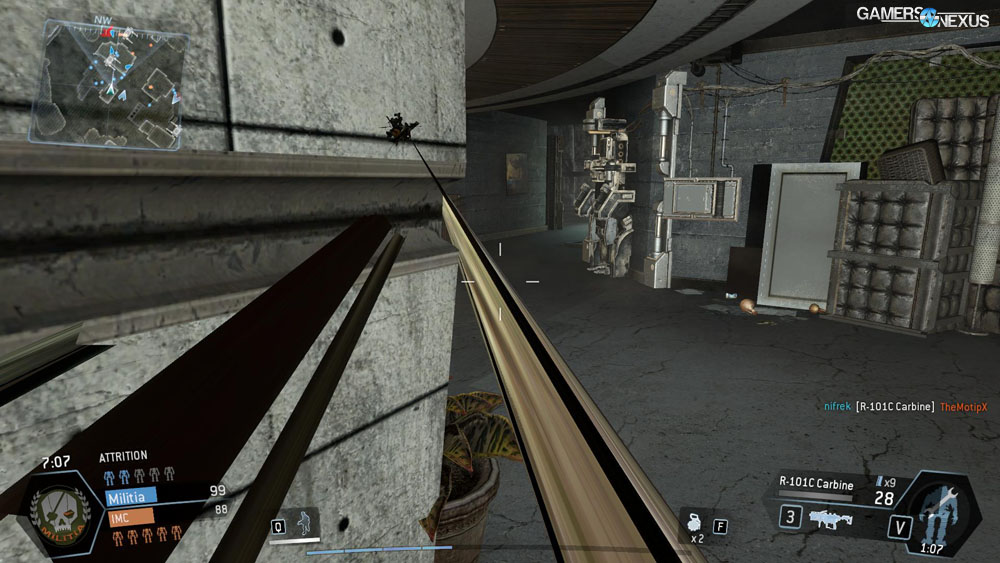 The one I'd like to address immediately is the concern that Titanfall is "locked at 60FPS" or a "fixed" framerate. As I published in our benchmark article, it is actually locked to the frequency of the host display device -- if you've got a 60Hz display, the game will not exceed 60FPS. We wrote this earlier:

"Titanfall appears to lock the FPS at the monitor's refresh rate (60Hz = 60FPS locked framerate; 120Hz = 120FPS locked framerate, etc.). Ensure your display device is set to its optimal response frequency and ensure V-Sync is configured properly. You can learn about V-Sync in our previous post, found here; you'll want it to either be disabled or, if you're using a 120Hz display, triple-buffered."

During our benchmarking process, we used a 120Hz display to eliminate report throttling on the higher-end GPU configurations. This allowed us to exceed the previously-assumed 60FPS "cap," and is what led us to realize that the framerate is in fact locked to the frequency. In attempting to circumvent the FPS cap, we tried a few hacks to the game's config files:

Anyway, if you're running a 120Hz, 144Hz, 240Hz, or similar non-standard frequency monitor, make sure it's actually operating at the setting (through Windows) and then play with your V-Sync settings to output the framerate you desire. You'll probably want Trilinear Buffering, though this has caused issues for others players.

One user found that nVidia device owners can disable V-Sync in the nVidia Control Panel and enable it in Titanfall in order to fully unlock the framerate without V-Sync enabled. Unfortunately, doing this revealed that the game's input device (mouse) is tied to the framerate -- the more sporadic your changes in FPS, the more sporadic your mouse movement. If you experience mouse lag, input lag, mouse sensitivity randomly changing, "mouse acceleration," or other similar issues, you may want to make sure you've got your nVidia settings consistent with your in-game settings.

The same user (db_mew) suggests the following solution: "Source engine already has raw mouse input, they just have to enable it in Titanfall."

As a sort of slap to the face, I found that using a controller removed many of the input lag/stutter issues. Now if I could just aim with a controller... either way, it may be a temporary solution for some of you.

Titanfall exhibits severe horizontal frame desynchronization with V-Sync enabled. Some users online have taken to calling this "input lag" or "mouse lag," but it is ultimately an issue related to V-Sync settings. Disabling V-Sync entirely fixes a lot of these, though in our testing, we still experienced fairly jarring frame desynchronization on all tested video cards. Ensure your GPU control panel has the appropriate settings matching those of Titanfall's.

UPDATE: I discovered that decreasing texture resolution from 'insane' to 'high' reduced much of the stuttering/tearing/flicker issues to almost zero. I'd strongly suggest trying this. 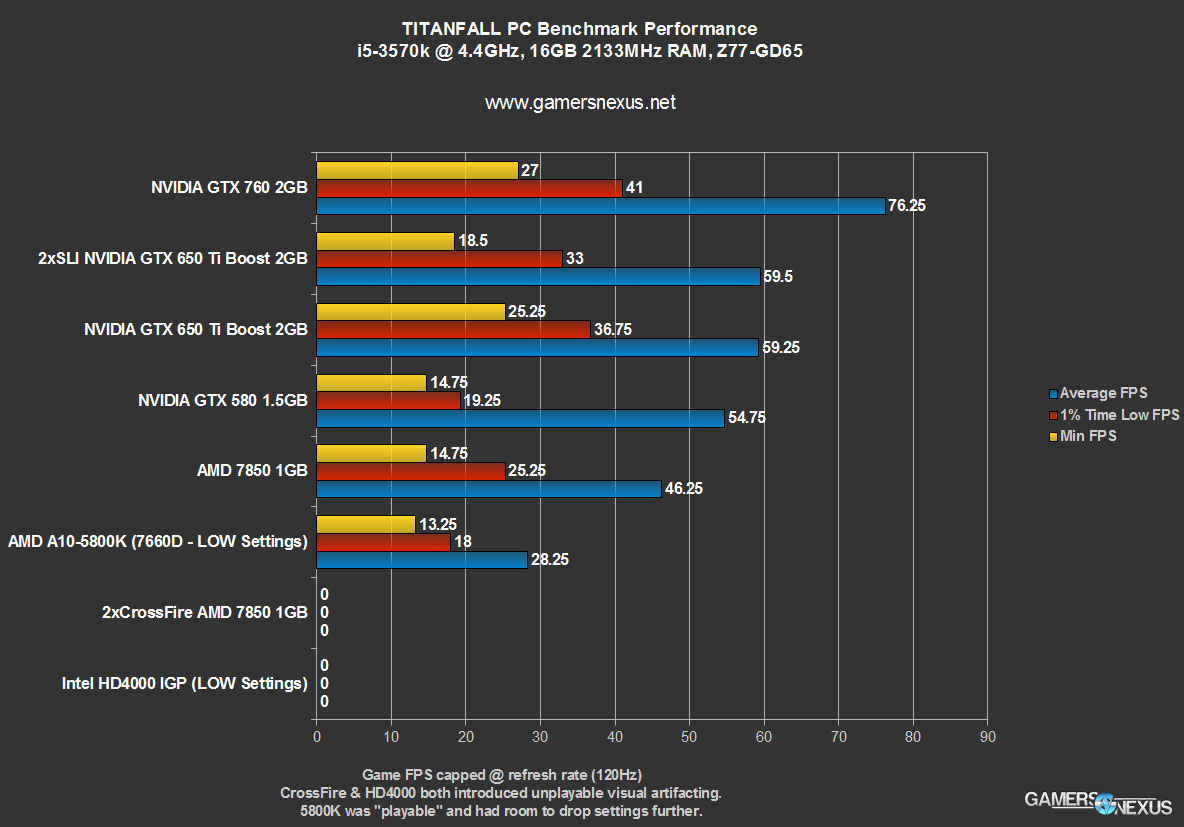 Our benchmark of Titanfall showed that our SLI configuration underperformed the single-card configuration in some instances, and was within margin of error for others. We also found that CrossFire caused extreme screen flickering (multiple colors flickering at a high speed), texture tearing, and mesh/object alignment issues.

SLI exhibited microstuttering (choppy movement, frame output) with our 2x650 Ti Boost setup. The game would be largely unplayable in the face of this. It is unlikely that this will be fixed until SLI profiles are released.

To 'resolve' these issues, it is strongly encouraged that you disable CrossFire or SLI for the time being.

If you're getting stuttering and don't have a multi-GPU setup, disabling V-Sync altogether will resolve the issue but result in a locked framerate (likely at 60FPS, regardless of your monitor's response frequency).

When testing the game on the Intel HD4000 IGP (Ivy Bridge i5-3570K 3rd-Gen CPU), the game experienced sporadic black screen issues (screen goes black at startup/launch, flickering), CTDs (crash-to-desktop), event errors, and in-game texture tearing, flickering, and model distortion. Unfortunately, we were unable to find a resolution at this time beyond simply plugging in a discrete GPU, which isn't always possible. The game launched most of the time, but had a few "Not Responding" crashes and often went black at startup. When we were able to actually get into a game, the graphics looked like the slider image at the top of the article (here's another for reference): 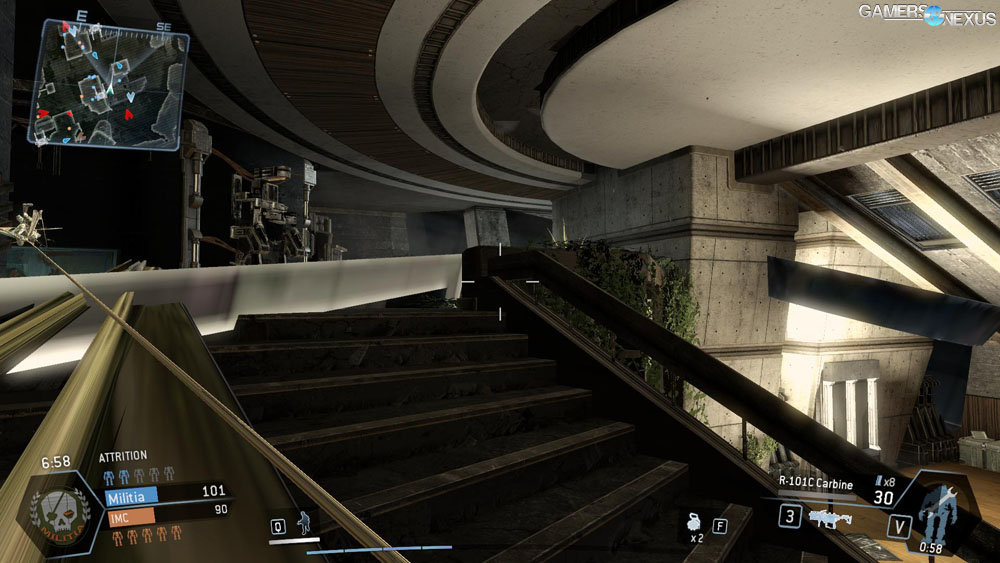 The graphics were overall "glitchy" and visually artifacting with the HD4000.

This is a quick one. In order to change the texture resolution in Titanfall, you need to be on the original settings screen (prior to clicking "Play"), then go to options, then change the setting freely. If you've entered the game client officially by hitting 'play,' you won't be able to change this item.

The game notes that =>3GB video RAM is required for the 'insane' resolution textures, and maybe it is in the final version of the game, but we have yet to see evidence of that. We used all 2GB and 1GB video cards and were able to configure 'insane' resolutions without saturating the frame buffer (the exception being the 1GB HD 7850, which sometimes would be saturated).

As a note, I found that the game tended to use between 1.7GB and 3.5GB of system RAM, depending on settings and map/player count.

This covers several of the same topics above, but just to reiterate:

Several of the CTD/crashing and black screen issues we experienced were circumvented by disabling CrossFire or SLI. We also found that playing the game in Windowed Mode (rather than full-screen) resolved our issues with minimizing causing the game to crash. It is generally recommended not to minimize while load screens are active.

Intel's HD4000 exhibited black screens and crashes no matter what - the only solution we found was to use a discrete GPU.

This one's really easy. We used this while benchmarking due to the sheer number of game restarts required (swapping video cards) and have found it to save some time. To remove the intro/startup movies for Titanfall, do the following:

You can also use this to run borderless windowed mode (-noborder).

Now that the beta is available to the public, gamers have flooded the servers and are having trouble getting into games - resulting in this message: "No servers found." Unfortunately, there's nothing you can do to fix this other than keep trying. It is a known issue between Respawn and Microsoft's server platform; Respawn has acknowledged it publicly and is working to fix it ASAP. In the meantime, sit tight.

If you know of more issues that we've missed (or if you have a solution), please post it below so others who find this article can attempt to resolve their issues!