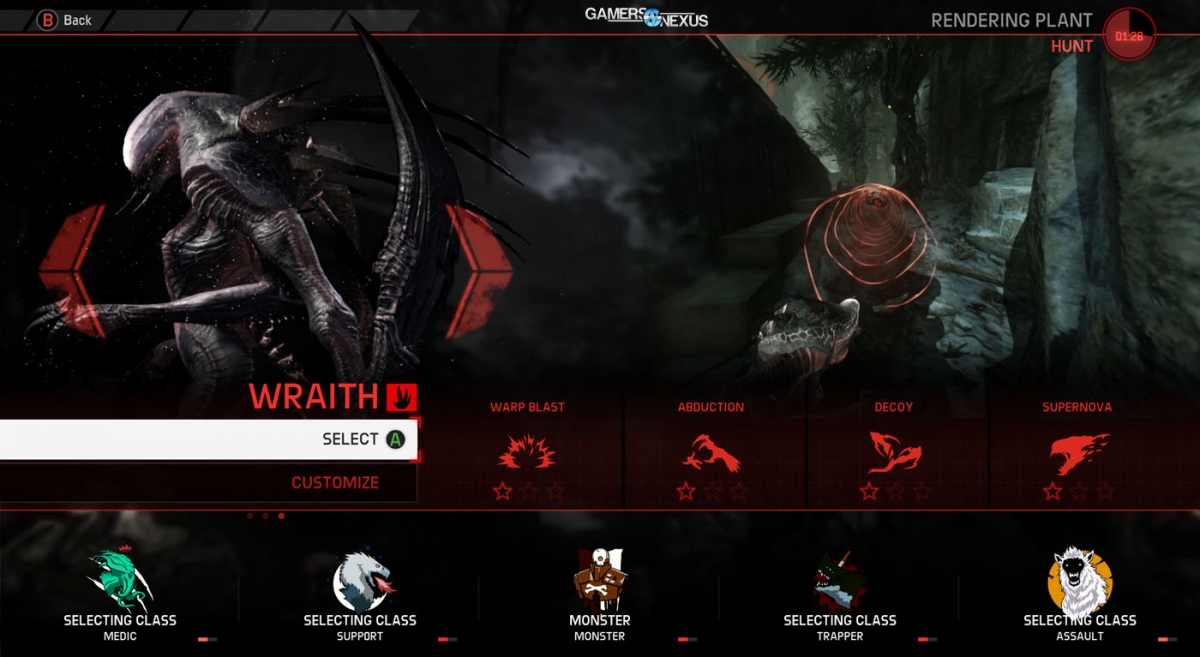 Evolve is a 1v4 asymmetrical first-person shooter/action game from Turtle Rock Studios. On one side are four Hunters, each playing a different role: Assault, Support, Medic, and Trapper. The player experiences the Hunter in first-person and has access to a variety of weapons and abilities for each Hunter. On the other side is a Monster, a powerful creature that the player controls from a third-person perspective. The Monster has a set of abilities that the player executes similar to a Left 4 Dead (or any MOBA / MMO on the market).

Evolve offers several PVP modes, including Hunt, Nest, and Rescue. The game also features a single-player experience that can be played PVP or cooperatively, now called Evacuation; we talk more about this mode below.

Evolve’s release date stands as February 10 on PC, Xbox One, and Playstation 4. PC requirements have not been announced.

Evacuation is an amalgamation of each of Evolve’s multiplayer modes: Hunt, Defend, Nest, and Rescue. The objective is to save (Hunters) or destroy (Monster) more survivors than the opposition. Hunters and the Monster compete across a variety of game modes that take place on different maps, so that the Evacuation experience is different every time. 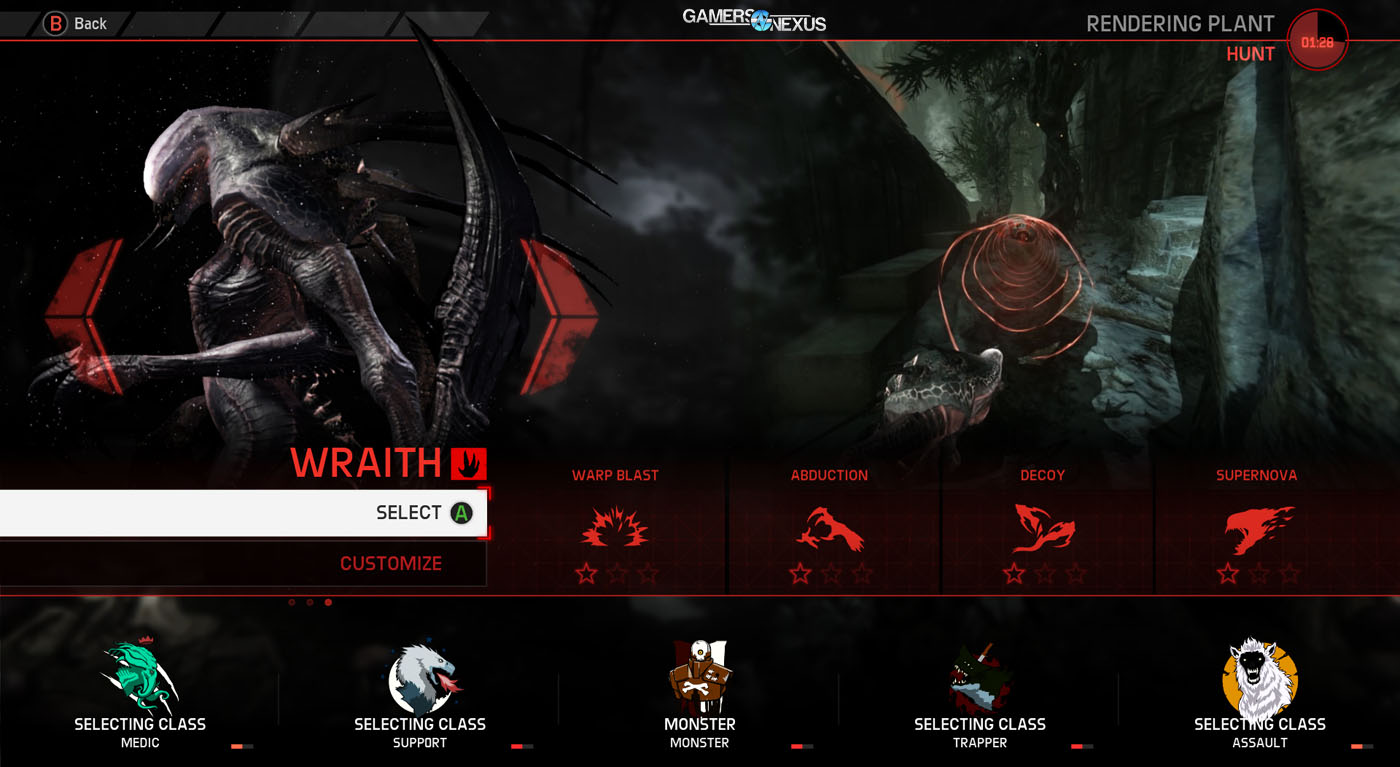 Joining the Goliath and Kraken upon Evolve’s release is Wraith, an “assassin” Monster that moves quickly and kills quietly -- well, at least for a monster. Wraith does not have as much health as Goliath and Kraken but moves faster, encouraging players to execute timely attacks and remain on-the-move.

She has four abilities that not only round-out her assassin profile, but also vary how a player can gradually take-down the opposing Hunters.

Evolve will enter an open beta over Xbox Live for Gold users from January 15 to January 19. Players can try out Evacuation starting January 17. Any Hunter or Monster (Wraith) that the player unlocks during Evacuation will carry over into the game’s launch.

Outside of Evacuation, the beta will feature Hunt (objective is to kill the opposition), the Monsters Goliath and Kraken, and eight of the 12 Hunters. All 12 of the maps available at launch will be part of the beta, too.

Turtle Rock will offer a closed testing period for PC gamers starting January 16. Those who were invited to October’s Big Alpha or who own either Bioshock Infinite or Left 4 Dead will be able to access the testing. The features for this test will be fewer than the XBL open beta.

Playstation 4 users who were also invited to the Big Alpha can participate in a PS4 test beginning January 17; a Playstation Plus account is required.

Offline play will not be supported. 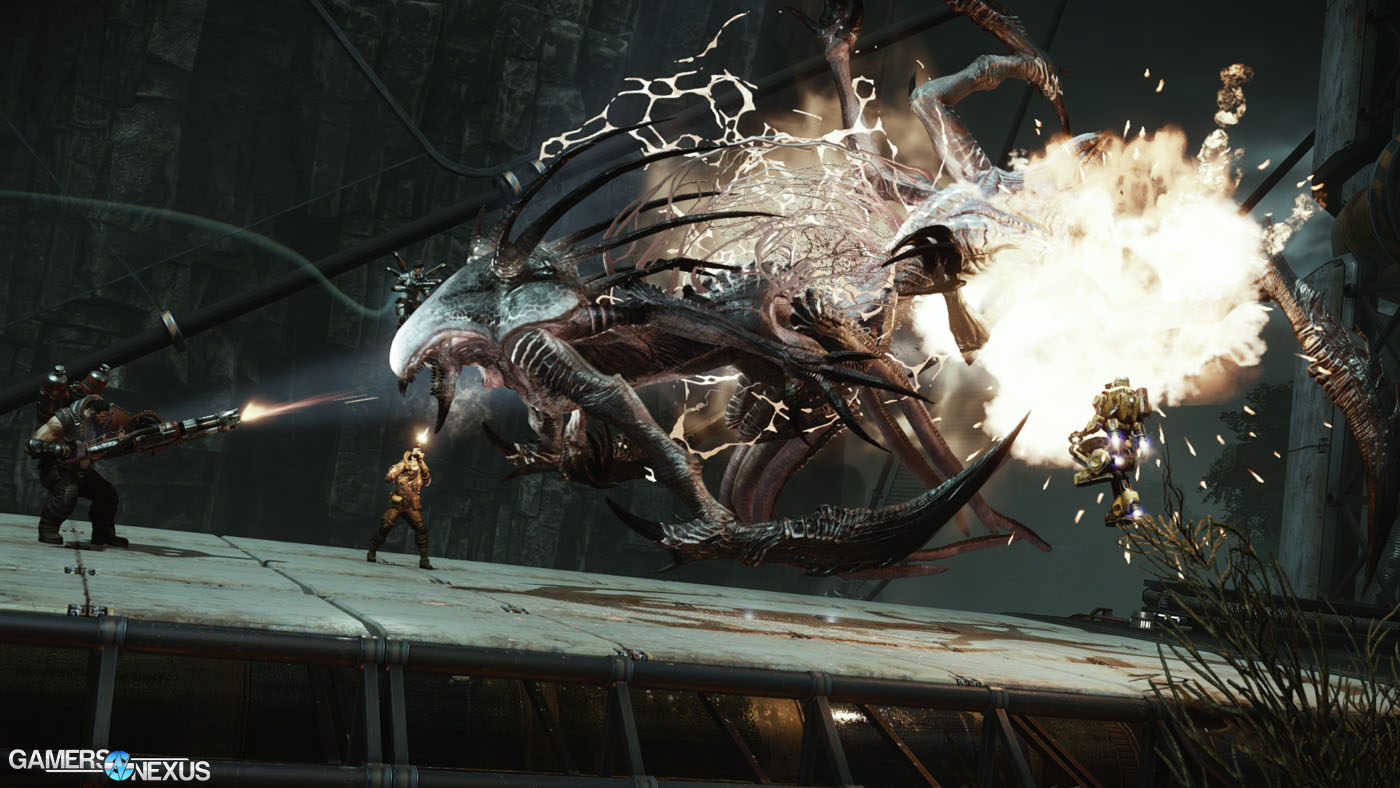 I had a chance to play Evolve’s Evacuation mode and learn more about the specializations of the Hunters and the new monster Wraith.

Evacuation is mostly a series of all game modes tied into one, but there are bonuses that carry over from each round. I liked how I could choose what game mode I wanted to play next (it’s not a repeat of the previous game mode) and how I could customize my Monster’s ability after every round. For example, I could max-out her Abduction for Nest, or I could balance her out for a Hunt.

Evolve has a challenging AI, and there’s only one difficulty mode. Playing as Goliath for the first Monster experience will be beneficial, as his high HP is more forgiving when taking on multiple tasks & taking damage at the same time. Wraith offers some fun ways to be an assassin without remaining completely hidden, but with a low HP and surprisingly low stamina (mine was often exploited by Hunters in battle), she will take getting used to.

My time as a Hunter was brief, but I appreciated how little firing I had to do to succeed. Each class utilizes its entire arsenal of abilities so that the player is always doing something different. For example, as a Support Hunter, I’m concerned with detecting the Monster when we can’t see it. When I’m at a distance, I want to attack with my guided rock launcher, but when I’m closer, I might be more useful buffing my Assault Hunter (and then getting the heck out with my jetpack). I’ve learned that Evolve plays less as an FPS to the Hunter and more like a first-person action game with quick decision-making. It’s refreshing when compared to other PVP FPS games out there.

Got any questions for Turtle Rock? Feel free to shoot them by us by typing a comment below.