Space games are everywhere. The industry goes through waves of genre- or setting-specific infatuation, and this era of gaming seems to be obsessive about space sims and spaceship battles. The looming monolith is Star Citizen, as we all know, but there's also the recently-released Elite: Dangerous, indie newcomers Rebel Galaxy and Voidspace, and non-sim games like Dreadnought.

Space sims are notoriously learning- and time-intensive, making them somewhat inaccessible to gamers who seek nothing more than space-flight combat and the obliteration of massive capital ships. That's where games like Dreadnought come into play, developed by Yager and housed under Greybox alongside Grey Goo.

To this end, Dreadnought plays akin to a Battlefield game in structure. Players build their loadouts pre-match, drop-in, select one of five classes, and then engage in combat. Teamwork is key to success in Dreadnought, encouraged by offering five core classes that each offer a host of strengths (and weaknesses) to gameplay.

Dreadnought will be released as a free-to-play title, developed by many of the same team that built Spec Ops: The Line (which had a deeply impacting campaign parallel to Heart of Darkness). We've been assured that the game won't allow “pay-to-win” options that create an unfair atmosphere, but were also told that monetization plans are not yet final. We can be sure that ship skins will be an option, though. 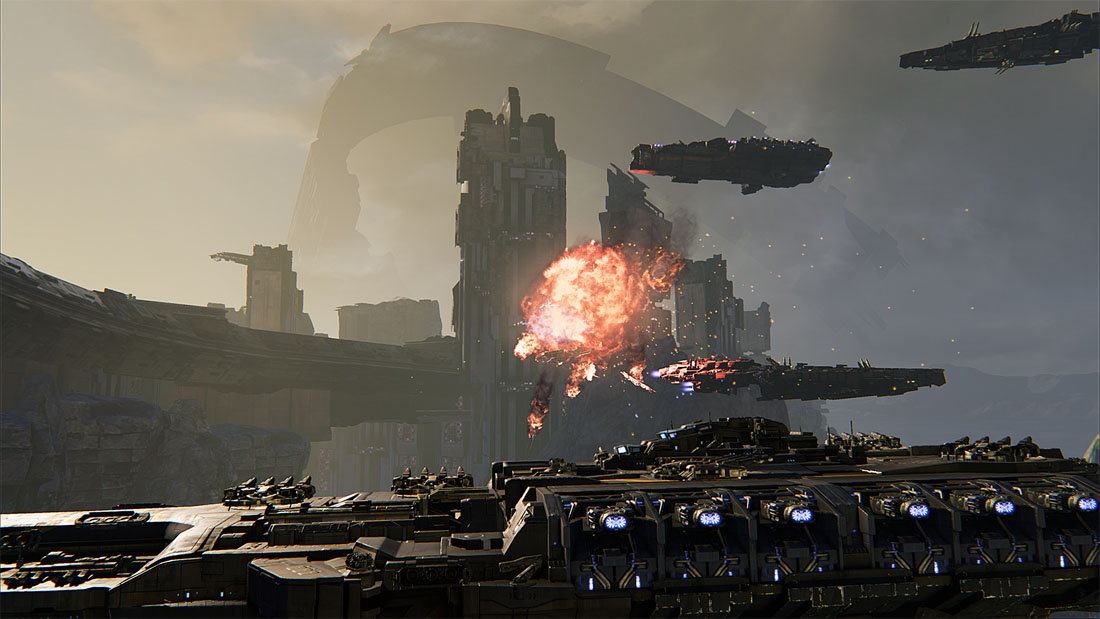 We've played a few matches of Dreadnought at various tradeshows now. As generally competitive gamers with FPS and RTS backgrounds, Dreadnought appealed to our favored class of games with its quick-to-learn, hard-to-master archetype.

The game's layout is straight-forward. Players choose a game mode prior to the match (we've only played one mode as it stands now – effectively a TDM), customize their five class loadouts with unlockables earned through persistent progression (Battlefield-esque ranks), and then hop into the game. Once in the game, players select a class, spawn, and commit to battle. Upon destruction, players choose their class and respawn.

From here, players can choose a specific ship for the class. Ships are earned in a similar fashion to gun unlocks in Battlefield, granted through experience as players rack-up kills. Although yet unspecified, different ships will grant various strengths to the class and are greater than aesthetic changes.

Once on the battlefield, each ship has access to a suite of four abiltiies alongside energy diversion options. Energy can be diverted toward shields, weapons, or mobility, creating a tactical atmosphere that favors both planning (sneaking attacks would benefit from additional attack power) and quick thinking (switching to shields when the healer is nearby).

Standard attacks (LMB) can also be used in the form of a primary weapon and a “sidearm” equivalent, each with advantages depending on proximity of targets.

What to Expect & Match Layout

Dreadnought plays quickly, leveraging map design and size to ensure there's never too much downtime, but doesn't play at the pace a dog-fighting game might. The ships maneuver like modern battleships (just with six axes), so strafing has been disabled to encourage more tactical movement and closer engagement (eliminates some camping).

Our gameplay sessions saw us crushing our enemies in each match – the advantage of having Game Director Peter Holzapfel over your shoulder – and were ruthless and quick. Team play will be necessary in higher-level battles, where each of the ships' abilities will work in conjunction to overwhelm singled-out players or small teams. Some of the combinations are more natural, like that of the healer/dreadnought combo (think: Heavy + Medic) or solo sniper, but others are learned as a knowledge of the game is developed.

Abilities are toggled based upon requirements, like range or availability (cool-down based). The Dreadnought, for instance, can arrange itself in a Black Flag-like circling stance to broadside enemies, tearing their ships to shreds with a single blast. Conversely, quicker ships can easily adjust course to avoid being caught in the broadside of a dreadnought, leaving the behemoth more vulnerable to retaliation. Dreadnought-v-Dreadnought engagements make for beefy, colosseum-like slug-fests that draw attention. Commanded by better players, dreadnoughts begin circling one another like sharks – each attempting to line-up a broadside – while players in supporting roles warp in from nowhere to back-up their tanks.

The Artillery Cruiser is, in its entirety, a gigantic sniper rifle. The ship must be oriented in a way that points the nose of the ship directly at its target, making sniping somewhat difficult but extremely powerful and long-range. When the sniper is being targeted by enemy snipers or encroaching corvettes, it can initiate a dive maneuver (special ability) to rapidly dive and temporarily escape harm, hopefully putting out a distress call to its teammates. Sniping was rewarding and satisfying in that it is intuitive, but not effortless. Snipers are incredibly vulnerable if snuck up on, given their innate vulnerability that the ship must be pointed toward the target.

For players more interested in support roles, the Tactical Cruiser is capable of repairing its teammates and buffing them for a short time. The Corvette is more stealthy in nature (identifiable by the fact that it can cloak), making it an excellent predatory craft for picking-off undefended snipers. Destroyers play similarly to assault classes in FPS games, offering mid-range firing power and mobility (including a warp). This makes them one of the easiest classes to pick-up and play.

We loved our playtime with Dreadnought. Assuming the team is capable of handling the great responsibility that is Free to Play, we'd instantly register for play upon the game's launch. Combat is fun and rewarding in that it's quick, match-based, and doesn't require a prohibitive amount of learning just to move the ship (standard WASD controls + vertical movement, then a few abilities). The focus on teamwork grants a more competitive atmosphere as players rise in rank, but Yager was keen to note that they expect lower levels of play to allow more casual dedication. To this end, we anticipate the community and gameplay environment to reflect that of CSGO.

Dreadnought is more similar to an FPS in its match progression and gameplay, but offers unique six-axis movement and new ways of using maps. Map design is carefully considered, and as players grow better, they'll learn how to take advantage of asteroids, destroyed mining colonies, and other prefab elements to prey upon their enemies. Camping will be mitigated by careful design – like the choice to remove strafing (which we agreed with, after hearing Yager's defense of its removal) – and will almost entirely favor the snipers. This even has its own offset in the form of Corvettes, Destroyers, and smaller maps, all of which ensure snipers can't go unchallenged.

Dreadnought is shaping up to be an enjoyable, truly unique title in an otherwise bland landscape of MOBAs and FPS games. We hope to see the team leverage its F2P style to its benefit, ideally with killer skins and aesthetic options, but the extent of monetization remains to be seen. Yager has a good concept and solid execution; at this point, success will fall upon the shoulders of monetization and balance.