Industry Analysis: A Slow Year for Triple-A Titles, but Watch for Indies 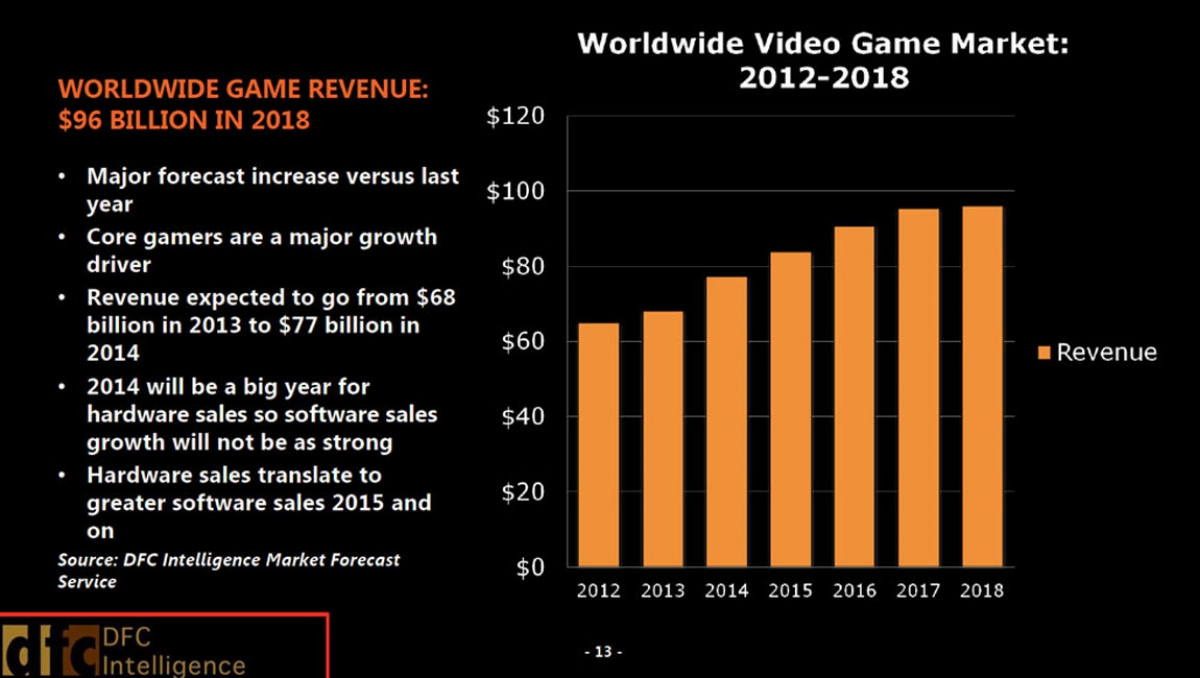 This image is from a previous article we posted, pertaining to global games industry revenue. The image is not directly related to this post, but visually useful.
Gaming Features

The games industry circulates triple-A titles and genres in predictable waves. Last year saw the launch of several multi-million dollar titles, to include Watch Dogs and Titanfall, followed later by Destiny’s $500mm launch, Far Cry 4 and ACU, Dragon Age: Inquisition, and more. 2014 was a competitive year for big-name studios, though the indie scene was not unremarkable: Nidhogg, Shovel Knight, and Goat Simulator all made a huge impact.

2015 has begun with relative silence from big-name studios, giving rise to newcomers like GreyBox – the folks behind Dreadnought and Grey Goo – and other B-rate publishers. Our prediction is that 2015 will be a relatively light year for gaming titles, likely followed-up by a bombastic 2016. This cadence has existed for decades and is recalled even by industry greats like Richard Garriott and Chris Roberts, both of whom joined us to discuss game launch patterns during down-time at PAX East. These slower years are the ones that allow ambitious, medium-sized publishers to carve-out their foothold in the industry.

Following a sustained marketing campaign for TES:O, Bethesda has fallen to silence in the face of its anticipated Fallout 4 launch. Ubisoft seems to have shipped all of its major titles (including a new IP) in one go, making for a high-volume 2014. Rock Star is known to be porting GTA V to PC, with no major announcements expected. There will undoubtedly be a new Call of Duty game this year, though that’s not necessarily that exciting.

These lulls seem to coincide with changes in the game engine and hardware industries. Source Engine 2 was officially announced at GDC 2015; Unreal Engine went from a reasonable $20/mo. + royalty to a free model, demanding royalties only from titles which generate greater than $3000 in gross revenue; CryEngine has continued to iterate on its high-fidelity framework; Unity 5 is now available, with many indie titles making the transition from Unity 4, taking advantage of more advanced shader technologies.

Then there’s the hardware segment. Although graphics processing capabilities are at an all-time high – far-and-away overperforming for most modern games – there are other shifts within the PC industry. NVidia’s Shield console, although lower-powered and curiously running Android, indicates a demand for low TDP HTPC gaming. Steam Machines also echo this requirement in large part, adding the obstacle of a new operating system.

Game development takes time, and as developers continue to work with new engines, with SteamOS, and with the hardware available, it’s no surprise that 2015 is shaping-up to be a quieter year for gaming.

This will be the year to pay close attention to the indie games and B-rate scenes, both of which now have previously unmatched access to game engine technology and SDKs from hardware vendors (Intel, nVidia, AMD, and ARM are now offering support documentation). The level of mechanical and visual quality for non-AAA games should, if the engines are an indicator, skyrocket in the near future.

We’re curious to see whether the accessibility afforded by the major game engines will result in a dangerously saturated environment.