“Your case has been logged for further review. Our understanding is that there is no further help that we can provide at this time and we will now end this call.”

In researching the phone service, we used multiple accounts, phone numbers, and ticket identifiers (or the lack thereof) to “benchmark” support. It almost always yielded the same result: the customer was granted no recourse, no room to reply to the agent's script prior to disconnect, and no empathy, then dropped from the call. Disregarding this alleged policy still leaves little room for excuses, though, given the overall inability to communicate intelligibly with several agents, as exhibited by our recorded support calls. Overall, it was a complaint underscoring the customer experience and apparent treatment of paying users.

Rockstar caught wind of this content, telling us on a call that the company “takes this extremely seriously” and that it has “taken steps to remedy this immediately.” An official media-facing Rockstar spokesperson provided us with the following statement in full:

"We are aware of recent issues players have experienced when trying to contact Rockstar Support, and we take these issues extremely seriously. We have absolutely not instructed support staff to hang up on players who are reporting compromised Rockstar Games Social Club accounts. We have added a large number of new staff to help with the launch of Grand Theft Auto V on PC and in this case some of these new staff members didn’t respond appropriately. We sincerely apologize that these players didn’t receive the high quality experience they deserve, and we have taken steps to remedy this immediately."

It would be reasonable to speculate that, like many organizations offering phone support, Rockstar could likely be outsourcing its call support to a third-party that specializes in handling high call volume. In such an instance, unacceptable support quality could be attributed to poor communication between such a company, its script-bound employees, and Rockstar.

I want to highlight that Rockstar made use of the quantifier “some” when speaking of its inappropriately responding agents, but – through our readers and our staff – the original concerns appeared fairly company-wide. We would not necessarily agree with this quantifier. Regardless, It is our understanding that support calls should no longer terminate with such a cold, dismissive attitude as previously. Let us know if you find this service improvement to ring true in your own experiences.

“We are aware that unauthorized attempts have been made to access Rockstar Games Social Club accounts using email and password combinations sourced from unaffiliated, compromised websites or databases elsewhere on the internet. For the accounts affected, we are in the process of reverting those accounts back to their original owners.

As a result, the ability to change email addresses for Social Club accounts has been temporarily disabled. See the following Rockstar Support article for more information here. As a reminder, it is a good policy to ensure that the Rockstar Games Social Club account username and password is not shared across multiple websites on the internet. For accounts affected with this issue, we are working to respond to customers to reinstate full user access within 24 hours of contacting Customer Support. Please continue to look to the Rockstar Support website for more information as it develops.”

The email lock – although it could open other, hopefully less severe problems – directly addresses email confirmation policy concerns voiced by readers and our staff. Another step in the right direction.

Offering an intended turn-around time of 24 hours is an impressive performance gain over the 9-day wait times our readers have experienced thus far; if Rockstar manages to keep up with its new support promises, this would be among the most rapidly mobilized reactions we've observed to such widespread support issues.

“We're working around the clock,” Rockstar told us on a late evening call. 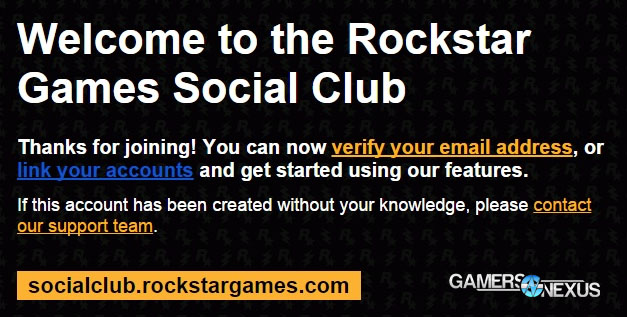 (Above: The email received upon retrieval of a stolen account).

Among the few compromised accounts we used in our email, ticket, and phone support benchmarking, one of the accounts was almost instantly returned to its owner following the phone call with a Rockstar spokesperson. Granted, we supplied the address and account info directly to a media representative, but it has become clear that the company is capable of competent and efficient resolution when encouraged to act.

As for the hacked accounts, Rockstar maintains that it has no evidence supporting the compromise of its own first-party or affiliated server infrastructure. No official explanation could be provided pertaining to the hijacking of Rockstar Social accounts employing unique passwords (passwords absent from known account lists), like one of the accounts we lost; an account list built upon other web password databases would not explain such a compromise. The company has recommended that all Rockstar Social users change their passwords regardless of their use for other online services.

Of course, none of this addresses the gameplay concern of a hacked account: Even upon retrieval, nicknames may have been changed and in-game status could be ruined or griefed–what happens in these cases? It is our understanding – based upon aggregated experiences with account retrieval – that in-game progress can be resolved case-by-case through support. We are waiting for an official response from Rockstar on this question once office hours resume.

Rockstar has reforged its desire to rapidly resolve support issues pertaining to hacked or compromised accounts and, in theory, has somehow “remedied” its phone support inadequacies.

So – has your experience improved?

If you've previously opened a “lost account” ticket with Rockstar, we would advise contacting the company for a ticket update now that the support system has received new attention. If the script has been improved and disconnects cease, it would appear that the userbase is responsible for enacting important change to the customer service experience.

Update 4/23 13:40 EDT: We received this well-written reader email this morning that chronicled the reader's experience with Rockstar's revamped support team. It's very reassuring, to say the least, and may instill confidence that Rockstar is taking account security seriously. See below.

I called Rockstar support this morning after reading your followup call and had a much more positive interaction. I've noted basic details of the interaction below:

- Greeted warmly (overly warmly, even) and told "I've received an email this morning from my higher-ups specifically about cases like yours, please give me a moment"
- Read the statement Rockstar posted on their support site regarding 'in process of reversion within 24 hours etc etc', identical to what you have in your article
- Told I would need to respond to an email from the account email used before the hack, then told I could skip that step due to previous emails sent to rockstar support throughout this process
- Told I would be transferred to an escalation team assigned specifically to this issue, waited on hold for ~5 minutes
- Got a speech about how frustrating this must be and how apologetic they were
- Again they attempt to establish identity by having you email and provide account information. Can skip this step if you've already provided this information and been responding to tickets via email
- Waited on hold for 5 minutes
- Received an email allowing me to change my password, they reverted my nickname and everything.

Took about 15 minutes of phone time but it all worked out easily. Thanks again for bringing light to the issue!

Trevor also indicated that calling Rockstar's direct phone line will put you through to the department with which he communicated. That number is 866-922-8694.