Desura is a digital distribution platform used for the sale, download, and management of independently-developed video game titles. The platform first gained traction in the pre-Green Light days, when it proved difficult – if not impossible – for small-time games to see publication on Steam. Developers could sign-up on the service and agree to a basic contract, leveraging Desura's hosting, sales platform, and userbase to share revenue with the publisher.

In theory, this model resolves several obstacles to successful distribution of an independent game title: Hosting, bandwidth, and distribution are taken care of by a company that focuses more exclusively on such matters; credit card processing is done by a third-party, removing burden from indie site development; and an existing userbase of “over two million gamers” can be exposed to the game.

Most revenue-share models on the internet require hitting a minimum sales value threshold for payment. This is also standard with many web and mobile app ad networks, including some of our own. For Desura, until recently, the minimum threshold for payment was a somewhat high $500 per title after an alleged 70/30 split (favoring developers); payment sits in the developer's account until the minimum value is achieved or exceeded, at which time payment is issued in the following billing cycle.

Coinciding with the issue we're discussing today, Desura recently lowered this value to $250 “for new contracts,” but indicated that “if you are in that situation where you have not met the threshold and it doesn't seem like sales will get that far, you can request an early payout.”

In discussions with developers, we've learned that some have gone unpaid since October of 2014 or longer. Desura has directed fault toward a series of unfortunate events causing payment delays, including:

With each new blog post, more developers surface with complaints of unreceived payment. One developer, “capitaljmedia,” commented the following:

“You take our money, keep it for yourselves, ignore us for 6 months, and then when the press finally finds out about this you act as if there's just some accounting problems and blame it on your sick CEO? Sorry to hear he isn't well, but is he the only one at the company who can actually respond to developer's emails? Stop making excuses and own up to the way you have intentionally treated developers, and maybe as a start how about you actually pay the money you owe?”

Desura spokesperson Lisa “LadyKaiju” Morrison tweeted in a fashion that implicates journalists and unnerved users as rumor-mongering, urging followers that “rumors are just that, rumors. I wish more folks would take the time to ask the source before spreading them.”

The spokesperson further implicated media who picked-up the story, as Polygon has done, by stating “that's typically the way of things” when a follower tweeted that “Desura was unfairly hurt by bad press but we didn't really get the full story.”

We're Here for the Full Story 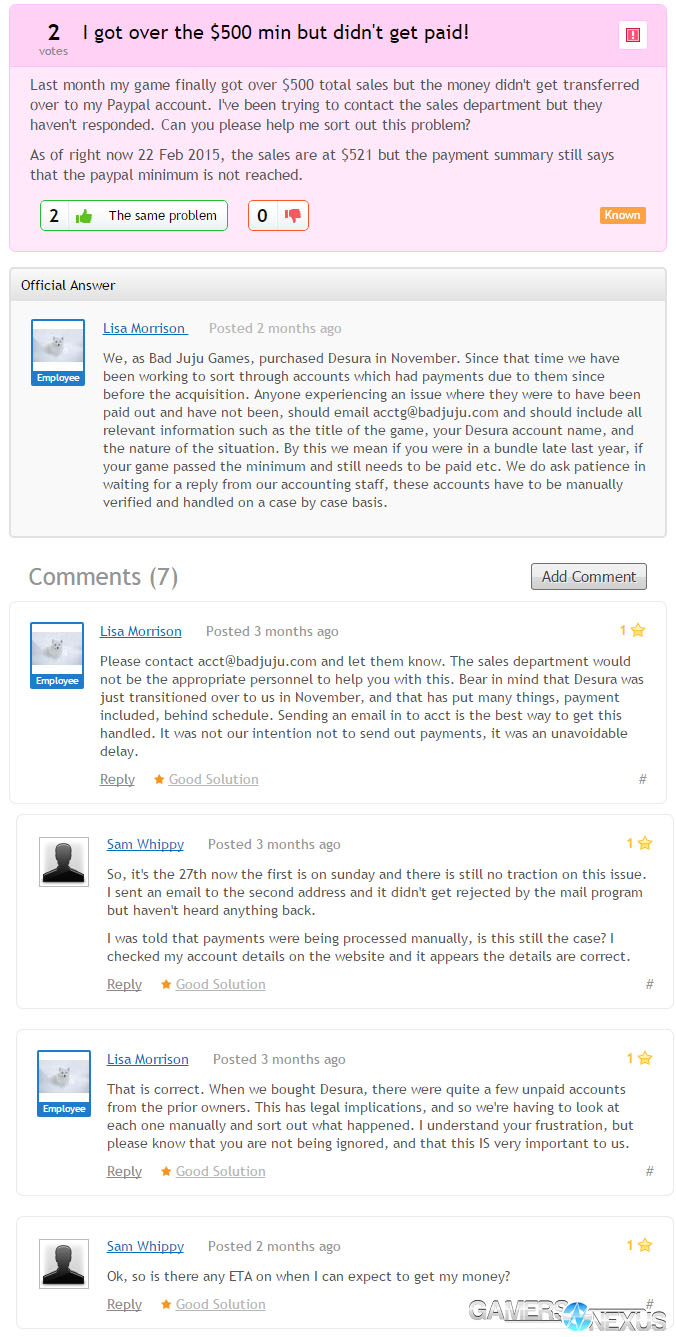 As we've done in the past, it's our objective to provide everyone a fair chance to comment. We've done this with Rockstar, AMD, nVidia, and other relevant players. Starting on May 22, we reached-out to Desura's publicly-listed press account (press@desura) with the following email:

We've received several direct reports from our readers in the development community pertaining to payment handling at Desura. Would it be possible to arrange a call to discuss this matter? We're writing an article summarizing issues of these users -- most of whom claim that payment has not been issued, despite months of communication -- and would like to offer Desura a fair chance to respond to the matter prior to publication.

This is an urgent matter and requires a timely response.

Does Desura have an official statement to go on-record about the lack of payment to its accounts?

Some of the materials we've received suggest that Desura has fallen behind on payments for several months, with the company citing recent moves and mergers as a defense for these shortcomings. Could you add commentary on what's going on here?

Could we speak directly with Tony on this matter to ensure all sides are represented?

Thanks! Number is below.”

After waiting four days – it was a weekend – we followed-up and added the Badjuju press account to copy.

Waiting another day, and with our sources mounting and eagerly awaiting coverage, we tweeted directly at Desura with the following message:

“.@Desura We are trying to reach you for urgent comment on a story pertaining to your business. Please reply to the email ASAP.”

Morrison informed us that she hadn't seen our emails, which led to provision of my email address directly and a request for contact. After being told we'd receive an email shortly, we waited through another day of non-response before tweeting, frustrated, “still no email.”

Growing fatigued from non-response – including a comment that we'd been emailed twice and “it's showing as having been read” – we emailed our developer contacts to see if anyone knew of an active email address at the company that would be checked. Finally, many attempts later, we received a response.

This is normally the part of the story we leave out. It's a boring part of business to play email tag, and a play-by-play doesn't really add to the content. In this instance, though, we're not alone. Game developers seeking payment have experienced similar non-response and ghost inboxes, seemingly leading nowhere. For Desura, lack of response is the core issue. Failing to respond to explicitly-listed press email accounts highlights an underlying problem already known to unpaid developers: Communication is inadequate.

The exchange of emails recapped the company's recent blog post (discussed above), which points toward payment being contingent on direct involvement by the CEO. Morrison informed us that “I don't have an official statement at this time beyond what I've been posting on the Desura group,” adding the following:

“What I can tell you is that this is not, and never has been inability or refusal to pay. What most don't know is that Desura is a handful of people, we're not an ultra corporation such as Steam, so operations here are much more small scale. It's why the automation never got done. Delays have been taken to mean plenty of things on the rumor mill, but it's a simple case of company growing pains, not the scandal which it's been blown into.”

We attempted to arrange a call with CEO Tony Novak on May 29, but were never contacted with executive-level commentary for publication.

Excuses or Not, Payment is in the Contract

It's hard not to label the series of public blog posts and tweets as “excuses” for Desura, but that's ultimately what they are: If it's not office movement causing payment delays, it's a lack of automated payment systems, or the CEO's unavailability, or lost emails, or bad press, or a company acquisition. Even if each of these claims were independently valid as a road-block, it grows increasingly clearer that Desura is painfully disorganized in its business management practices. Any merger or acquisition, one would think, would prioritize the clearing all accounts payable to reduce liability and get the books straight from the start.

It has been eight months, going on nine, since some developers have requested payment. These are indie developers who – if they don't work other jobs, as many likely do – depend on all the small payment streams to add-up into covering business expenses. Desura is choking small developers by withholding payment severely past its due date.

After speaking with some of our indie developer friends faced with these issues, we've been informed that the best way to support afflicted indies is to purchase directly through their own websites.

When a contract is inked, it is both a reasonable and legal expectation that both parties will execute their end of the deal. Desura has repeatedly emphasized its intentions to pay developers, but has also recently placed emphasis on the development of a new client, new forums, and new blog system to “regularly update the community and our developers on what is going on behind the scenes.”

I can't speak for the developers, but I'd imagine they just want their money.

We will update this story if Desura provides an executive-level statement.