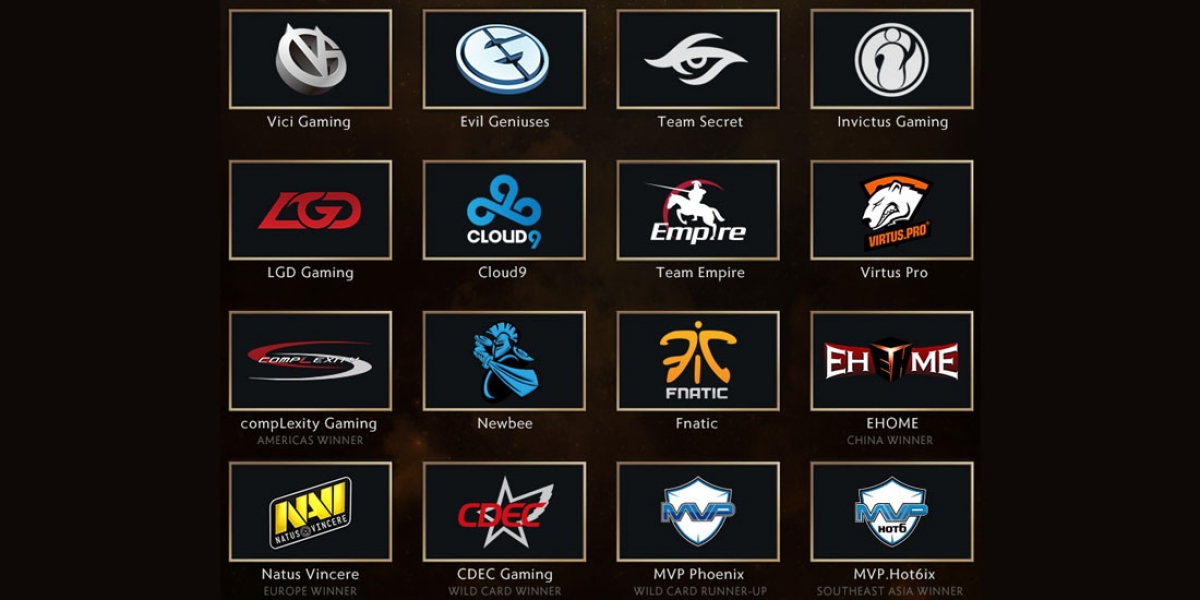 The time has finally come: Monday is the beginning of the main event for The International 2015, Valve’s DOTA 2 eSports tournament. The tournament has officially collected the largest single-event eSports prize pool in history.

Last weekend, four teams made their final gambits for spots in the event; China’s CDEC Gaming and Korean team MVP Phoenix snuck into the final two spots. This past week, all 16 teams battled through a fierce group stage to determine the final bracket for the main event.

Notably, all 16 teams will play in the main event this year -- only the top eight got that chance in 2014. This time around, though, all 16 invited teams will get their chance to play for their share of the record-setting $17,917,288 prize pool.

Formed following from the fallout of last year’s TI, Fnatic was originally Team Malaysia. They managed to catch the attention of Valve and get invited this year while still flying un-sponsored. Since they’ve been picked-up by the UK organization, they’ve not had the strongest finishes, but that could all change this week in Seattle.

Originally LGD’s youth team, CDEC left to form their own team in 2014. Since then, they’ve fought an uphill battle to make it to TI5. CDEC didn’t get handed an invite, requiring a fight through the intense Chinese Qualifier event, only to come in second. This was enough to get CDEC a spot in the wildcard event last weekend. Making it out of the wildcards first, CDEC then went through the group stages to surprise second place in their group. Now they’re facing Cloud 9 in the upper bracket. 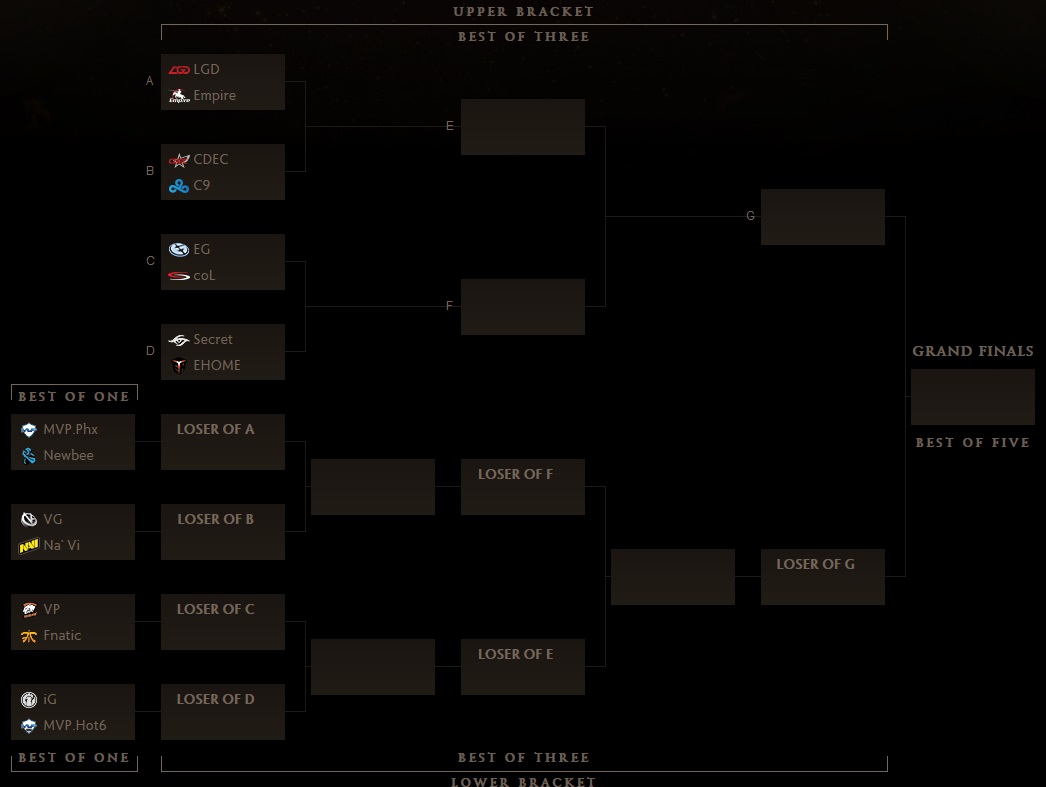 Evil Geniuses’ top-place finish in their group is no surprise. They’re considered by many to be the top American team in the event -- and it shows. Coming off several strong finishes in smaller events, these Americans are hungry for more. Even with the loss of the A-God, Arteezy, EG doesn’t look like they’re about to quit any time soon. It remains to be seen whether EG can secure their first TI win.

It’s become tradition that, following TI every year, there comes a player shuffle. Players quit teams and join new ones, teams drop players in favor of some new talent, the usual -- it’s inevitable. Last year saw three major teams -- Natus Vincere, Alliance, and Evil Genuises -- lose key players. These players gathered together to form Team Secret. The excitement over this mostly-European team has been kept alive by multiple strong finishes over the last year. One of the favorites in the event so far, Team Secret has to keep up with all the pressure that’s been put on them for a strong finish.

All 16 teams have played through the group stage, playing seven of the other competing teams in a series of best-of-twos to determine where they’d land in the main event bracket. LGD Gaming, Team Secret, compLexity Gaming, and Cloud 9 managed to best their group and secure upper bracket spots for this week. Likewise, Evil Geniuses, CDEC Gaming, and EHOME came out on top in Group B -- Team Empire just barely made it to the top after beating Virtus Pro in a close best-of-three tie-breaker. 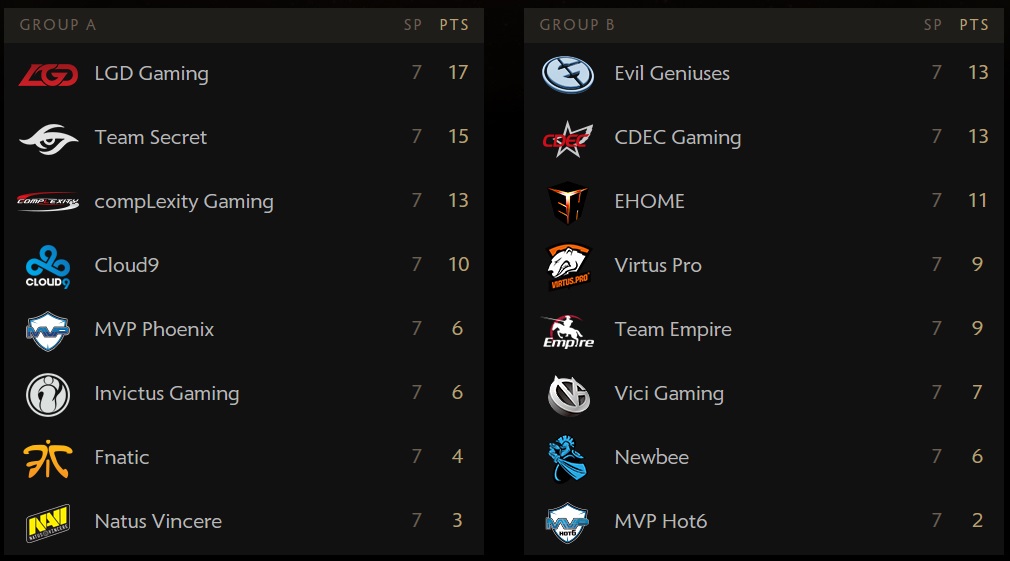 It’s worth noting that three former TI champions -- in Natus Vincere, Invictus Gaming, and Newbee, as well last years runner-up Vici Gaming -- are all facing elimination in the lower bracket of the tournament.

Meanwhile, new teams Team Secret and CDEC Gaming flexed their muscles in the groupstage and secured top spots in the upper bracket. With so much on the line and so many storylines building, the week’s end will undoubtedly prove emotional for the teams involved.

Year-long tensions will begin to unfold this Monday -- not to mention the distribution of a massive amount of cash. Tune-in to the official site to take part in the action or watch in-game using the DOTA2 client.