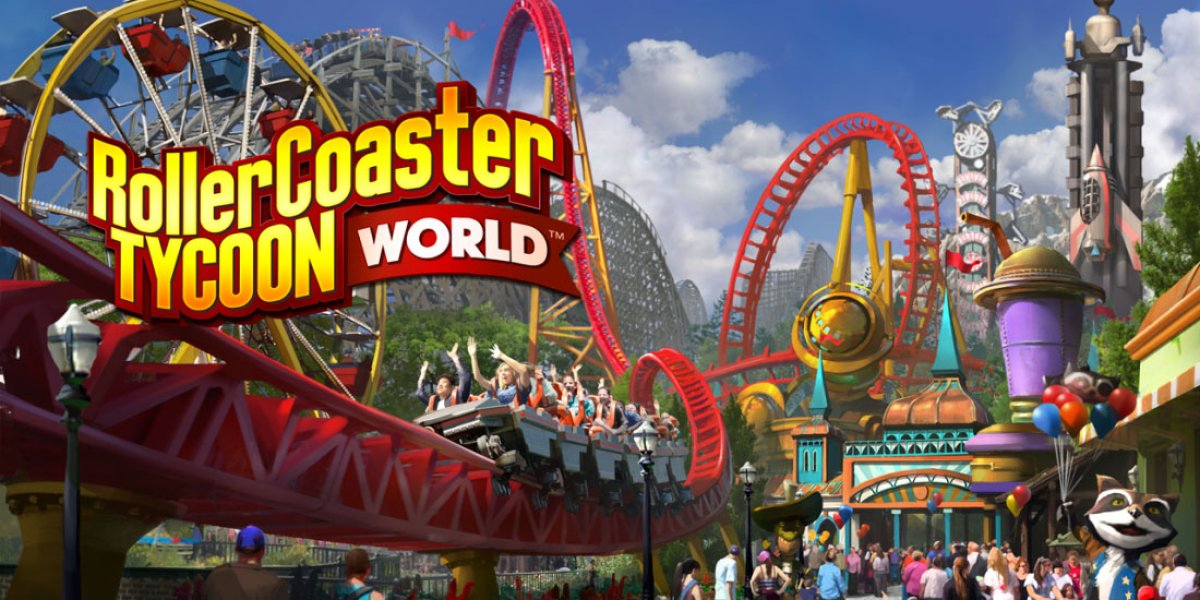 Above is embedded a video interview with Atari’s Matt Labunka. Below information was supported with insight from both Labunka and Nvizzio Technical Director Andy Wilson.

There’s no uncertainty that press demos are notoriously limited in every imaginable fashion – but the most critical is time. RCT is a series that demands hours of time to build a park that doesn’t resemble a failed architect’s worst efforts or fling visitors from the heights of a roller coaster. Until a point at which we can refine our skills, keep in mind that all discussion here is based on limited gameplay experience.

RCTW does not change the core gameplay mechanics or objective from its decade-old brethren. This secures our faith that Atari and Nvizzio understand the most important aspect of resurrecting a long-standing icon. There’s a new interface and placement options for roads of various textures, prefab models, flat rides, coasters, and shops. We’re told that “over thirty” flat rides are launch-ready, with ten coasters planned. Flat rides are pick-and-place, but can be rotated and elevated to meet the demands of the genius (or mad) park architect behind the keyboard. Coasters can be individually tuned, point-by-point, to craft rides of varying safety and excitement levels.

The demo today was focused on sandbox mode, which imposes no restrictions on player creativity. We’re told that campaign mode – the one of most interest for many veterans, I’d imagine – is slated to remove a few of the more tedious park management mechanics. Adjustment of staff salaries will be relocated into something more akin to a budget for specific staffing buildings in-park. Rather than using the claw of fate to drop ill-fated janitorial staff into the game, players should anticipate placement of janitorial or engineering buildings that manage staff to budget.

Speaking of the claw – it is back. That’s a start. 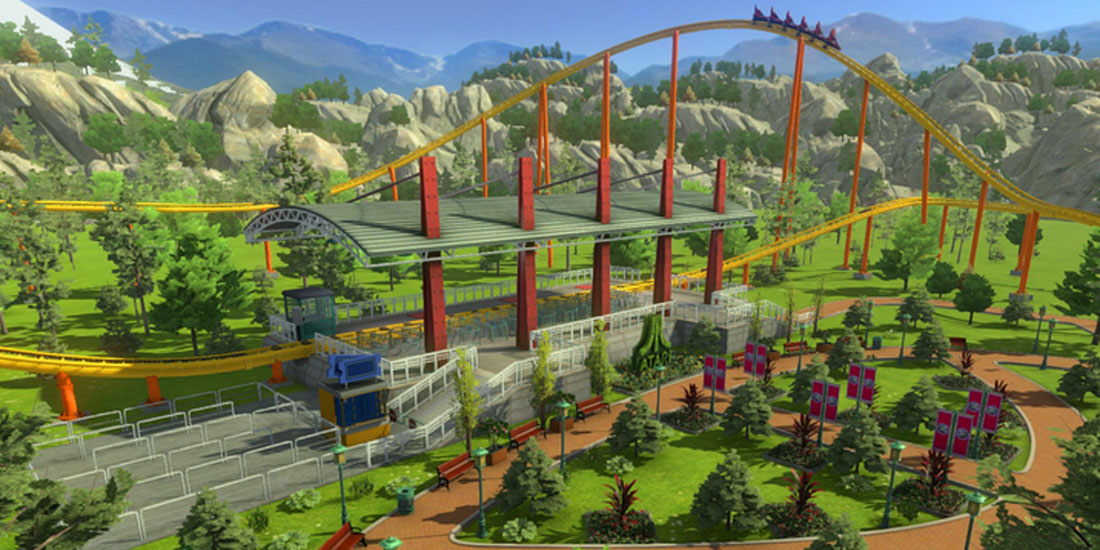 RCTW’s big, no-film-allowed portion of the demo showcased the modding solution. The easiest comparison – though not direct – is the recent Cities: Skylines launch. Players plug-in to the Steam Workshop to upload creations, which include custom models and retextured objects, while quickly integrating with the game’s native interface. It’s all built-in support.

Things are slightly more advanced for RCTW. Modders can minimize the game and begin their work without task kills. It’s easy to modify an existing object (for newcomers), but experienced users can employ 3D GFX software to build completely new models for the game. Once completed, the Unity-based editor allows attribute assignment and configuration for in-game use. The modder can then maximize, add the file from the local directory (or Steam Workshop), and instantly drop the mod into the game. This allows for rapid prototyping and design by ambitious modders.

“Players should be able to make Roller Coaster Tycoon World what they want,” Labunka told me pre-interview. We exchanged a few words about other games that have figured this out recently – TES has always been there, but the wider dev community has been slow on the uptake. Modding support means longer lifespans for games. It’s good business. 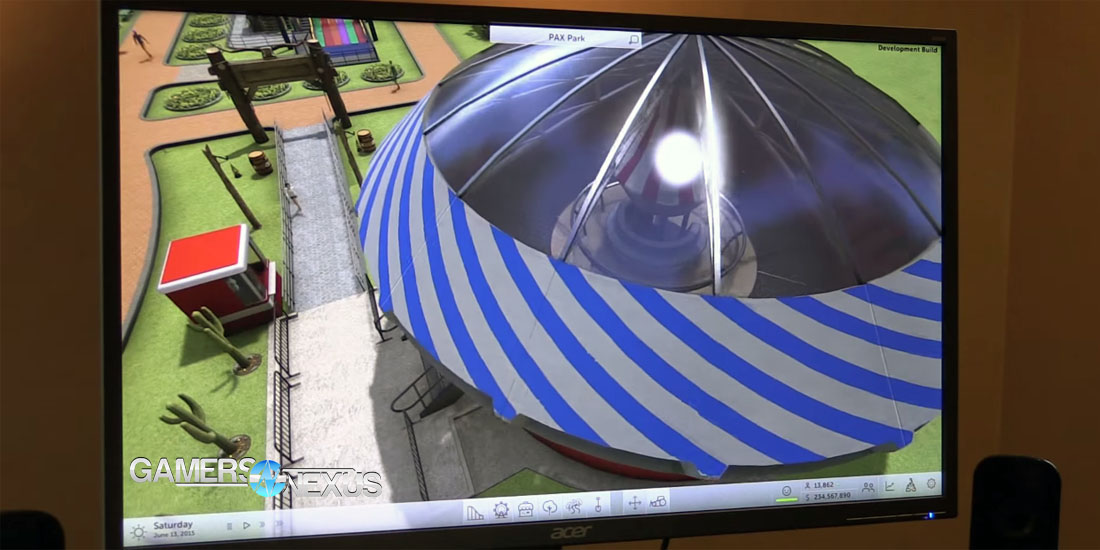 Sticking to RCT’s legacy, RCTW employs a kind-of-realistic aesthetic that pays impressive attention to detail. Ride cables can be seen routed through pathways and individual bolts are textured on ride models. Texture quality is superb and reflects the company’s decision to plan ahead, indicating that “there’s going to be a lot more of these [1440, 4K] displays in 2-3 years than [1080p] displays.”

A few familiar nVidia technologies are present in RCTW, but we’ve only got hard data on HBAO+ at this time. Most of our readers will be familiar with nVidia’s GameWorks platform and ancillary software suites and SDKs. HBAO+, as a reminder, is a marginally more load-intensive alternative to screen space ambient occlusion (SSAO) that smooths-out edge shading of objects occluding light.

Other non-nVidia tech focuses on shader effects and lighting / illumination, seen most easily in reflective, semi-transparent surfaces like glass. 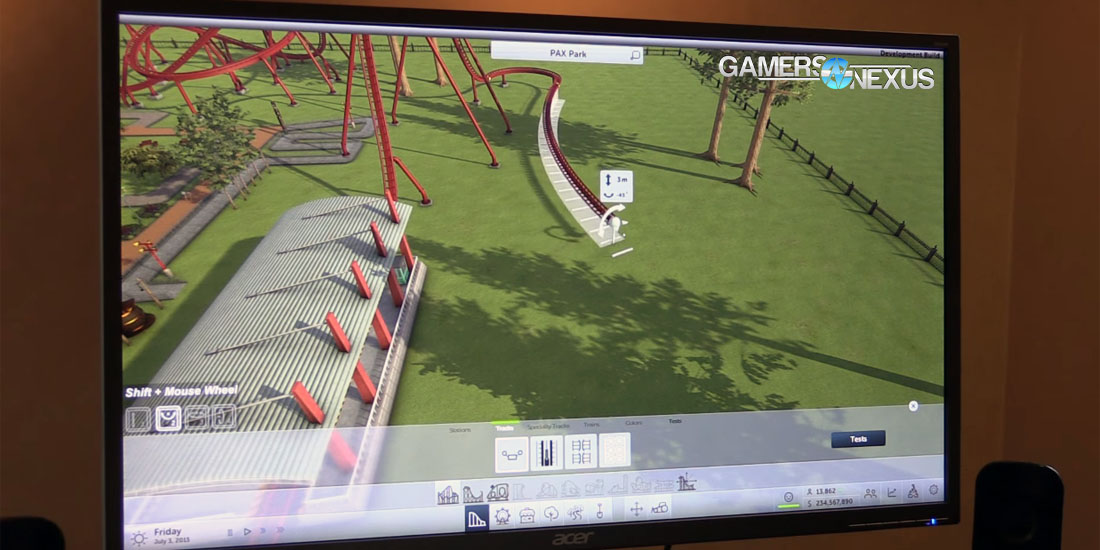 The game is Roller Coaster Tycoon at its heart, but has made critically important moves to bring the game into the modern era. Modding support is huge if executed early and supported by the devs. Other new features show that the team has thought about what lacked in the old games – like the functional void of actual park theming. In RCTW, creating an Asian- or Wild West-inspired section of the park will actually impact who visits and how the rides perform (economically). Riders who like the West will hang-out in that area more than other park areas.

Placement mechanics seem mostly obvious – it’s not a hard game to play, really. We had some difficulty with coaster design and think that better information conveyance or UI/UX could make for clearer interaction. This is something that might – and should – change as the game approaches launch. Green dots on the coaster track lengths, for instance, compelled me to instantly click on them when building a new roller coaster. That wasn’t the right button. I was supposed to just click on the ground somewhere, but that didn’t seem obvious. That said, this was a demo. An early one. We’d be shocked if that didn’t change pre-launch.

Shops are a big part of the game, but were sadly disabled for our first look. Only a few rides were present.

We won’t be able to truly comment on the game’s worth in the market until we’ve got more hands-on time. For now, it has the right feel, it’s just a matter of whether the team can adequately supply players with the right tools to build for hours on end – something that will be revealed soon. We’ll keep an eye on RCTW and ensure everyone remains informed.

Stay tuned for the reviews and previews as the game’s launch nears.