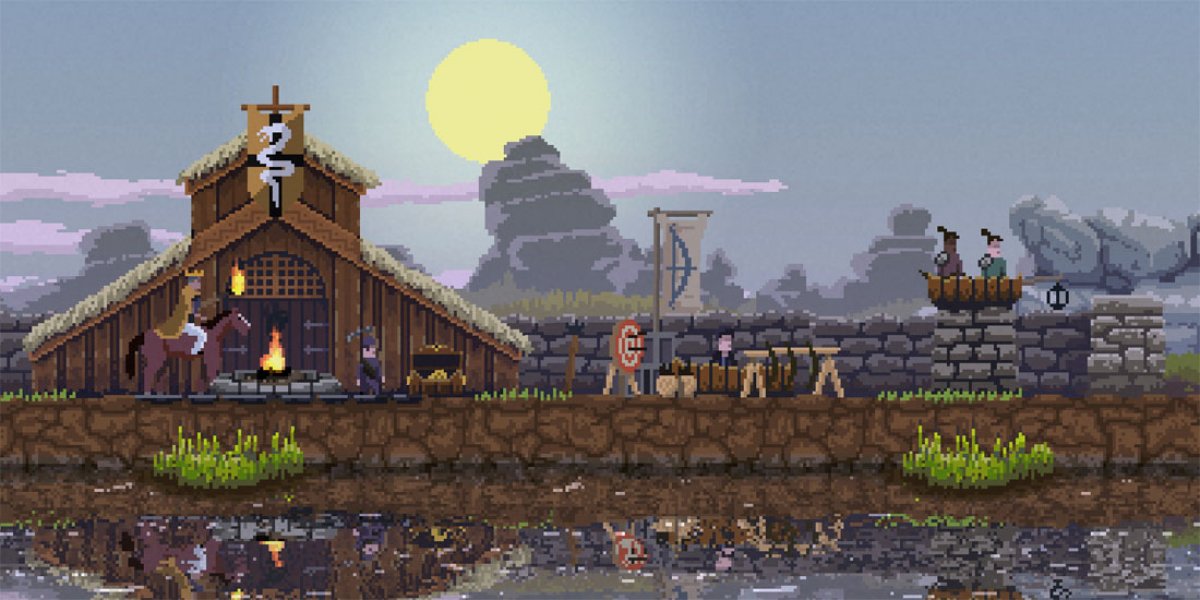 Following its unreasonably high-resolution 4K teaser trailer, Noio & Licorice’s Kingdom made its debut US convention showing at PAX Prime 2015. Kingdom is a side-scrolling, two-dimensional, mono-height kingdom builder game that utilizes a single mechanic for all actions. Players use coins to motivate filthy peasants into building walls, towers, castles, and shops of various types.

We gave Kingdom a short go at PAX 2015, having liked fellow indie game Mekazoo, and paid close attention to the two-button minimalistic input.

The game’s pretty simple: Pick up coins in the wilderness, travel to nearby campsite, and pay a few peasants to join your team. That’s about it. As the game advances, the peasant count grows and buildings get more impressive; in Terraria-like fashion, demon-like baddies from rifts spawn to attack at night. Death is determined by loss of the player’s crown – basically getting hit and failing to retrieve it – and permadeath is on. The game progresses in waves of assault as the player continues to fortify the kingdom, with enemies slowly overwhelming the fortress.

Mechanics are pretty limited, but it’s intentional. The game uses one button to throw gold (pay for construction, hire fighters) and one button to spring. Directional input is limited to left and right. Gold is thrown on the ground near peasants to recruit them into the kingdom; it can then be thrown at various sites, like those for towers or at a shop for archers, where peasants join the fighting class. Archers hunt for food and defend against evil during nightfall, hiding behind player-ordered walls and towers for some level of protection.

A limited economy is developed with hunting and farming, which brings more cashflow for the player’s expansion allocation fund. There was a fixed income during the demo, but we were told the core game does not offer any constant revenue stream and that players must earn their gold.

Kingdom is fairly limited in its gameplay. The input is simple – intentionally – and the objectives are clear. For gamers who like the idea of “city builders” being simplified into two-dimensional, expansionistic kingdoms, the game may be worth a look.

Kingdom’s pixel art is well done, all the way down to fog and water reflections, and has a matching aesthetic across the board. Our few minutes of gameplay made it clear that Kingdom is fairly easy to pick up and play, though we do have some suggestions for the team.

When we saw Bioware’s panel on DA:I at ECGC this year, one of the Bioware producers suggested that “jumping” was added strictly to give the player something to do during the most boring part of any game: Running around. Kingdom lacks something for the player to do during left/right running and the endurance mechanic, which drains our horse’s ability to run, feels like it deepens the boredom experienced during travel. Speaking personally, I’d rather see the removal of endurance or the addition of something – anything – to do while running across the screen.

We haven’t yet had a full hands-on with Kingdom, so more opinions will have to follow a proper playthrough of the game in a non-convention environment.

For now, things are promising for the little side-scroller.