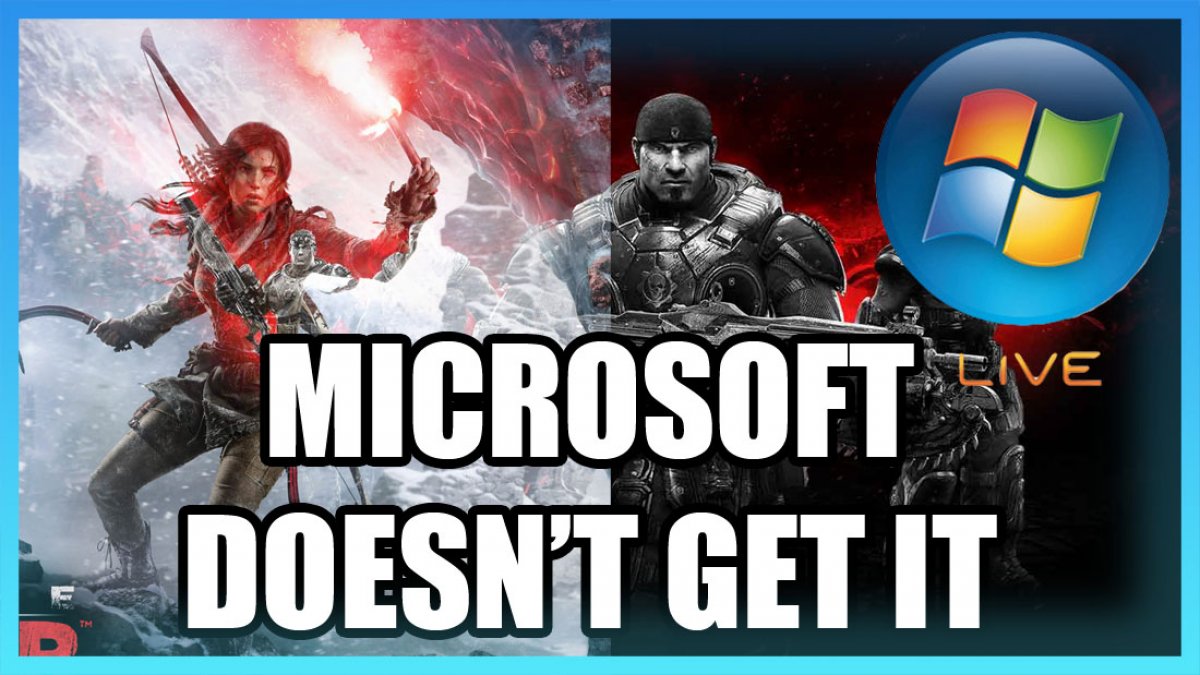 (The above video is a direct read-through of this op-ed; if you prefer the energy of narration and engaging visuals, give it a click).

We thought it was dead for good – but Microsoft's newest incarnation of marketing double-speak calls for a new era of, quote, “unified” gaming between consoles and PCs, which means only one thing for PC gamers: Restrictions.

And that's what we've observed with Microsoft's announcements over the past few weeks. Like the Fine Brothers attempting to trademark the word “React,” Microsoft doesn't quite seem to understand just why their self-aggrandized attempt to “unify” and better gaming scares so many PC enthusiasts. They're oblivious, and they haven't learned a damn thing from the decaying corpse of Windows Live in the next cubicle over.

Here's what's happening: Microsoft's Windows Store, featured in Windows 8 and now prominently in Windows 10, makes an attempt at recreating the mobile app-buying experience but for desktop devices. The Store is now being leveraged as a direct competitor to Valve's Steam, and even promises exclusive titles, like Quantum Break. Quantum Break has effectively been sentenced to death by its Windows Store exclusive launch. In the immediate future, Gears of War Ultimate Edition will also ship via Windows Store, including Windows 10 as a requirement for play.

And that might not be so bad – after all, EA's got Origin, and many of its titles are exclusive to its own store; CD Projekt Red's CEO runs Good Old Games, and The Witcher 3 has enjoyed exclusivity on GOG Galaxy. But none of these titles do some of the shortsighted things that Microsoft does.

With currently available games on the Windows Store, certain game settings are wholly inaccessible or immutable, including V-Sync, which is forced on. This also means that users of Free-Sync and G-Sync displays must forgo their cutting edge monitor technology in favor of Microsoft's vision for PC gaming – which is apparently V-Sync, for reasons unknown to humankind. This is ignoring the fact that Windows Store is basically just Google Play or the App Store: Overrun with absolute trash that was never meant to see light-of-day outside of mobile devices. And probably shouldn't have been on those, either.

The store also doesn't use executable files, or .exes, and instead opts for a special UWP framework file. Critically, this means that control panels from GPU vendors can't tap into the game and make settings-specific tweaks. nVidia control panel and AMD Radeon Settings are included in this, unable to see the UWP format as a playable game. This also means that in-game overlays don't work, as they plainly don't understand what the process is – FRAPS, ShadowPlay, and peripheral macro software are part of this exclusion.

And here Microsoft thinks it's “unifying” the console and PC experience. It feels like an episode of The Office – it's almost painfully awkward as we watch an over-the-top character try to relate with normal people.

One of the game development studios that has experience working with the UWP framework – Nixxes, the folks who ported Rise of the Tomb Raider – indicated that V-Sync and other settings restrictions within the Windows Store version of games are limitations of the UWP framework, i.e. Microsoft's doing. Were you to buy Rise of the Tomb Raider on Steam, where it's available at the exact same price as on Windows Store, you'd own something infinitely more expandable that retains compatibility with screen overlay software, settings tuning, and modding.

Microsoft is trying to blockade users into a sandbox where they can't harm themselves. That's not how PC gaming has ever worked, and had Microsoft learned anything from previous restrictions levied by itself and other studios, it'd know it's not how PC gaming ever will work. These restrictions inevitably bear with them microtransaction-heavy stores that attempt to monetize simple mods that'd be free through any normal framework and platform, mark my words.

So, as Microsoft continues to expand its quote-unquote “ecosystem” that attempts to unify Xbox and Windows gamers, we can only hope that developers don't sign exclusivity deals with Microsoft's embarrassingly misguided gaming platform. Microsoft, if anyone's listening, start by ditching your cumbersome framework, allow normal program structures and wrappers, and grant the same level of control as would be found with any reasonable game distribution software – and I'm including Steam, EA Origin, GOG Galaxy, and others in that list. Windows Store is far from reasonable.

As for all of you watching, our recommendation is simple: Avoid the Windows Store whenever possible, as anyone who considers themselves a PC enthusiast will face frustration immediately with settings and control panel limitations, not to mention API and operating system requirements.