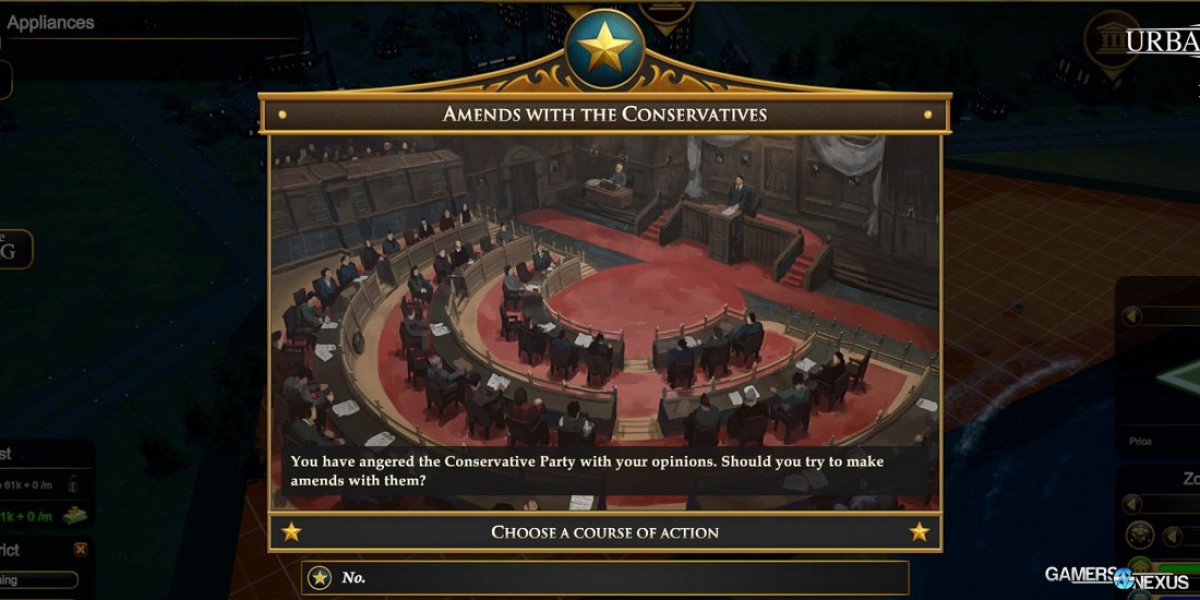 Kalypso is recently best-known for its Tropico series of published city-builder games, and the company's now publishing “Urban Empire” (developer: Haemimont Games) under the genre classification of “City Ruler.” Urban Empire deviates from traditional city building mechanics by limiting some of the finite control; micro-management at the street-placement level, for instance, is not afforded by Urban Empire. As Mayor, the player's time is best expended on fighting the good fight – that is, backstabbing or shmoozing political rivals. Just like real life, except the Kalypso team has assured us that the game's win condition isn't political gridlock.

But the game does ultimately still contain major city-building elements. Different layout templates are available for pre-planned city districts and streets, placed by the player, and then buildings are manually established as funding or needs dictate. Layouts rotate road position, industrial districts, market/shopping districts, full housing, and mixed housing placement. It's all fairly standard for city-builders – some buildings auto-populate into sectioned-off construction zones, pursuant to population and needs, and others are manually positioned. With regard to zones specifically, “mixed housing” is the one that stands-out – this is unique to city-building games. Like in old, populous cities, the bottom 'layer' of the building is dedicated to commercial operations, while the sky-rise portion gets rented to occupants. This is the first time (that we're aware of, in our fairly extensive experience) that a city-builder has officially built-in mechanics for mixed housing like this.

The mixed housing fits in well with the earlier era of the game, too. It starts in the 1800s and spans through 2020 (play may continue, but ground-breaking news ceases). This lends itself to establishing quaint, efficiently-built towns that ultimately explode into sky-lining metropolitan cities. Players can manually build typical service and important buildings, like religious structures and special market places. Certain projects require the approval of City Council – like establishing a new district (placing a new 'template' for city expansion) – which is negotiated from within an interface that resembles UK parliament. Multiple parties arise as time moves on (liberals, conservatives, socialists, and so forth), progressing through five eras that build or destroy political relationships. 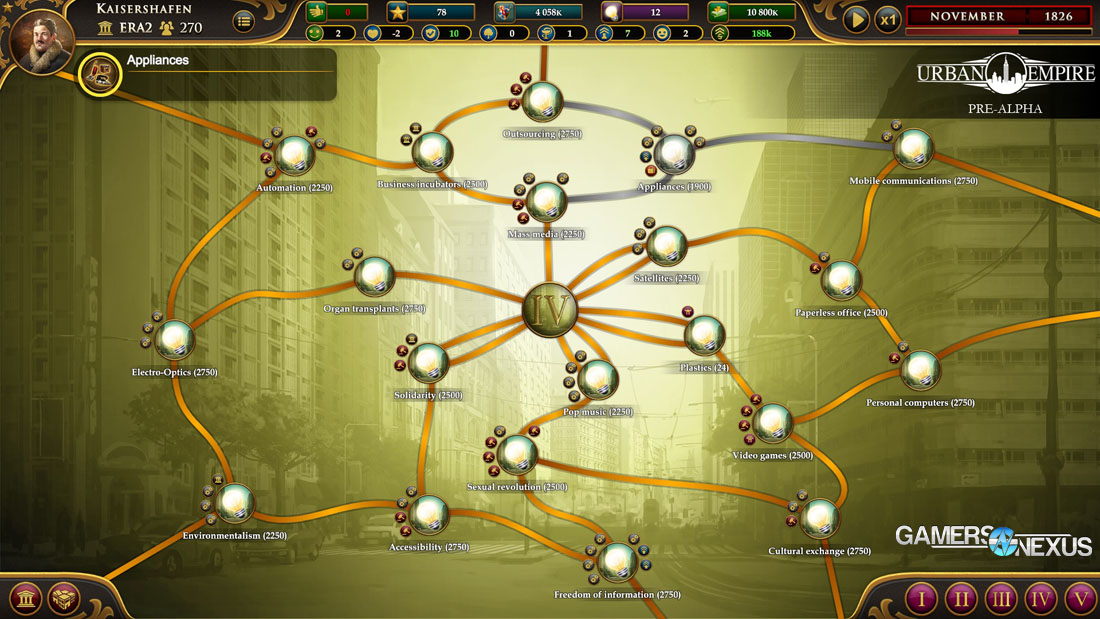 The game starts in the Industrial Revolution, moves toward National Identity (around the collapse of the Ottoman Empire), Conflict of Values (rise of rights for women, reduction of racist policies), Dualism, and Digitalization (present day). Our on-site presenter explained to us that “you can't just be an asshole,” referring to the change of policy as society grows ever more accepting, “you won't get re-elected.”

Re-election is a requirement for winning. By making friends with the right parties and winning favors, it's easier to secure a long-standing seat in power (the same for your successors, who take over as your ruling avatars pass away or retire). To lose an election is to lose the game; win conditions include remaining in power through 2020, economic victory (richest city), “most remarkable” victory (city contains important landmarks), political victory (favored by all parties – very difficult), and scientific victory (research). There is only one lose-con, and that's failing to be elected every X years (we did not learn how frequent election cycles are).

There are five primary resources to the game:

Each is defined above. Resource management is a typical exchange of cost-benefit, and creates decision points in each election cycle which require careful planning for resource expenditure. Goodwill is among the most important, as it can help ensure certain projects (which may be disliked by political rivals) are seen-through. Goodwill is gained and lost by allying with other politicians or threatening them. It's almost like a tabletop card game – you might catch a rival in an affair, and can decide to publicly out them, save it for later (blackmail), or keep it quiet. There is no globally “wrong” choice – each has a perceptible impact on immediate and future politics, depending on the game. 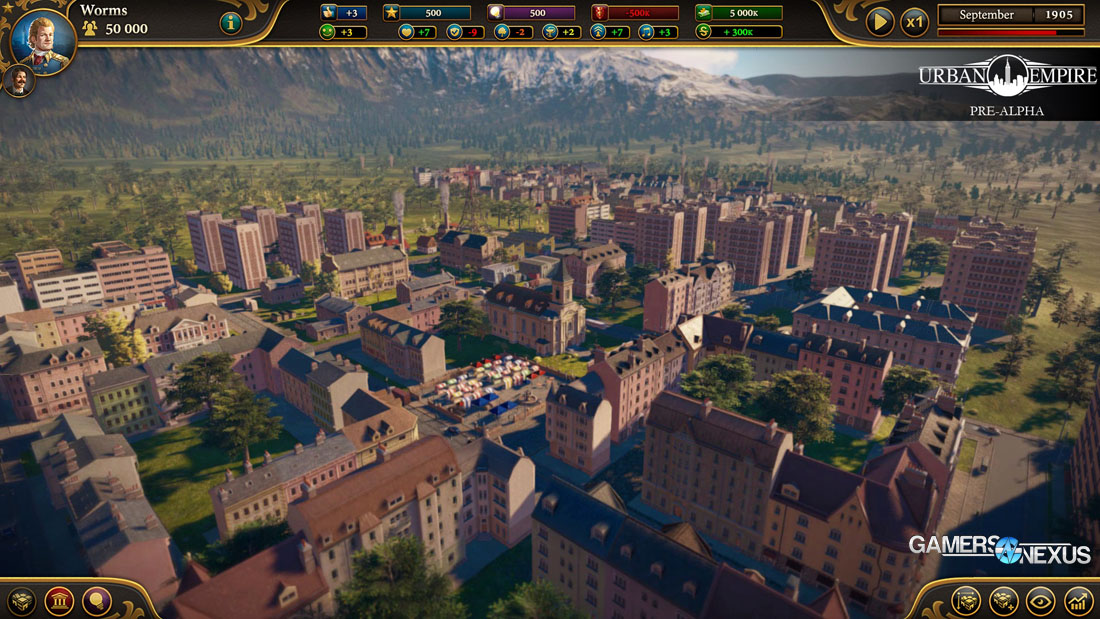 Aside from construction, edicts must be issued and “events” faced as time moves on. There are more than 1000 events in the base game (these are global catastrophes, local phenomena, crises, intrigue/discovery events, and so forth), and the team is targeting Steam Workshop integration. An events editor will be made available to players who'd like to expand the game. Additional modding tools have not yet been disclosed.

An interesting bridge from this expansion dialogue, though: There is discussion of an “Americas” DLC pack in the future, should launch go well, which would add the US to the game. Just in case the current political environment is in any way displeasing, you'd be able to fix it with Urban Empire. Or not.

More on this title in the future. Release date is "Fall 2016." Steam store page here.