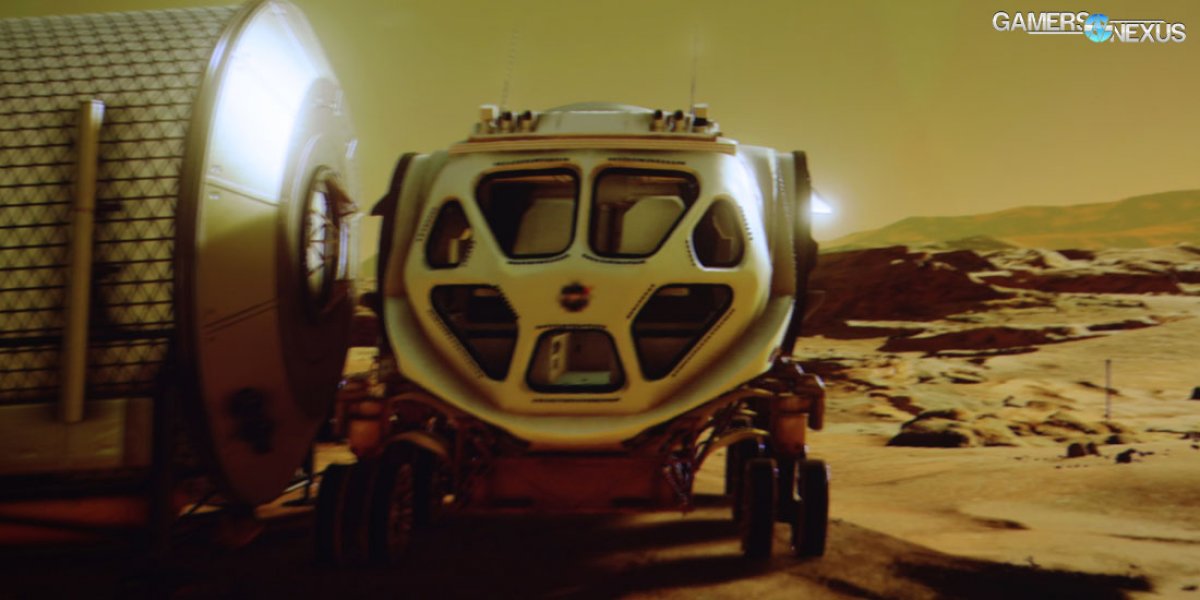 The player takes control of an astronaut attempting to build a habitat on the surface of mars. The astronauts are selectable from multiple nations and will interact with NPC commanders and NPC-operated rovers, who assign tasks and missions for completion. A base camp is established on the red surface, with expansion camps growing into lava tubes beneath the surface. Lava tubes are a unique feature to Mars – subterranean caverns tunneled-out by lava flow, let standing thanks to the reduced (1/3 Earth) gravity of Mars – and serve as our expansion camps within the game.

Mission assignment tasks exploration and settlement expansion. The surface is presently 64 square kilometers, but the gameplay space will ultimately be scaled inward and closer to 8 sq. km. (turns out, there's only so much fun in wandering across barren desert of Mars). The team is ultimately interested in using its simulation of the planet to look back four billion years, making an attempt to replicate Mars when it still had liquid water and ice.

Core mechanics presently consist of walking and jumping on the surface – pretty limited – and operating a rover with rotational wheels. The rover is guided through rocky terrain and uneven surfaces; with assistance from NASA's Johnson Space Center, it's also physically accurate in its wheel movement. The Fusion team was granted access to drive a rover in NASA's “back yard,” where they set to studying its interaction with terrain and obstacles. 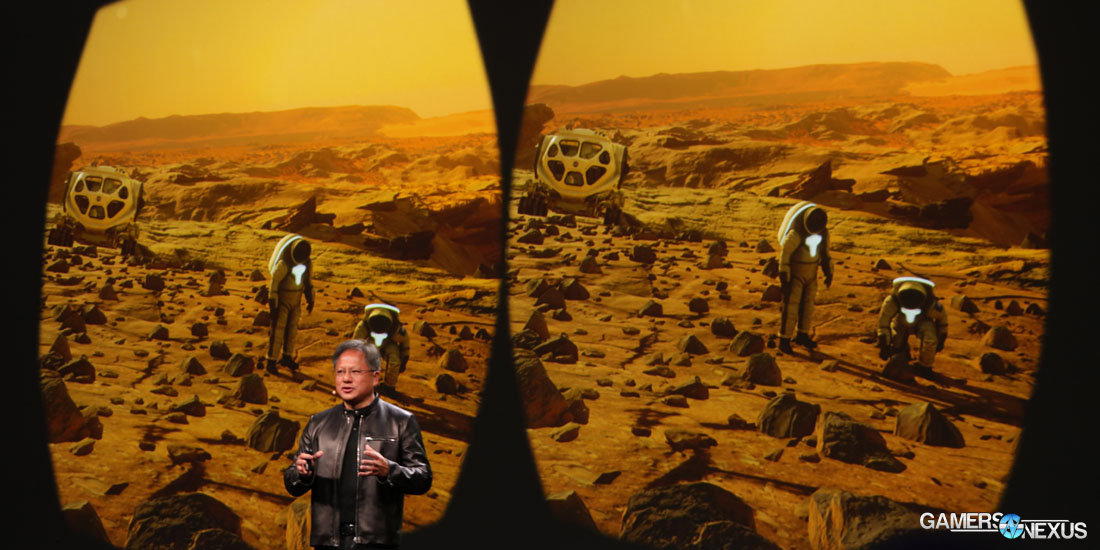 Global illumination and HDR were used in the initial demonstration. The team is currently deciding whether they'd like to opt for baked lighting to reduce load (framerate requirements are high for VR titles, and limit graphics technology). Physically-based rendering (PBR) is used in some areas of the demo, and can be learned about in greater depth in our CryEngine interview.

On the topic of engines, Mars 2030 is on Unreal Engine 4 – one of many photogrammetry-aided VR demos on the platform – and makes use of custom nVidia physics calculations. Graphically, satellite flybys of Mars have provided visual data required for color accuracy and terrain deformity / height accuracy. Albedo of the rocks and surface was determined by the team by working with a set of real photographs. Cameras sent to Mars are, from our brief discussion with the team and our limited understanding of shooting on Mars, color-calibrated (white balanced) for Earth shooting. This means that the color leans more toward the blue-end of the Kelvin scale, making it easier to pick-out details in the surface. Think of wearing yellow cycling or hiking glasses – it's a similar concept of light filtration for isolating or minimizing details of a specific nature.

For the game, the team corrected color to be more accurate to a human physically standing on Mars. This moves away from the blue spectrum a little bit, creating the red-orange dustiness of the planet. 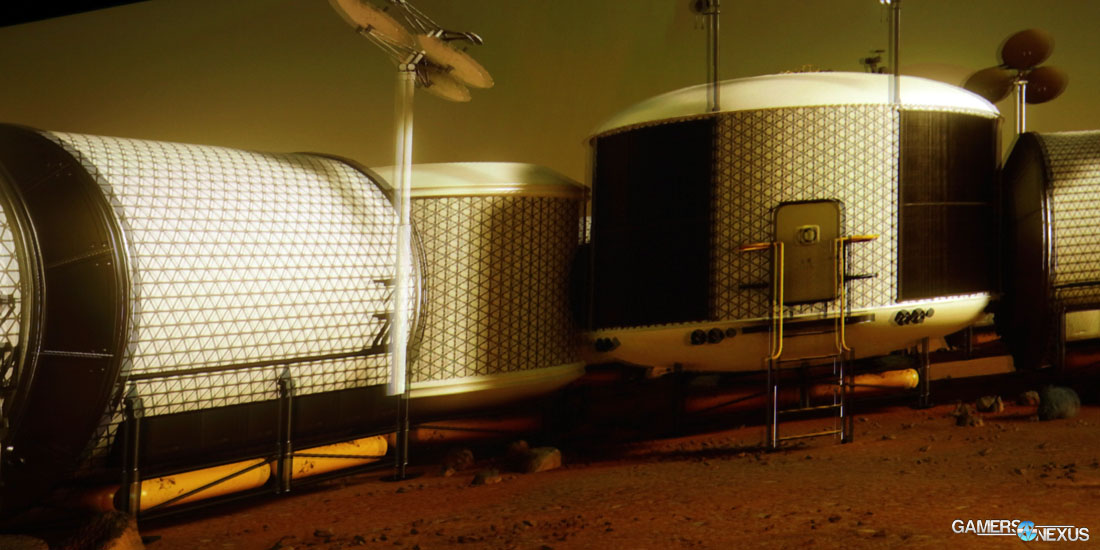 This section is heavily opinionated and entirely subjective. You may disagree in some ways.

I tell everyone the same thing at these shows: “VR is technologically impressive, but I've yet to be impressed as a gaming consumer.” There are different types of gamers out there – I play for mechanics, which hasn't yet translated well into VR. Immersion is OK, but it's not why I play games. VR is largely about immersion.

Mars 2030 interests me. The open-world nature of the demo (and seated play) make it infinitely more playable to a mechanically-inclined player than a standing Vive demo – like the Star Wars one – which generally feel shallow and loses the cool factor after five minutes. The mind wanders. Making 6-inch movements to deflect bullets with a lightsaber isn't fun; it's not mechanically challenging for “core” gamers. Neither is walking around a sunken ship and looking at whales, or putting food items into a pot. Or standing in a KotH circle and shooting at The World's Most Generous Hit Boxes to kill zombies – which almost feels patronizing, really.

That stuff bores me. I'd rather be sat in front of a monitor and given deep mechanics or punchy, innovative input. The Rift and the Vive, to me, are most interesting as a new form of monitor.

Mars 2030 has more promise for players who familiarize with this viewpoint. It's got plans for missions that plot an interesting arc, it's got open-world exploration that should theoretically feel like it has a point (unlike the Everest VR demo), since the exploration leads to colonization and mission completion. The graphics are good – again, unlike the Star Wars demo's hideous textures – and Mars is beautifully color-coordinated. The lighting and PBR we observed reminded us of Star Citizen's graphics, a comparison made with great praise, and bring-to-life the otherworldly atmosphere of Not-Earth.

I'd play it again. Anyone who's followed the site over the past year knows just how rare those words are. Replayability of these demos is low, in my opinion, and to walk away from Mars 2030 thinking “yeah, that seems like a real game” is about the highest praise we can offer. And, as a bonus, it's going to work off of VR devices – so folks who just like space can have fun without the major investment.

Worth a watch, certainly.