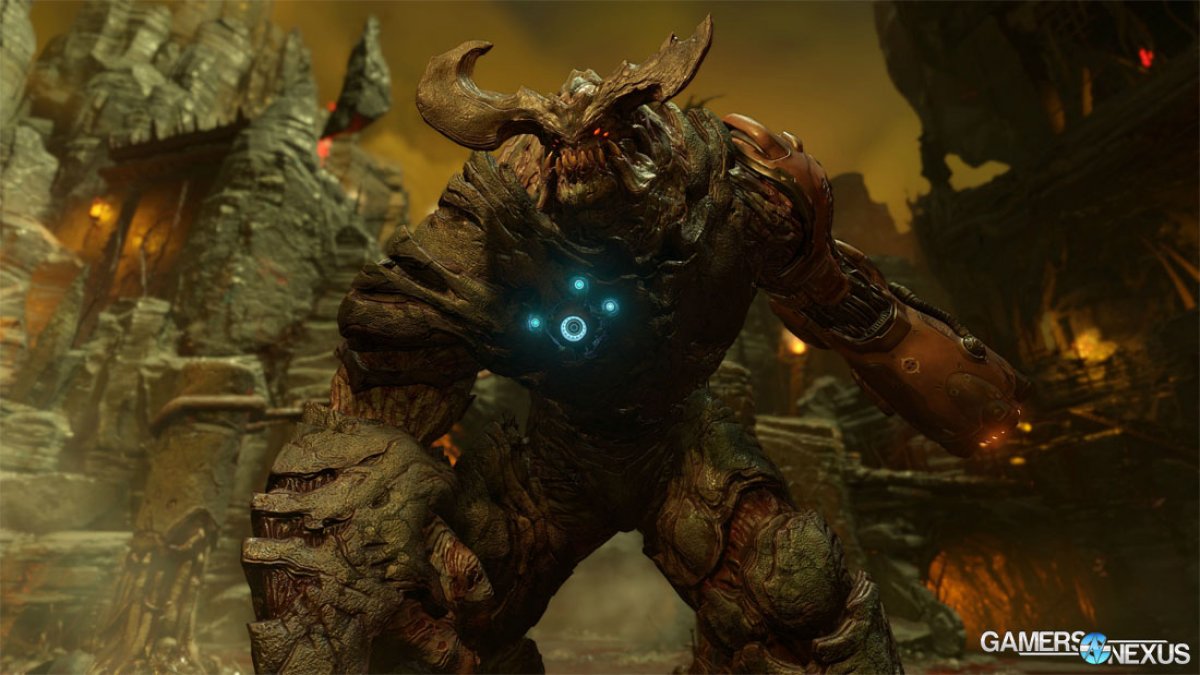 V-Sync On Despite Settings

Enable developer mode and then use the console to issue commands. Disabling v-sync is easily done with the “r_swapinterval” command (issue: r_swapinterval 0 to toggle v-sync). Otherwise, the video options offer a software toggle to enable Adaptive or full V-Sync, or to disable it entirely.

Console is accessed with the tilde (`) key, or ctrl+alt+`, in some cases.

Due to a game timing bug, framerates cannot presently exceed 200FPS and are capped. We discussed this when talking about the GTX 1080's performance with Doom, when id Software told press that the game timing bug would be fixed shortly and that it didn't really arise until the GTX 1080 was put into test systems.

There's no good bypass to this right now, and there likely won't be until id releases an official software update to resolve the game timing bug.

As if splash screens weren't annoying enough, Doom flaunts its superiority by offering the slowest, most agonizing launch screen known to gamers. The video playback is choppy and lags to a point that the system appears brought to its knees, but is deftly resolved with a game restart. We have not been able to reproduce the splash screen lag more than once. It seems to occur only upon fresh game launch, and the game functions normally after this.

If using Steam, splash screens can be disabled with these flags:

Add those under the properties & launch options for Doom.

id Software is working to improve multi-GPU performance in the immediate future. Doom does not seem to support multi-GPU scaling for either major GPU vendor right now – at least, not well – and can exhibit instability or crashing in some reports we've seen. If you're getting unplayable juddering or poor performance, it may be worth manually toggling SLI/CrossFire for this particular game.

When working with AMD's latest driver set, we noticed that Radeon Settings was conflicting with the OpenGL API for Doom. If we ran the game at, for example, 1080p while the desktop sat at 4K, the game would relegate itself to one corner of the screen. We eventually realized that AMD Radeon Settings' “Display” tab was overriding our in-game settings; so, despite the “full-screen” configuration in Doom's options, we were still getting a windowed output.

Both nVidia and AMD have brand new, Doom-ready drivers. Be sure to download and install the new driver set for your video card, as each pack contains optimizations specifically made for Doom. If experiencing FPS drops or black flickering, these drivers may resolve those issues.

If you've encountered other issues or have found solutions, please post them below for the benefit of others!