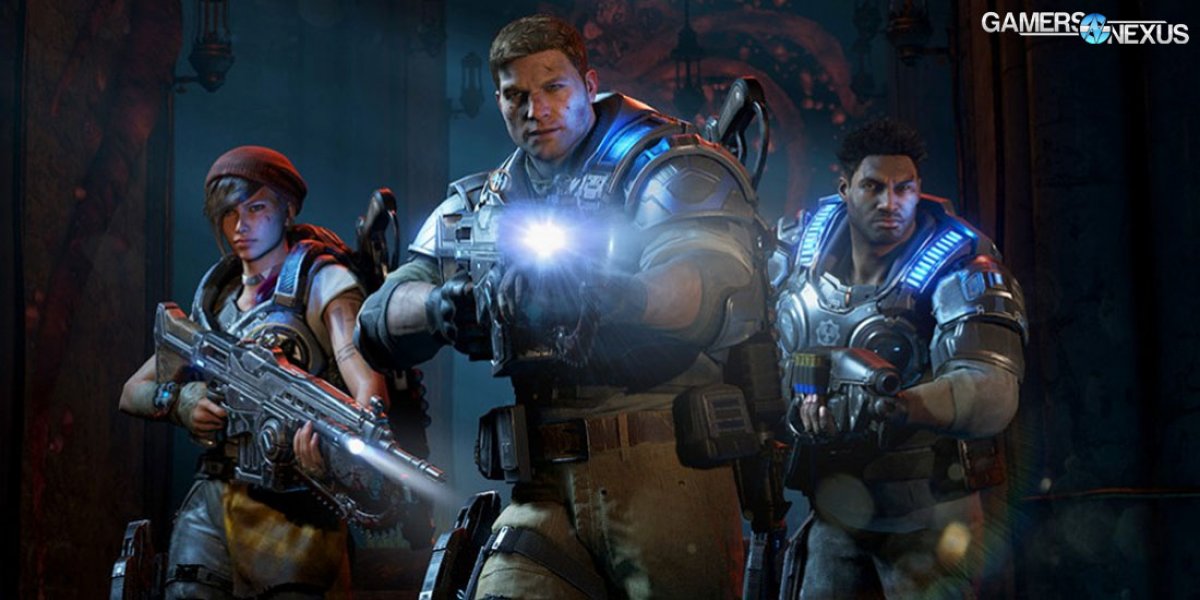 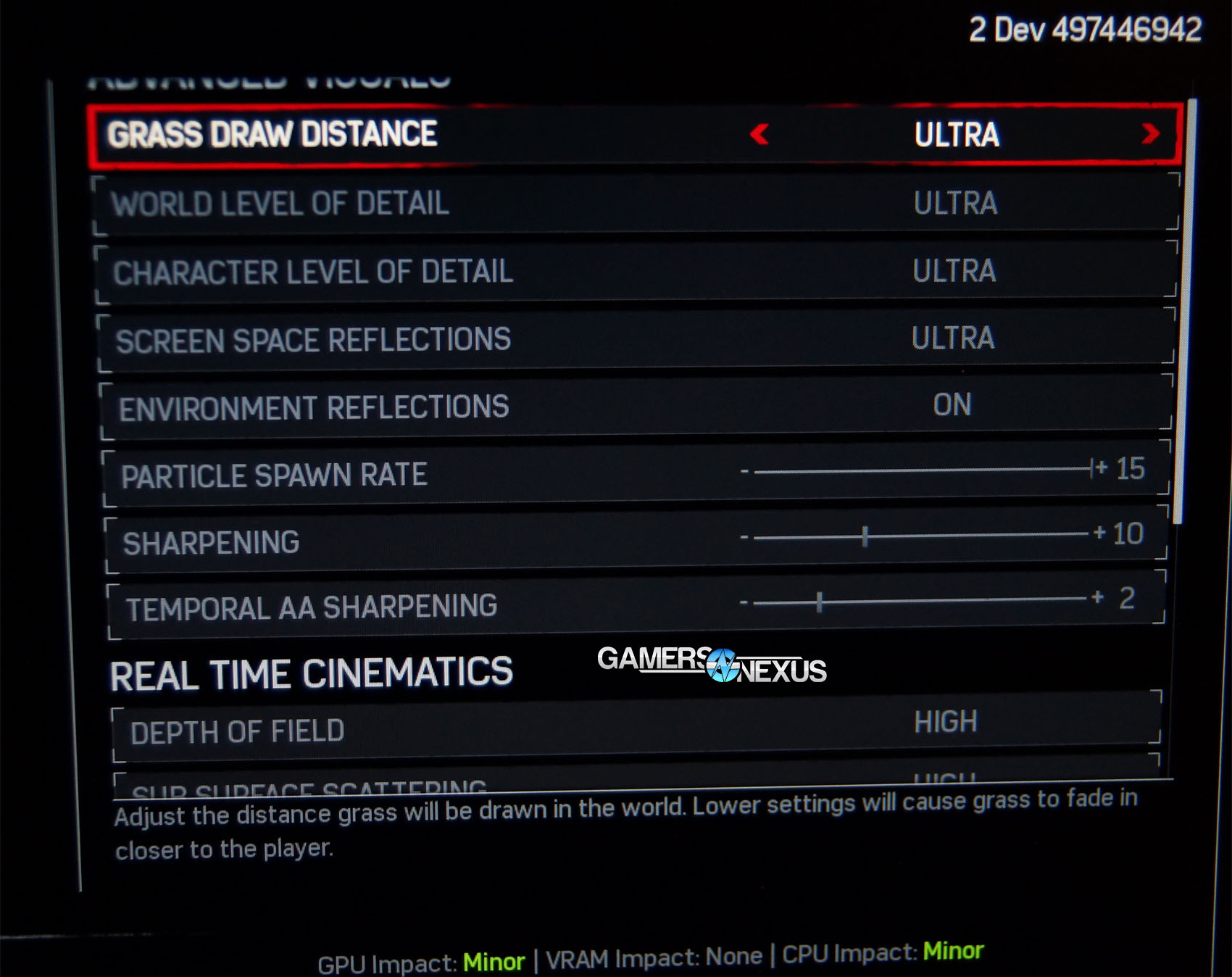 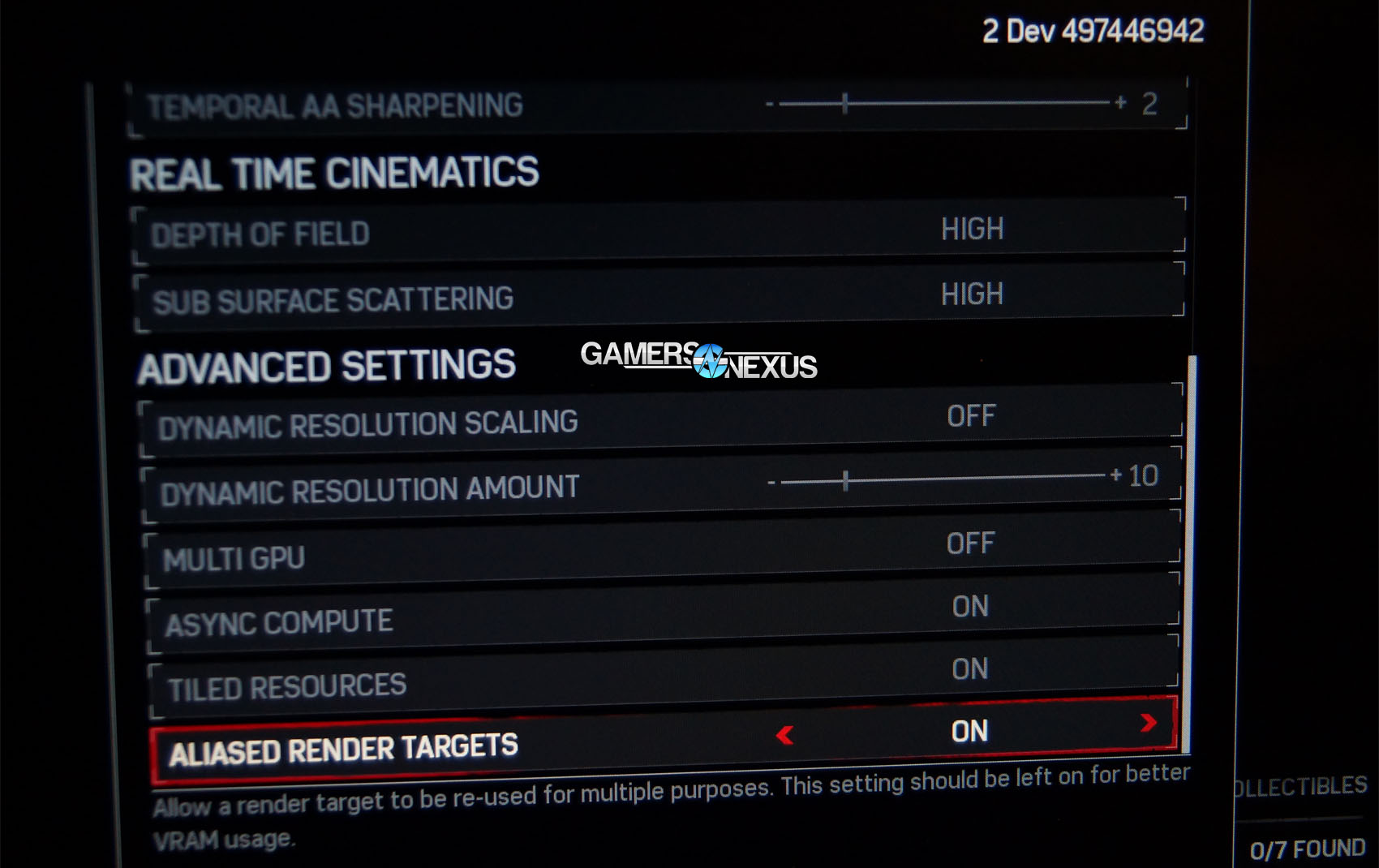 Grass Draw Distance: Adjusts distance grass is drawn, also impacts grass fade and pop-in as settings are increased. Maxes out on “Ultra,” and is rated for no VRAM impact with minor CPU and GPU impact (assuming the menu is complete). With previous tests, we've seen grass draw distance can massively impact overall framerate (in GTA V), but the performance hit depends on developer implementation.

World Level of Detail: Adjusts global LOD scaling for world objects. LOD (Level of Detail) scaling is used in games to gradually increase or decrease mesh quality (among other parameters, as defined by devs) to control performance. A higher World Level of Detail configuration would allow for more geometric complexity in meshes (smoothing out object appearance), and would keep this complexity for farther distances than a lower setting would. Seems to max-out at “Ultra.” Read about LOD scaling and meshes in our BLOPS3 Optimization Guide.

Character Level of Detail: As with the others, appears to max at “Ultra.” Character LOD is as above, but applied specifically to character models within the game. If you wanted higher character primitives density for more intricate faces and bodies, but needed performance budget from elsewhere, World LOD could be modified down to allow this.

Sharepning: As in other game titles, sharpening increases the “hardness” of object edges and peripherals. Also a slider.

Temporal AA Sharpening: Temporal Anti-Aliasing is processed over time – hence “temporal” – and produces filtration which is interdependent between frames. Temporal anti-aliasing analyzes two frames (A & B), then applies anti-aliasing in a way which is more compatible with movement. This reduces “marching ants” or shimmering lines.

Depth of Field: DOF settings dictate the intensity of object isolation from simulated lens focusing. DOF bears the same meaning as within the world of cameras, creating that “bokeh” blurring effect aroudn the perimeter of the focused subject. This is a filtration effect.

Sub-Surface Scattering: Sub-Surface Scattering (SSS) was recently detailed in our “Graphics Technology of Paragon” content. To recap: SSS is a lighting technique that has its most explored use cases in character skin. A ray of light is traced as entering the character's skin (or monstrous equivalent), and is then traced below the surface of that material. That light refracts within surface particles, like blood vessels and cells. SSS is often isolated to screen-space (depending on the engine), so only objects within the camera frustum are actively performing sub-surface light tracing calculations. The end result is more human skin; by way of example, the skin between fingers and along ears is exceptionally thin, and SSS will create an “inner” glow of red when a light shines through that thin material. This is still a relatively new technology to gaming at only a few years old, and has proliferated with hardware advancements.

Multi-GPU: Gears of War 4 will be a native DirectX 12 game as released on Microsoft's Unified platform. Multi-GPU will need to be enabled to support multiple graphics cards. We have not validated this officially, but it's likely that a multi-GPU toggle is indicative of MDA (multi-display adapter) support, similar to what's found in Ashes of the Singularity, as opposed to LDA (Linked Display Adapter) or LDA Explicit.

Async Compute: Enables asynchronous compute pipelines to improve GPU processing speed. Commands can be queued asynchronously (without reliance upon one another) in the same way that asynchronous web development impacts page loading (e.g. allowing scripts to execute in parallel, rather than sequentially). This will leverage dedicated hardware units and new architecture low-level algorithms to reduce burning cycles as assets load.

Tiled Resources: Reduces VRAM consumption on resources by avoiding the storage of tiles which will go without access for a particular scene.

Aliased Render Targets: Improves VRAM performance by reducing utilization. This is done by re-using render targets for multiple requests of the same target. We are presently unsure on if this setting impacts visual quality in a perceivable fashion.

Settings within the game options menu are equipped with useful GPU Usage & CPU Usage indicators, along with a VRAM request size indication. A few games have begun following this direction, which we think to be largely popularized by GTA V.

Gears of War 4 uses art that was natively authored for 4K, something we talked about in depth at GDC, and marks the game as one of this generation's forefront titles for graphics quality. Support for dynamic resolutions is built-in, so “over-powered” graphics hardware on more limited monitors (e.g. GTX 1080 at 1440p or 1080p) can increase render resolution, then scale down to the display. This increases pixel density and object clarity.

Gears of War 4 will also support what Creative Lead Chuck O'Shea says is an “elevated framerate.” It is presently our understanding that GoW4 will unlock its framerate to some degree, allowing scaling past 60FPS on PC. We will talk with the team more to learn more about graphics optimization.

We're also told that an in-game benchmark will be prepared for Gears of War 4, making for easier work running performance analysis.

Xbox Play Anywhere will also be supported, allowing Windows 10 copy holders to play the game on Xbox One.

Learn more about Gears of War 4 soon. We'll be speaking with the developers prior to the game's October 11 launch.