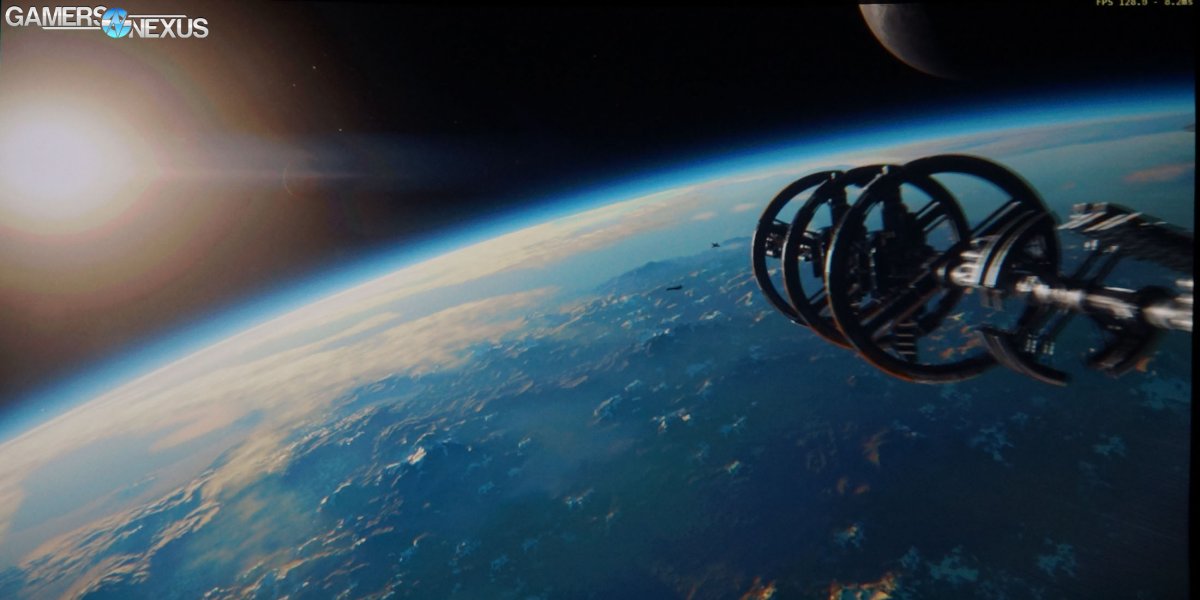 Opening the Presentation & A Recap

The Star Citizen presentation began with an overview of the past few years of work, using timelines to illustrate employee count growth, launch of SC Alpha builds, and openings for new office spaces globally. A few shots of Roberts' original Kickstarter trailer were also re-presented, followed by quips from the CIG CEO that he “look[ed] a little bit older there,” laughing, “it's a little bit like the US presidency, I think.”

Brief laughter later, Roberts detailed that the Austin studio now has 54 employees, Los Angeles is at 64, Manchester at 191, and Frankfurt at 54, for a total of 363 total staff. The team has grown considerably as CryEngine talent has become more available to CIG, accelerating development significantly.

After gratuitous thanks to the community, Roberts handed off the mic to John Erskine, VP of Publishing and Online Ops in the Austin office. Erskine focused entirely on the community side of development, running through engagement statistics that report 7 million comments on the RSI website, 300 million thread views, and more than 40 thousand organizations (effective 'guilds').

Benoit Beausejour jumped on stage to pitch Star Citizen's “Spectrum,” a response to Roberts' demands for bigger thinking with the community back-end. Beausejour began with an introductory slide on Spectrum, declaring the tool a real-time web application that “offers all community communications in Star Citizen.”

Spectrum stands as the foundation for in-fiction and out-of-fiction communications. The chat module is the first aspect of this communication structure, using rich text and images to modernize real-time discussion.

The second aspect is a forum overhaul that marks a departure from the “old-school” model of refresh-based threads. The new forum will, in addition to a reskin, feature live updating and real-time threads for a more dynamic discussion platform. Private messaging has also been updated, though we don't have many details just yet.

Voice, though, is the biggest addition to the game (and received immediate applause). “We needed to be able to carry voice outside of the game,” Beausejour said, explaining that out-of-game communication will enable ongoing comms between organizations with players who may be between loading screens, .exe reboots, or other out-of-game events. “Namespaces” accompany the inclusion of voice, and allow for private forums for the game's Organizations. This builds-out the community structure to better enable Organizations to internally handle logistics.

And, the final point of Spectrum, is that it'll become the web-based Launcher, as we understand it.

Of the tool, Beausejour said:

“In-game locations [will] create dynamic lobbies. You can see spectrum as the real-world arm to the universe that Chris is building. When game events occur and you need to be notified, Spectrum will be your transmission. […] Spectrum will be available inside the overlay on the game, so you'll be able to see who's talking, […] open the Spectrum UI and chat with your friends in the game.”

Spectrum will be deployed to mobile and tablet devices for on-the-go comms with in-game (or out-of-game) friends.

A demonstration of the functional Spectrum tool took place next, showcasing a rapid, quick-to-load forum engine with real-time updates, notifications, and reactions (upvotes or otherwise). Spectrum's forum interface has flattened the list to eliminate paging.

The Spectrum forum engine is a “few weeks out” from its first release, which will include chat rooms and full control over lobbies. Plans for the next iteration include:

The Spectrum overview transitioned into a Polaris sales in-fiction hype video, already detailed online in the days leading to CitizenCon. 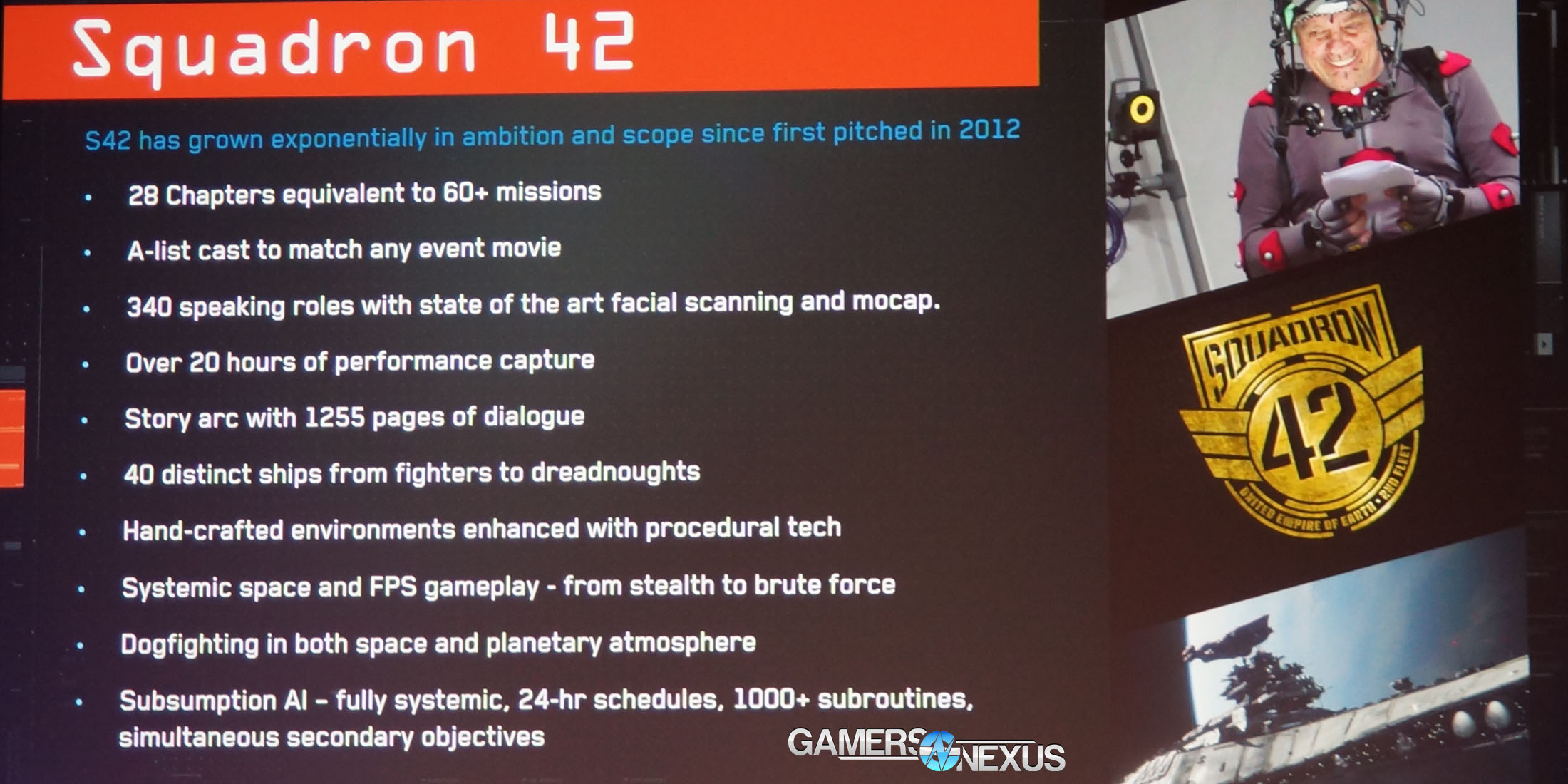 Above is the slide that opened Squadron 42 discussion, Star Citizen's single-player counterpart. Roberts joked that dates are still being withheld – at least, hard dates are – but that things are progressing well. What we know so far is that SQ42 will host 28 chapters, equivalent to 60+ missions, with an A-list movie cast (we've already covered). That list of cast members includes some not-yet disclosed actors as special surprises, according to Roberts.

The singleplayer campaign will feature a 1255-page dialogue for the story arc, fleshed-out with the Subsumption AI system that we've also already detailed. Subsumption grants AI full lives, similar to what's seen (at a top-level) in The Elder Scrolls. AI will have 24-hour schedules, shifts, and needs that the AI module will actively resolve during gameplay. This includes pathfinding logic, combat logic (which has been improved for SQ42), and mission system integration with that AI. AI will now fly together as wingman with the enhanced flight AI, meaning a (probable) departure from fleeing and abandon-happy AI.

As for the hardware discussion, Squadron 42 includes GPU and CPU optimizations alongside memory optimizations. We'll likely look into this more with Roberts, Zurovec, or Tracy at a later date.

Roberts followed this slide with a note that, “I gave an interview about 3 weeks ago and probably spoke too soon,” referencing our talk, noting that Squadron 42 doesn't have a major in-game unveil today. Roberts noted that an upcoming part of the presentation would hopefully make up for this. 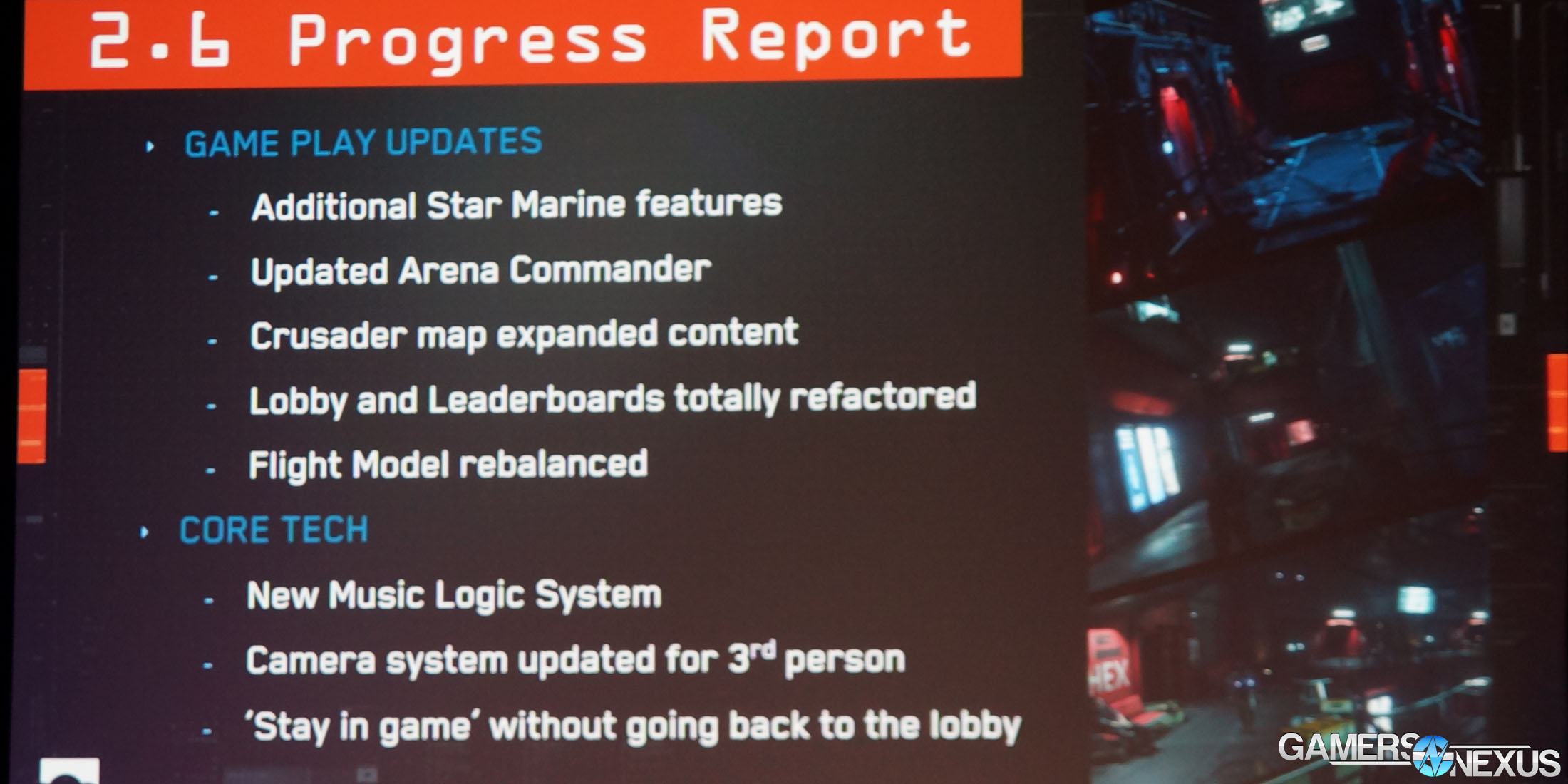 Star Citizen's early test division will soon be working with a 2.6 alpha build of Star Citizen. That update includes overhauled Star Marine features – like vision stabilization and the vestibular-ocular reflex that the team has worked on – and revamped Arena Commander flight controls.

Roberts sped through roadmap updates for 3.x patches. The slides below contain almost all of the information given at the presentation. 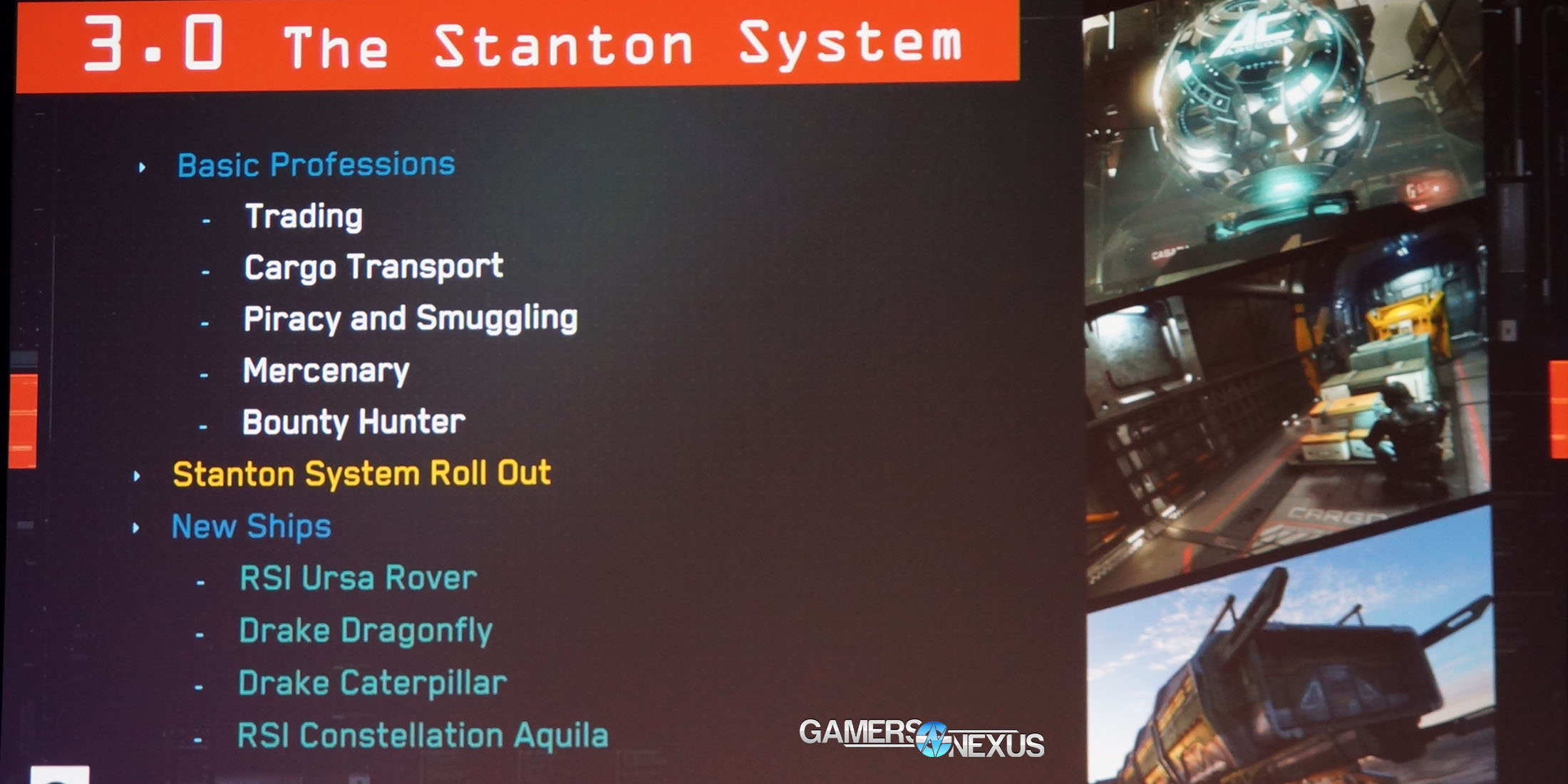 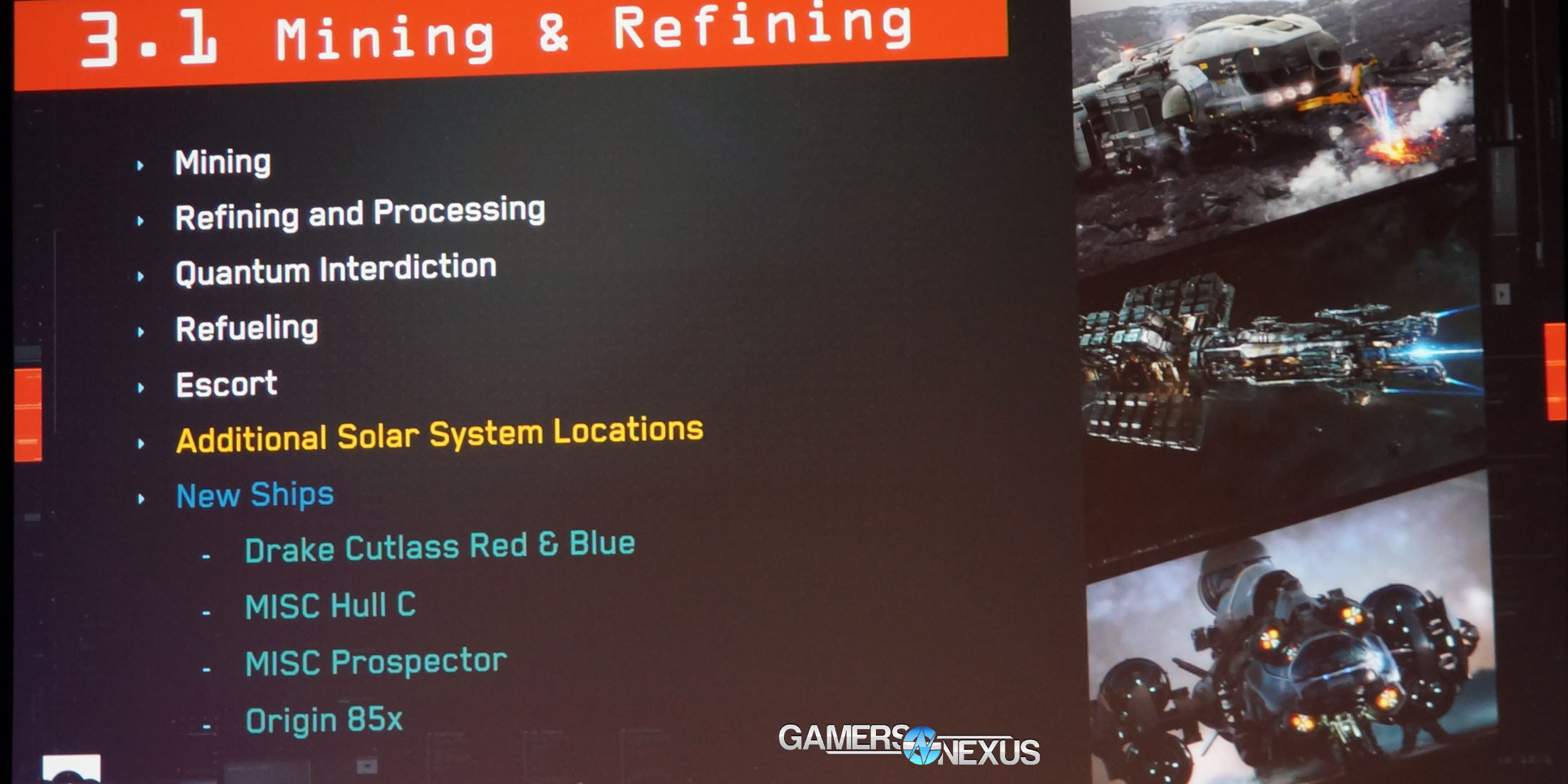 The 3.1 roadmap (above) speaks primarily for itself. The 3.1 update will be months away from 3.0 and has no hard release target, but will allow for mining, processing, and quantum interdiction (pulling players out of quantum travel). 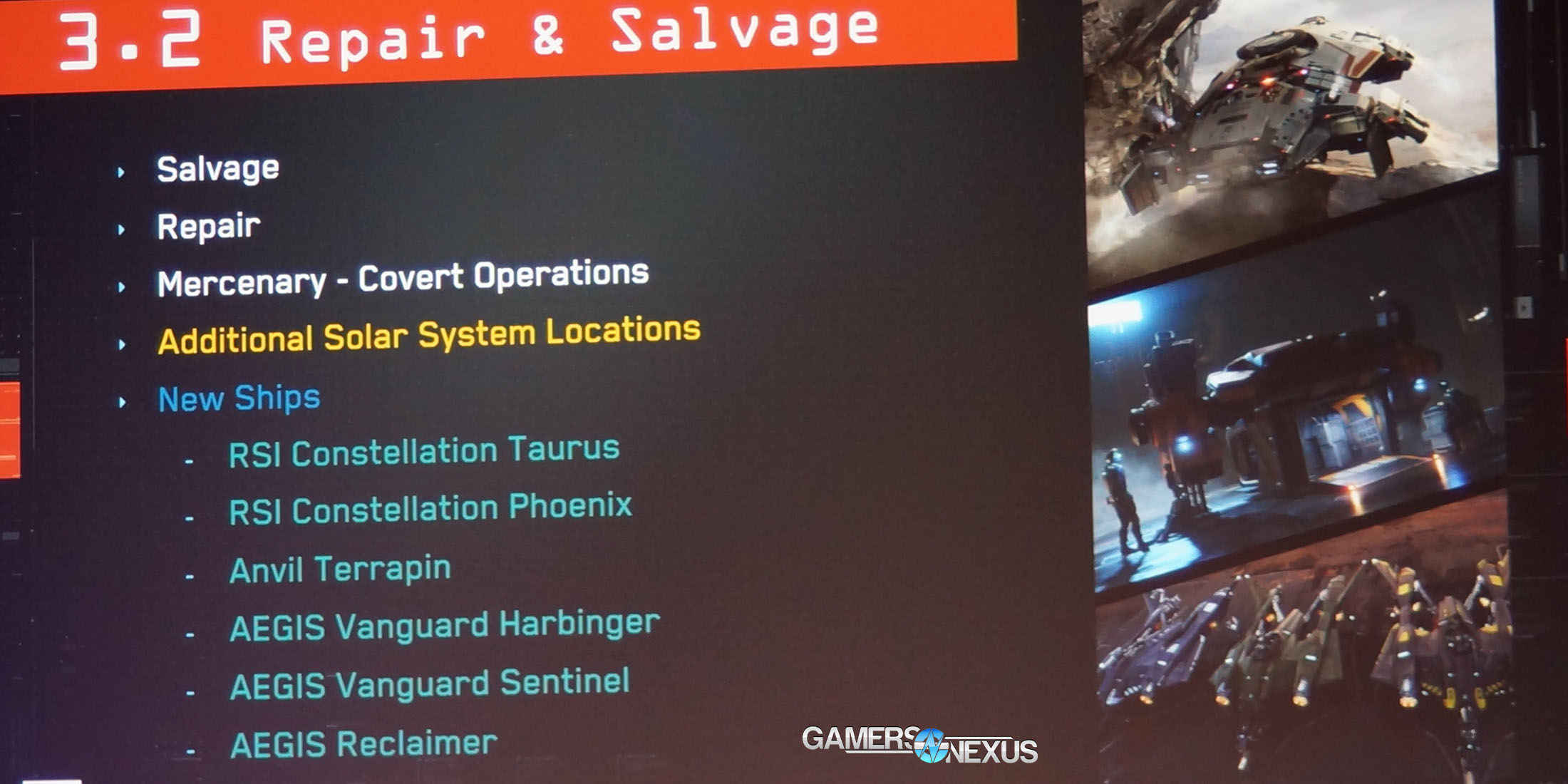 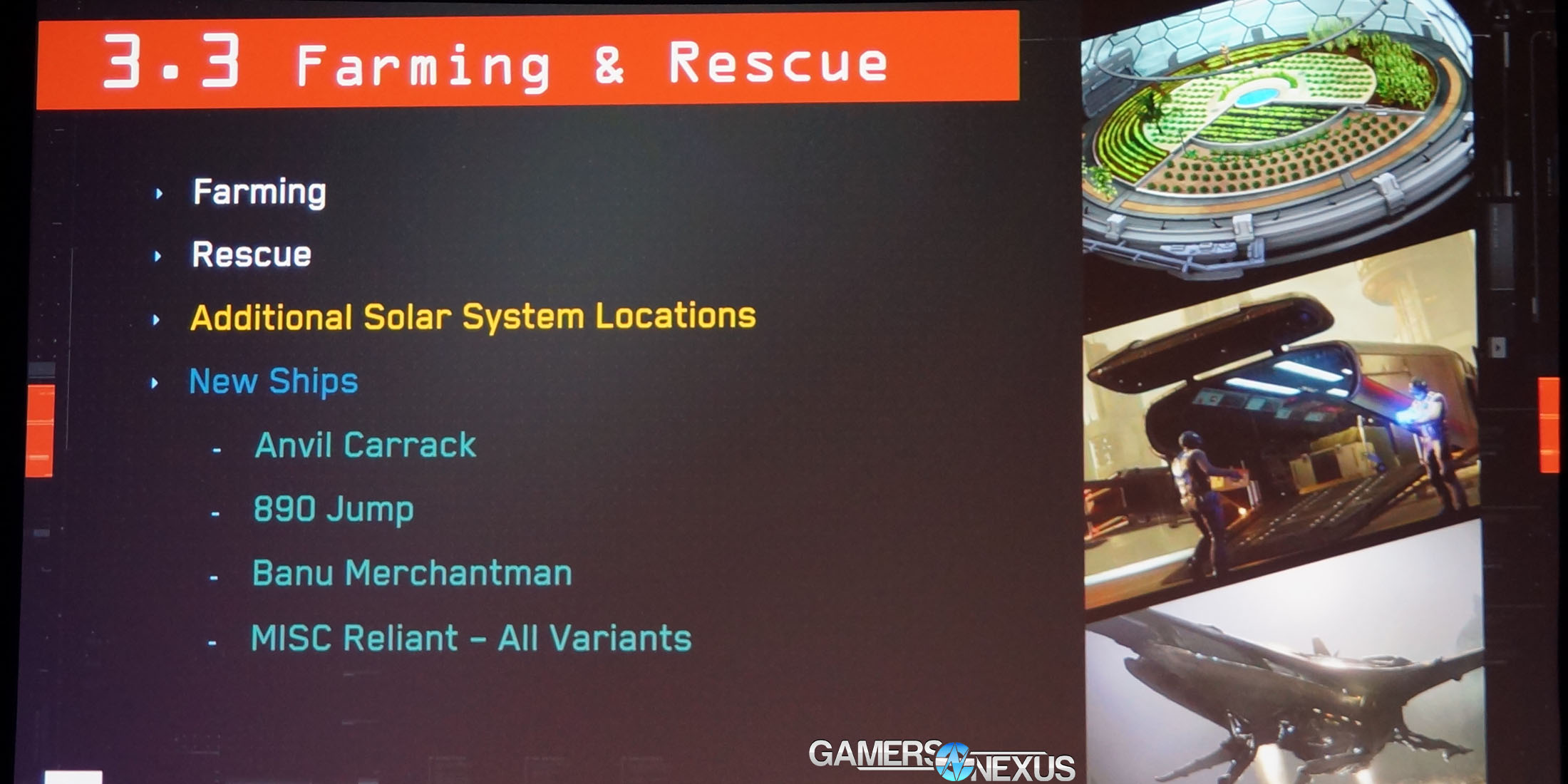 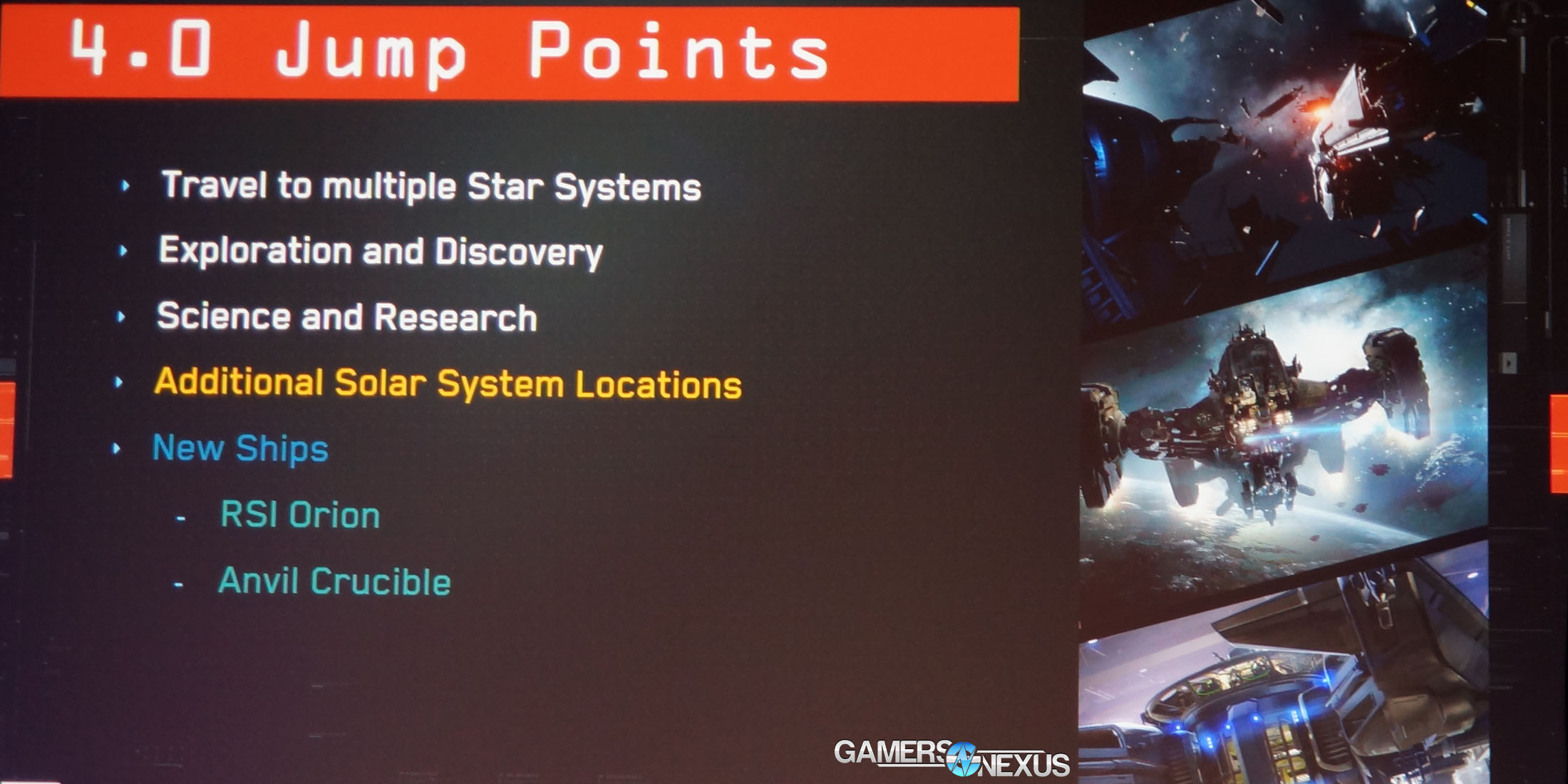 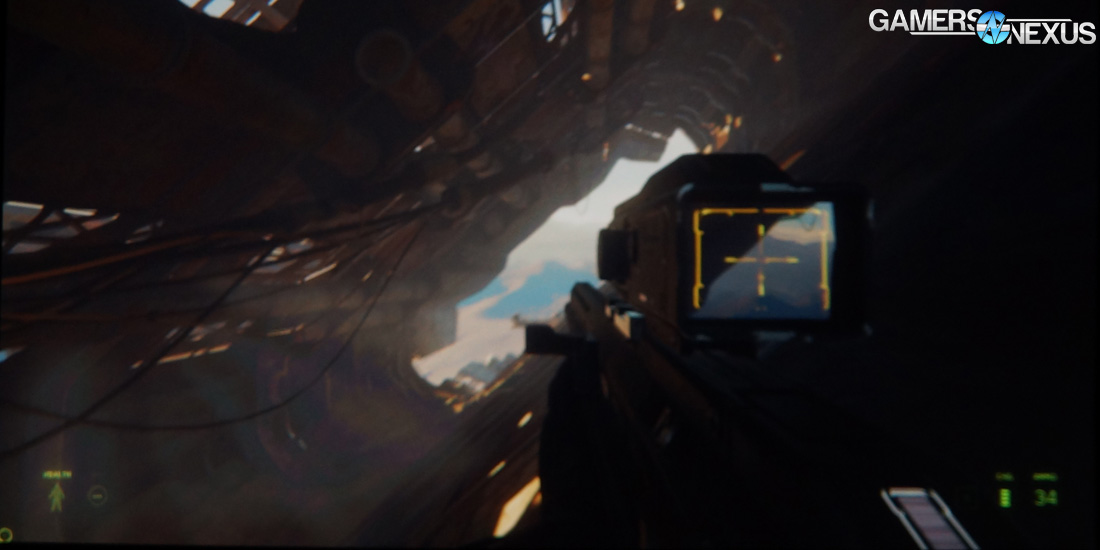 For those who caught our initial interviews teasing a “Homestead” demo, you may remember that the intention was to create an earth-like planet with varied terrain, inhabitants, small homesteads, and biomes.

The biomes are the major point of discussion, and one which we've already heavily detailed in our set of four interviews (as above). Using edge blending, the CIG team avoids using a magic number / seed generator to build its planets, and instead uses large rulesets which blend between differing biome types. A forest adjacent to a desert, as an easy example, would slowly blend into grass, then sparse trees, then the forest. Other rules from surrounding biomes are also taken into account, and some rules are culled or have their effects lessened to (theoretically) create more unique environments. Using this approach, the team hopes to bypass the copy-paste feeling associated with recognizing common terrain or procedural generation assets. Not every rule is taken from every biome.

But plants also see some randomized rotation or tweaking to fit the locale, meaning that it shouldn't be too obvious which tree and plant assets are re-used. Small tweaks go a long way to lessening the visible tiling of a planet, and that's of paramount importance for a game which scales from orbital to planet-side perspectives.

The demonstration showcased a “100% live, in-engine” presentation of the new planet technology. An FPS counter was tucked away into the corner, showing a frame-rate exceeding 100FPS (at times), with dips down to ~96FPS. A single drop to ~75FPS hit when a Constellation ship entered the scene at a higher LOD. Nothing unexpected for an in-dev game.

It looks as if the second number (from our distant vantage point) showed the ms between frame count, or frametimes, with an average in the range of ~8-10ms. On a 60-120Hz display, this effectively eliminates tearing. We're not sure what sort of hardware the demo system was running, but that gives us an introductory look at performance on what is presumably a high-end machine. We'll look more into that post-event.

The planetary demo had a few frame drops and minor shadow artifacting, but overall was fluid in its execution and fly-by demo of a Constellation over the planet. Environment object pop-in and asset loading was quick and at relatively far view distances.

The Constellation eventually landed, with its pilot disembarking onto the planet (after changing out of a flight suit and into armor, with a quick visit and E-key tap at a locker). Our pilot hopped into a rover to explore the planet's surface. Most impressively, real-time physics impacted axle movement as the rover interacted with off-camber surfaces and hilly terrain, with wheels on either side of the vehicle actuating pursuant to the surface underneath. This has certainly been done before in games, but it's still a technical feat and deserves recognition.

The rover is eventually compromised in an ambush, its wheels blown off, and the pilot is beset upon by sand people (see: Star Wars) for a quick combat, invigorated by a dynamic music system that crescendos the battle theme.

A few minutes later, our pilot scoped up to the sky to reveal a space station that was originally seen on descent to the planet's surface. All the way down to the station's rotating rings, the object was depicted accurately and in real-time, and isn't just a skybox. Oh, and as a quick aside, there was also a Sandwurm.

A few visual cues are still missing, like particle effects or impact decals when the vehicle hops dunes, but the demonstration marks the most impressive we've yet seen in Star Citizen's history.

We are still at the event at the time of this writing, but we will be speaking with CIG members immediately after. Check our YouTube channel for those interviews as they publish, or follow us on Twitter for more. As always, if you like this coverage, please consider supporting us on Patreon. 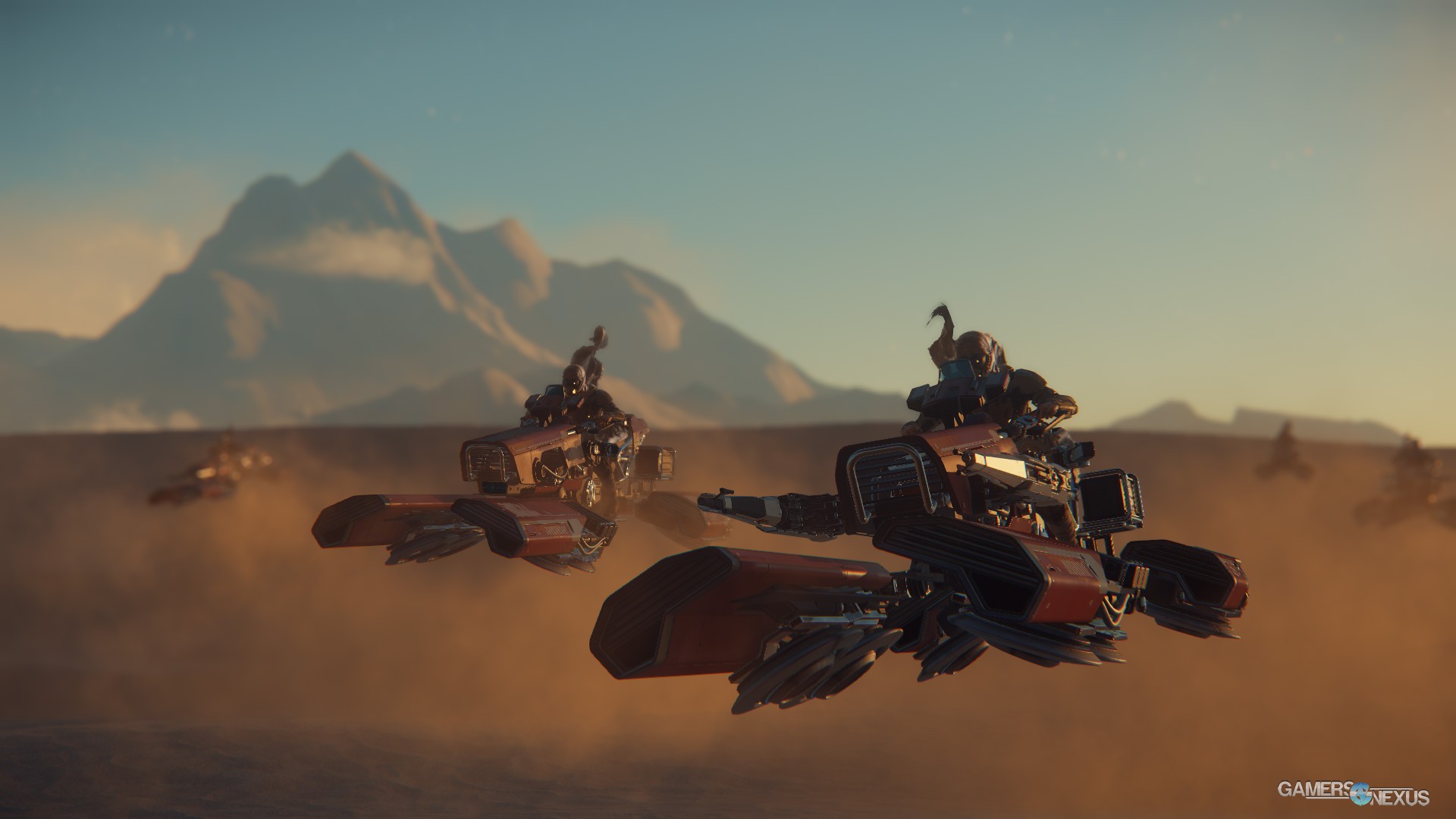 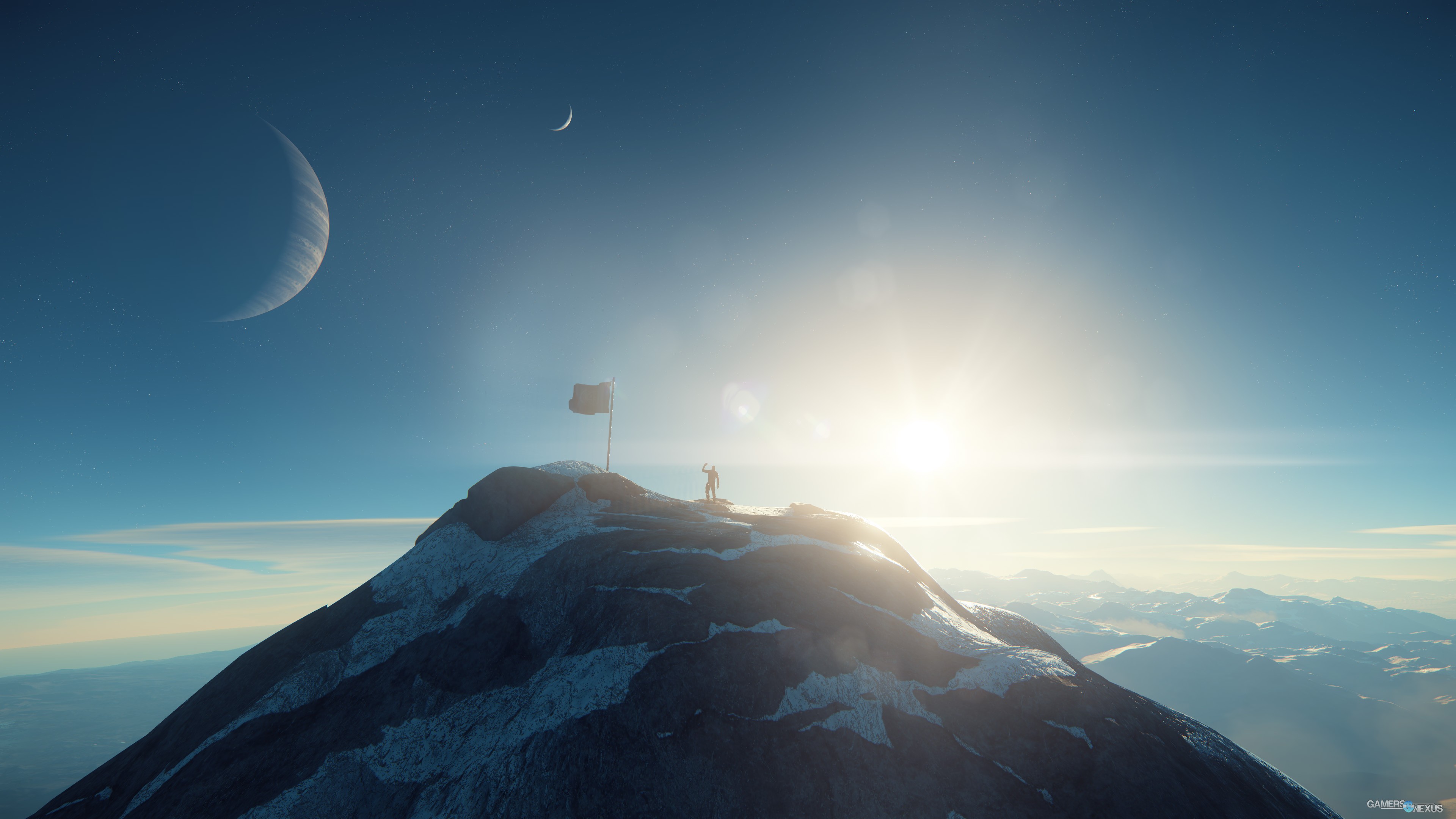 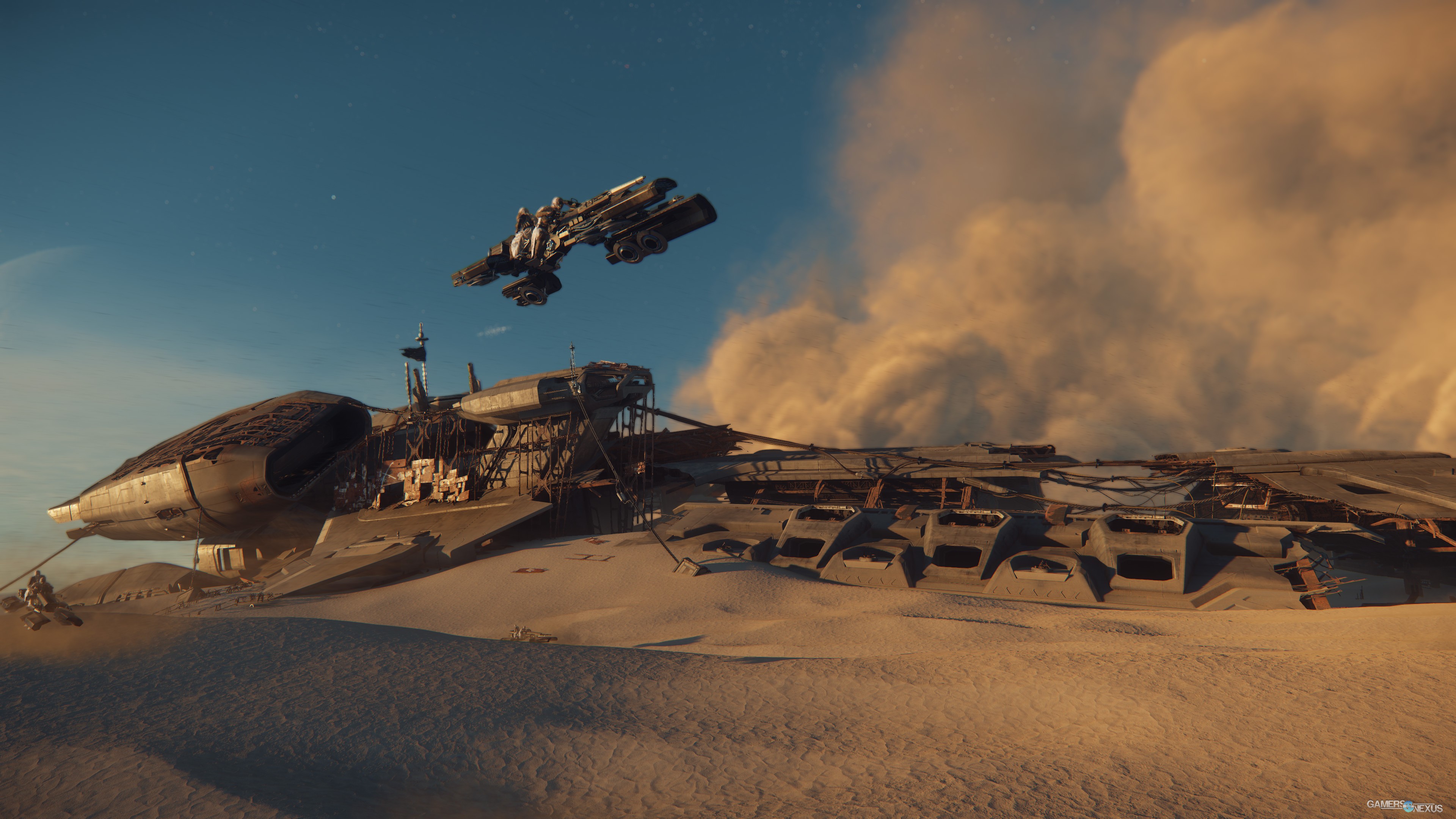 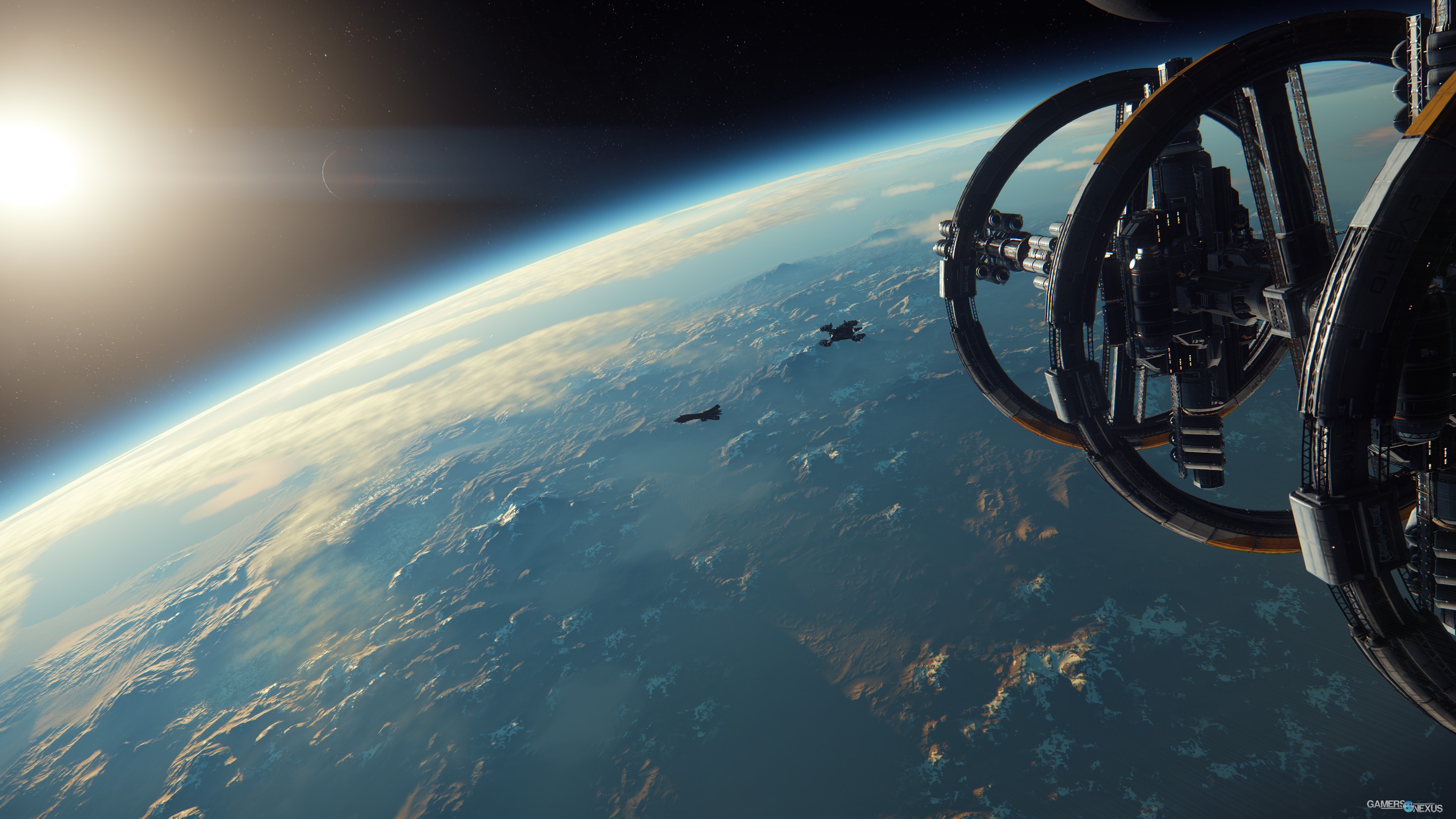