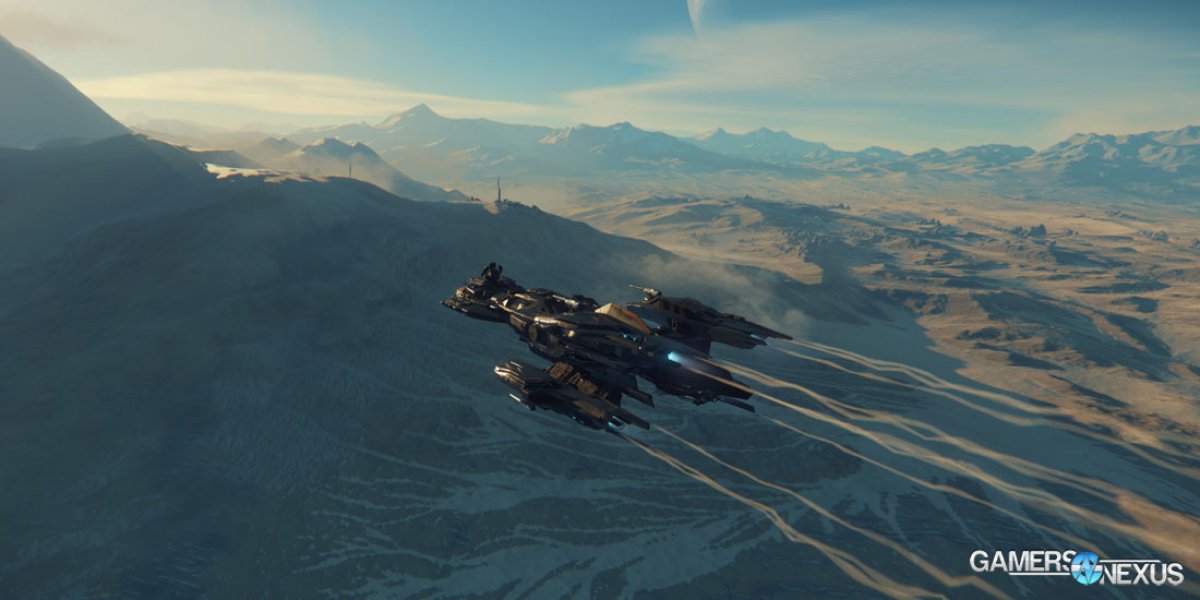 We started the interview by asking Roberts (Erin, not Chris) what the task delegation was like between the various studios, particularly to create the demo shown at CitizenCon. The UK studio head told us that only a small portion of the team was pulled to work on this demonstration, leaving the rest of the core team to develop Squadron 42. That smaller CitizenCon group put together the Planets V2 Homestead demo in the time since GamesCom, hosted in mid-August, totaling a couple of weeks of development time.

Of this process, Roberts said:

"A lot of the tech from the demo came from the German office, in terms of the actual procedural planetary tech. [...] These guys did a lot of tech. They worked very heavily with the environment artists, and there's one or two in the German office, but a lot of the environment artists are in the UK office. The UK and German offices are very close; in fact, they're both Foundry 42 as one sort of studio, so they work very closely. Between the two offices, we spent a lot of time putting that stuff together.

"We showed in GamesCom what we called v1 of [procedural planets], but we wanted to go a step further with the v2 stuff and actually start creating levels that are almost like a Crysis level, which you see on the ground on a 2km squared map. We want to do that on a planetary scale, and from a planetary scale we want to go to a system-wide scale, and from a system-wide scale to a galaxy scale. It's about creating that technology. A lot of the work that we put in today is literally – we didn't have any of that at GamesCom, this is all stuff we were working on. And it's just about – what? 4-8 weeks since then? And that's a testament to the technology of what we can do. That's because a lot of the time we spent on the technology over the last 18 months, we were building all of this kind of stuff up. We've talked about it – 64-bit, all that kind of stuff, we had to get all that basis in there.

"Actually, [it was put together] with not a large team, because a lot of the focus has been on Squadron 42. We're still working through, and obviously we're going to show a lot of that stuff later. We just wanted to show what we could do with new technology. It's just the start of it, because even the environments we have now, it's just a bit of R&D work from five or six environment artists just working on how we can make stuff look. So, we know when we're really into the production pipeline and making these planets and so forth, we can just [start making] amazing planets."

The production pipeline should be entering full swing shortly, CitizenCon now behind the team, and that means heavy focus on finishing Squadron 42 for the UK office. We also asked about challenges faced by the team during development, to which Roberts replied:

"A lot of the blending [was a challenge]. You've got a scale of – a lot of the memory restrictions, and basically the streaming side of [things], because you have to have the memory to do that. And also, you have to blend between different biomes, like you said. So you're going from desert to water, from water to savannah, or jungle, or whatever. We spent a bit of time, and like I said, a lot of this stuff has actually come on a lot quicker than we thought in terms of that level.

“Then you've got the tech guys, we have artists working, so you have these levels of some days, people go, 'oh, you know, we're working on this.' And then they say, 'oh, come look at this,' 3 days later. And you just see something and you go, 'wow!' when they actually put this stuff together. It's not just about the environment tech, it's about the whole environment. The way the sun reacts, so you can see when the sun goes low, it goes red, and all that kind of stuff. I mean, Sean said in the [demo], 'we kind of get that for free,' which is a bit unfair, because there's a lot of tech work behind it.

“But then we have cloud layers coming on, and even the clouds we have now are nowhere near what we will have, where we want a lot more substance. We're going to have weather systems, already we're working on actual procedural ways to have different weather systems and things which affect them. So when you're going on a planet, one day you might go down to do something, next day you go to that location [and] it's very dangerous because of the weather pattern coming through."

Check out the video embedded above for the rest of the interview. We've also uploaded the Homestead demo here, for folks who missed it.