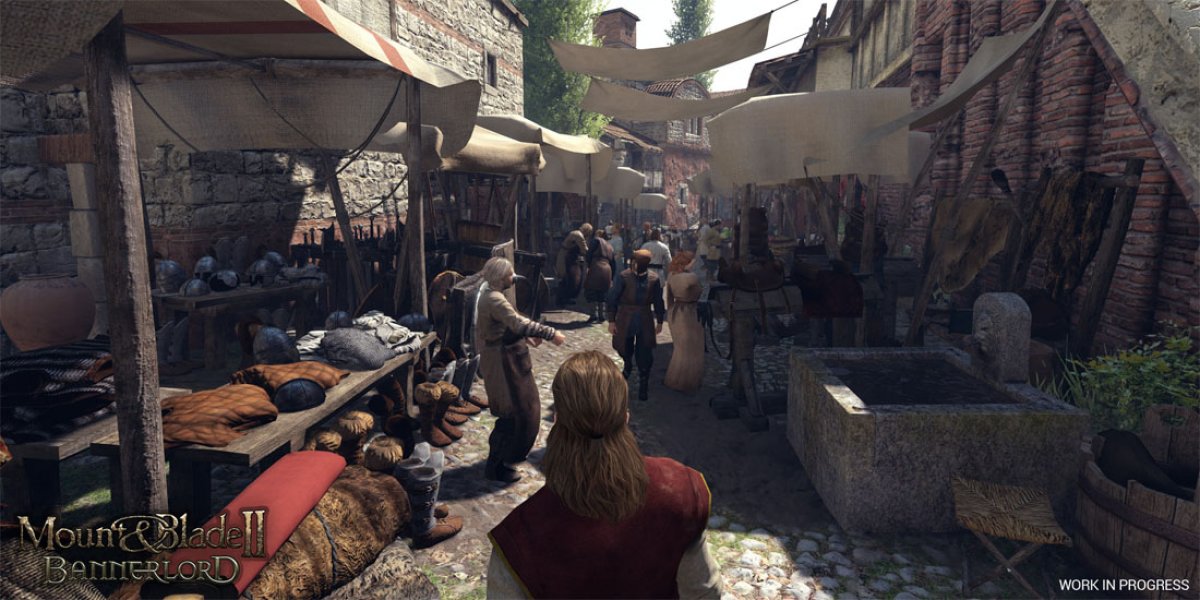 Lore has never been a vital part of M&B (Warband completely redesigned the map to include a whole new faction), but the gist of Bannerlord’s storyline is that the old Calradic (i.e. Roman) Empire has fractured into the states which will become Warband’s factions 200 years down the line. What this means in practical terms is that Bannerlord is a hodgepodge of Dark Ages cultures circa 600-1100AD, rather than Warband’s hodgepodge of Middle Ages cultures circa 1200AD. The planned major factions are the Calradic Empire (Western, Northern, and Southern), Sturgians, Aseria, Khuzaits, Battanians, and Vlandians, each with a unique flavor and subdivided into clans. As in Warband, none of these factions are strictly historical, but are based on real-life counterparts (the Battanians are Celtic, for instance). The campaign map will correspond roughly with Warband’s, but is three times larger and with more mountains.

In the past, Mount & Blade has relied heavily on its players to create their own story: battles, hand-to-hand combat, and empire building form a solid foundation, but scripted quests and interactions with AI are as stiff and awkward as they are scarce. According to an interview with RPS, one of TaleWorlds’ main goals has been to deepen diplomacy and interactions in general. Fire & Sword is the only Mount & Blade title so far that’s made an attempt at major quests (with not-so-impressive results), but Bannerlord will include its own main storyline to add depth to the factions.

The visual appearance of previous M&B titles could be charitably described as quaint, even for their time. Bannerlord gameplay footage has already shown enormous improvement, and not just in textures—animations are a good deal less uncanny valley-ish than before. A new engine developed in-house allows much deeper character customization, including asymmetry, and facial animations finally exist. The campaign map is slowly covered with snow as seasons change, and shadows move with the sun. Bannerlord still isn’t the prettiest game in the world, but it does look definitively better than the previous games, which have looked more or less the same for the past decade.

The GUI has been improved for many parts of the game, and it’s no longer necessary to actually visit every location in a town to determine who is present and what can be done. Exploring a town on foot will have its own rewards, according to developers.

Players are still able to choose whether to become a vassal of a major faction or carve out their own empire. Player actions gather or lose influence points, which can be spent to persuade lords. In addition to influence points, everything from cheese to prisoners can now be bartered, and the economy now affects NPCs as well. NPCs must balance wages and rations, and defeating a lord in battle will force them to overtax their subjects. NPC lords can now also recruit companions of their own.

A new way to make some quick cash early in the game is crime. Gangs can be found in back alleys and defeated, and companions with the right traits can be installed as the new leaders, at the risk of offending the city’s lord.

Villages now have four slots which can be filled with farms or mines, or optionally a castle. Castles are no longer standalone structures that produce no resources, but are instead just one possible aspect of a settlement. Taxes and militias can be levied from towns as usual. 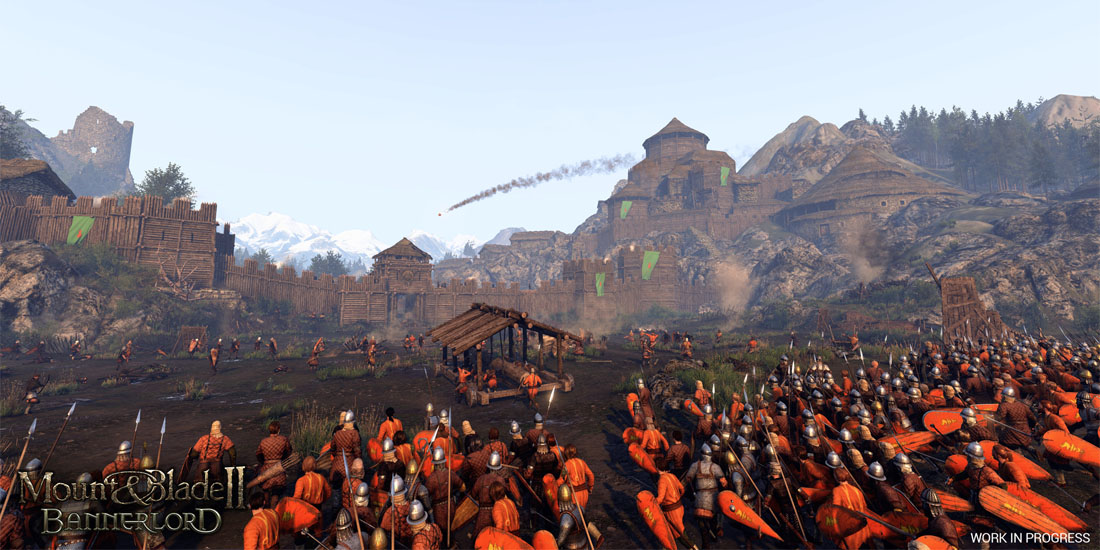 One of the most obvious improvements made over Warband is to increase the size of battles. Warband only allows 150 NPCs to appear at once, so larger armies are forced to spawn in waves as soldiers are killed.  No specific number has been mentioned, but “more” soldiers will be allowed in-game at one time in Bannerlord.

Siege battles have been refined, and siege towers, ladders, and battering rams continue to be present. Catapults and ballistae with flaming ammunition can be used by either side and can be fired by the player (or boulders can be dropped the old fashioned way, by hand). Besieged players have the option to parley with their attackers, or to sally forth and attempt to destroy siege equipment. Troops and siege weapons can be deployed to different locations by both sides before the final battle begins. In the siege battle, siege weapons, battlements, and gates can be destroyed, and walls can be breached via the campaign map (not in battle—it would take too long). Differing wall strengths are taken into account.

AI is intended to be improved, but it hasn’t really been shown off yet. Lords have personality traits which govern their battle strategy rather than charging as soon as they’re able, but footage from the PC Gamer Weekender presentation in March featured a cautious lord who didn’t move much at all. Players will continue to be able to choose whether to command their troops directly or allow them freedom, and now the battle will continue even after the player is knocked unconscious.

The tried and true hand-to-hand combat system will remain mostly the same, with one notable exception: large weapons can now hit multiple enemies in a single swing. Damage is calculated based on actual collision between weapons and enemies, so the new motion capture animations could have some effect on combat. Modular crafting is available for melee weapons, and different elements can be swapped out and scaled for different effects like altered balance.

TaleWorlds will be releasing their level editing tools and working to make modding as convenient as possible. They’ve adopted multiple community-developed Warband mods as official DLC in the past, and it’s a safe bet that they’ll continue to do so with Bannerlord.

A replay system is built into the game and saves both single and multiplayer battles. These can be customized and explored from different angles, and then exported as a video.

There’s been a lot of speculation by fans over the existence of a cooperative campaign, but TaleWorlds have been very quiet about any multiplayer aspects of Bannerlord.

Hopefully Bannerlord will come out sometime in 2017, but it’s probably going to be a while. TaleWorlds have stated multiple times that they intend to offer either an early access version or an open beta before the official release of the game, and neither one has appeared yet, despite promising progress at E3 and Gamescom. The team has been busy lately with porting Warband to consoles and implementing a new multiplayer gamemode, so be on the lookout for news in the immediate future.