GG: The Formula of Hype

The picture you are looking at (left) represents a leading contributor to Crytek's marketing expenses. If you are anywhere near the E3 convention center, you don't need us to tell you that the Crysis 2 poster spans 1/3 the height of the entire structure. That's one high-res render.

The streets of New York have been susceptible to Crytek's teaser trailers, Crysis 2's beta has been in discussion, and now we have posters the size of a house. Or two. All eyes have certainly turned to Crytek, a familiar feeling to the launch of the original Crysis, but will the sequel stand as more than just an over-used benchmarking tool?

I have my doubts. More importantly, what can we learn about industry hype through games like Crysis and Spore?

The gaming industry is oversaturated with bug-eyed marketing reps and executives - be they from actual game companies or other technology foundations (I'm looking at you, Alienware) - they're all-too-excited to start benching, advertising, and (LAN) partying with Crysis 2. It's a remarkable eye-catcher, and unarguably gets the attention of overclocking and modding enthusiasts. The predecessor was a tool with an easily excitable audience, yet had game design equivalent to Counter-Strike's early days. Crysis was said to have the best graphics, and it did. All video cards yielded to the game, almost out of fear. Even the ones that could handle it flew the white flag. It was the placebo effect: gaming media was so infatuated with graphics that it had neglected to even consider analyzing gameplay and design, much less story (Aliens AND Koreans?!). Reviews given on a 100-point system saw perfect 100's (CheatCode Central, GameTap, Got Next), something that shouldn't happen until the scientologist overlord Xenu develops a game called Religion Tycoon. Servers were available from any and all providers, and ads with the game's mascot springing from laptop displays were bountiful. It was too much, too fast - the hype left as fast as a nanosuit's sprinting speed. The community was left in shambles.

All inputs accrue an output, and the output of hype is speculation. Gamers have a powerful tool at their fingertips; actually, it's probably under them right now. At the blink of an eye, you could have your Xfire or Steam friendslist open, social networks whirring, forum topics posting, and emails sending. You have the ability to create or hear any rumor and send it to hundreds, if not thousands of target-audience people. People who want to hear these things. Gamers with an inherently piqued interest, all of them likely to repeat the rumor to at least one friend. It's the Telephone Game. That's why speculation and rumors circulating video games are equal parts drive, threat, and disappointment. I will use Will Wright's Spore as an example to explain these three key elements. 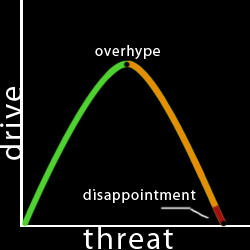 Drive: The initial impact of hype is drive, or the motivation for recipients to immediately commence googling. Trailers of games are a particularly good example, since the majority of video streaming websites offer a 'related videos' panel. Drive can turn any wallflower into an avid fact-checker, leading to overhype, resulting in...

Threat: The enumeration of hype that can derail any launch party. Threat is the diminishing return of drive, and all but killed Spore. After initial release, 'DRM' became the most commonly used phrase across all Spore reviews (source: Amazon). The threat posed to developers is not an easy one to overcome: they have to meet our standards, which, due to hype, gamers are partially responsible for setting themselves. The company is now threatened by consumer backlash if they do not deliver. In Spore's case, Amazon featured over 2,000 one-star reviews bashing DRM, a remarkable blow to any new game. Threat leads up to...

Disappointment: The final phase of hype is the untimely letdown. By this point in the process, all parties are to blame for the disappointment - publishers promoted the game with flowery writing and photoshopped screenshots, developers made promises they could not deliver on, and gamers have unintentionally excited themselves to the point that it endangers their ability to enjoy the game. If hype is allowed to make it this far, future releases of the title may be jeopardized or even canceled. The other possibility is a chance for redemption, such as Spore's Galactic Adventures expansion, which added features as brilliant as the original concept (though its sales paled in comparison to Spore as a result of the original thrashing received on launch day).

A lot of modern games suffer from a syndrome that a friend of the site, ThePerson42, has dubbed "Graphics for the sake of graphics." Large game publishing houses and development studios are investing more than ever into graphics, and it has an adverse effect on gameplay and design. They can't afford to take risks on fundamental design mechanics with so much backing in other departments - the game must succeed to pay those salaries; they seem to stick to the 'better safe than sorry' adage, something I'd like to move away from.

Smaller studios and indie developers, such as those that created Din's Curse and Machinarium are on the opposite end of the spectrum. These are the people that can't afford not to take risks. If they tread in still water, the chance of failure is all too present. It's a very fine balance, and one that I'm betting is best solved with trial and error.

So, the question: Is Crysis 2 a shot at redemption, or is it doomed to follow the same path as its ancestor? Will it fall back into being a pure benchmarking tool, or has gameplay moved into the foreground? A good game should be the topic of conversation for years, but not because of its ability to benchmark gaming rigs. Let us know what you think below.