Nearly thirty years after the dorky, sub-culture debut of Tron, Flynn returns with his crew to the big screen and gaming platforms near you. The hands-on demo at PAX Prime this year proved chaotic and unorganized, but nonetheless entertaining. By the way, our favorite PAX titles can be found here!

The line extending from Disney's booth coiled within itself, easily a one hour wait for half the play time. Towering "TRON" letters flanked either side of the booth, glowing ominously from the blue-white backlighting; a slick lightcycle (below) remained the subjects of photography all weekend, and even the game controllers had special Tron lettering. Disney ranks as a world-leader in entertainment and presentation - they spend lots of money and spruce up the exterior, and hopefully do not neglect the content within. Notorious for games that are either too hard, too repetitive, or just lame, the publisher already had its back up against the shiny, glowing Tron wall.

My skepticism trumped any attempts at seducing me with LEDs; I've been gaming for a long time, and some of my earliest NES memories are from horrible Disney-movie titles. Assistant Producer Patrick Shelly was present to answer my questions.

Gamers Nexus: The first question is an obvious one. I'd assume Tron is parallel to the upcoming movie, right?

Patrick Shelly: Actually, no. We're trying to move away from that. The game is set in a completely different timeline, with its own story, enemies, and main character. We don't want people to go spend $10 on a movie, then spend $60 to see the movie again.

GN: That's a pretty short development cycle. What was the team size?

PS: The team is thirty-some people, plus some outsourced work. You're right - it is a very short time to develop a full game.

GN: How do you respond to Disney games often being underdeveloped?

GN: What about mod support? Will there be any expected support for PC modders? What's your distribution channel for the PC?

PS: The game will probably be pretty closed off. We're using Games for Windows Live for the achievement system, so it is unlikely there will be any modding.

GN: Will you be using Steam?

PS: We have not announced any partnership with Steam.

GN: For a game with such a short development time, will you have any open or closed beta testing?

PS: We will not have any beta, all testing will be done by Disney or its partners. Do you want to try the game?

I opted to play the Xbox 360 version, although the game is also releasing on every major platform (the PC version will be a port from either the Xbox or PS3 version). With controller in hand, I quickly discovered a heavy Mirror's Edge influence. Lots of free-running, acrobatics, dodging obstacles, puzzles, and some overly dramatic fight sequences. I ducked and weaved my way through a throng of lazers, each threatening to de-rez (that's kill) me on contact. Luckily, the level on display for PAX transitioned between all major elements of the game in rapid succession, preventing individualized boredom with challenges. I was forced to watch about 30 - 45 seconds of tutorial videos prior to my first fight, and then unleashed upon my 'program' enemies. Hurling the disc with top-notch precision, flipping off of the face of an enemy, and tumbling underneath their attacks flowed wonderfully, even for a novice console player. With opponents beginning to focus-fire me, I leapt for a ledge to recover some health. Instantly I was stopped in place. My adversaries continued destroying me while paralyzed, and when I looked to Patrick for advice, he merely shook his head and smiled: "That's not supposed to happen." I asked him if I had been hit with some sort of stun, "No, I haven't seen this bug before. Strange." We reset the game, this time hoping for a less glitchy result. 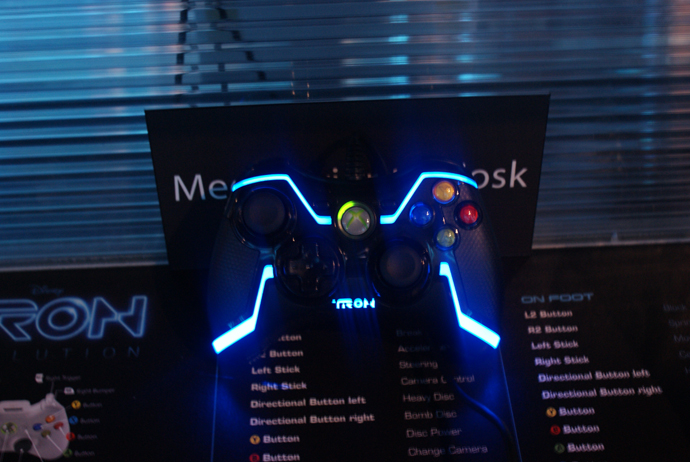 Painstakingly, I sat through every cinematic and tutorial a second time, completed the easy part of the level, and worked my way back to the location of the glitch. This time I didn't try anything fancy - no need to break things, right? Whipping out my disc and getting into a combat-ready stance, an epic fight would be soon be underway. Unless, of course, the screen goes black... which it did. Two Disney representatives starting moving between the media kiosks, "Why did the power just go out? What happened?" Patrick frowned, visibly embarrassed. We rebooted the game a third time, and noting my overt enervation toward the agonizing, unskippable cut-scenes, he instead chose the 'lightcycle' mode. For those that are unfamiliar with the Tron 'verse, lightcycles are motorcycles that leave a trail of light in their wake, and any collision with the light results in the obliteration of the colliding object. It's like playing the old Snake game, only with more explosions.

The fast-paced action re-captured my attention as I took on a strategic race through an imploding environment. Equipped again with my trusty Tron Frisbee, I took to the streets in a heroic battle for virtual life. Walls and buildings went up in blue flames, dematerializing in a grid-like pattern as I raced. The road started vanishing, leaving me to my doom should I fall behind the level's inherent dangers. Racing lightcycles was easily the most entertaining few minutes out of my time at the Disney booth. Regrettably, due to the glitch and power outage, I ran out of time and had to run to the next interview. I left feeling entirely underwhelmed; these things happen, but limited development time and a disregard for open/closed beta only amplified the connotations of what had occurred during my brief demo. In my first five minutes I had broken the game, and immediately foresaw the impending 'no replayability' slams from reviewers worldwide - watching cinematics over, and over, and over is not fun, and makes it impossible to pick the game up for a few minutes. Disney sticks to their guns, for better or worse, and continues to produce the same quality games we've seen for years now. The gameplay is brilliantly designed for action, but the track history of glitches within movie-based games, coupled with the one I found in Tron: Evolution, leaves me weary at best.