Level Design: From Lyrics to Levels 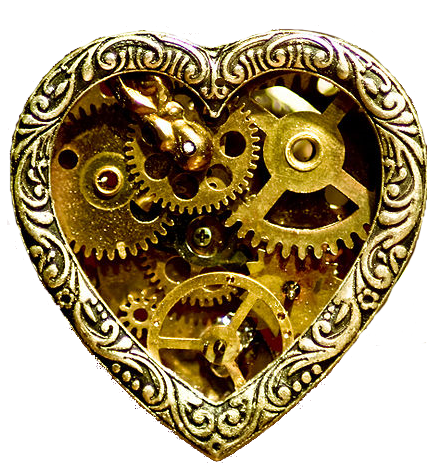 Level design is akin to writing: eventually, the creative flow of ideas is impeded by some form of 'block' (level designers block, perhaps?). I've done a lot of level design for video games (Majesty 2, Mount & Blade) and tabletop games, and I recently came across a unique idea for planning out a steampunk-based dungeon. Bear with me here - I will be designing this dungeon through use of lyrics in a song; yes, that means lines will be metamorphosed into rooms (or elements) of the dungeon. This trick can be applied to video games and tabletop gaming, and I've tried to make the dungeon described below as neutral as possible. For sake of knowing, I designed this dungeon with Savage Worlds (a Dungeons & Dragons-esque tabletop rules system) in mind.

I realized the lyrics in the song "Re-Education (Through Labor)" by Rise Against had fantastic lyrics for a steampunk or skeletal dungeon. Since skeletons and undead are overdone in level design, we're going to opt for something steampunk-driven. It's more fun, anyway. This trick won't work for every song (you might have trouble converting Bieber or Beyonce to dungeon-crawling), but a lot of rock and punk songs should be convertible. First: Let's take the lyrics and begin siphoning ideas from them.

To the sound of a heartbeat pounding away

1. The first room of the dungeon will be a cursed, illusory room - probably a standard 20x30. The "heartbeat pounding away" embodies itself in an illusion - a cursed dwarf - who eternally hammers away at a forge in the center of the room. He pays no attention to entrants, and continues to hammer out cogs and wheels. His hammer connects with steel in heartbeat-like intervals. There is a door at the far side of the room, tucked away behind the large forge. The cursed dwarf dwells in another plane of existence, but is displayed here by illusion magic. Listening at the door (or standing in close proximity) will reveal what sounds like a soft whirring noise, and harsh clanking sounds.

To the rhythm of the awful rusted machine

2. The second room is a very long corridor, which feels endless at first. The entire thing is a behemoth machine - the ceiling is adorned with gears and cogs, each intertwined and turning. The sides of the room have scoops and conveyer belts entering from other nearby rooms; these conveyer belts carry pieces to build clockwork warriors (sword-arm attachments, metal limbs, etc.). Every ten seconds or so, a whistle goes off, signaling the release of steam through a bronze pipe system (which goes through the ceiling). Some of the steam escapes the pipes and enters the room, but is purely aesthetic. At the far end of the room is a massive pair of double-doors, currently grinding against one another in failed attempt to open. The 'clank' is a pair of cogs in the room that are not connecting, and keep slipping gears; this causes the doors to malfunction, preventing the progression of the converging conveyer belts. If the adventurer(s) find a creative way to repair this - probably hidden within the room (maybe a replacement cog?) - the doors will open to reveal...

We toss and turn but don't sleep

3. The conveyer belt continues straight down the center of this room. On either side of the belt can be found three clockwork gnomes, each piecing together what looks like mechanized spiders. The gnomes are made of bronze plating, and have exposed cogs in between the plated bronze. Their eyes are aglow with green emeralds (which can be "salvaged" by greedy characters). The gnomes' right arms are fashioned into hands that double as both a hammer and a pick, and will simultaneously turn to face the intruders. At the end of the room (also the end of the conveyer belt) is a deep pit, filled with the "unworthy" or otherwise broken spiders. This pit dumps into a great furnace every hour, effectively melting down the pieces to be remade. The "good" spiders are put on a belt that gradually inclines to the height of the ceiling, then follows along the top of the wall in each room hereafter (making the belt 'out of the way').

[skipping rooms to shorten this, I might release a full PDF of the adventure at some point.] 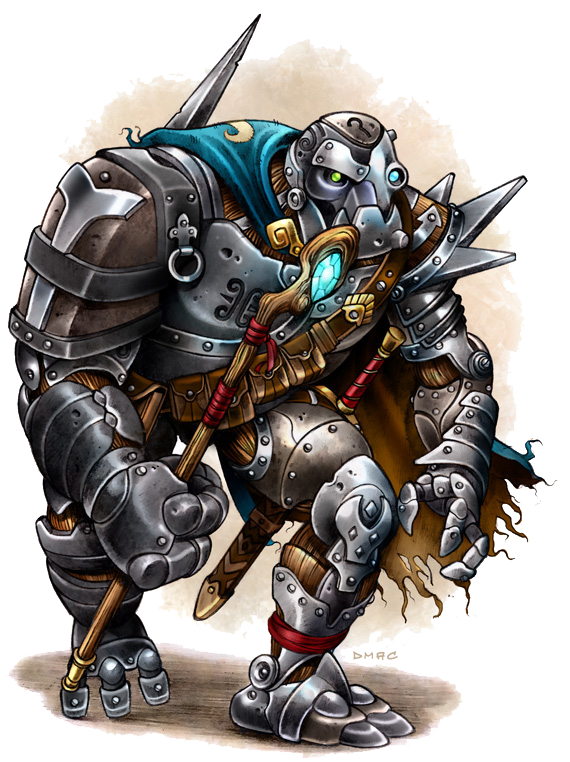 8. This room is pitch-black, and due to its build, torches have half the effect of a normal torch. The room is eroded by natural water (long since gone), and is more the shape of a cave than a dungeon room - there are no distinct dimensions. There are cracks along the ceiling and walls, sort of like miniature chasms, and could easily be the location of hidden coin purses or objects. At the opposite end of the room is an alter powered by a coal furnace, and has gears turning on the back-side of it; these gears power a music box, which activates upon entrance to the room. A Warforged warrior kneels in front of the alter, presumably praying; he seems to emit an aura of awareness (as opposed to previously encountered constructs). He knows that the player(s) have entered, and presses a concealed button on the underside of the alter. This causes the spiders (to which we have alluded previously) to emerge from the cracks in the ceiling and walls. The clockwork spiders will slowly overrun the players, only stopping when the Warforged is slain.

You could do a lot with this particular song, but for sake of shortness, it has been whittled down to these few rooms. Take the idea and apply it to songs you like - hopefully you'll get some creative level design out of it! Do you have any unique tactics when designing levels? What kind of stuff inspires your creative side?