To appropriately evoke the feeling of openness within our world, even if it is railroaded (linear) in gameplay, we must first define what creates an open world. Here's my definition:

Openness within an RPG world is the feeling that a player can stop and start main quests whenever he sees fit, venture deep into the woods, stray from the path of the storyline, and otherwise create a gaming experience entirely unique to that player. A feeling of vastness or randomness is required to break any linear undertones (such as gameplay mechanics restrictions or story railroading, a la Dragon Age). Openness can be broken into the following three requirements:

- Freedom of movement on all axes within a vast, or seemingly vast, world.
- The option to abandon primary objectives and pursue other tasks (maybe even player-created).
- A definitive additive property possessed by the player, such as the function to claim 'houses' (mechanically permitted or not), create environs, destroy denizens of towns (even the good guys), hiring or recruiting NPCs, or other similar leadership skills.

RPGs with no walls

We're going to design the framework of an open world using these guidelines over a series of articles, currently an undetermined amount, but we'll lay the foundation here. Let's start with my first bullet point above: freedom of movement within a (seemingly) vast world. In Divinity II - The Dragon Knight Saga, the general choice of direction, duration of time spent in a location, varied terrain details - such as cliffs, rivers, caves, prairies, et al - is all typically at the player's disposal. If I wanted to manually scale the mountain instead of turning into dragon form and flying up it, I could try and do that. Despite its glitches, DKS nailed the freedom that we love in open RPGs. Drawing from my play time in DKS, the best way to create a false sense restrictionless movement is to play with terrain details: in a tabletop RPG, telling the players "you walk through a jungle for several days" - although to-the-point - is much less evocative and expansive in opposition to giving them a series of challenging terrain types. Populate your land with hills, mountains, forests, rivers, caves, and whatever else feels necessary for the environment. Placement of huts and cool buildings broke any small chance of monotony in Oblivion and Morrowind, and using similar tricks, like foot-snares and bridge-top bandits, can create a welcomed feeling of distance from the main quest. That's what all of this is about; in order to truly roam boundlessly, the players will likely want to "get away from it all" after several hours of storyline. Sometimes it's just fun to explore and kill things, after all. That in mind, exploration must be invigorating and spontaneous, hence the random buildings and inhabitants. Particularly adept level designers, like those working on the Divinity series, will cleverly plant abnormal items (talismans, crystal skulls) in dungeons without alluding to their use. If the players are truly experienced adventurers, they might eventually locate the book or talisman accompaniment required to activate such devices, supplying a fun advancement of role-play choices. On the other hand, they might never figure out what it does. It'll sit in inventory until it is either discarded for something more valuable, or until it is pawned off as worthless treasure. In Divinity II, I found more random loot in dungeons than I could count, and after giving myself a fair trial at finding the other half of information, I inevitably searched for guides (or simply gave up). This is not an option in tabletop or budding games, though, so we'll just conveniently ignore the ability of players to help one another. Besides, the true feeling of spelunking is not obtained through web-crawling for completion.

Back to terrain! Your land features should be comprised primarily of exploration opportunities and eye candy, landmarks to remember the way back, and hazards for a bit of mixed hack 'n' slash. Hazards can also be counted as puzzles, cliffs, fires, quicksand, alchemical plants, or traps. In this example I've drafted up rapidly using some mapping software, you can see that in just under thirty minutes, I've created some classic island scenery for the eye candy, added caves and hill-tunnels for spelunking, created a few valleys, and even set up two factions (tribal-like natives and a small garrison of conquistador equivalents). 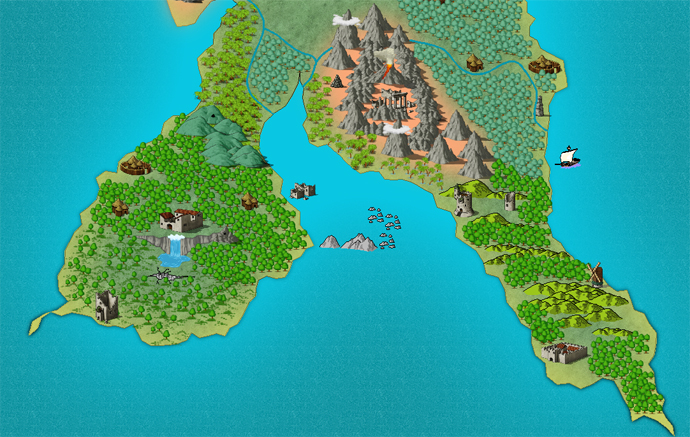 My second requirement was the option to abandon main objectives; continuing with the sample map above, the player could be presented with a series of social sidequests (an opportunity to progress the game's backdrop war between the natives and conquistadors, perhaps - rather than what most games do, which is say 'there's a war' and then forget about it). It adds a false dynanicism to the game without the necessity to program new game mechanics that support a 'true war' between races. We'll say the natives are tribal goblins that have dozens of piercings, bone armor, and some nice, black tattoos. The goblins are forest dwellers and live out of huts, and there are multiple tribes of goblins - however, they have banded together to fight off the conquistador threat. This is another thing Divinity II did fantastically: it often provided the choice between one side or another, or even a third "me, myself, and I" path. In our sample, the player might discover a goblin village in a tense battle with some good ol' Spanish conquistador types. In a split-second, the player must decide whether to get involved, and if so, which side to assist. The mechanics should support that all embattled NPCs are neutral until stricken, at that point the entire faction within this battle will freely attack the player, but not so much that they 'forget' their initial enemies. This could be easily created with a series of triggers and some custom scripting in the TES Construction Set (for Oblivion in particular). In just half of a paragraph, we've managed to create a thriving backstory between these two factions, and it's completely independent of any sort of main quest. Make friends with either the conquistadors, goblins, or kill 'em all, then continue on with your life. Extended benefits will ensure this quest is not simply "just another sidequest" that gets forgotten; obvious benefits might be a trade outpost in the middle of the wilderness with access to rare herbs (goblins), or possibly a place to equip the character with shiny new armor and weapons, and a place to bunker down at night (conquistadors). Granted, there are much more fun things to provide them... 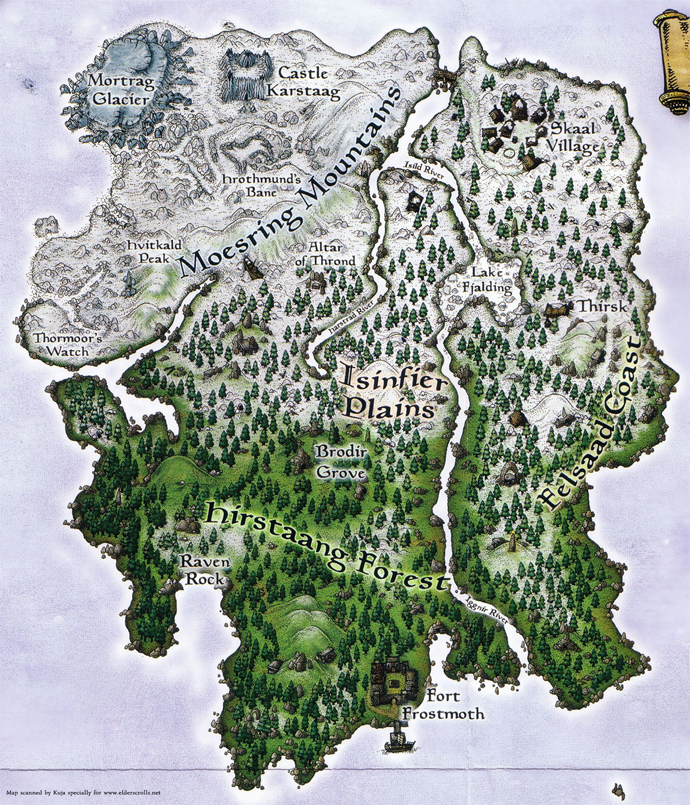 The final element of my previously defined requirements was two-fold: an additive property possessed by the player, and an option to befriend or employ NPCs. Once again, we turn our heads to Morrowind: Bloodmoon, one of my all-time favorite expansion packs. Bloodmoon had a really fun semi-major quest; if the player character took a boat across a channel (or swam, teleported, etc.), he'd find a small fortress with a couple of important NPCs inside of it. One of them, my memory fails me, offered the entrepreneurial quest of leading a construction effort for a new outpost - to be dubbed Raven Rock. You were assigned to task different NPCs with jobs, allow or deny new shop owners to establish themselves in your outpost, and resolve small disputes. In the end, after several days of building (which was actually somewhat dynamic!), you were rewarded with an awesome place to hang out, a potential house of your own, and shop keepers that you personally had allowed to build in your town. It makes sure the player is surrounded with characters that he likes, rather than the jerk you never talk to and the useless general store. When you grant access to a player dwelling, it is almost guaranteed that the player will deck out his house and use it as an outpost to explore this treacherous landscape. All the caves will have loot, and the loot will need somewhere to live - hence the house solution.

Let's say our player sides with the infallible conquistadors. The commander can now offer the player character a job to burn down the remainder of the goblin village and construct an outpost atop the smoldering ruins. Use those stinking goblins as fertilizer while you're at it! The village will be too hard to take solo, though, so you're given charge of a task force of personally selected soldiers. The commander might offer up the choice between a tracker and a field medic, a careless grenadier and a cautious field sergeant, or merely just assign a regiment without a choice to specialize the crew. This now gives the player complete control over his mission, and what's more, afterward they will occupy the new settlement and set up shop. It's a perfect resort for the player to hang out, recruit more fighters, refuel himself, and all that good stuff. A base of operations, in essence.

It was a bit of a long one, but if you made it all the way through the article (and likely found a few typos!), please leave your comment below. It's open to guest commenting, too. I want to know what you want to read more about in the continuation of this feature. Do you want me to focus more on the actual creation process? Did you like the history lessons I embedded from other games? Do you want a world creation template? Now that we have a framework of understanding, the writing can go almost anywhere. Let me know so we can start building your world!