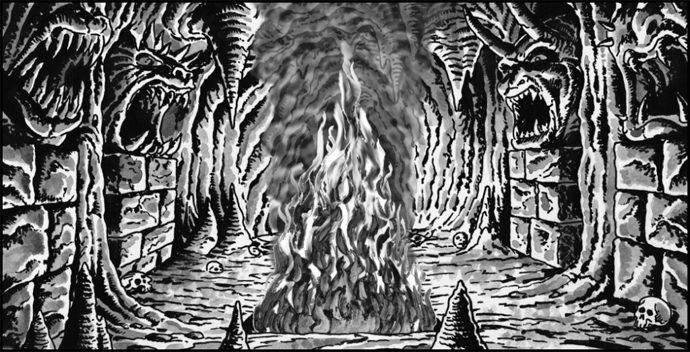 Gary Gygax's name may unearth your well-founded fears of the omnipotent super-being, the creator of all RPGs as we know them, but he is not the only one who can do it. It is true, though - our favored designers are the exalted pinnacle of fluidity and quality control, and the fact that a single name can evoke emotions so humbling is baffling. Gygax indeed set the standard for us today, whether you're a tabletop gamer or not, and his work has inspired this article (but don't worry, I've written it to be game-neutral; it will work for video games and tabletop games). Despite our gaming subculture's undying worship of amazing designers and developers, we could never, ever imagine the level of fascination that our ancient ancestors must have felt when in the presence of their gods. Egyptian mythology chronicles the existence of more than two thousand gods (although around one hundred are commonly known), the Aztecs lived under the ever-watchful eye of almost one thousand gods, and dozens of nations world-wide have had similar ancestry. With millennia upon millennia of storytelling behind each of these civilizations, there's an endless amount of applications to modern gaming. Yes, even our beloved Gygax (may he rest in peace) came nowhere close to the amount of history imbued in ancient societies. It's common practice to borrow from the ancient ones, so let's take a look at how to pick and choose myths for your own adventure.

To avoid accusations from your players of unoriginality, it's best to mix and match subsets of several myths from multiple civilizations. Each civilization had a few key archetypes that make them immediately identifiable to the seasoned roleplayer: architecture, deity variation, heroes and kings, monsters, and mysticism (or 'magic'). Here's a short list of some of the more game-worthy peoples from our past:

Note that prophecy is a commonality between all cultures, whether it is the end of days or the oracles of Rome, they all have it.

In classic fantasy RPGs we often steal heavily from two cultures: the Vikings and the Greco-Roman world. Viking mythology can be found in games like StarCraft (Yggdrasill the Overlord is a nod to the Viking world tree), but any references to Asgard, Ragnarok, and even Elves and Dark Elves are all potentially tied to Norse mythology. It's getting old. Seriously, stop.

I recently ran a game of Savage Worlds, a tabletop role-playing game, and was struck with the same dilemma that most of you are likely considering: how do I make use of ancient cultures without being obvious? I ended up combining Aztec blood rituals -- down to the racks upon racks of skulls found by the Conquistadors -- with Ancient Egyptian tombs and secret panels. I then added in a splash of hieroglyphs (some more obvious in meaning than others) depicting the process by which the dead continue to the afterlife; after that, I tweaked some of the standard mythological beasts found more commonly in Greek writings to fit with the theme -- a mummified minotaur, a basilisk guardian, hellhounds guarding a demon-god's lake of perpetual flame, and so on. Pure combat is boring for my party, so I knew that puzzles and traps would be an inevitable desire; I drew from the modern interpretation of Egyptian death traps (pendulous axes, walls filled with dart launchers, the works) and added it to object-oriented puzzles (perhaps detailed in a future article).

The end result was a flourishing crypt filled with wondrous encounters and references to all kinds of cultures. It's important to make some references obvious, like my hieroglyphic text, because you want to ensure the players can produce their own mental imagery of the adventure. It's much easier to let immersion take hold when the player can subconsciously connect a monster with an adapted minotaur, allowing them to focus less on reason and more on fantasy: if you show a player a brand new, totally unique monster, they're more likely to stop thinking in context of the game and start trying to produce a logical correlation between this beast and something they've encountered before. We like to draw connections between events, and if drawing that connection for the gamer is an option, then it reduces risk of potential immersion killers.

I'm currently attempting to put this article into a web application format -- a generator of individualized mythology, sort of. But for now, take these categories and fill them out for your race:

Picking a theme for each question and sticking to it will also help to increase immersion, and it will give players a way to remember "that dungeon on the island." What do you think? Have you ever done anything like this? What's your favorite branch of mythology? The upcoming Skyrim game certainly has its influence on my future plans...