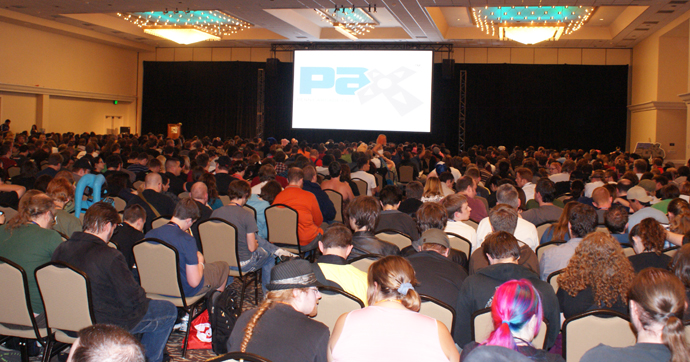 The Holy Land of video gaming culture; nay, the pantheon of characters embraced by cosplayers; nix, the... the... PAX!!!!!!!

Every part of me squirms when recollecting the joys and pains (very physical ones, at that) of PAX Prime last year -- from the resounding echoes of fanatical gamers to the "meh." of defeated Enforcers, everything about PAX is truly original and inspiring. Alright, maybe not everything. The stench-saturated walls on day 3 were not necessarily enticing, but they were certainly... uh, unique. The two PAX events are major gaming conventions -- each has a draw of at least 50,000 attendees, more likely 60,000, and each has its separate influence on the gaming universe. The meaning of gamer is not only explained, it is embodied by PAX and its respective goers; developers unveil their new spawn, gamers collect and collaborate, and speakers give their best to educate and entertain the hardcore enthusiasts present at the event. God speed to them.

PAX East is a chance to reconcile with the gaming gods at the Mount Olympus equivalent of the gaming world (bet you've never heard Boston referred to as that). It enraptures gamers with its amorphous collection of wisdom and entertainment, emitting a euphoric message to all in attendance - both online and in person. The event is entirely unexplainable by even the most adept journalists and creative writers, and best understood in its full glory. It's not quite possible to fathom the event unless you've already attended, and while we won't spoil the significance of a first-hand account, we will put forth our finest effort to dispense the wisdom of veteran convention-goers. Don't end up immobilized at the foot of your hotel room bed on the first night of PAX. It sucks.

This short, somewhat self-deprecating guide will help make sure your PAX (or other con) experience is enjoyed to the fullest potential.

As I've heard many times from numerous hopeful PAX-goers, the "real experience" is something of a coveted prize of conventions. Take it from the one who spent seven hours in airports and on planes to get to PAX Prime: the real experience involves Advil. Lots of it. If your bag of swag-holding magical powers is of the duffel variety, ditch it. Your one shoulder will be so imbalanced by the sheer weight of pure awesome that your swag-swiping abilities will be vastly hindered come the second day. You might actually have to - *gasp* - talk to the people at the booth before you grab everything in sight as if possessed by the spirits of a thousand cheeseburger-craving cats. Bring a backpack, with two straps, and distribute your weight evenly. Just in case, keep some sort of generic painkiller available for when your back inevitably fails. On that note...

Whether it's your first convention or your tenth, the uncontrollable desire to snatch everything from a table -- yes, even the business cards -- is present in all of us. Save room for the unannounced giveaways, often featuring specialized gems like game-specific figurines, shirts, and canvas bags; it's a big event. There's a lot of stuff. The small stuff won't go anywhere fast, but definitely take any opportunities to get items of interest, like food (more on this later), game beta keys, game unlock keys, and more. Likewise, as great as the big items are, don't take more than your fair share. Take one, walk away, and let others get their moment of joy.

Like ravenous zombies at the fresh [meat] market, PAX-goers ensnare the poor, confused employees at convention center food courts in a web of clawing hands and gnawing teeth. I went entire days without food at conventions, living purely off of the energizing atmosphere, but ultimately had to refuel somewhere. Don't be discouraged by the massive lines during lunch hour -- do yourself a favor: leave the convention center, walk a block in any (safe) direction, and go to a restaurant of choice there (note: do not stray from the protection of those wearing PAX badges). There won't be a line, the food will be better, faster, and more enjoyable (and cheaper). 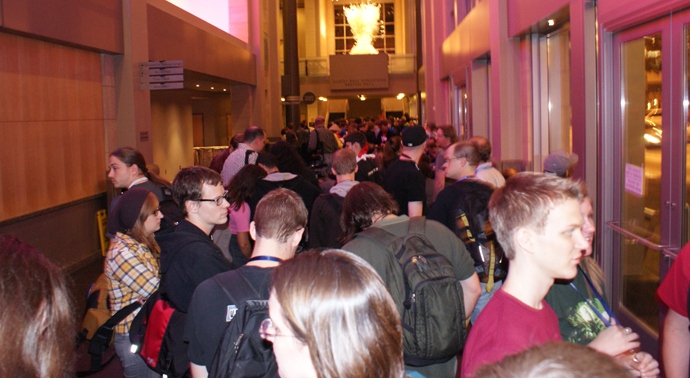 Despite my "No, you can't mark that on my map" rant, it's best to draw all over any maps you can get your hands on for PAX. Pro tip: wandering around at 2AM, lost, in Seattle, after the back-killing concerts, can get scary fast. One wrong turn, and suddenly all the playful costumes and badges disappear, to be replaced by an undesirable location for camera-wearing nerds. Take a few minutes to make note of the 'boundaries' of PAX, look for key hotels, restaurants, and event theaters. The convention attendees almost always utilize Google maps to mark these locations for us, so check out their forums for any relevant maps. Don't forget to print out a simple map of the actual convention center and its subsequent theaters, it's hard to figure out where you are from the ground level (booths often obstruct any view of typical landmarks).

People at PAX are nice, but all the lawful good people in the world won't be able to locate the owner of an unmarked cell phone or notebook. This one's a short tip: get a piece of masking tape, write your phone number or contact info on it, and stick it onto your items for the remainder of the event.

Because of our very nature, PAX organizers typically establish charging locations throughout the exhibition hall (or in the least, go find an outlet). Be sure to bring any chargers for your cell phones, laptops, camera batteries, or handheld devices prior to leaving the hotel (or boarding the plane, for that matter). Don't miss out on photo opportunities, there are lots of fantastic costumes and professionals around, and you'll want to be juiced when you meet one. 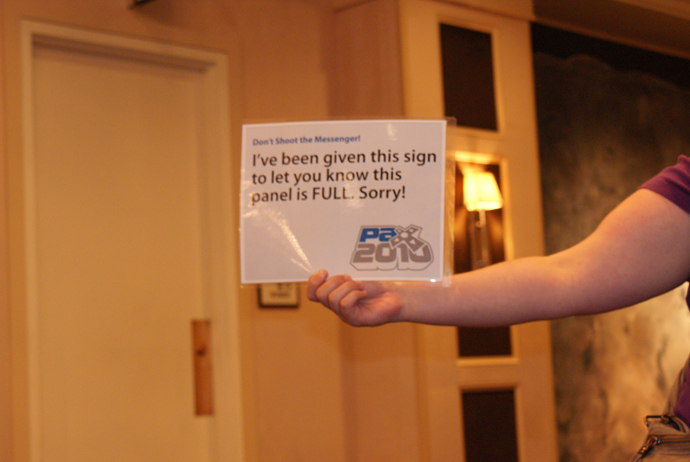 As seen above, the Enforcer-endowed 'sign' of PAX has turned away many heart-broken gamers. Having stood only a few feet in front of the sign, and being told there might not even be room for those of us in front of it, I can wholeheartedly ask you to just wait. There was plenty of room left in the theater to see Wil Wheaton (picture above) last year, and there will be a lot of open spots to see panelists this year as well. The sign is a suggestion. Plan your attendance ahead of time, but don't over-plan it -- if you see "the sign," hang out for a bit and see if some people leave the line for other reasons. There's still a chance for standing room.

In the words of Wheaton, "don't be a dick." Follow the rules on the back of your badge, and you won't get kicked out -- be friendly and helpful in addition to those rules, and you'll open doors to new friends and gaming opportunities. Remember, that guy asking you to help him find the concert hall could be a representative for the gaming company you want to work for. Be nice, turn lost loot in to Enforcers, don't ask the Lara Croft cosplayer to strike ten thousand poses, and give others a turn at the cool new games.