Let me have the idea! (Hand-holding, Part 1) 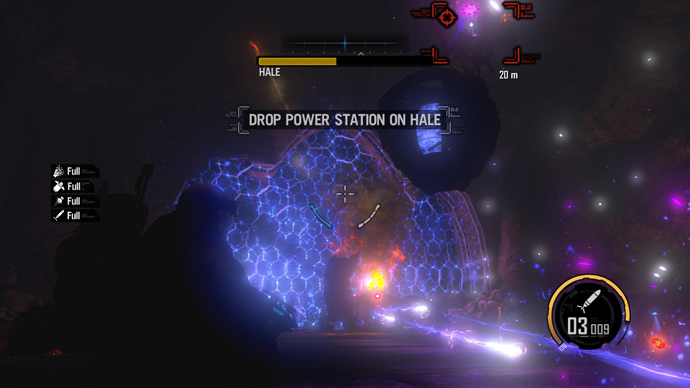 "SHOOT THE GENERATOR TO DISABLE THE MANTIS!" Gee, thanks for telling me, Red Faction. You know -- in the old days, like the Contra days, you had to replay a level multiple times to figure out exactly what to do. It wasn't easy, and often resulted in limitless fits of rage, but inevitably ended with the most glorious victory ever felt by gamer-kind.

All of the modern hand-holding restricts a player's natural ability to connect the dots between -- oh, gee, I dunno -- a massive generator with glowy lights hanging from the ceiling and the big enemy under it without the whole "Hey, shoot that thing!" indicator flashing across the screen. You know, this one:

As a word to the developers out there, I have a simple request: please, give your player-base some credit -- any credit. Don't do what Red Faction (and other games, like The Ball) do and tell us, your players, exactly what to shoot and when; what object to move and where; what door to open first; which corridor to venture into initially; or which monster to shoot first. Sure, I can tolerate aiming assistance (though do not embrace it), but I draw the line at my ability to come up with ideas. If you only have one super cool way to disable the bad guy -- no problem. I am fine with that. If you have multiple, then that's amazing on your part; just remember, and this is especially true when there is only one major option to complete an objective, do not tell me how to do it. I don't care how many times I have to die (provided there is a nearby checkpoint of some kind), I want to feel good for discovering the "secret" (albeit intended by the developer) that destroys the big bad boss.

It's a commonly-known issue that hand-holding is becoming evermore present in video games, but this is not inherently a negative progression; the negativity stems from a lack of confidence in the gamer by the developers/publishers. People die (in games) -- you have to accept that as a game-maker. Don't water it down because you fear that someone may die -- gasp -- twice instead of once in that cinematic battle. Heck, most of these games have their difficulty settings so out-of-whack that I end up playing on harder modes just because "hard" has become exceedingly easy, in fact, nearly impossible to die (and I know that I have not gotten that good at games).

I hate to continue using Red Faction as the bad example here, because Oblivion, Mirror's Edge, Far Cry 2, and Gears of War are all equally guilty, but RFA is the most recent in gaming memory. And we all know how long a week can be on the internet. Red Faction not only pointed out what to shoot and when, but also how to get to the next checkpoint. Get lost? Unsure of which corridor to take? No problem. If you take the wrong one, you'll be blocked off by something anyway; however, if you simply hit tab, a convenient GPS will overlay on your screen and overtly point the way to the next objective. No thought required: just hit tab, run along the golden pathway, and fire your gun when necessary (tip: just right-click to auto-align with the enemy, no aiming required!).

It's ridiculous, and it makes the gamer in me feel utterly disgraced.

All of this big talk, but where are the solutions - right? First of all, let's discuss when it is acceptable to highlight my path to the enemy lair. I'm happy for you to drop some sort of indicator every x minutes in case I got lost, or have the friendly NPC warn me when I am travelling the wrong direction, or even just provide a damn map that I have to manually open and navigate, but don't leave the option permanently accessible with a single click. This is especially relevant in RPGs: when I am told to "travel to Anvil, the coastal city" for the first time in Oblivion, I really don't want it marked on my map. I want to hear the description that a human would provide -- it's to the west, on the coast, somewhere in the southern region (as opposed to HERE, LET ME MARK THAT ON YOUR MAP!). It's fun to discover areas without direct assistance, and if I encounter multiple NPCs, books, or what-have-you that brag about this 'Anvil' city, it will be all the more rewarding when I finally stumble into it. Even more so when caves or dungeons are in question (or items and artifacts).

As developers, it must be remembered that players will not feel the modern rush feeling to complete quests and games if pathways are not so obviously highlighted. We all experience the need to be organized and complete journal-tasks rapidly, that way we can prevent a cluttered quest log, but individual discovery of remote (and even obvious, once found) areas far exceeds the requirement to be organized in questing.

More background items, like discreet blood trails, arrows, slime on the walls, or audio files / corpses that point the way to the destination are great ways to make the player feel like a detective, and don't make him feel like a hand-held child. In the case of games where many NPCs are present, more descriptors of key locations and progressive dialogue trees are key solutions to explaining the journey without altogether giving it away.

I already rely on a GPS to get me five miles down the road in real life; I don't need one to save me thirty seconds of back-tracking in a video game. Virtual laziness has become increasingly prevalent in our game design theories, and it needs to be avoided with sincere concern for player interest.