The following is what will be an ongoing journal from my character's perspective from my journeys in Skyrim; I have elected to play the game in what I've dubbed 'hardcore mode,' with the following restrictions:


In this week's journal, our hero is attacked by a nomadic group of bandits crossing the plains, and nearing death's end, he has an unexpected savior (and a very, very large one at that). This log will be updated every Saturday.

Go for the eyes, Boo!

I'll try to keep the spoilers to a minimum, but I should note that I may give away things like solutions to puzzles within these logs. Anything that is potentially a spoiler will be prefixed with double asterisks (**). Spoilers will be ended with the same encompassing **s. My character is a Redguard male that specializes in fast weapons and light armor (think gladiatorial combatant). I've named him 'Tony Moretti' as inspired by my Italian heritage. Let's get started!

I've arrived in a hamlet called Riverwood, tactfully named for its convenient location on a river and its proficient populace of lumberjacks. I walked in on an argument between a local shopkeeper and his sister, a resilient lass who insisted on chasing down a gang of brigands that robbed the shopkeeper's golden dragonclaw, a family relic. The ornament intrigued me, so I spoke to the store clerk and offered to assist in lieu of his sister - my offer was accepted.

I was told to venture north into the mountain pass and locate an ancient crypt that the bandits allegedly use as their lair.

I proceeded north into the mountains where the bandits were supposedly camping out. I approached the first two wanderers with weapons relaxed, but as I neared them, they drew swords and bows and attacked with ferocity! It was time to show them what Tony Moretti is made of; I drew my dulling axe and dagger and danced around their blows, ducking in for a quick jab when the slow brigands were recovering from their cumbersome swings. I'll spare the gruesome details, needless to say, they were slain with ease.

I have discovered a temple near the bandit's hideout. I'm going to enter in search of the golden dragonclaw. 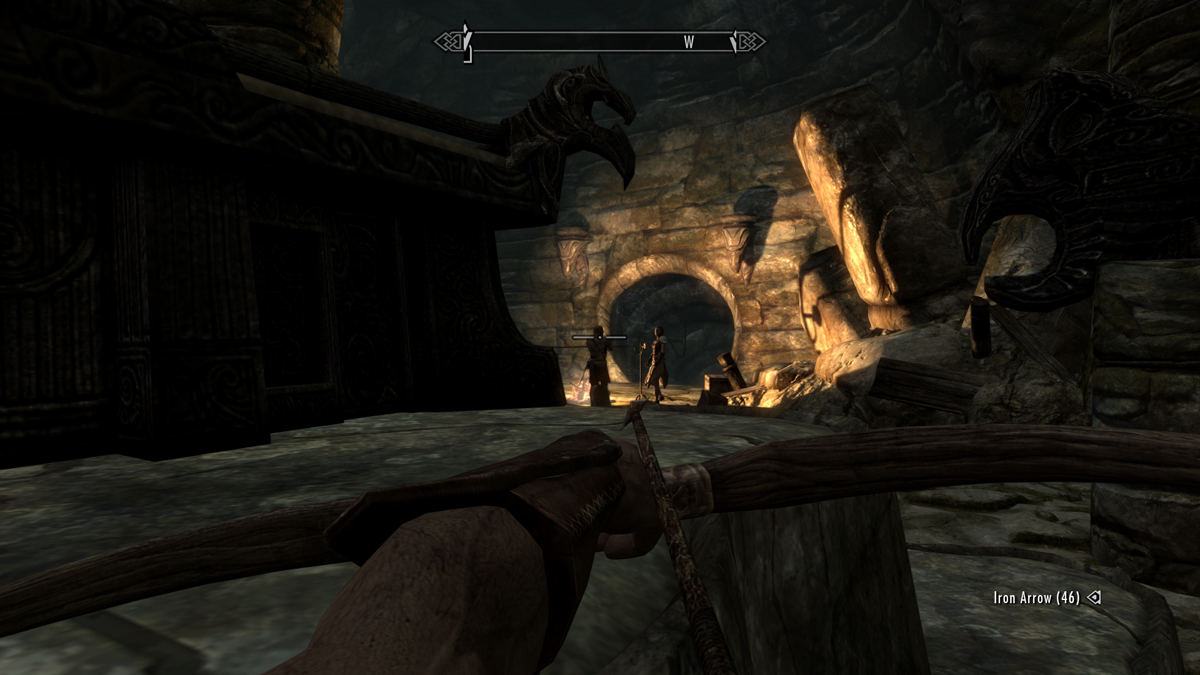 I overheard them shouting about wealth distribution. Commie bandits.

I've taken a lot of damage in my expedition so far. I'm taking a few moments to rest in what seems to be a large antechamber, it looks like the guardians of the temple have subsided for now. I'm running low on healing potions and have resorted to scavenging the urns for food. This chamber has a large lever in the center of the room and a wrought iron gate directly in front of the lever; there are three large, pyramid-like, rotating tablets to my left. I'm eerie about pulling the lever out-right, it's too simple.

I gave the lever a pull and jumped to the site - call me paranoid, but it was good that I did! A volley of arrows released from slots in the walls, and my agility managed to get me out with only a few scrapes. **I think I need to align these tablets to unlock the door, but there are several combinations and I'm unsure of how many traps I can endure. The same three symbols are represented on each tablet: a snake, a hawk, and some other creature.

I looked around the room a bit more and noticed that there's a large tablet with an engraving of a snake on the floor, accompanied by two equal-sized tablets in the far wall (with a slot for, presumably, the falling snake tablet to go if it were still mounted). The symbols on the wall are snake, blank, and hawk. I aligned the pyramid-like stones to be in the same order: snake, snake, hawk. The gate opens.** 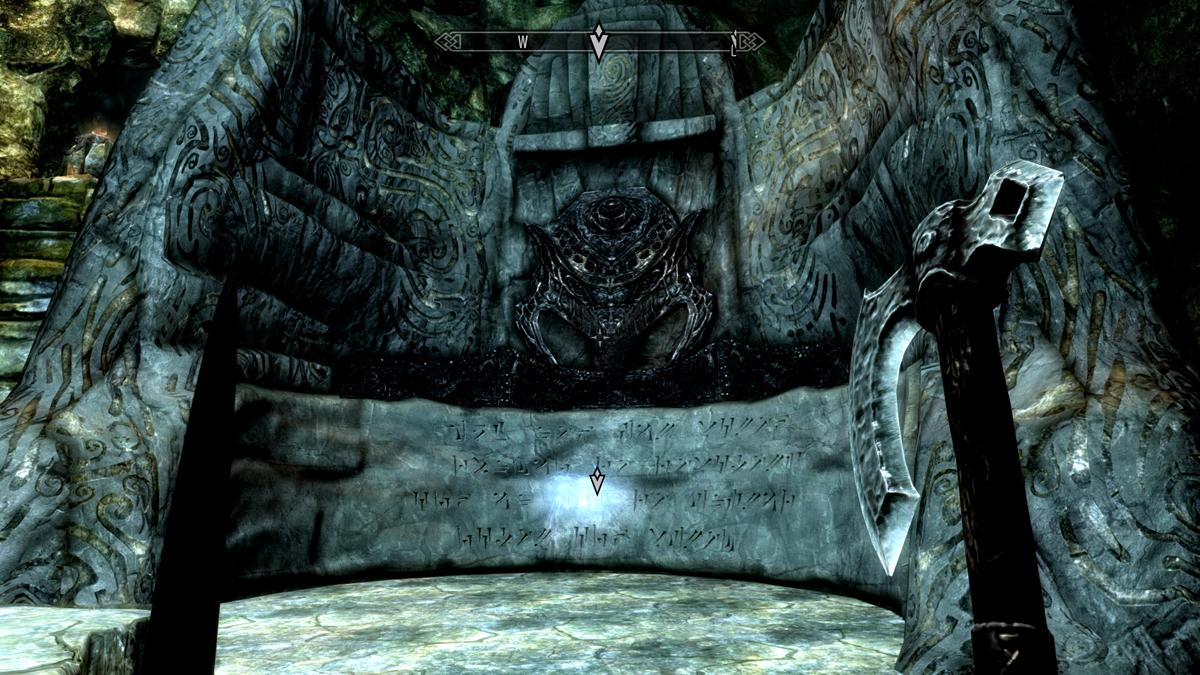 I've just battled my way through more of the temple, I've elected to take a short rest near a major stone engraving with magical runes inscribed. On inspection, it appears that they explain some sort of incantation. I'll write it down for later.

I successfully made my way out of the template and escape with the claw and the temple's secrets. I'm not sure where I am - some sort of mountain pass, it seems.

I made my way down the mountains and toward a large plain -- there was a large, hairy beast on the horizon - perhaps a mammoth? Still wounded from my fight, I considered assaulting the beast for food, but my attention was quickly averted when I saw a tribe of nomads marching slightly behind the mammoth. I approached them with some caution, given my previous experience, but they seemed non-hostile. I figured we could share tales and I might be able to figure out how to return to Riverwood to complete my task. 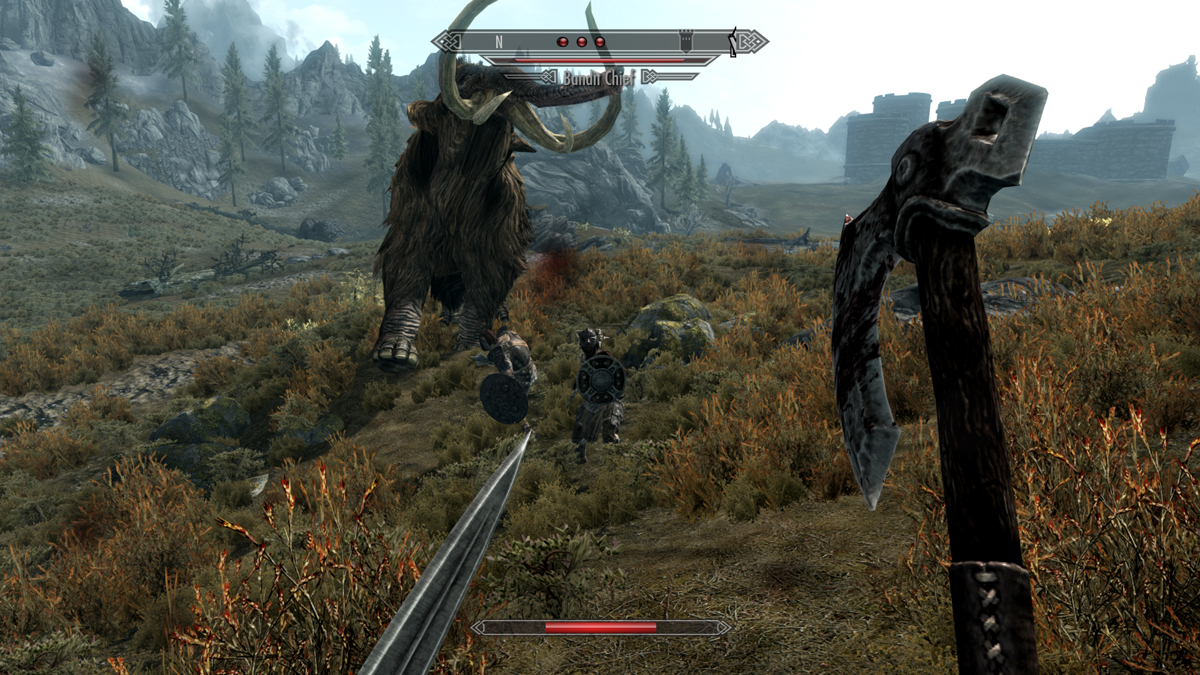 I was wrong. They attacked me - five or six of them. I saw no way out of the fight and was wounded massively from my battles in the temple. I waded away from combat and up a hill, hopefully to hold the high-ground. Just as I began praying to the Nine Divines and seeking alternatives, I heard a thunderous, riveting sound, followed by the curses of my assailants -- yes, the mammoth, likely feeling threatened or being hit by a stray arrow -- moved in on my attackers and threw them with his tusks, one-by-one, until they all lay slain. For reasons of which I am unsure, the mammoth left me alone and wandered off.

I decided I wasn't hungry anyway. Thanks, guy.

I wandered around the plains a bit more and stumbled across some sort of stone-archway. There was a large metal plate in the ground, a pull-lever in the center of several rotary stones (the same I saw in the temple earlier), and some clues as to how to turn the stones. I matched the symbols with the runes on the ground and pulled the lever, which split the large metal plates (almost like a door in the ground), and revealed a small chest and the skeleton of someone who had been entombed within this hideaway. I've heard tales of a man named Fargoth from another land -- perhaps this is the hiding spot they've spoken of?

I'm going to make my way back to Riverwood now so that I can rest. It's getting dark, but I should be able to return in time to bed down for the night.