There's something to be said about being able to survive the howling winds of Windhelm with nothing but a loin cloth and cold iron sword; Dovahkiin is not only Dragonborn, he is -- for playability purposes, of course -- resistant to all types of weather and hunger. After our previous graphics and content overhaul (which will be updated soon, no doubt), we thought it was time to venture into the world of hardcore survival mods for some seriously challenging gameplay.

"Hardcore" is used with great reason, here: These realism mods will require, in some cases, monitoring levels of nutrition, warmth, realistic darkness, first person body awareness, more challenging combat, less carrying capacity, and more. Pick-and-choose mods as you see fit! The true hardcore survivalist will, of course, use as many as possible -- we have great respect for those of you who can play like this. It's extremely challenging and, depending on the player, can either be one of the most interesting survival games or one of the most tedious real-world simulations out there.

Before we get started, it's time to mention mod conflicts and the infamous crashes: Our recent guide on Skyrim troubleshooting and mod installation instruction will help you keep your Skyrim installation as clean as possible, so please, at least skim over the sections about mod management tools (Wyre Bash and Nexus Mod Manager are highly recommended) prior to installing these.

This is a true overhaul, so we have a wide array of mods that should be on your shortlist. We'll start with hardcore survival stuff, move to environmental effects (which are more universal, even to non-survivalists), and then cover general realism and immersion for gameplay and other mechanics.

Hardcore survival, as the name suggests, isn't for the faint of heart. These mods will fundamentally change how the game is played, but are easy to remove if they don't fit with your playstyle. We highly recommend completing one playthrough before installing these, since they may make it exceedingly difficult to access some areas of the game (due to cold weather, food accessibility, stuff like that).

We'll cover other, non-survival changes below (gameplay mechanics, UI changes, graphics, audio, and everything else). Let's get started.

One of the major go-to survival mods out there, Frostfall, adds a number of highly-customizable realistic mechanics changes to Skyrim.

In short: This mod brings Jack London's "To Build A Fire" to Skyrim. 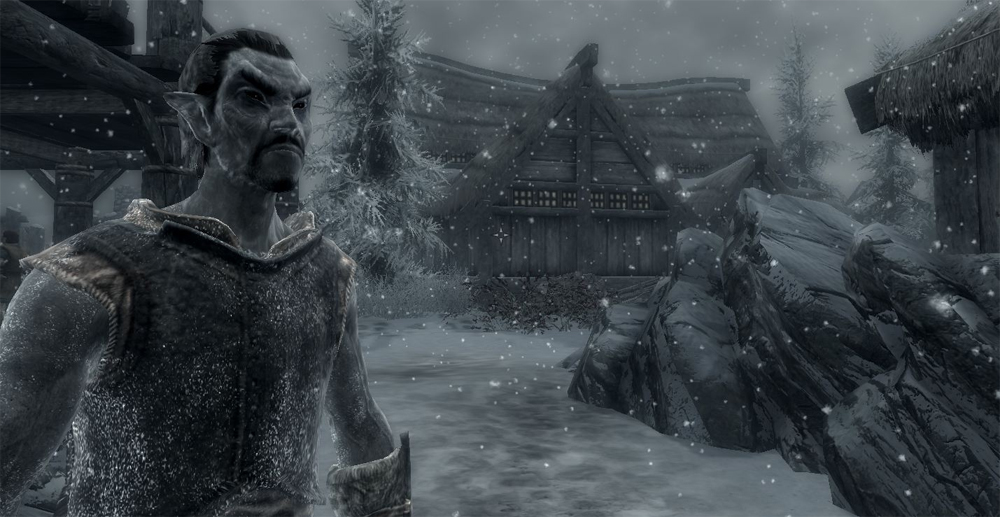 Frostfall's most notable updates are the inclusion of hypothermia, camping equipment (several other mods do this, too), cold water survival, and factors in several character-specific attributes to determine each of these components. Cold weather survival, for instance, will use worn clothing, the weather, time of day, encumbrance, shelter, and more to determine how long your Dovahkiin can fight the biting winds.

In spirit of ultimate immersion and realism, Frostfall adds craftable camping equipment for increased survivability in the event of an unexpected blizzard, torches will provide some level of heat, weathersense rings -- acting like mood rings -- will change color as the weather grows worse, camp fires provide warmth (now adding a reason for wood cutting), and cloaks from the Cloaks of Skyrim will also keep you warm.

Good news: The mod doesn't activate on its own and requires the character to read a book before initiating survival gameplay, so if you have one character that you'd like to play 'hardcore mode' and one that you're happy with as-is, this'll work nicely for you.

Separate from Frostfall, this Hypothermia mod boasts a large compatibility list, making it more of a modular framework for plugging-in favored survival mods than a full-on survival kit. Hypothermia is highly-configurable which, at its most basic level, "provides a core body temperature for the player" which is "observable in your magic effects menu." Temperature will vary based on numerous factors -- similar to those above -- like weather, location, resistance, clothing, and fatigue.

As core temperature is negatively effected by cold weather or other factors, player characters will find themselves slowed in movement and regeneration, losing stamina, reduced (or removed) ability to perform dexterous tasks like lockpicking, a loss of fast travel options, blurred vision, and eventually death. Perhaps this is even more "To Build A Fire" than the previous mod; as if on a death spiral, your character loses all ability (hopefully the only shelter isn't behind a locked gate) and will rely upon campfires, bonfires (like those found at Giant camps), and other sources of heat (from various campsite mods or other mods, listed below) to stay alive.

Rain and water also heavily impact survivability, so it might be wise to stay indoors or pitch a tent during a storm. For those that like their lycans, there is full werewolf and vampire support, too.

Hypothermia's creator (Nitor) recommends the use of these fully-compatible mods (only use one of each major type):

Survival of the Fittest was never more true (OK, well, it's probably more true in that 'real life' thing everyone keeps talking about). The Darwin's Nightmare mod by the ever-elegant bootliquor makes sweeping changes to the game's economics and implements a basic needs system, opting for more of an immersion overhaul than truly hardcore survival (but there are plenty more mods for that, as below). 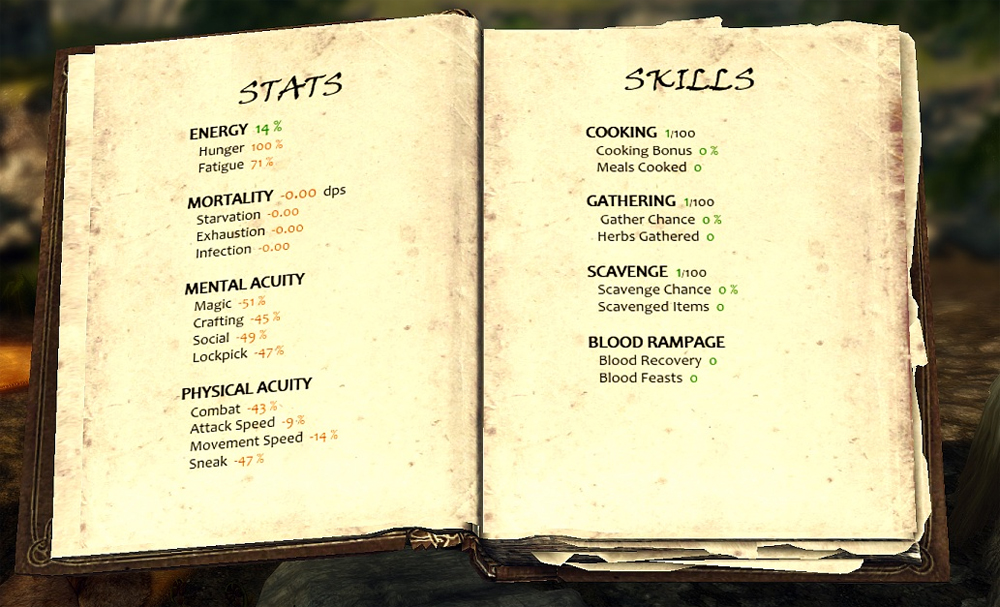 Skyrim will be poorer overall, meaning there's less random crap to sell, the speech tree will now be the quickest route to wealth (which is probably most realistic), diseases and poisons will now cause a slow death if left unattended, wildlife is completely redone, and living in the wilds is a much more deadly, realistic option.

This mod is a must-have for any woodsman or smooth talker.

First of all: the Northern Ranger camping mod is fully integrated and compatible with the Frostfall mod and the separate Hypothermia mod, so don't be afraid to use two of them at once. That said...

"Camping Kit of the Northern Ranger," as the official name goes, adds modular camping equipment (a tent, bed, firepit, pots and pans, chests, chairs, pelts, and screens) that can be individually placed within your self-designated campsite. Markers are placed on the ground and then activated to create the fully-functional, survivability mod-compatible campsites. A "pack up camp" button makes for awesome portability.

On top of this, the mod adds a camping shop outside of Riverwood for a quick start (the "Amberwood Camping Shop"), but if that causes conflicts with terrain or village modifications, an alternate version can be install that instead adds the camping equipment to the Riverwood Trader.

This one's a bit too hardcore for my personal play style, but more than ten-thousand downloaders have loved its changes, so don't take my word for it!

Imp's More Complex Needs integrates a complete nutrition system to Skyrim, requiring careful tracking of caloric intake (which is hard enough to manage in the real world), water, proteins, and other basic nutrients. The mod ships with both a 'complex' (twelve trackable elements) and 'basic' (five trackable elements) mode, hopefully making things a little less intrusive for players who don't aspire to be nutritional coaches.

Penalties will be incurred whenever one of the nutritional levels drops below a preset value, so keep careful track of your feeding routine. Thankfully, the mod includes a timescale adjuster, making it possible to prolong the effects of food or water and reducing the intrusiveness of the mod.

View our Skyrim Realism & Immersion overhaul mods on the next page.