Given the opportunity, we always explore the technology behind upcoming games; understanding GPU specifications is great, but it's important to put that knowledge to practical use. We were able to talk with the developers of BlackSpace (originally covered here) and ask them about how, exactly, the visual interactions and programming works on a development level. Some topics covered were their engine's effects capabilities, 3D Vision optimization, how the code handles physics calculations between the GPU and CPU, engine technology, and more.

If you like our hardware guides -- personally -- I think this is an excellent way to learn about how those components actually interact with games. If nothing else, it's certainly cool from a technological perspective.

This interview was conducted with Volga Aksoy, Co-Founder of PixelFoundry and Tech Lead on BlackSpace. The game is currently on KickStarter and is looking for funders. You'll find the unedited interview on page two (certainly useful if you're a developer), but I've broken down our conversation into a more consumable form here:

First of all, a quick note on what this game actually is: BlackSpace is an asteroid mining space RTS that boasts deformable terrain and "destructible everything," both of which are computation-intensive on the CPU. Beyond the game's interesting technologies, its gameplay and mechanical direction look quite fun -- I'll leave this video here to explain it more succinctly, but in short, your goal is to mine minerals from asteroids, build and expand your base, and establish turrets to defend against invaders.

That's my kind of game.

BlackSpace's implementation of stereoscopic 3D (discussed in depth below) and high-dynamic-range lighting means the game will, hopefully, facilitate further realism in space. High-dynamic-range rendering (HDRR), as defined by nVidia, means that the darks can be really dark, bright things can be really bright, and we can see detailed objects within both; there is theoretically no detail lost just because something is dark, which, in a space game, tends to be important. Here's why: 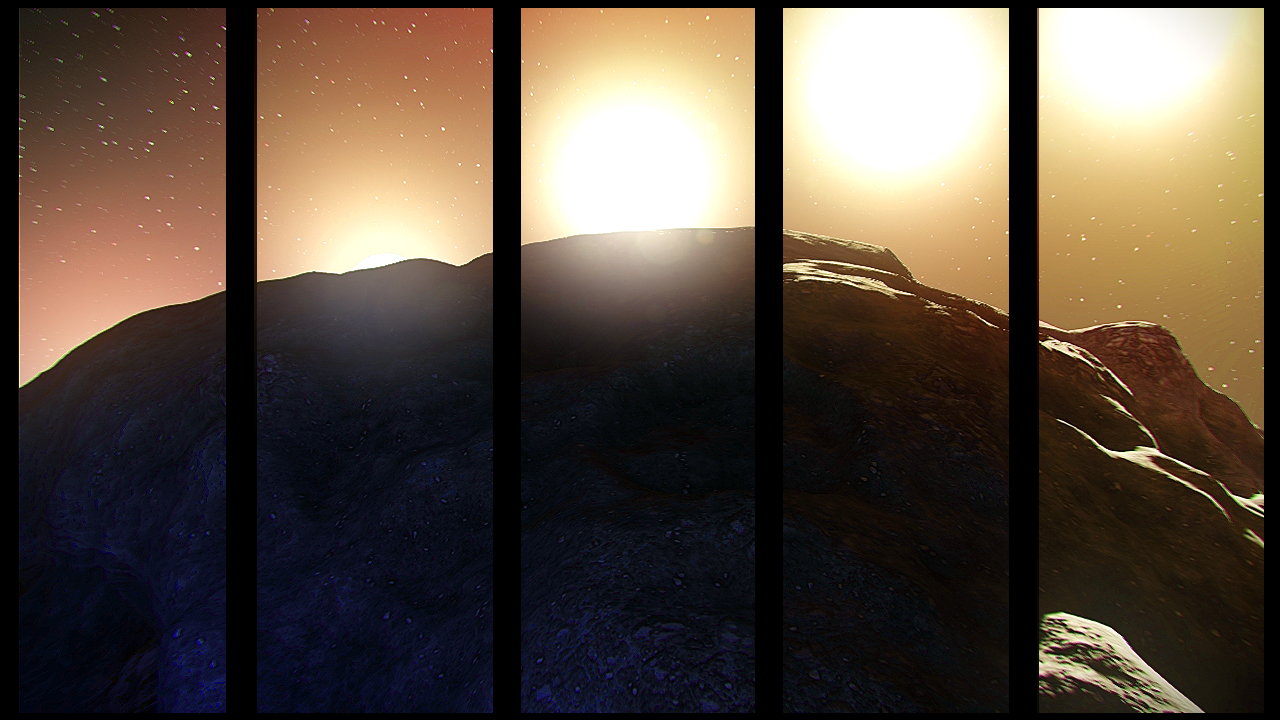 To prevent asteroids from appearing "pure black" in dark scenarios, the team applies "a slight ambient contribution to the dark side of the asteroid," which is partly reflected by the above example.

"Unlike many other games -- where their gameplay takes place on a fairly flat terrain, and sky ambient and the sun light direction is constant for a given time -- in Blackspace, the user can see both the daylight and the night side of the asteroid simultaneously. Compound that with the fact that the terrain is deformable over time in various ways, maintaining a pleasing look across the whole surface becomes fairly tricky. With any new lighting feature we add or change in the game, we double and triple check that it looks acceptable under all changing conditions."

Now, some of you who saw a few of our initial Skyrim graphics overhauls will remember that despite lighting advancements made by modders, the game often looked incorrectly exposed (over-exposed in light areas, under-exposed in dark areas) and never looked quite realistic. These were, of course, mods - and they've improved - but they make this point easy to understand: BlackSpace has put in place tone mapping post-FX, which will help create more visually-accurate HDR lighting, unlike what is seen in some of those Skyrim mods.

Here's another example of the lighting effects:

In terms of Anti-Aliasing technology, BlackSpace will feature both FXAA and MSAA, making for better imaging in systems that have the GPUs to handle them - which most of you should.

If you find yourself particularly interested in learning more about BlackSpace's lighting technology, you can read more at this dev-blog post.

In our review of nVidia's 3D Vision, we found nVidia's proprietary version of stereoscopic 3D gaming to be incredibly immersive for specific games, but entirely too much work for others. Some games - specifically those which were not developed to 3D spec - would exhibit shadow flickering or lighting conflicts in 3D (similar to what is seen in z-fighting, shown at 5:57 in this video). The flickering seen in the video normally occurs when a game uses deferred rendering, where the objects are first drawn, then the shading and lighting is applied after. This meant disabling settings and .ini tweaks were often necessary to fully enjoy the 3D Vision tech, which uses active shutter lenses that operate at 120Hz (as does the monitor). 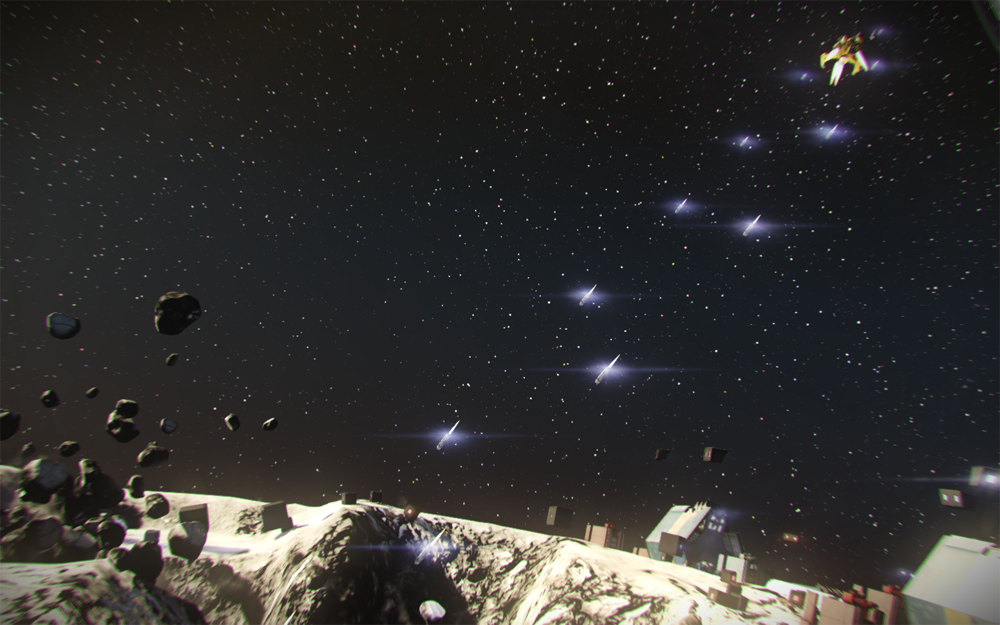 BlackSpace hopes to remedy that problem by coupling with nVidia, who have told us before that they're happy to support almost any developer in a stereoscopic 3D overhaul. Even though games that did not develop with 3D in mind can be retrofitted (with special drivers that nVidia releases), you'll never get the full desired experience; settings will almost always have to be tweaked when playing a retrofitted 3D game. When we asked Aksoy about these problems, he told us that 3D Vision should be much more appealing in their game because they're supporting it from the get-go. While you'd do well to find his full description of why 3D tech will work better with BlackSpace on the following page, here's what we found most promising:

"The thing I love the most about our engine is the stereo 3D rendering capability. There is something to be said about roaming around on a desolate asteroid where you can peer into the depths of space while also looking at the little cracks on the ground and see a vast distance between the two without the need to move the camera.

Even though Blackspace also uses a deferred rendering pipeline, we are making sure that all of the visual features, including the 3D UI elements, follow NVidia’s specs and use the correct depth when rendering for each eye. If I am given the choice to have the driver automatically apply stereo 3D to a game versus the game rendering the view for each eye, I’d take the latter because it ensures that you as the developer have control over what the end-user will see including applying special adjustments to parallax settings."

The idea here is that visual artifacts will be mostly nullified by the game's stock support of 3D settings, hopefully making for a less work-intensive tweaking experience. So if you've been wanting to really enjoy 3D technology in space, this is your chance.

Making Use of Quad-Core CPUs

BlackSpace isn't making use of nVidia's PhysX capabilities, but they are using another physics processing engine (called BEPU), which does, in fact, utilize multiple threads. We've noted in several of our PC Builds that the gains in Intel's hyperthreading technology are often negligible for most games, making the 3570k a more reasonable choice for gaming. With that said, BEPU itself stands as an exception to this: From the engine website's own testing they've conducted (see the graphic below), BEPU actually exhibited a 41% performance boost (on a 4.5GHz turbo-boosted i7-3770k) when making use of 8 logical threads rather than 4 logical threads.

The gains after the initial 4 threads (or 4 physical cores without hyperthreading) will taper off gradually, but 41% will be more-than-noticeable in high-end games that can afford the threads. Although I doubt many of our regular readers should suspect problems running BlackSpace -- and while BlackSpace itself may not perfectly reflect BEPU's own testing, since it has other things going on that need threads -- it's important to know that quad-core CPUs and hyperthreading are being taken advantage of in newer engines, which will be reflected in games like BlackSpace.

On destructible environments, Aksoy told us the following:

"Other than the asteroid itself, when any of these objects are destroyed, we break apart the object by randomized spawning of smaller parts that make up the original object, and hand them over to the physics system to deal with it as a rigid body with physical characteristics that make sense. This can mean that the scrap metal part could still have an articulated assembly of parts such as hydraulic piston links."

We asked if the team had taken advantage or tested with Intel's much-praised HD 4000 series graphics -- the response wasn't disappointing. Owners of the HD 4000 or 3000 series can expect to play BlackSpace on reasonable settings without visual artifacts, and the team is planning to optimize the game for various hardware arrays, which will include Intel's HD graphics. While I didn't ask about the Trinity series, I'd imagine the new Trinity line could also run BlackSpace quite reasonably, especially if the HD 3000 can. 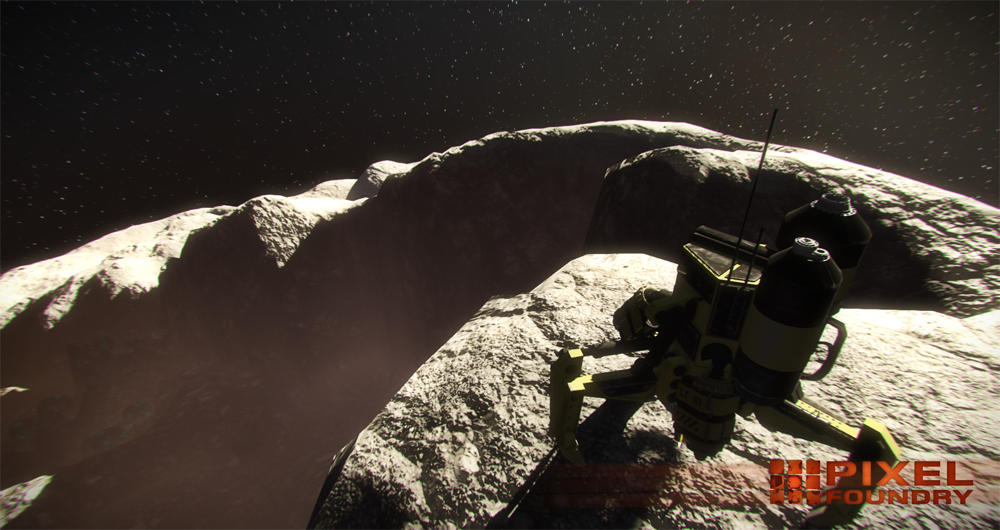 Being a space game, I always have to ask developers about the presence (or lack thereof) of six-axis movement. It doesn't make sense for every game, but after playing Shattered Horizon on Steam, I've always found it intriguing for gameplay mechanics.

It won't be available in BlackSpace, but for good reason:

"When we tested six-axis controls, it was quickly apparent that with constant gravity being applied to the lander, the users would have to dedicate almost all of their attention to simply keep the lander upright instead of performing other more complex tasks like tethering, mining, or fighting the enemy."

No loss there, then, but more importantly, the mechanics behind lander movement have been focused on heavily by the team and have resulted in something quite fluid, as demonstrated in this video:

To this end, Aksoy told us that they've achieved a healthy balance between stability and agility:

"We believe that we have what is a good balance between agility vs. stability for the lander and it keeps the controls familiar for more traditional action shooter fans while keeping the sense of controlling a vehicle with weight."

What is The BlackSpace Team excited about?

This question was quite simple: I asked what the team gets most excited about with the game's technology and design, to which Aksoy answered:

"With Blackspace, it’s tough to point at one aspect and claim that that is what sets it apart. While the spherical and deformable play surface is definitely something that we feel is a really exciting feature, you could almost talk about every aspect of Blackspace that we are excited about and show another game that has already done some version of it.

What sets Blackspace apart and excites us the most is the visceral game play experience as a whole. The hands-on dynamic physics, innovative strategy, elements and high-end visuals all come together, teasing the player to interact more with different aspects of the game. It is this design and art working with the technology behind Blackspace that makes it unique."

From a mechanical and gameplay perspective, it's fair to say that I'm excited about BlackSpace -- the lander's mechanics alone look excellent and fun to control, and the base-building and mining features tie everything together. Technologically, while the game isn't claiming to be breaking any world records, they've certainly taken advantage of everything available to them. The game should scale well between various hardware configurations, as evidenced by success on the HD 3000, and stereoscopic 3D will be a nice addition to those who have access to it.

We'll be posting more information about BlackSpace as it becomes available!

Continue on for the full, uncut interview, if that interests you.