Because our most up-to-date test benches use Intel products, I'll be writing most of this guide referencing those C-states and power saving options. Haswell adds a couple of very impressive power saving functions, like DevSleep for SSDs and S0iX (active idle) for the CPU itself, though and IB-E/SB-E users will also be able to follow parts of this guide. AMD shares a few of the same top-level concepts, but the settings are executed differently. As such, this is largely an Intel-based guide to saving power with BIOS C-state stepping (C6 / C7) and other features, like Power Decay Mode, EIST, and Load-Line Calibration. This guide will help reduce the overall power footprint of your computer.

In my recent "What Next?" guide, I provided sample hardware upgrades and basic mods for post-build systems. As a starter to power control and monitoring, a couple of these items might be beneficial to more fine-tuned tweaking; if power conservation is highly important to your usage applications (read: 24/7 uptime or home server / HTPC environments), it could be beneficial to look into:

Fair note: The fan modulation changes will largely yield insignificant power savings, but can improve the overall life of the fan bearings and decrease overall system thermals. Power delivery is more efficient when the system is cooler on the whole, so a cooler machine means higher power efficiency driven to the silicon.

These quick changes will improve the overall life of your bearings (and thus, your system), minimize noise emissions, and marginally reduce power draw. You'll need these tools:

Most UEFI BIOS menus hide their CPU and System Fan speeds under a "hardware monitor" tab. Locate that tab in your board's menu. Some configurations might have the fan speeds to 100% or other high values; by setting system fan speeds and CPU fan speeds to "auto," the platform will increase voltage delivered to the fans during times of intense load or thermals. If you've got a pretty good handle on your system's thermals and feel confident in manually setting a low speed, that can also be done through these menus. As a rule, we generally recommend always leaving the CPU fan setting on "auto."

System fan settings should also be visible in this panel (if you're not using hardware controllers to regulate their voltage). Search for "System Fan 1," 2, 3, etc. and make appropriate adjustments. If the fans are PWM (pulse-width modulated), "auto" mode will modulate voltage based upon system demand and thermals. A manual setting (like 60% or 40%) will also work, just make sure you have a good understanding of your system's thermal requirements.

Check HW Monitor from your OS to validate the fan speeds. Min, max, and present values will be highlighted. Use these to check if your changes have applied. 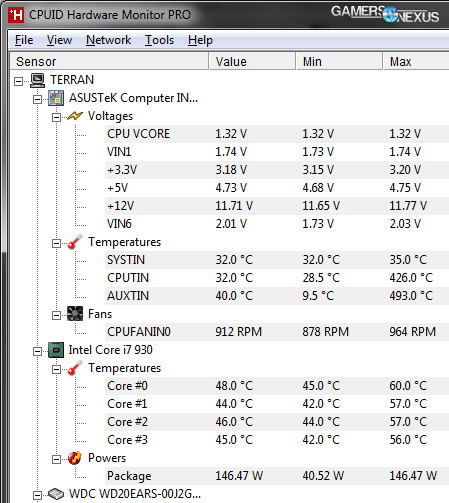 Let's move to Afterburner or equivalent software. With MSI Afterburner -- which should be compatible with all cards -- users can set a custom fan speed curve to gradually increase speed with load. See below:

In this example, I've set a custom curve to keep the fan at 40% speed until the GPU hits 30C. Once it hits 30C, the speed very gradually increases to 55% until the GPU hits 65C. At this point, the fan speed jumps sharply to 80%, aiming to rapidly dissipate heat. The objective of a curve like this is to keep the GPU under 80C by using short, bursted, high fan RPMs to minimize annoyance to the user and maximize cooling to the GPU. It's a trade-off between noise and cooling, and a curve like this accomplishes it well.

This lowers your overall system thermals and noise, which increases power efficiency and extends fan longevity by using voltage modulation. 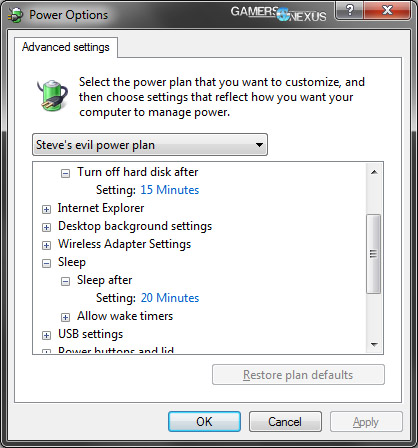 I'm not going to get too in-depth here, since most of us are familiar with Windows, but it's pretty important to briefly mention. Windows has built-in sleep and hibernate states that can dramatically reduce power consumption by individually powering-down unutilized components. This includes magnetic hard drives (spin-down to lower RPMs), the CPU (put unused components to sleep), GPU, and even SSDs (DevSleep in Windows 8).

As many of you likely know, putting a system to "sleep" suspends its active session to RAM, so RAM will retain power while all other components reduce their own consumption. Hibernate stores data to the physical disk, and thus often requires large chunks of storage to enable (4GB+). This makes it sub-optimal for SSD usage, but if you pass hibernation through a hard drive with more storage, it's an easy choice.

Restoring from the disk or powering down the RPMs of a disk will take a while for the system to restore itself (can be seconds to a minute, depending) given the nature of a physical platter spinning-up.

All of these settings can be accessed through Control Panel -> Power. We'd recommend configuring your own power profile that suits your needs. Disabling the screen when idle, spinning-down the HDD, and activating some level of sleep are all recommended. Hibernate is nice, but can often introduce system instability with some OS/hardware configurations. Keep in mind that S3/S4 power saving states will destabilize the system when using certain overclocking settings (check the manual for your board).

Before jumping to BIOS, I wanted to offer a couple of pre-purchase build options that could dramatically affect overall system power performance:

Time for power saving BIOS settings. Hit Page 2 for those.