In this article and video, we'll explore how a VRM works, what a chipset does, and PCI-e functionality; part of this discussion answers the "what is a MOSFET?" question, including further information on chokes, capacitors, and the composition of a voltage regulator module.

Let's start with our video, which addresses all of these topics in a more rapid form by proxy of an MSI Z87-G45 board; AMD boards use the same underlying architecture, so the information is relevant regardless of processor.

Motherboard Diagram - The Anatomy of a Motherboard

This diagram requires JavaScript enabled to work properly. Hover over the dots on the board to read about the components. If, for whatever reason, this diagram doesn't work on your browser or phone, you can refer to our JPG version. 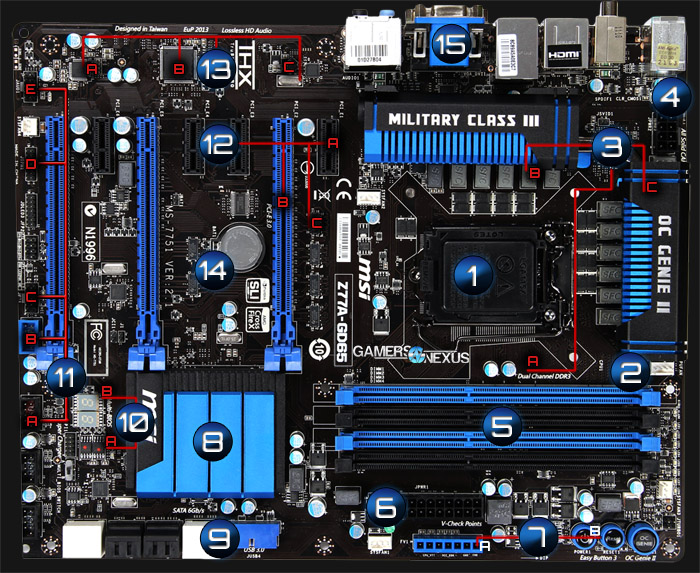 (Quick shout to friend of the site Matt Geiger for assisting in the brainstorming for diagram layout).

What is a VRM? Chokes, MOSFETs, and Capacitors Explored

At a top-level, a Voltage Regulator Module (and its backing components) is responsible for cleaning the power / voltage delivered to different electrical components. Let's look specifically at how a VRM interacts with a CPU and motherboard.

The average CPU has a specified operating voltage of somewhere in the 1.1v-1.3v range, +/- a quarter to allow for over- and underclocking. Any more than 1.3v on the average, modern desktop CPU begins to threaten the endurance of the silicon, but improves short-term stability under extreme overclocks. The power supply delivers 12v power to the board for use in the CPU, but in order for this source of power to be usable, the board must step-down the supplied voltage to a more usable output for the CPU (1.2-1.3v, for instance). This is done by phasing the power.

In the process of stepping down the voltage, the phases through which the power is passed will help clean the supply, reducing chances for vDroop (voltage drops). A voltage drop is when the voltage drops below the user-specified vCore setting; if vDroop happens when overclocking at stability-threatening frequencies, the system might exhibit BSODs or other crashes and disabling errors. 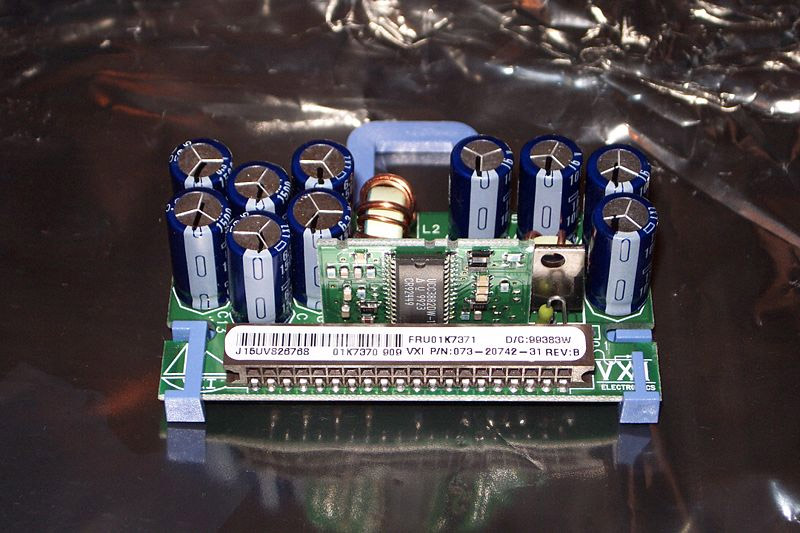 About as basic as it gets: This is a VRM designed for a generic circuit. Features MOSFETs, an IC, caps, and chokes. Image from Wiki Commons.

So by cleaning the power more times (by sending it through more phases), we can reduce the risk of vDroop and improve overall stability at extreme frequencies. More on this in a moment. Voltage Regulator Modules are by no means computer-specific; they can be found in any microprocessor-equipped electronic device dealing with power phasing and voltage cleaning (radios, TVs, cars). The composition of a VRM remains the same across all these applications, as discussed below.

What Makes Up A VRM?

I think there's some misconception that the VRM is an independent, self-contained component on the board or in its host device. In actuality, "VRM" is a term used to collectively describe the composition of MOSFETs (and Driver ICs), capacitors, and chokes, which are used in unison to accomplish the power phasing objectives. To re-iterate in list form, a VRM is made up of:

MOSFETs, or Metal-Oxide Semiconductor Field-Effect Transistors, are responsible for the actual amplification and switching of signals and assist in voltage identification when communicating with the CPU. The CPU tells the MOSFET the requested voltage, and the MOSFET uses a series of logic gates to assist in delivering that voltage (from the 12v supply).

There are several variations on high-end MOSFETs for overclocking, but most of them work in a similar manner. Here's an image from Gigabyte that shows the modern take on driver MOSFETs:

As shown above, most motherboard manufacturers (in high-end boards, at least) now mount the driver IC and two MOSFETs on a single chip. This reduces overall surface area used on the board and has thermal and power advantages.

This image shows ASUS' EPU in action, which is another take on driver MOSFETs. As you can see, the EPU communicate with the CPU to achieve a VID (Voltage ID), which is then used to achieve the correct voltage during the phasing process. 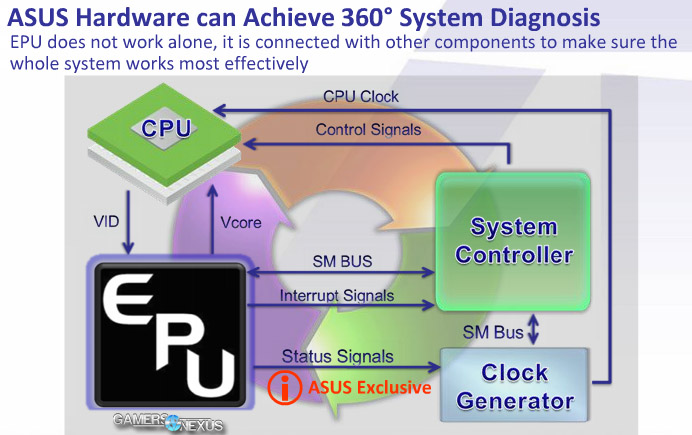 How Does a VRM Work? What does a VRM do?

A VRM physically phases down the higher-voltage supply into a usable voltage for the CPU. The power supplied through the 8/4-pin power connector on the board feeds the CPU. This power is fed through the phases on the board until it eventually gets to the processor, which receives it at the stable, lower voltage.

If you have 8 CPU phases on the board, the power will be voltage-checked eight times before being supplied to the CPU (the power is stepped to the correct voltage in each phase, then checked); similarly, a 12-phase board will step down the power to the same voltage, but because we're passing the supply through more phases, voltage drops can be more gradually controlled, thus creating a cleaner supply of power to the CPU that is more stable.

When shopping for motherboards, you'll likely run across the phase power design terminology in marketing text. This is the specification that describes the number of phases dedicated across the board and to all components. Phase power design is often listed as 4+1, 6+2, 8+3, etc. The number preceding the plus sign (4, 6, and 8 in those examples) is indicative of the number of phases dedicated to the CPU, thus a 6+2 phase power design will dedicate 6 phases to cleaning CPU power. The number after the plus is for other components, often RAM or HT (HyperTransport) for AMD. Just like the CPU, more phases to RAM will help control voltage supply and allow for greater overclocking, but the RAM phases are significantly less impactful than the CPU phases.

As a general rule, you can count the number of chokes flanking the socket to determine the CPU power phases. Eight chokes, in the instance of our MSI board in the video, corresponds to the 8+X phase power design.

We've answered this question in our "picking the best gaming motherboard" article, but I'll revisit it very briefly here.

When we're looking strictly at the VRM and ignoring all other board components, we're mostly looking for high-quality caps, chokes, and heatsinks for the MOSFETs. I'll start off by saying that anyone uninterested in overclocking needn't worry about the number of phases or the same level of quality components as overclockers. You'll be fine on more simplistic phase power designs and with lower-quality components, since you won't be putting them through as much abuse.

As far as caps go -- and we've got another video coming with specifics -- it's important to opt for leak-resistant capacitors. These are often branded as "Japanese Capacitors," "Dark Capacitors," "Solid Capacitors," "Hi-C caps," or "Military-Class Components." Electrolytic capacitors are responsible for containing power (a capacitance), and as the capacitor ages, it'll become prone to capacitor aging and decay. As the capacitor decays, it loses its ability to retain power and eventually introduces instability to the system or renders the host device useless. Capacitors can easily be replaced on the board in the event of a failure.

With leak-resistant capacitors, it's highly plausible that the usable life of the system will be exhausted before the capacitor itself needs to be replaced. This improves longevity of the system and its ability to withstand high load.

Then we have chokes. There are different styles of chokes out there, but when looking for a board ready to handle high overclocks, it's a good idea to look for SFCs (Super Ferrite Chokes), Premium Alloy Chokes, or other high-quality chokes. An SFC improves power efficiency and is more stable under higher loads, enhancing the motherboard's ability to step-down power when dealing with overvolting and overclocking.

Here's a look at Gigabyte's setup, showing the MOSFET (top left chip) and Ferrite Core Chokes (the bricks that line the heatsinks). 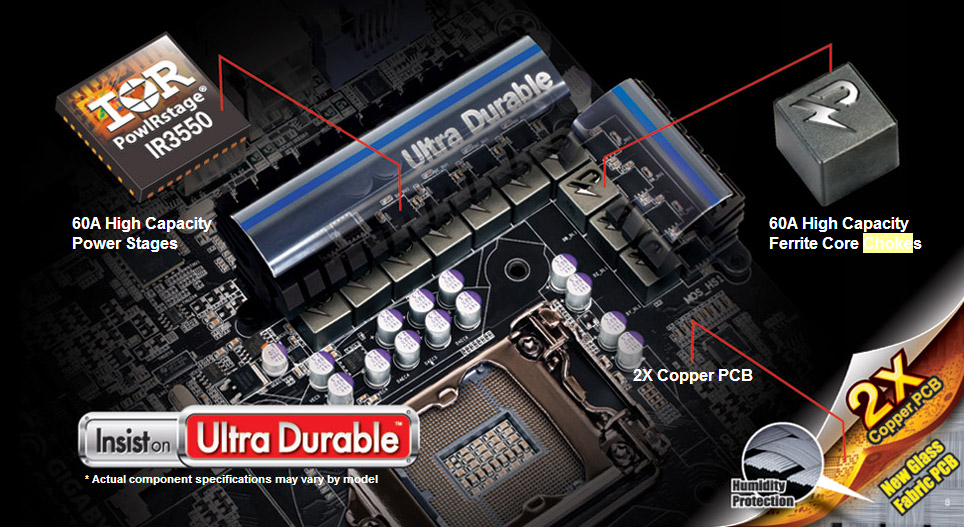 MOSFETs and heatsinks go together. MOSFETs are often located underneath the heatsinks flanking the CPU socket, given their propensity to rapidly increase in thermal output as the MOSFET continues to phase-down the voltage. When dealing with any sort of power conversion, significant thermal output is the byproduct of the conversion (the energy has to go somewhere). In order to continue operating under load, we need to dissipate that heat rapidly -- this is done with copper heatsinks.

The MOSFET itself is also important. There are different types of MOSFETs, and you've probably noticed that a lot of high-end boards from ASRock, MSI, ASUS, and Gigabyte utilize different terminology for their take on it. DrMOS (Driver MOSFET) is used by MSI and ASRock, ASUS uses an EPU (Energy Processing Unit, which we talked about here), and Gigabyte uses PowerMOS/DES MOS and other solutions. At the end of the day, it all comes down to how well the MOSFET solution can dissipate heat and perform under intense loads. All of these solutions are good at different aspects of either energy preservation or overclocking, so do some research on each prior to making a decision.

If you're just buying for a mid-range machine and aren't too concerned with overclocking (but might play around with it), the selection isn't worth spending a large amount of time researching. Extreme OCs are more volatile, though, so care should be taken when buying.

Continue on to Page 2 to learn about the chipset and PCI-e functionality.