Small form factor enclosures were huge at this year's CES. Last year we saw a few behemoths -- like the 900D -- but with the advent of "Steam machines" and boxes like the Brix Pro, mini-ITX is gaining traction in the marketplace. Some companies have always been in the space, others are riding the trendy wave; SilverStone is a good example of a manufacturer that's been present since the get-go, especially with their high-quality SG08.

Lian-Li is another that's been in the mATX/mITX game for a while. As with nearly all Lian-Li enclosures, the PC-TU100 is a fully-aluminum case with a brushed-like finish. All-aluminum materials lend to a 4 pound overall weight, aided by the small 6.3" x 10.8" x 9.5" dimensions. The case is targeted at those who move their systems around a lot -- LAN gaming is the easy example -- and is equipped with a handle, a single cooling fan, and enough space for a low-profile video card.

In this quick Lian-Li PC-TU100 case overview and unboxing, we'll look at the specs and primary uses for what is one of the lightest mini-ITX cases.

The PC-TU100, aside from having a very annoying name to repeatedly type, is incredibly portable and small. It's got thermal concerns, as with anything of this size, so spec'ing out the system to be most compatible with the small form factor is important. In general, using a high-power, low-TDP card like a GTX 750 Ti makes the most sense; the smaller size and lack of power connectors makes it easier to stick into this case without generating loads of heat that'd be tough to dissipate. The TU100 only has one cooling fan in the front (1x120mm) with a few side vents for component fans. This is fine for an HTPC with limited thermal concerns, but any sort of gaming will need carefully-picked components and should likely be coupled with a low-profile CPU cooler. The enclosure can fit CPU coolers up to 60mm in height (before brushing against the SFX PSU) -- Thermalright and SilverStone both make good low-profile CPU coolers, if you need one. 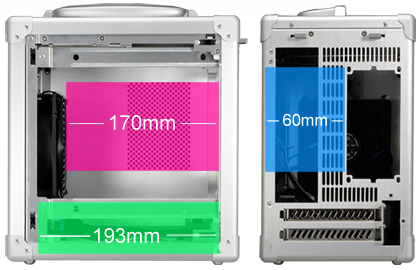 In terms of drive bays, the case has 4x2.5" slots on the bottom (used for SSDs or laptop HDDs) and one slim optical drive bay in the top/front. The SFX PSU mounts in the back, just above the I/O panel, and is mounted over the CPU cooler.

Unfortunately, our mini-ITX bench had a bit of... an accident... when it was overclocked a few months ago, so we've been unable to run thermal benchmarks on this one just yet. Build wisely, though, and it'll make for a great LAN box or HTPC.