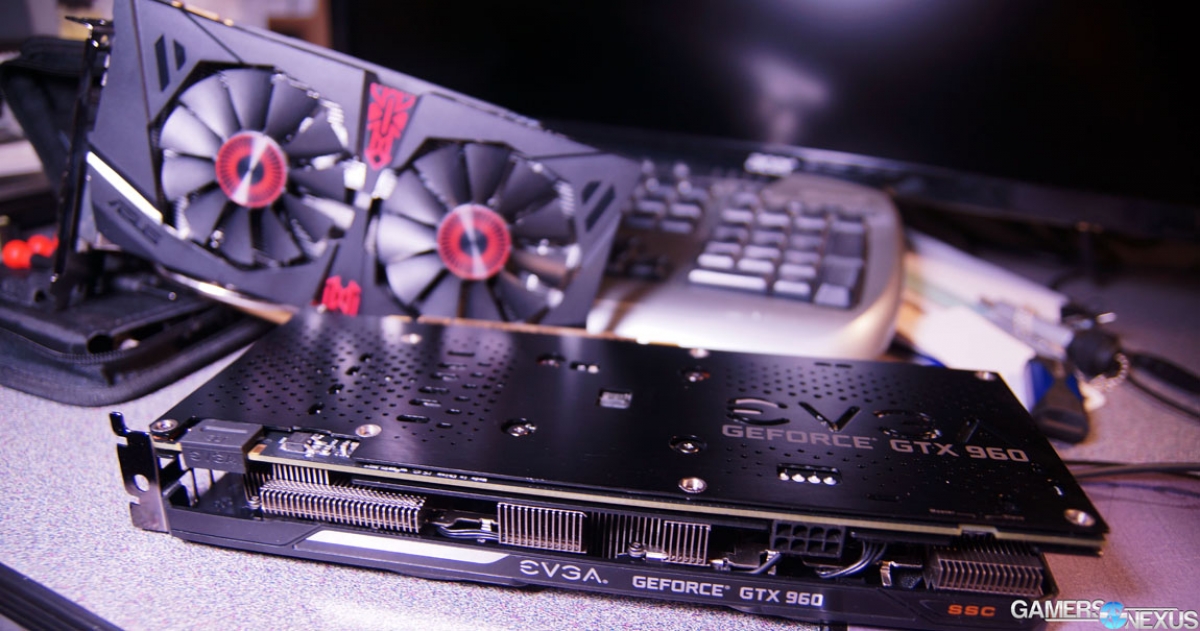 The latest 347.88 GeForce driver was used during testing. Game settings were manually controlled for the DUT. Overclocking was neither applied nor tested, though stock overclocks (“superclocks”) were left untouched. The two devices tested are not identical in clock speeds, and so some small disparity may be reflected in FPS output as a result of clock speeds.

VRAM utilization was measured using MSI's Afterburner, a custom version of the Riva Tuner software. Parity checking was performed with GPU-Z. FPS measurements were taken using FRAPS where possible. In the case of Battlefield: Hardline, which did not accept FRAPS input, we used MSI Afterburner to measure average FPS and did not calculate percentage lows.

We strictly looked at capacity performance of the GTX 960, so other video cards are not shown in these tables. In effort of consolidating graphs and data presentation, we've listed multiple resolutions per graph where applicable.

Assassin's Creed Unity is the poster-child of memory capacity advantages. The game regularly capped-out our available memory on the 4GB card and fully saturated the 2GB card. This saturation results in memory swapping between system RAM and the GPU's memory, causing the massive spikes reflected by the 1% low and 0.1% low numbers.

In this scenario, Assassin's Creed Unity has a massive performance differential between the 4GB and 2GB options, to the point that 4GB of VRAM will actually see full utilization and benefit to the user's gameplay. Despite similar average FPS numbers, ACU exhibited jarring, sudden framerate drops with the 2GB card as memory cycled, effectively making the game unplayable on ultra settings at 1080p. The 4GB card had an effective minimum of 30FPS and an average of 39FPS, making for a generally playable experience. Settings could be moderately tweaked for greater performance.

A 4GB card has direct, noticeable impact on the gaming experience with ACU. 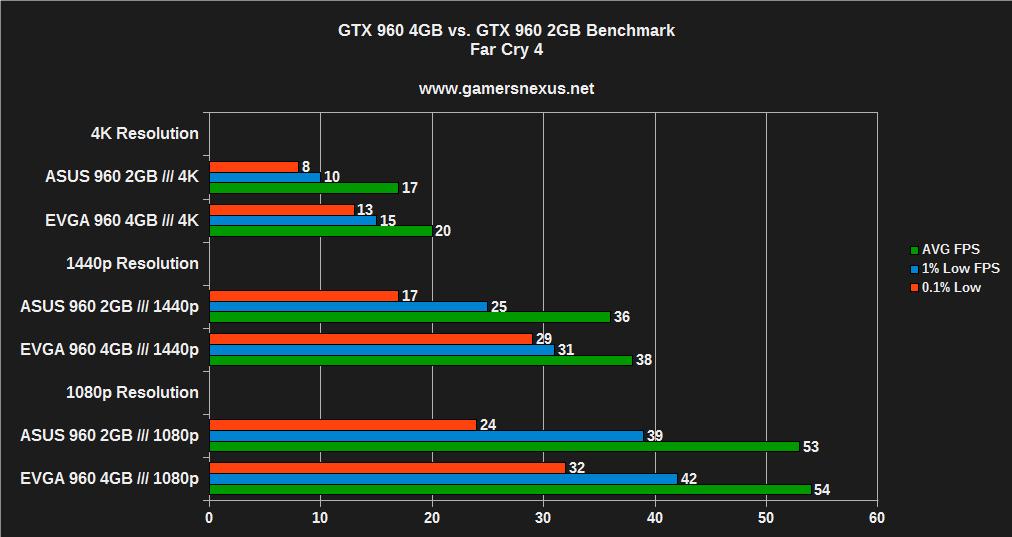 The above is for "Ultra" settings. Below is "Very High," a chart requested by redditor "SPOOFE." 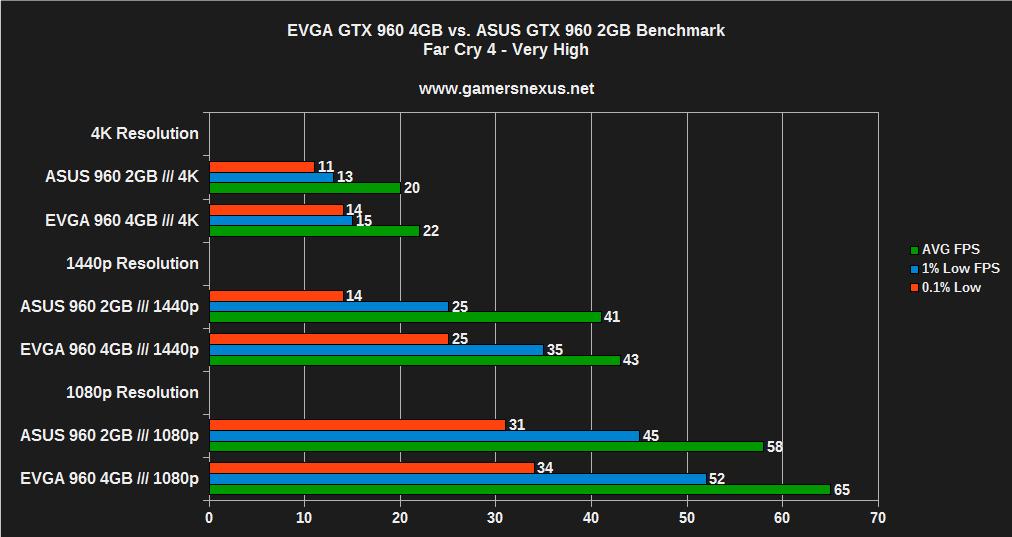 Far Cry 4, also a Ubisoft game, has a far less exciting chart. The 4GB model doesn't have as large of an impact on average FPS at any of the posted resolutions and is low-performing enough to be irrelevant at 4K. We saw a 52% gain in 0.1% low performance using the 4GB card at 1440p (Ultra), decreasing jarring frame drops substantially and improving overall fluidity of experience.

It should be noted that even at 40FPS, Far Cry 4 isn't particularly enjoyable; we'd have to drop the settings closer to “very high” or “high” to be happy with performance, as the game plays best closer to 50-60FPS. The chart still reflects relative performance gains of 4GB over a 2GB unit.

At 1080p, performance is high enough with each card that memory capacity shouldn't necessarily be a driving purchasing factor. 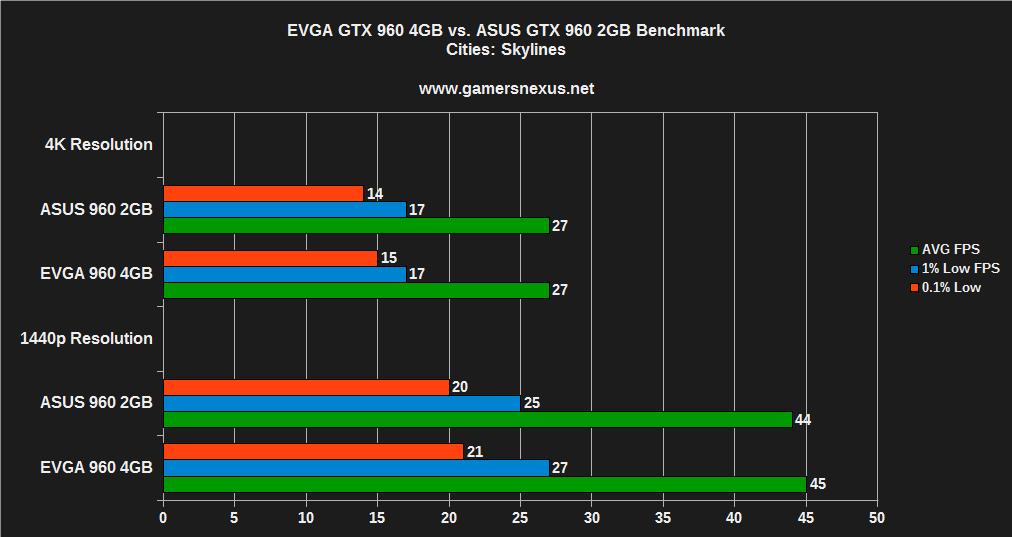 We loaded the GTA: Los Santos user-created map for Cities: Skylines testing, producing an easily replicated flyover of the city for testing.

Performance at 4K and 1440p were effectively identical with each card, making little argument for the extra expense of the 4GB card. Cities: Skylines simply does not use enough memory for memory capacity to see relevance, even at higher resolutions. Performance exceeded 60FPS average at 1080p. 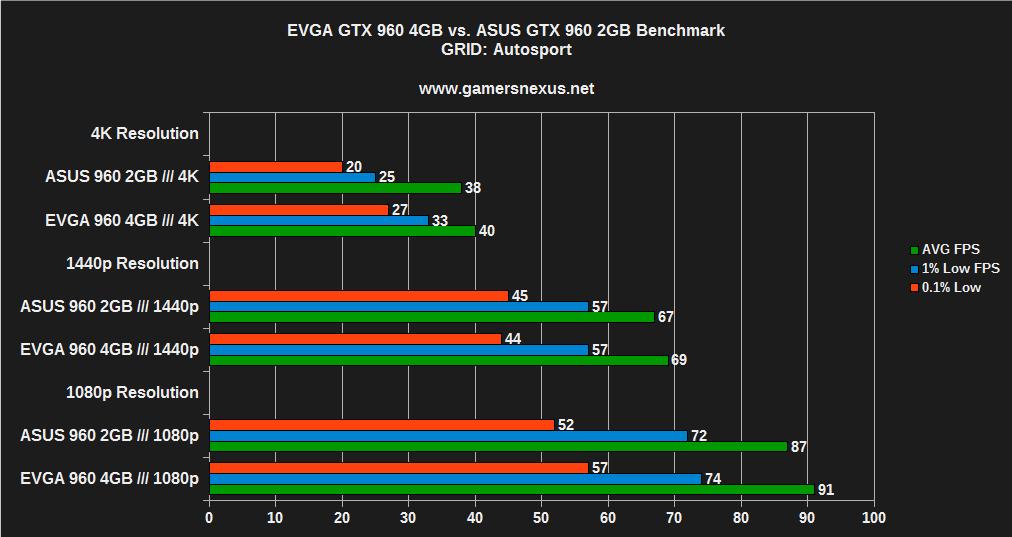 GRID: Autosport featured largely similar performance to Cities, although 4K performance did have marginally less severe 0.1% spikes. Even at 4K resolution, as above, there is very little argument for the 4GB model. 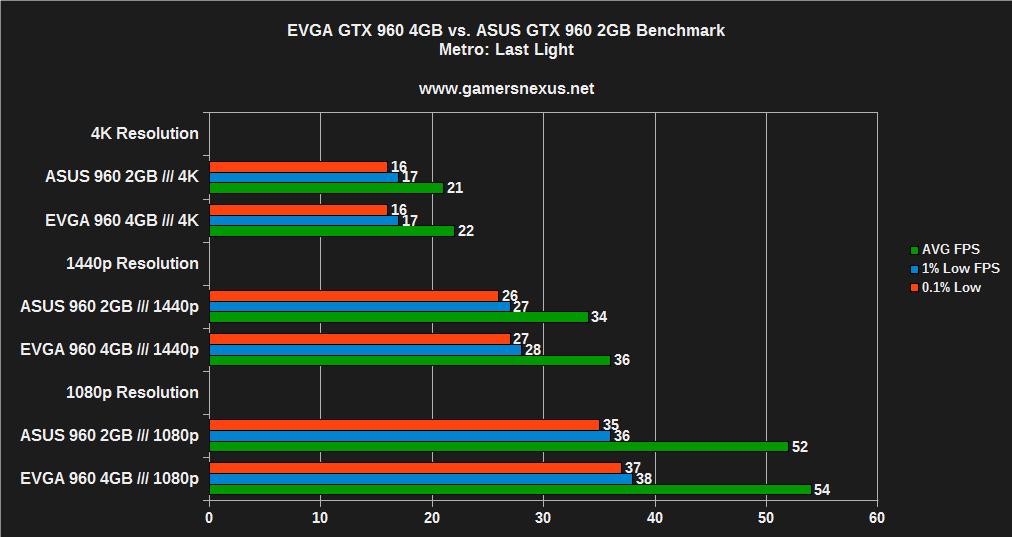 Note that Metro: Last Light is so heavily optimized for benchmarking (on the software and driver sides) that it is our most reproducible test on the bench, but doesn't necessarily show hardware advantage in these scenarios. Using various settings (defined in the methodology above) and resolutions, Metro: Last Light sees absolutely no benefit of a 4GB video card. 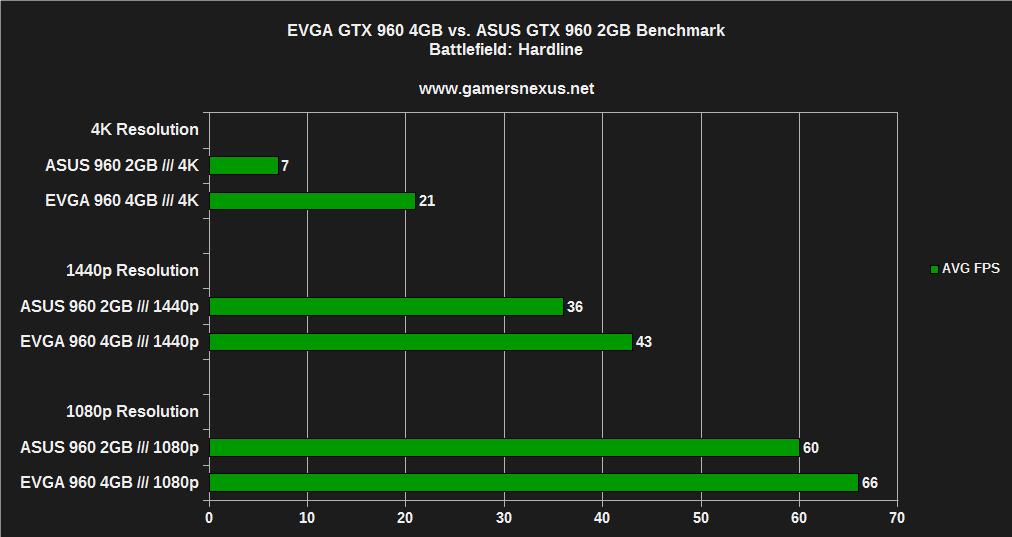 Battlefield: Hardline did not accept FRAPS input, so we used MSI Afterburner for FPS logging. BFHL saw a massive performance disparity at 4K, though each card remains unplayably slow at such a resolution. With tweaked (medium-high) settings, the 4GB card would achieve a playable FPS sooner than the 2GB card at 4K resolutions.

1440p gains are noticeable at times of FPS spikes when using the 4GB card, though both devices perform relatively well at 1440p with Ultra settings. 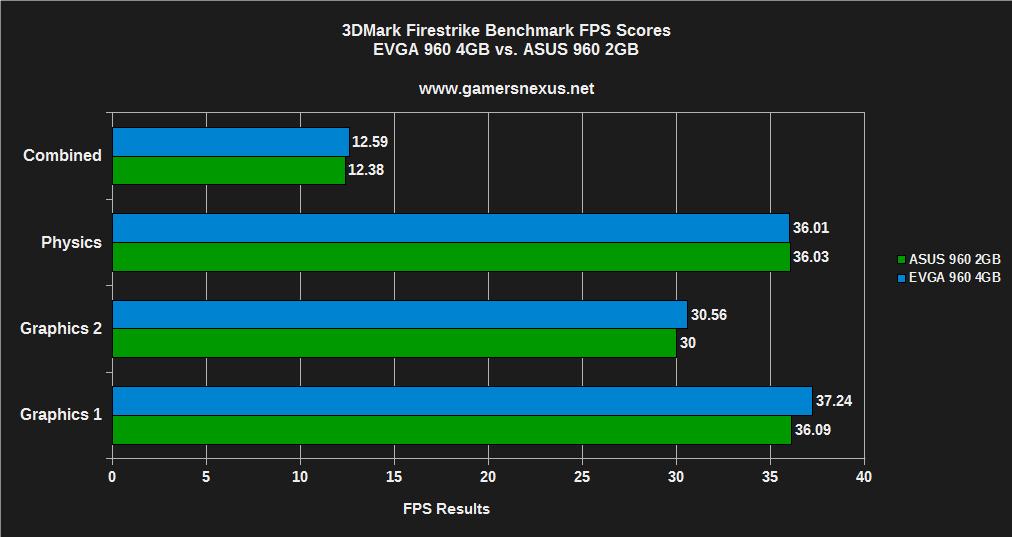 This test used 3DMark's Firestrike for testing, a utility we recommend to system enthusiasts. 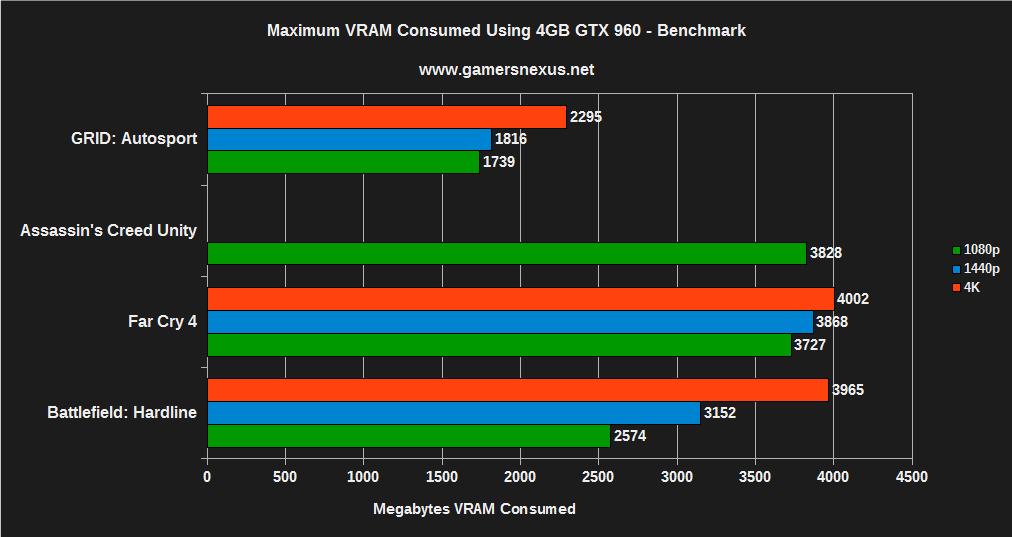 This chart shows VRAM consumption of a few of the more intensive games above. We placed GRID on the chart to show its scaled memory consumption based upon resolution. We have not yet tested BFHL, ACU, or FC4 on our Titan X, but will soon do so to see whether memory consumption exceeds 4GB.

Conclusion: Will Games Use a 4GB GTX 960 Graphics Card?

The answer to the “is a 4GB video card worth it?” question is a decidedly boring “it depends.” As above, some games – like ACU – will actually make noteworthy gains with additional memory, while others are completely disinterested in the added capacity. For the most part, games are either optimized in such a fashion that additional VRAM offers no net gain or consume low enough capacities that it is largely irrelevant.

In the few above cases where an added 2GB vastly improves performance, it may be an arguable case that users instead invest in a higher-end GPU altogether, though that becomes a cost analysis argument that is based on the buyer's budgetary situation.

The 4GB GTX 960 ($240) can see noticeable, massive performance gains in the right situations. If you're playing the games that would see advantage from a 4GB card, it's worth considering an additional $30 for the purchase. For those who are interested in less demanding or better optimized titles (Metro, GRID), like some of those tested above, a 2GB Strix card ($210) sees effectively identical and impressive performance compared to the 4GB card.