For a bit of back story, AMD has already publicly stated that its pump whine issue has been resolved for production units – which we possess – and should be absent from cards going forward. No timeline has been stated for when the pump change will be enacted.

Here is AMD's statement dispatched to the press prior to review embargo lift:

“In regards to the 'pump whine,' AMD received feedback that during open bench testing some cards emit a mild 'whining' noise. This is normal for most high speed liquid cooling pumps; usually the end user cannot hear the noise as the pumps are installed in the chassis, and the radiator fan is louder than the pump. Since the AMD Radeon R9 Fury X radiator fan is near silent, this pump noise is more noticeable.

The issue is limited to a very small batch of initial production samples and we have worked with the manufacturer to improve the acoustic profile of the pump. This problem has been resolved and a fix added to production parts and is not an issue.”

In all of the testing conducted by other outlets, we have yet to encounter a Fury X vs. 980 Ti Hybrid acoustics benchmark that directly pits liquid-cooled cards against one another. That's where our testing started off, later adding-in a reference 980 Ti for perspective.

Let's get to the testing. 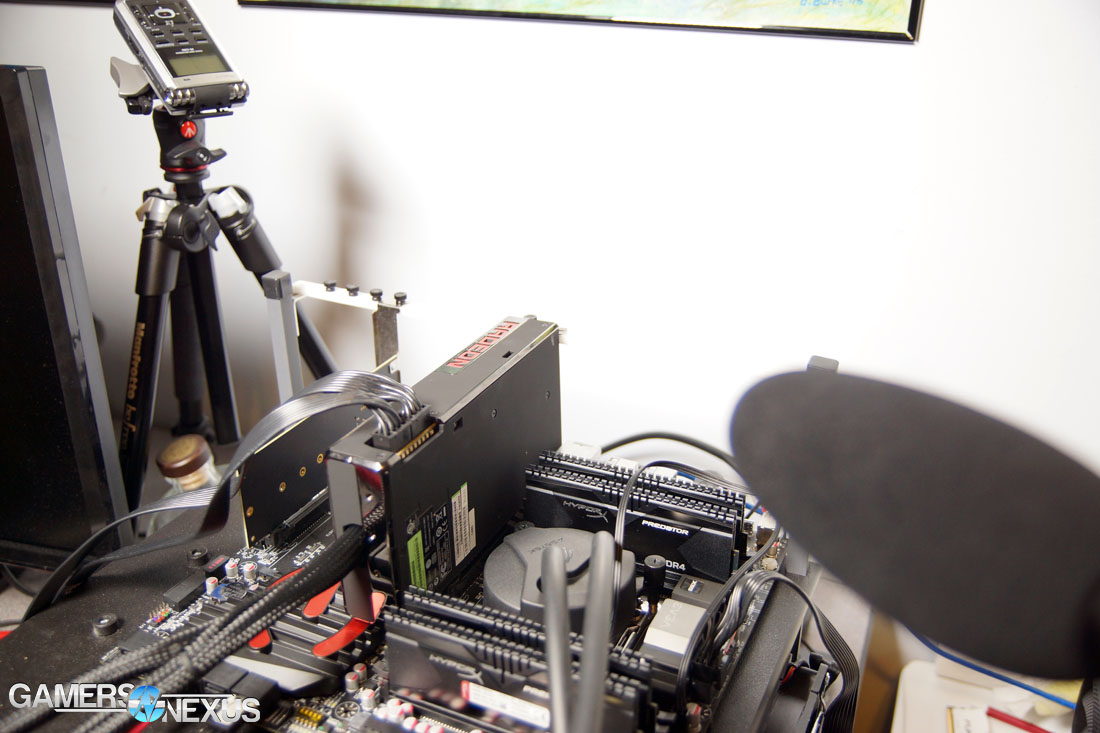 Acoustics testing requires stricter environment controls than any other tests we perform. All ambient sources of noise must be removed from the environment. For purposes of this testing, we powered-down all devices not under test in the room, turned off AC, and disconnected bench fans that were not mission-critical. The only fans left enabled were for the radiators and video cards (where applicable). Solid-state drives are used exclusively on our bench to eliminate hard drive vibration and spindle noise.

A reporter-class Roland R-05 recorder was mounted atop a tripod positioned precisely 11.5” away from the system. The recorder was positioned at a 45-degree angle above the video cards, with the recorder pointed down toward the center of the card – where the pump resides. The R-05 was left in this position, untouched, throughout the entirety of the test process, including during video card swap-outs.

A rough one-foot distance from the DUT (device under test) is necessary for user representative acoustics data. We also tested with a sensitive microphone mounted atop the memory for a 1.75” distance from the AIB, but the results of such a close measurement are in no way representative of what an end user would encounter, even on an open bench. This would be the equivalent of placing your ear against the backplate of the video card (do not do this). The additional layer of audio logging was used as a means to validate our own testing and offer redundancy. The proximity allowed us to hear the actual liquid exchange within the chamber of the 980 Ti Hybrid, which is more of a curiosity than an actionable dataset. This will be played-back in our next YouTube video.

A third microphone (Sennheiser MKE600 shotgun) was mounted to our Canon XA20 at 11.5" from the rear of the video card. Note that these additional two microphones were used during analysis to determine if the noise was worse from any particular direction; they were also used in the event that one microphone struggled to pick-up the audio. Ultimately, all charts below were generated using data from the R-05.

We tested the following cards:

Acoustics logs were dumped into Audacity and validated in Adobe Soundbooth. We then used a frequency spectrum analysis tool to map the dB levels against the frequency range. Note that the R-05 uses various hi- and low-gain hardware and software switches to improve pick-up.

3DMark Extreme was run on loop to provoke the whine.

The EVGA 980 Ti Hybrid is the key differentiator for this benchmark. Both the Fury X and 980 Ti Hybrid utilize CLCs for thermal dissipation, but execute their cooling solutions in a markedly different fashion.

In the case of the R9 Fury X, AMD liquid cools its GPU, high-bandwidth memory (VRAM), and VRM with a Cooler Master CLC, defined here. The EVGA GTX 980 Ti Hybrid uses an Asetek-sourced CLC to cool the GPU, but combines (see: “hybrid”) a blower fan and alloy heatsink for VRM and VRAM cooling.

Cooler Master's CLC uses FEP tubes – more rigid and plastic in design, but capable of insulating liquid for lower thermals – while Asetek's solution deploys rubber tubing. FEP tubes are less pliable than the rubber alternative and can crack when kinked or bent with great enough torque. Unlike the EVGA / Asetek solution, this is not coupled with a more traditional on-card air cooler. The EVGA unit is still considerably quieter and cooler than a 980 Ti reference cooler and, given its reliance on liquid, deserves to be checked for whine in a similar fashion to AMD's Fury X.

The R9 Fury X indisputably outputs a high frequency whine, but its impact on real-world use is yet to be discussed. Ignoring the user impact momentarily, we can confidently state that the whine exists observationally and objectively. Fury X #1 heavily favors the 20KHz frequency range – which coincides with the irritating pitch experienced on an open bench – with Fury #2 showing spiked crests across the spectrum analysis. The peaks are generally greater with our first retail Fury X and significantly greater toward the high-end of the spectrum.

The GTX 980 Ti Hybrid has softer crests and edges away from the higher frequency range, but still produces whines that correspond to performance, as picked-up by the acoustic devices. 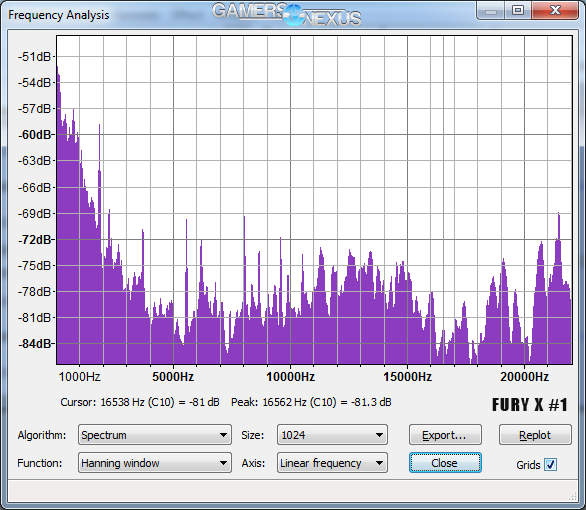 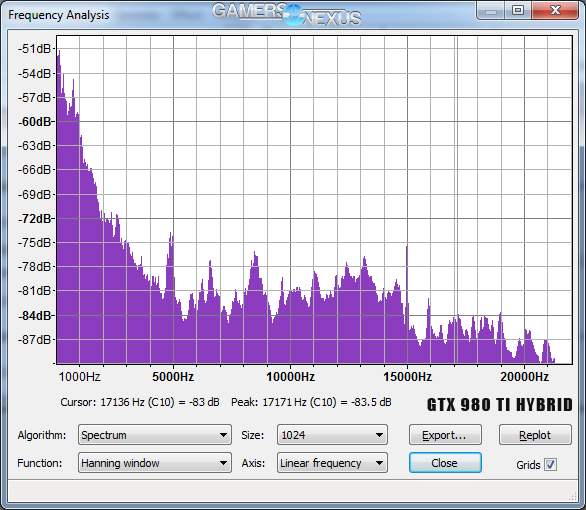 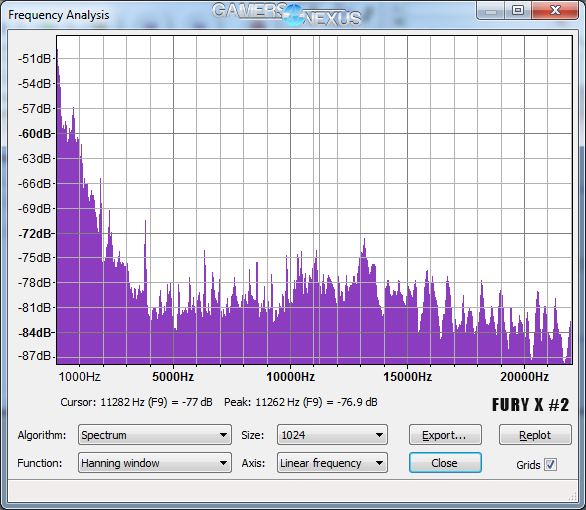 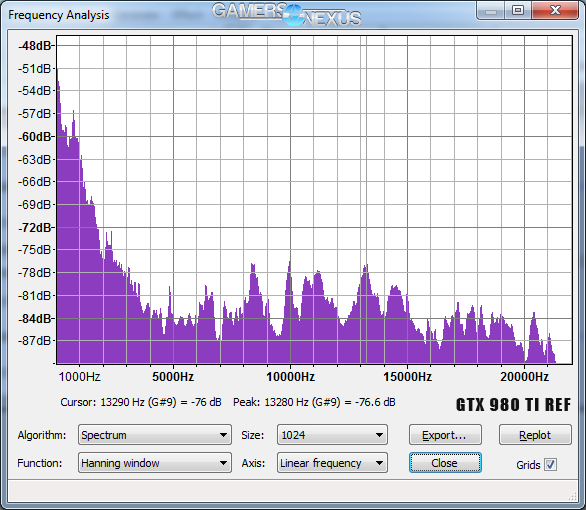 Decibel levels marginally favor the Fury X when tested at an 11.5” distance, given the blower fan's presence on the 980 Ti Hybrid. The volume is similar on both devices; the Fury X's whine does not emit at a volume level measurably higher than the Hybrid's dB measurement.

Both cards will be inaudible in an enclosure. The noise of system fans, the PSU, and the CPU cooler will overpower the GPU cooling solution. This is especially true if rear-mounted (farther from the user), which seems likely given tube length restrictions. Any user purchasing a $650 video card is likely to buy a case with some level of quality control allocated toward noise control, further enforcing that most users will not hear the noise. 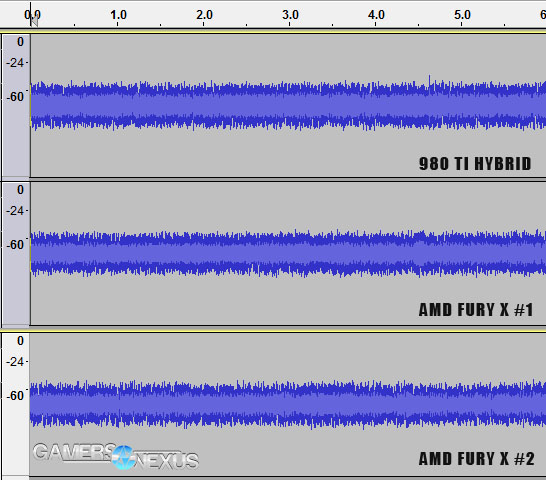 There is no doubt in the testing that the Fury X factually exhibits more erratic cresting with expressed favoritism toward higher frequency ranges, fairly classified as “whining.” Of that we are certain. Similarly, there is no doubt that the 980 Ti Hybrid exhibits its own humming, but does so with a lower frequency output.

Ultimately, we feel that AMD is correct on this matter: The Fury X, when installed in an enclosure, is effectively inaudible to the end user. We tested this in a spare Rosewill Throne and NZXT H440 and were unable to hear the whining from a ~3ft distance (head to enclosure). Users who do intend on installing the Fury X in an open-air enclosure – like a test bench or, for example, the old Antec Skeleton – should note that the whine will likely be audible and could be irritating.

Of note, we also discovered that our units seem to whine audibly almost exclusively when under gaming loads. The pump whine corresponds with load levels on our devices.

It is our conclusion that this is a non-issue for nearly all real-world use case scenarios where the card would be utilized in an enclosure not located immediately adjacent to the user's head. AMD has stated that it already issued a fix to retail cards, but we can definitively state that our retail cards do not possess this fix. For buyers who seek certainty that their Fury X will not exhibit pump whine, we'd recommend holding off until the next batch of cards hits retailers. In the meantime, unless some other failure exists resultant of the pump whine – something we wouldn't see until further endurance testing – we'd advise that most users do not let the whine alone keep them away from a purchase. If AMD's word holds-up, the immediate future should yield devices with no pump whine whatsoever, but we may not be able to validate this. The 980 Ti Hybrid emits a low hum of its own that is only audible on an open bench at nearly the same dB level, but without the high-pitched whine. We felt confident recommending that for its noise levels, and we feel the same for the Fury X and its noise levels (in an enclosure).

Please note that this article strictly evaluates the cards based on noise levels and does not consider the critical performance side of a purchase.